Required reading in the Year of Trump: Winners, losers and the portrait of a town in decline 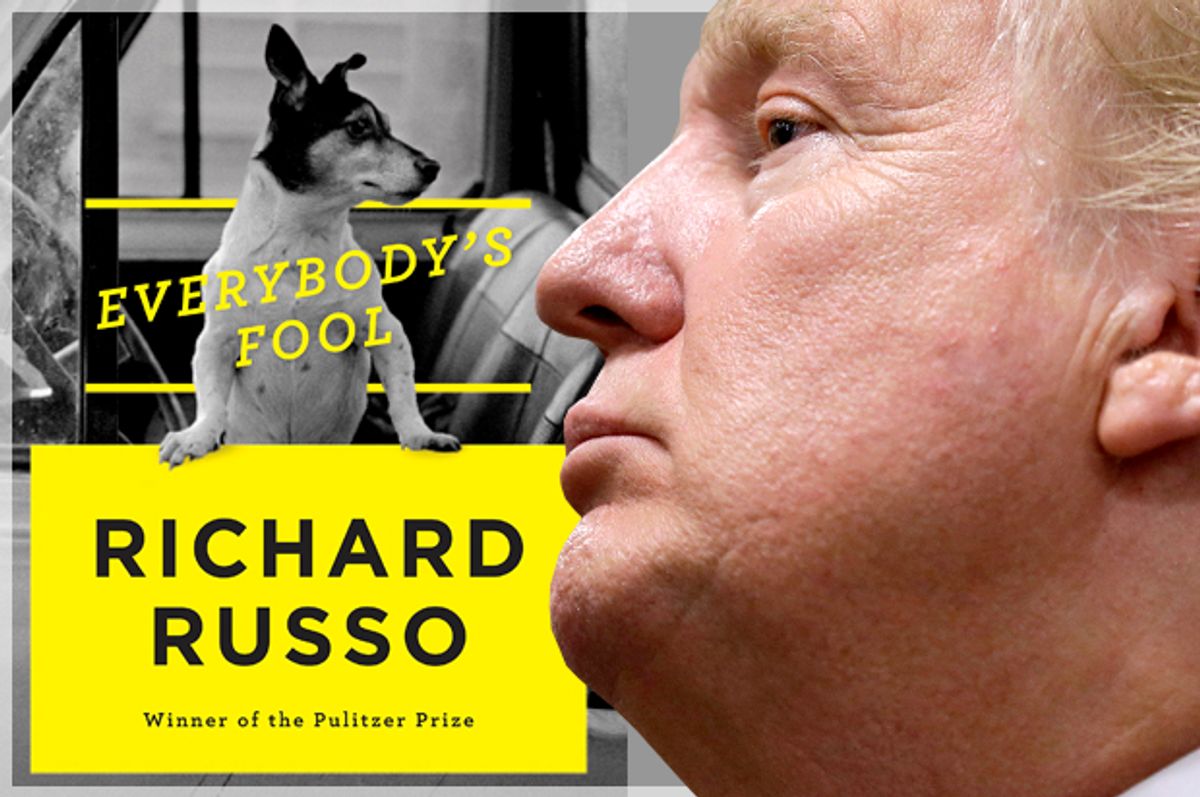 Anyone who doubts that literature still presents the finest exploration of humanity and the “greatest opportunity for moral inquiry,” to use a phrase from Christopher Hitchens, need only begin with Richard Russo’s new novel, "Everybody’s Fool."

In the loose sequel to "Nobody’s Fool" – a powerhouse of poignancy adapted into a film starring Paul Newman – Russo returns to the upper state New York of his upbringing and artistic formation. Russo owns the storytelling territory of small town America, especially in the Northeast, with the same authority Faulkner owned Mississippi and Chandler owned Los Angeles. Because his best work takes place in Provincial America, critics often claim that his subject matter is “place.” Russo once corrected the record by explaining that he uses “place” as a navigation tool to actually survey and write about his real subject: class.

Of course, like any great artist, his work is not about one thing, but about a multitude of topics. In "Everybody’s Fool," Russo gives readers a second tour through North Bath, and its regional distinctiveness is as identifiable as its sociopolitical status as inferior misfit and object of derision from the neighboring resort town, Schuyler Springs. The tension between the two towns – one clearly on the winning end of American economics, and the other on the losing side – is a larger manifestation of the resentment that exists between various residents of North Bath. The conflicts that arise out of this current of hostility provide the making of a half-plot, which forms from occasional incident more than device and structure.

Russo has often said that there are two types of stories: plot-driven and character-driven. He writes character-driven stories, and through his assortment of fascinating and flawed characters, he offers inspection of the intractable contradictions inside the human heart.

In "Everybody’s Fool," these characters include Sully, the picaresque hero of "Nobody’s Fool," Carl Roebuck – a self-destructive, abrasive, but somehow redeemable heir to a construction company, Ruth – the owner of the town’s favorite diner, Ruth’s daughter Janey, and a new protagonist – Douglas Raymer, the bumbling but lovable chief of police. Raymer's assistant, Charice, is one of the town’s few black residents. She and her brother Jerome, also a police officer, are two of the novel’s most enjoyable and substantive characters. There is an element of racial humor, mostly emanating out of the benign but tone-deaf awkwardness of Raymer around his smarter and tougher assistant as he, almost in spite of himself, falls in love with her.

Raymer was a minor character in "Nobody’s Fool," and Russo found inspiration to make him the main character in "Everybody’s Fool" after hearing a true story about a police officer in a small town who upon discovering a garage door opener in his wife’s car that did not work on their own home, drove around town, pushing the button, hoping to ascertain the identity of his spouse’s secret lover. “Who is dumb enough to do something like that?” Russo asked himself, and realized that he would have to provide an update on the imbecilic, but kindhearted police officer from "Nobody’s Fool."

In addition to becoming, against all the odds, Chief of Police, Raymer has also said goodbye to his recently deceased wife. Mere hours before she died, she announced that she was leaving him. He finds the garage door opener in her car, following her funeral, and becomes obsessed.

Russo is one of America’s great humorists. His novels often rely on the absurd and comic to give glimpse into the souls of his characters. Raymer’s grief is real, but his struggle with the garage door opener often seems silly. The honest and realistic reader must ask, however, who among us has not descended into the silly under the erroneous rationalization of self-importance?

That question, depending on the answer and the framing of the answer, can harvest hope or despair. It is this conflict between cynicism and optimism that rests at the heart of Russo’s fiction, and animates "Everybody’s Fool."

Russo’s position on human nature is never quite clear, as he, perhaps, through the vehicle of his characters, oscillates throughout the novel. Characters go to dark places, but in the tattered town of North Bath – on the edge of economic extinction – they also find ways to assemble for ambitions larger than their own self-interest.

It is clear that Russo maintains sympathy for small towns in decline. Shifting economic conditions and cuts to state budgets for social services are always in the background of Russo’s novels, and Russo has become an advocate for public libraries and independent booksellers, but he never falls into the tempting pit of sentimental delusion. The knockout punch hit Bath’s jaw when a banker rounded up a large group of local investors for an amusement park he convinced everyone would resuscitate the town. When the developers selected another city, the banker bailed on everyone – escaping in the middle of the night to never return.

Because Russo is from a small town in upper state New York, he understands that there is no excuse for the ignorance and racism that often thrives in those towns. The villain of "Everybody’s Fool" is a high school dropout who refuses to work and has resorted to petty crime to care for himself. He also beats women, including his wife and mother-in-law, as a habit. Another character, Joe, is so stupid that while blaming Latinos for his own financial challenges, he cannot even correctly pronounce the word “Hispanics” (sound familiar?).

Roy and Joe – and the millions of people they represent – do not complete the picture. Alongside the ignorance and hatred, there exists nearly indescribable decency, compassion, and kindness.

Sully is as independent as a stray cat, and while there is much to admire in his unbreakable spirit, he is also emotionally dysfunctional. Raymer is the opposite. While Sully always seems to know what to say and how to escape the clutches of responsibility and accountability, Raymer can barely put on his socks in the morning without creating a crisis, and in one of the many laugh out loud passages of the novel, he falls face first into an open grave during the funeral service for a judge who once called him a “moron.”

What brings the two characters together – despite their status as friendly rivals – is a code of honor for their neighbors; allies and enemies alike. Raymer commits himself to the right course of action without fail, even if his tactics almost always fail. Sully is full of regret for the neglect of his son, and his aging ex-wife who suffers from dementia, but he always searches for any opportunity to etch out a little redemption.

"Everybody’s Fool" ends with hope, but it is the hard earned hope of moral and psychological combat.

The world of North Bath is so brilliantly drawn that it almost becomes physical in the room of the reader, and when the reader visits that world the most palpable truth is that celebrating the power of connection. For all the foibles and failures of human nature, people are at their best, and life is at its most hopeful, when they connect with one another. Russo is not naïve. He knows it is a challenge – often an excruciating one – to join together with others, but it is the only possibility for beauty in each separate individual’s short life.

The real hero of both "Fool" books is an English teacher – retired in the first novel, deceased in the second – who once asked Sully, “Do you ever regret not doing more with the life God gave you?”

“Not often. Now and then,” Sully answers with a smile.

Miss Beryl – a woman who always saw the best in her students and encouraged them to see the best in each other – haunts the book with her resolute goodness. As if it were an old lesson plan, she continues to remind the characters that if they want to reduce their regrets, and enhance their pride, they must behave with civility and love for another. She would often write, “Who is Douglas Raymer?,” on Raymer’s book reports and papers. Her inquiry was meant to provoke her student to develop a stronger authorial voice and perspective, but it eventually doubled as the question into identity that everyone – in the quiet of the evening, in the madness of the morning rush – turns on themselves.

Raymer begins to piece together an answer only after he falls in love, and starts to give love.

"Everybody’s Fool" does not equal the emotional might of "Nobody’s Fool," or what Russo once called his “most visceral book,” "The Risk Pool," but it possesses elegance and wisdom worthy of study in the millions of Baths across the world.