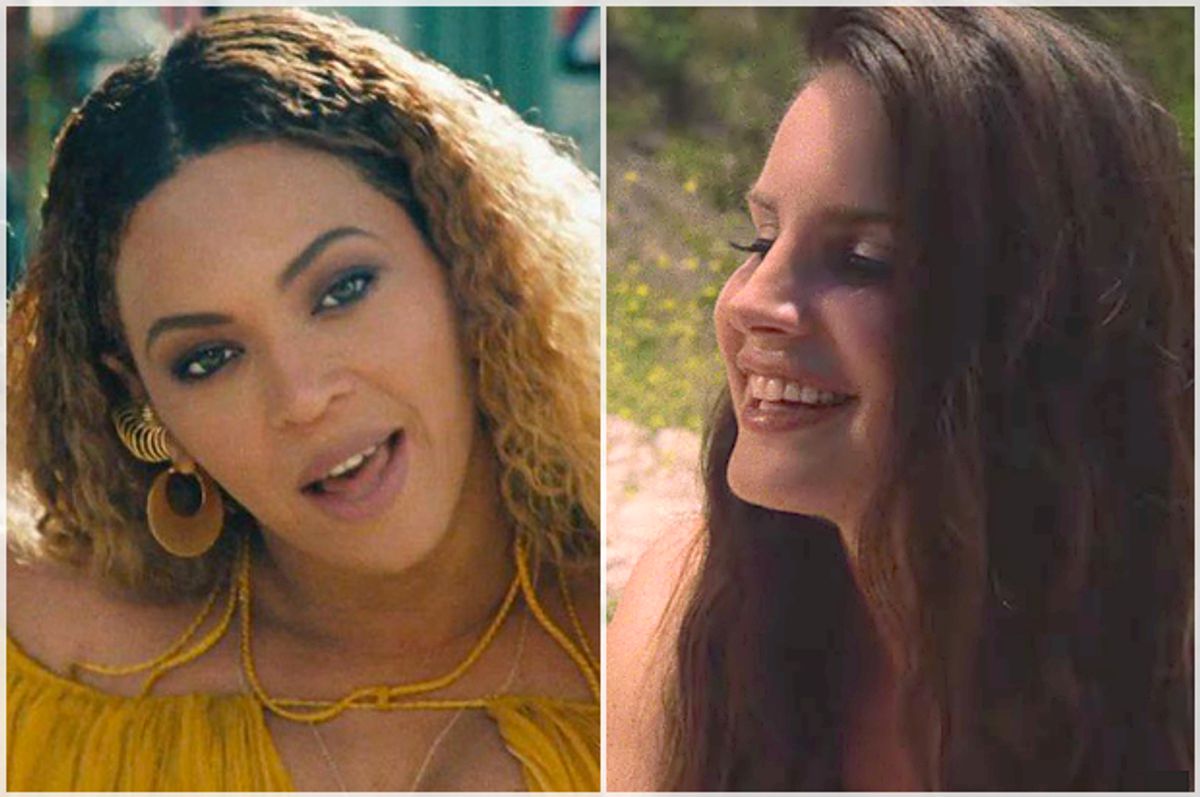 Jennifer Lopez’s latest video is, on paper at least, a riveting feminist manifesto. “Ain’t Your Mama” features an angry and empowered J-Lo who urges her female listeners to demand respect. Throughout the video, Lopez plays a variety of stereotypical female roles--the doting housewife, the dedicated secretary, the high-powered businesswoman who just can’t get ahead. In each scene, the different characters cast off the shackles of the patriarchy, by dumping food on husband’s heads, throwing papers about and shouting out windows.

“Ain’t Your Mama” is really catchy (plus it’s fun to see J-Lo show off her Rubik’s Cube-solving skills) but also highlights how feminist empowerment pop songs have become more corporate than counterculture. As Kate Dries points out for Jezebel, the video itself is rife with product placement, though this didn’t seem to bother Hillary Clinton or Gloria Steinem, both of whom tweeted their support for the video’s message (and expressed their gratitude for having parts of their speeches included in the song).

In some ways, “Ain’t Your Mama” is a throwback—the late '90s and early 2000s were filled with similar anthems of girl power— from No Doubt’s “Just a Girl” to Christina Aguilera and Lil’ Kim’s “Can’t Hold Us Down” to Ciera’s “Like a Boy.” The lady power anthem follows a classic pattern, with the singer lamenting sexism and then vowing to overcome with her squad in tow. Peppy and ineffective, the lady empowerment anthem needs the omnipresent patriarchy to sing about, and is thus less invested in equity than the feeling of being empowered.

The most interesting female artists today are pushing away from “girl power” for something more interesting—vulnerability. For the past few years, two of the most interesting and different artists, Beyoncé and Lana Del Rey, have released albums that unabashedly reclaim the love story as a fertile ground for asking existential questions, not just about what it means to be a woman in the world, but also what it means to be a person. In “Honeymoon,” Del Rey considers the warm afterglow of love as an experience of desperately trying to cling to something that is already dying, and in “Lemonade,” Beyoncé reflects on her own marriage and the threat of infidelity as a means to explore black female identity. In both albums, the lyrics directly address men—lovers, fathers, brothers, friends—while the visuals overwhelmingly focus on female beauty, friendship and solidarity. In “Honeymoon,” long-haired nymphs playfully float through water; in “Lemonade,” beautiful black women of all shapes and shades hold hands and walk together.

This juxtaposition of visuals of female solidarity and lyrics of very traditional romantic longing offers a very different feminist story than the ones that pop stars typically capitalize on, eschewing feel-good slogans for an in-depth exploration of the ways the personal is political. Some of these scenarios are uncomfortable in their honesty—throughout “Born to Die” and “Ultraviolence,” Del Rey is captivated by beautiful men, who cause her pleasure and pain, sometimes at the same time. In “Honeymoon,” Del Rey goes further in exploring her personal experience of depression and how her relationships with men do the opposite of reducing her to an object—they help her to actively see herself. Likewise, one of the powers of “Lemonade” is that Beyoncé inhabits a range of emotions beyond her typical power pose—from rage to deep sorrow to tenderness. The Beyoncé who sits outside on a porch surrounded by a sisterhood is an even more potent symbol of strength than the silhouette of Beyoncé up against an all-caps feminist sign. If “Lemonade” is about women coming into their power, it’s about a more nuanced journey.

Both Del Rey and Beyoncé have historically been criticized for centering the male gaze in their work. Del Rey’s song, “Video Games” was lambasted by some for her passive fixation on hanging out with a boyfriend. Likewise, Beyoncé’s use of sexuality in songs like “Partition” and her “Mrs. Carter Show World Tour” are alienating to some feminists who want Beyoncé to stand proudly without her husband’s name.

In Claire Vaye Watkins’ now famous essay “On Pandering,” Watkins actively laments how she spent large swaths of her life watching boys and men do things:

Watkins’ anxiety about this type of watching comes from her sense that her reasons for watching were that she somehow valued what boys were doing more so than what girls did. By the end of her essay, Watkins urges women to throw off the shackles of a culture that values the male experience more than the female experience: “Let us use our words and our gazes to make the invisible visible. Let us tell the truth.”

For some feminists this “truth telling” is predicated on de-centralizing the male experience. The “Bechdel Test,” for example, which has become the go-to means for evaluating whether or not a film is feminist, looks at the ways the ways that female characters interact with men. The test, named after cartoonist Alison Bechdel, puts forth three simple criteria: that the fiction or film offer 1) at least two female characters who 2) talk to each other 3) about something other than a man.

One of the major problems with this criterion is that it automatically dismisses many heterosexual female love stories as being meaningful. At its worst, it suggests that women interested in writing about men are, to use Claire Vaye Watkins’ language, pandering to the status quo.

Yet one of the glories of Lana Del Rey and Beyoncé’s latest albums is how they position the heterosexual female love story to be worthy of not just consideration, but actual glory. For both Del Rey and Beyoncé the experience of living with, loving, and coming to terms with men in their lives has been an avenue for self-discovery and transformation. Both albums centralize female storytelling as a means to truth—the men they meet along the way are simply part of that becoming.