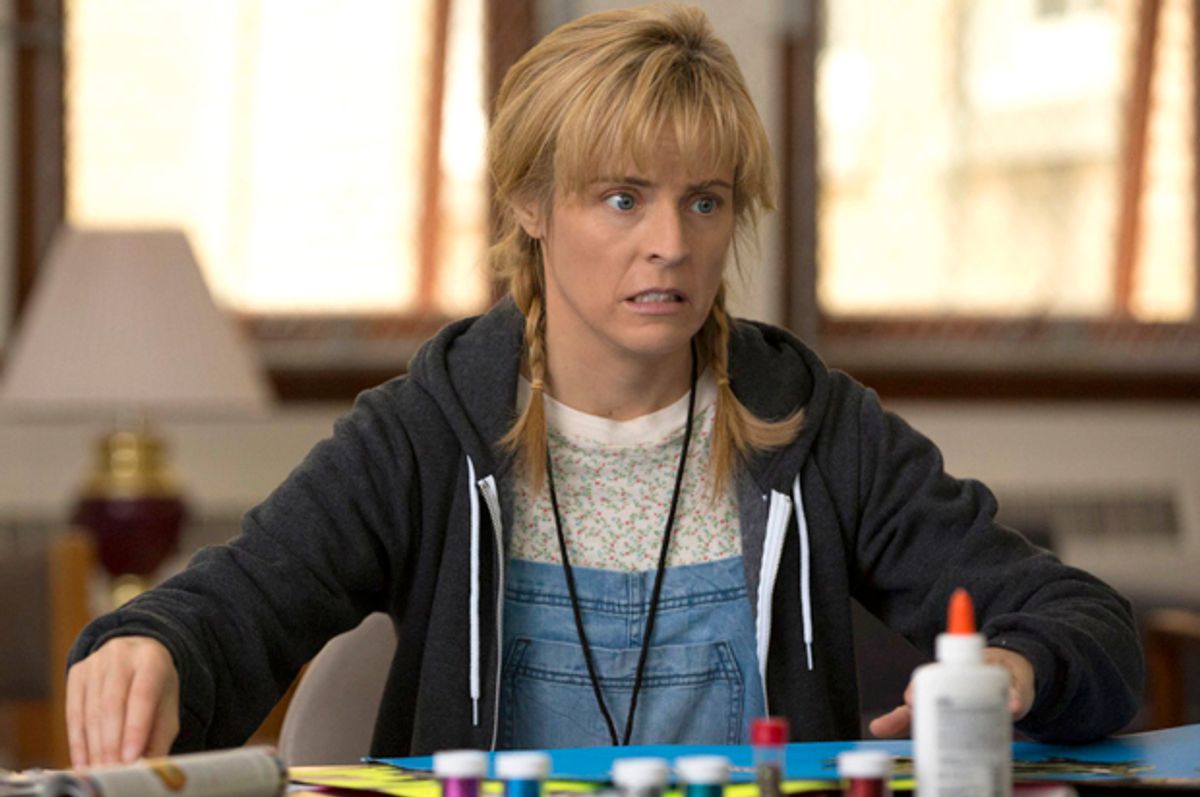 It’s difficult to describe “Lady Dynamite,” but the most important thing to know about it is that it is okay if, midway through the pilot, you have absolutely no idea what you’re watching. The first episode of the comedy starts with star and executive producer Maria Bamford speaking directly to the camera, in what might be the beginning of a rom-com and might also be a shampoo commercial. But the segment keeps going, whatever it is, defying the viewer’s expectations of what it’s supposed to be in the process. First she’s swinging her hair and letting go of balloons; then she’s driving in a convertible, backwards, with two pugs. The world gives her flowers, a bike, and gorgeous hair; then it’s asking her what she’s doing when she’s running her hands repeatedly over the vegetables, smiling, like a maniac, into the camera.

The scene is an elongated wormhole of comprehension, where the arranged visual and auditory cues mean things individually but then cease to make sense when strung together—a journey reminiscent of “Too Many Cooks.” She is interrupted from her visions of gorgeous hair to one where she’s a disheveled woman standing in front of a grocery store advertisement. An annoyed crewmember asks her what she’s doing, because she’s supposed to be working on her own show. “I have a show?!” Maria asks. Then she turns back to the camera and smiles, the background music once again piping in. “What a great late-in-life opportunity!”

It’s not exactly a journey the viewer’s on; it’s more like a trip. “Lady Dynamite” is quite a trip. The pilot is extraordinary in how much it asks the viewer to just go along with it—its presuppositions and character sketches, its sense of time and space and linearity. Bring along too much baggage and it’s an unpleasantly disorienting ride. I surmise that one of the reasons the pilot is so particularly herky-jerky is because Bamford and “Lady Dynamite” co-creators Mitch Hurwitz and Pam Brady want to make very clear right from the get-go that this isn’t going to feel like watching other comedies, even our very hippest.

Bamford herself is the source of most of the show’s offbeat charm; a veteran of the Los Angeles comedy scene, she’s done stand-up, voiceover work, and once, a semi-viral Target commercial. She’s also struggled with and joked about mental health, including her diagnosis of bipolar II, suicidality, and obsessive-compulsive disorder. She’s an incredible, brilliant performer, earthy and flighty and warm and standoffish all at once.

Don’t just take it from me. In my interview with Hurwitz, creator of “Arrested Development,” the executive producer and co-creator of “Lady Dynamite” could not stop gushing about Bamford—her genius, her humor, her incredible thoughtfulness and constant drive to improve herself. He was so taken with her talent that he sought her out, first to cast her in season four of “Arrested Development” and then to see if she wanted to create a show. (Bamford isn't showrunning, either; co-creator and EP Pam Brady is heading up the writers' room.) Hurwitz calls Bamford's stand-up act “a kaleidoscope,” and that’s an apt metaphor for Bamford’s whole body of work—a lot of different clashing elements, viewed in one very specific and fragile way that turns out to yield enormous beauty.

While many prestige comedies have played with the topics and behaviors that are okay to include in comedy—such as “Girls”’ cringe-worthy sex scenes, “Louie”’s social anxieties, and the depression and addiction of shows like “Love,” “BoJack Horseman,” and “You’re The Worst”—fewer have played with more formal constraints. “Lady Dynamite,” though, is willfully experimental, meandering through fantasy and history without missing a beat. The comedy seems determined to challenge every possible structure in its narrative. The most obvious example is also the show’s major conceit; while It’s difficult enough to maintain two timelines in a story, “Lady Dynamite opts for three—two in Los Angeles, at different times, and one in Duluth, Minnesota, where Maria is living with her parents and spending her days in a psych ward. To double the confusion, the comedy does not bother to explain to you that three different timelines are occurring simultaneously; like the most successful drinking games, you have to figure out the rules as you go along.

In the kaleidoscope of transforming surroundings and detailed flights of fancy, the one constant is Bamford, a comedian with a truly gifted ability to turn humor into tragedy and back again. She’s a surprisingly physical comedian; perhaps as a result, “Lady Dynamite” is a surprisingly physical show, using manipulations of the set and the surroundings to illustrate the landscape of Bamford’s mind. The show can be hard to follow end-to-end, but in some ways, the confusion itself is bewitching; mental illness is its own difficult-to-understand house of mirrors, and Bamford’s repeated attempts to accept where she is without knowing how she got there is both a surreal quality of the show and a major life lesson in one neat plot device.

One of the reasons “Lady Dynamite” is poised to succeed for Netflix is because it is both so bingeable and so re-watchable—much like “Arrested Development,” which rewarded repeat views with even more densely packed humor. Of the four episodes sent to critics for review, the pilot is the most confusing; once you learn how to play along with “Lady Dynamite,” the episodes roll from one to the next with their own silly momentum.

With “Lady Dynamite,” Netflix is adding to its very respectable roster of comedies—“Unbreakable Kimmy Schmidt,” “Master Of None,” and “BoJack Horseman” are three of my favorite shows airing right now. The studio is not without its duds, but Netflix has found a way to nurture comedians in a way it’s failed to, largely, with drama. Witty, airy, convoluted “Lady Dynamite” is no exception, showcasing a brilliance of concept and bizarre execution that would be hard sells on many other networks.