Pundits pile on to squeeze Sanders: You must tune out the misleading post-Nevada echo chamber

The Nevada flap has given Bernie's foes ammo to claim he's in meltdown, while smearing backers as unhinged bros 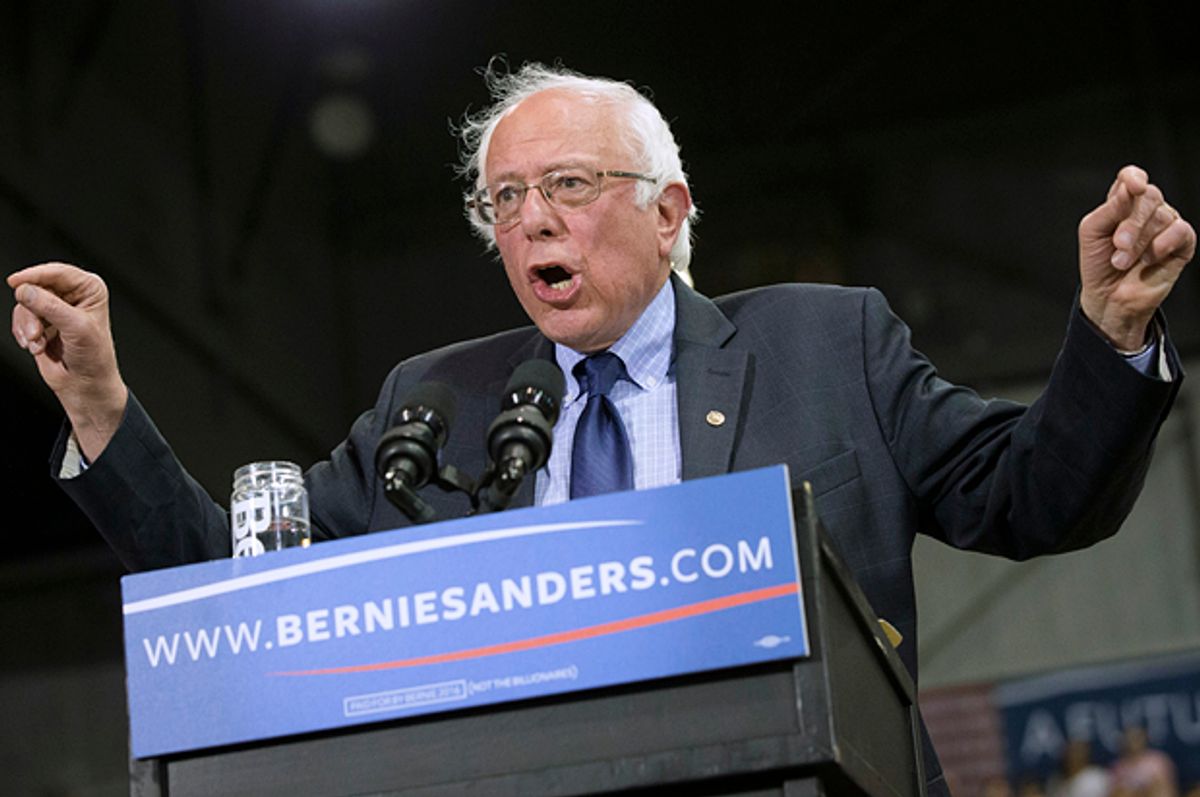 The Bernie Sanders campaign is in crisis! Or so the narrative goes. A small number of Sanders supporters lodged death threats against Nevada Democratic Chairwoman Roberta Lange. That’s abhorrent and, as recent days’ wall-to-wall reporting makes clear, not good for the Sanders campaign. Sanders condemnation of the threats, however, hasn’t stymied the deluge of stories and commentaries suggesting that he is set to run the party into electoral oblivion, that his supporters are a dangerous mob, and that, as the Nevada Democratic Party put it, the campaign is not only “inciting” violence but has a “penchant for…actual violence.”

Conflating an entire protest movement with the actions of a few is a longstanding delegitimization strategy, and protesters always look more agitated than whoever they are protesting: the establishment, after all, exercises its power from a position of power. In the current primary, the establishment has deployed this strategy ever since the first bad person who happens to support Sanders found out about Twitter.

After the Nevada incident, Jezebel’s Anna Merlan had a smart journalistic idea: pick up the phone and call the threat makers. She connected with three people. One was apologetic and felt like a jerk. Another couple, who meanly predicted that Lange would lose her job but were not accused of making threats, was not apologetic. The third person, who sent a particularly creepy text about knowing where Lange lived and who her family was, seemed like he had significant psychological problems.

The actual fracas at the Nevada convention, a fight over arcane rules and the seating of delegates that involved both sides attempting to out-game the other, highlights the frustration and anger that pervade the Sanders camp. The response to it, mournful eulogies to Sanders’ squandered promise written by people who never liked him anyway, evinces its counterpoint: the Democratic Party’s panic rising alongside its concern over Donald Trump’s swing-state poll numbers.

Generally, the tone of media coverage conveys a sense that Sanders is in some sort of meltdown. The dire words, however, are actually just bouncing out to you from an echo chamber: In reality, Sanders has been closing the gap in California and is still nipping at Clinton’s heels in national polls. He will almost certainly not win. But for an insurgent candidate who has won far more than anyone ever imagined, charging through its final month, he’s doing just fine.

A Washington Post headline blaring that “liberal allies” were “turning on Bernie Sanders after Nevada donnybrook” was a case in point for misleading reporting. James Hohmann wrote that the incident “has been a wake-up call for many liberal commentators, who have viewed Bernie positively because of his success at pulling Hillary to the left. But a new mindset has begun to take hold: If Trump becomes president, Sanders will deserve a big share of the blame.”

The “new idea” that Sanders will be blamed for a Trump victory is not, in fact, new. Rather, it’s so predictable that I already predicted it: the Democratic establishment will always try to blame the left for its problems (see McGovern, Nader and, voila, Sanders).

And those liberal allies who have suddenly gone sour? Cited figures include Dana Houle, a Clinton supporter who had criticized Sanders’ visit to the Vatican because of the role played by people who lack “communion with and allegiance to the Catholic Church” (how progressive!). And Mother Jones’ Kevin Drum who, despite writing for a magazine named for a left-wing labor radical, is in reality a longstanding Sanders critic who has charged that his social democratic spending plans are “not even remotely in the realm of reality.”

Sanders opponents in the punditocracy greatly outnumber sympathizers, and the Nevada contretemps provides the latest opportunity for them to smear supporters as unhinged bros and to browbeat Sanders into becoming a loyal Clinton lieutenant—all before Californians have cast their ballots.

Unsettling poll numbers show a strong Trump challenge in Florida, Pennsylvania and Ohio, and Democrats worry he may successfully pursue a Rust Belt strategy aimed at downwardly mobile white men. And so allies of Clinton, who just barely trails Trump in this unpopularity contest, are fixing their sites on Sanders.

More specifically, the Nevada fracas has been seized upon as a dire prelude to convention disorder in Philadelphia: Sanders, the charge goes, is dishonestly selling voters on an impossible victory and delegitimizing the process.

There will be protests at the Democratic National Convention regardless of what Sanders says. Leftist activists have long staged protests outside both major parties’ political convention. Sixteen years ago, an LAPD officer’s club cracked my rib at one of them. Whether there are major disruptions inside the convention, however, appears to be largely within DNC Chair Debbie Wasserman Schultz’s control. Making two outspoken Clinton stalwarts, Connecticut Gov. Dannel Malloy and former Massachusetts Rep. Barney Frank, chairs of the platform and rules committees, is not a signal of inclusion. It’s courting disaster.

Conspiracy theories about the election being stolen have credence among Sanders supporters. Sanders fans must accept that democratic socialism is on the rise but this year wasn’t its moment: Clinton simply won more people over this time. Pessimism of the intellect, optimism of the will. But it’s also true, generally speaking, that conspiracy theories flourish where power is perceived to be illegitimate and nontransparent. The Sanders camp won’t be disabused of the notion that the process has been stacked against him. It has been. Clinton’s aura of inevitability sometimes worked to Sanders’ advantage, allowing early victories to become major news items in part because they were so surprising. Yet overall the superdelegate-abetted Clinton coronation worked strongly against him: Democratic voters are extremely concerned about electability and most believed that Clinton, despite polling to the contrary, was the person best poised to beat Republicans.

The coming months will pose difficult challenges without easy answers. Sanders must help lead his movement through a heartbreaking loss, keeping it alive and independent while fighting efforts to frame him as a sore loser. This week’s onslaught, the ugliest of the primary, are just a taste of what’s to come if he maintains any sort of critical distance from Clinton during the general election. That said, there’s no indication or evidence that the media’s concern for Sanders’ future is in any way shared by his followers.

Sanders has a lot of responsibility. But not in the way the establishment thinks. Sanders can’t make anyone vote for Clinton. She is the one who has to win them over. If pivoting toward the general election means the DNC insulting Sanders supporters and the Clinton campaign constantly telegraphing to reporters that they plan to take Sanders fans for granted, then she will have a harder time doing so.