Economic inequality, the toil of work and Wall Street power: Our capitalist society is like "The Matrix"

We live in a dystopia worthy of a Hollywood sci-fi movie, and most people don't even realize it 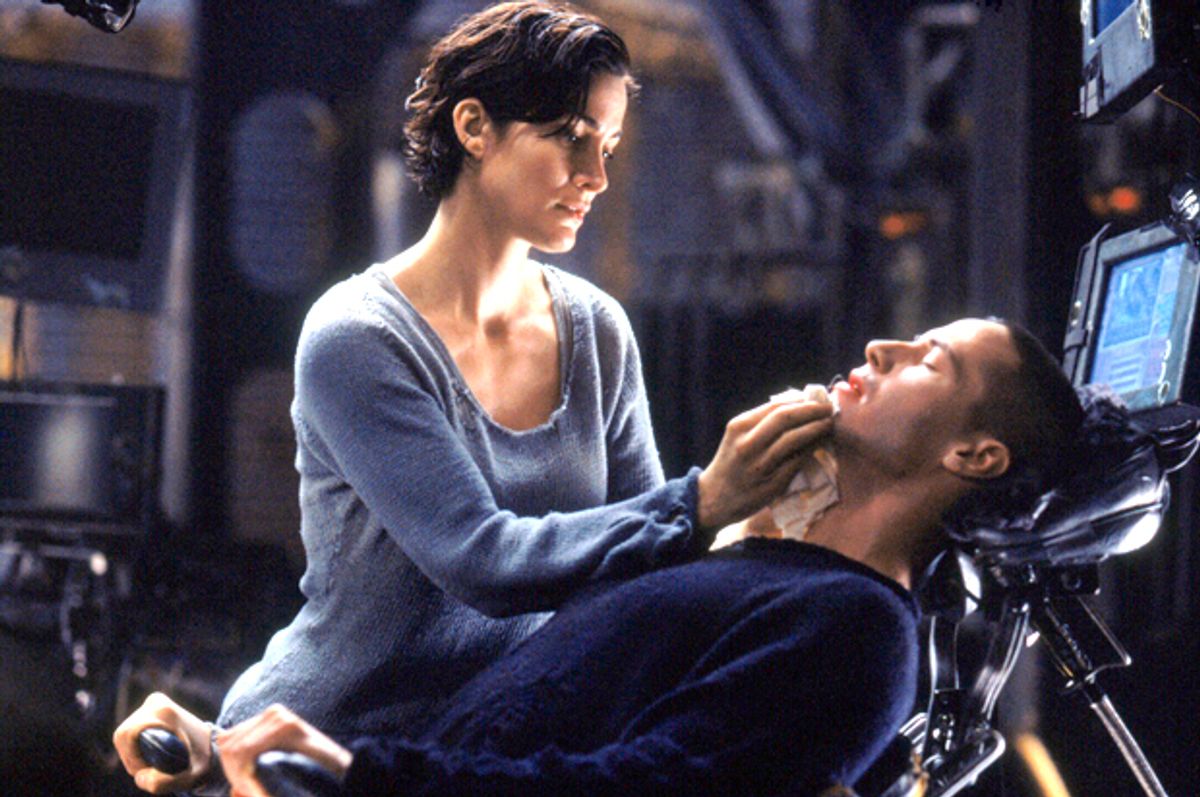 Carrie-Anne Moss and Keanu Reeves in "The Matrix" (Warner Bros.)
--

Our lives seem normal. Just like in the beginning of "The Matrix," the classic sci-fi movie from 1999 starring Keanu Reeves. Not great or anything, but fine. We get up every morning and repeat our programmed daily grind.

But is this all life has to offer? Or is there more to it than this? Some larger, hidden force controlling us and our society that we don’t recognize or understand?

What is the Matrix?

In the movie, the main character, Neo, was presented with a choice as to whether he wished to learn the reality about the hidden forces.

And now, dear reader, you are presented with the same choice. Do you really wish to know? But the reality of the truth might be more painful and difficult than the illusion of your current existence.

If you take the blue pill by stopping here and reading no further, then you will be safely returned to your current life, resume your daily grind, and be none the wiser.

If you take the red pill by reading on, however, there is no turning back. The reality of the truth will forever change your understanding of the hidden forces that are acting upon you.

In modern capitalist societies like America, our lives are just fine. We're not suffering from mass starvation or ruled by a despotic tyrant who tortures us at will. We're free to watch any television show we desire or partake in almost any (legal) act of leisure we'd like. We are told, repeatedly, that we are free. And we feel free. We think we are free.

Since we were children, we've been told we can be whomever we wish to be in this great democracy. The choice is completely our own. So it seems like we are free.

But are we free?

Well, there’s just one little catch to this “freedom.” We must work. And if we must work, then how can we be truly free? These two concepts don't go together; in fact, they're diametrically opposed.

Are we forced to work under threat of physical violence? No, the System assures us. We are not forced to do anything.

Well, then, you must work.

You know, this is sounding rather disturbing. I might just decide that I want nothing to do with any of this, thank you, and I’ll go off into nature and make my own place to live and eat food in the wild. Nice try, but that is not permitted. Someone else owns that land so you cannot do that. Huh? As a human being on this planet I cannot live in the natural environment that I was born into and make my own home and eat my own food? Nope, that is against the law. Instead, you must work.

Well, if we all must work, can we at least choose the type of work to do? Yes, the System assures us. We are free, remember? So we can choose our own work and do anything our hearts desire.

OK, this might not be so bad after all. I think I’ll be a movie star and be rich and famous. Sure, the System says, go ahead. But, of course, the odds of being successful are a million to one, and in the meantime, you need to eat. So that option is closed.

Well then, I’ll be a doctor so I can heal people. Sure, the System says. You’ll just need to get into medical school, and you’ll first need to take an entrance exam and score in the top percentile of the population. But I’m just an ordinary person. Oh, sorry, that option is closed.

A lawyer maybe? A pro athlete? An artist? An explorer? A philosopher? Closed, closed, closed.

So what can I do, then? Well, here’s a mop. You can clean the floors at Walmart. But I don’t really want to do that. What happened to being able to choose my own job? Just get to work.

If I must do this unfulfilling job, may I at least spend only a small amount of my life at work? No. In order to make ends meet, you’ll need to work a lot. An awful lot. It will require 50, 60, or 70 hours per week. You’ll probably need to get a second job, and maybe a third. Now hold on here. This means I’ll be working all day long, almost every single day. I’ll have no more than just a few hours left to myself. Yes, that’s just the way it is.

But this is my life! Sorry, this is just the way it is.

The vast majority of our precious time in life is spent at our jobs toiling away. Our lives are hectic and frantic because they are centered around 0ur jobs, and we have only a very small sliver of time left for our own lives.

So we become dissatisfied with our lives. We feel unfulfilled. We experience emptiness, alienation and a vague general sense of resentment. Many people become depressed or turn to alcohol or drugs to relieve the mental anguish.

This is just the way it is, the System tells us. But hold on a second here — this is not some naturally occurring phenomenon. It’s not like, say, the earth revolving around the sun. Or the fact that our bodies require food to live. Or the fact that sometimes it rains.

Being forced to toil our lives away? That is not just the way it is. No. That is something that has been entirely imposed by humans.

In fact, whose idea was this? It certainly wasn’t the majority of the people, because 80 percent hate how this System robs us of our own lives. It is no accident that we are forced into bondage. Someone is benefiting from all of this. Someone is behind it all. But who?

In "The Matrix," Neo senses that hidden forces are acting upon him. And he is right. It turns out that life was not as it appeared to be and that, in fact, hidden forces were deceiving the population into believing that everything was normal while it simultaneously exploited the population.

In real life, we also sense some sort of a hidden force acting upon us and our society. What is the System? The pathway to understanding it is simple: Follow the money.

Last year, several of the top hedge fund managers personally earned for themselves over $1 billion each. What sort of contribution did they make to society that justifies such enormous payments? It must have been extraordinary. Did they make life better for millions of people by, say, curing disease, preventing hunger, providing affordable housing, spreading education, developing a clean energy source to preserve our environment? No, nothing like that. They managed money for rich people to make them even richer.

This reveals what the System is all about. A select few at the top extract enormous sums of money for themselves by forcing the great masses of the population to spend their lives in toil. The entire System is structured to favor these wealthy few. It forces everyone else to work their lives away in unfulfilling jobs that they hate and that make them miserable for minimal compensation that keeps them trapped in their circumstance, working ever harder and longer merely to hang on.

Just the way it is? No. This System is by design.

And thus millions of Americans, as they toil away, believe they are “free.”

It is the greatest deception of all time. It is a real-life Matrix.