This is a Democratic civil war: The Hillary/Bernie rift cuts to the essence of the party's soul

Are the Democrats a modern corporate party, or one for the people? The "limousine liberal" debate still matters 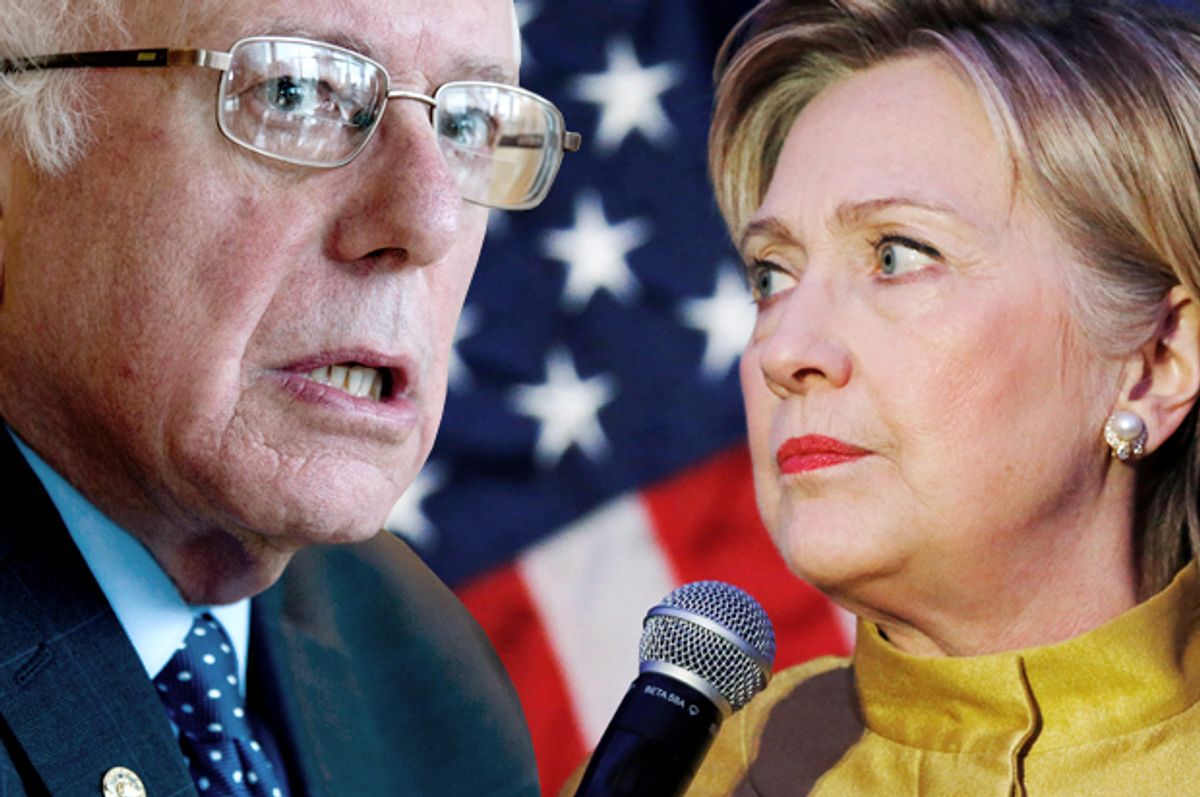 Trying in vain to derail the Donald Trump locomotive, his Republican Party opponents tarred him with the most toxic political metaphor of the last half century: he was, they claimed, a limousine liberal.

Hillary Clinton has borne that stigma through a good part of her political career. She will undoubtedly confront that charge again in the fall should she be the Democratic nominee. Even socialist Bernie Sanders has been depicted as the voice of well-heeled “limousine liberals and Mercedes Marxists.” How to sort this out?

Nowadays we assume that a limousine liberal is almost by definition a Democrat, so why did Trump hear the criticism? Actually, however, the first politician to suffer that sobriquet was a Republican. Back in 1969 the then-comptroller of New York City, a long-since forgotten Democratic Party apparatchik named Mario Procaccino, was running against the city’s sitting Republican mayor, John Lindsay. Procaccino called out Lindsay as a “limousine liberal.” He meant that Lindsay was to the manor born, raised on Park Avenue, tutored at the toniest preparatory schools, a graduate of Yale, formerly employed by a white-shoe law firm, and a past congressman from the nation’s richest congressional district, known as the “silk stocking district” on Manhattan’s Upper East Side.

Despite these credentials -- which normally would have constituted the résumé of a staunch defender of the status quo -- Lindsay belonged instead to a breed of subversive elitists, determined to undermine the traditional order of things. They championed the civil rights revolution, advocated a war on poverty, undermined the war on communism abroad, disrespected the mores and moral strictures governing the family, sexual relations and cultural propriety in general, and could care less about the dilemmas facing white working and lower middle-class Americans, Procaccino's people from the outer boroughs. While these purported reformers pretended to succor the poorest, they really meant for working people to bear the costs, while they remained insulated from any real contact with poverty, crime and the everyday struggle to get by, living in their exclusive neighborhoods, sending their children to private prep schools, sheltering their capital gains and dividends from the taxman, and getting around town in limousines, not subway cars.

Although he was born rich, is excessively fond of luxury, and never met a tax shelter he didn’t love, Trump doesn’t qualify. Rather he has become the voice of the angry and disenchanted who believe for both good and phobic reasons that the Establishment, in both parties, holds them in contempt. It is precisely his status as a billionaire outlier, a “bad boy” gone over to the dark side in the eyes of his compeers, a fearless irreverent, that appeals to his legions. The racism, xenophobia and resentment that lend energy and lurid color to his campaign are far more reminiscent of Mario Procaccino than of John Lindsay.

If Trump supports Social Security and higher taxes on the wealthy, that echoes the notorious but deeply meaningful oxymoron uttered by one Tea Party partisan warning the government to keep its hands off his Medicare. Trump is no limousine liberal, but something far eerier. Neither of the conservative right nor the liberal left, Trump is sui generis. His demagoguery functions as a sponge that soaks up all the animosities fueled by economic decline, racial fears, the relentless growth of the leviathan state, the shattered fantasies of national omnipotence, and the breakdown of immemorial familial, sexual and religious norms. Incongruous as it may seem, the larger-than-life Trump voices the emotional logic of the “little man” living in frightening limbo between the truly powerful and abysmally powerless.

Hillary Clinton, however, is as close as it gets to the real deal; a limousine liberal if not by birth and breeding (she hails from modest circumstances) then by virtue of a long career ensconced in the halls of power. There she has earned a reputation as a serial changeling: for fracking and against it, for her husband’s crime reform bill of 1994 and now against it, for freeing Wall Street from Glass-Steagall regulation and then scolding the big banks for following that lead, for ending welfare as we know it and then bemoaning the increased poverty that followed on, against a $15/hour minimum wage and now not sure, and so on. It is for these kinds of reasons that she is so widely distrusted, which is after all why limousine liberals are so often depicted as hypocrites. Moreover, her ties over the years to Wall Street, to Walmart, to major hedge fund players invested in a dozen industries (including the major companies that keep the prison industrial complex humming), and the Fortune 500 more generally undermine her claims that she will seriously take on those powerful institutions that are responsible for the long slide in the well-being of American working people.

Hillary and Bill have become wealthy as an indirect result of these carefully nurtured associations. But it’s not that alone which make her an adopted poster child for the limousine liberal elite. Rather, it is also her carefully burnished reputation as a reformer from above that does the trick. On the one hand, the underlying distribution of power and wealth shall remain the same; on the other hand, all those impediments to formal equality, whether in the realm of race or gender or nativity or family composition or sexual orientation, shall be erased. About those matters, modern corporate capitalism has no real preference, its amorality comfortable with whatever serves the bottom line; indeed, nowadays as the recent dust-ups over Indiana and North Carolina’s anti-gay laws indicate, these “immoral” communities may also function as niche markets big business would rather not alienate. It is this willingness to upset social arrangements so long as they don’t jeopardize the fundamentals of the political economy that marks off the limousine liberal persuasion from Republican elites, with whom they otherwise share a commitment to neoliberal capitalism.

“Mercedes Marxists” may cotton to Hillary, but don’t feel the Bern. Sanders has none of the prerequisites of the limousine liberal. His bank account is much too small, he’s a socialist and actually means it (which is why he’s so universally trusted no matter what else people may think of him), and Wall Street gives him the chills. His campaign amounts to the first robust electoral challenge to limousine liberalism in two generations. The fissures it has opened up in the Democratic Party won’t heal quickly.

What Sanders has captured are the passions aroused by the multiple failures of the neoliberal order to meet the material needs and the yearnings for equality, social justice and solidarity of working-class Americans. He is the heir of Occupy Wall Street, multiple strikes by low-wage workers, dozens of minimum and living wage movements and ordinances, and miseries of deindustrialization and downward mobility. His actual programmatic offerings are in fact not that radical; they're actually slightly to the left of the New Deal. But the country’s political culture has evolved so far away from those basics of economic democracy and social security that Bernie’s “revolution” can almost seem like one. That millions are willing to sign on to that agenda, to rally on its behalf in the teeth of expert derision, hints at an underlying culture of anti-capitalism that limousine liberalism can’t abide.

Limousine liberalism might be thought of as class struggle, American-style. For the Republican Party, which depended on this image for decades to pose as friends of ordinary Americans, deploying it as a weapon against their Democratic opponents, it has become a monster they can’t control, threatening to devour those elites who confected it. For the Democratic Party, limousine liberalism may have spawned a civil war.

Steve Fraser's new book, "The Limousine Liberal: How an Incendiary Image United the Right and Fractured America" is being published on May 10 by Basic Books. His other books include Every Man a Speculator, Wall Street, and Labor Will Rule, which won the Philip Taft Award for the best book in labor history. He also is the co-editor of The Rise and Fall of the New Deal Order. His work has appeared in the Los Angeles Times, the New York Times, The Nation, The American Prospect, Raritan, and the London Review of Books. He has written for the online site Tomdispatch.com, and his work has appeared on the Huffington Post, Salon, Truthout, and Alternet, among others. He lives in New York City.