We beat Donald Trump by mocking Donald Trump: What Bill Maher and Barack Obama understand about whipping a bully

Trump's weakness is ridicule. Even if Jon Stewart is sitting this one out, Democrats need to embrace serious satire 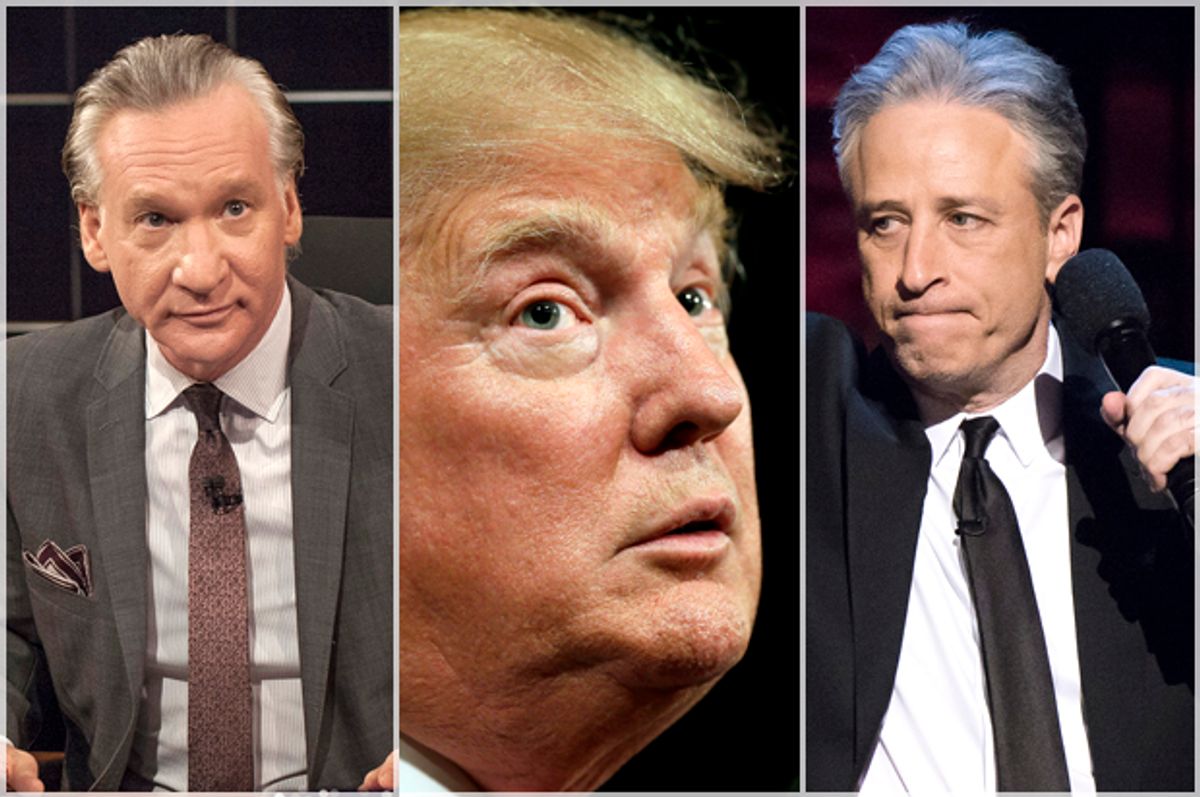 Donald Trump’s absurd yet frighteningly real campaign for the presidency is hard for anyone with a moral compass to see to its somehow plausible conclusion. So perhaps the most satisfying approach at this stage in the process is to draw upon the history of political satire and hope the Democratic wise men and wise women are already preparing to take their subtle, critical talents to new levels of genius when it comes to TV ads.

Our whole political moment makes little sense. Trump spouts dangerous ideas that should scare off any who call themselves conservative, who are loath to take chances on radical shifts in political direction. And while clever progressives (Bill Maher, the Comedy Central crowd, etc.) far outnumber conservatives in purveying political humor, liberal talk radio tends to take a serious approach to dire issues, whereas right-wing talk radio shouts, spouts and breeds violent hatred. Nothing funny there.

Political satire thrives on irony. It does not have to shout. Mark Twain was one of America’s best. Though as racist, anti-immigrant, and anti-Catholic as the next man in the years before the Civil War, he grew into the tart, subtle moralist we admire. Learning of a lynching in his native Missouri in 1901, he penned a piece that spoke to the failure of enough people to express their outrage. With legions of Protestant missionaries going to Asia to bring God’s “light” to the uninformed, he appealed as follows: “We implore them to come back and help us in our need. Patriotism imposes this duty on them. Our country is worse off than China; they are our countrymen, their motherland supplicates their aid in this her hour of deep distress. They are competent; our people are not. They are used to scoffs, sneers, revilings, danger; our people are not. They have the martyr spirit; nothing but the martyr spirit can brave a lynching mob, and cow it and scatter it. They can save their country, we beseech them to come home and do it.” That’s how one potentially reaches the hearts of enough thinking people to ignite a movement that overcomes apathy.

It is not likely that the power of satire will dissuade those who, for whatever reason, see in Trump an answer to their prayers. Having drunk the Kool-Aid, they probably can’t be helped. But for everyone else, pointing out the calamitous prospects with a combination of stark sobriety and dark humor is probably more likely to get under the Tweeter-in-Chief’s skin than an earnest approach to issues of domestic and foreign policy.

To wit, going by the publicized short-list of potential picks, we can envision the bold new Executive branch of government under Trump:

As Veep, former Governor Jan Brewer of Arizona has Sarah Palin’s intellectual reach without being burdened by the beauty pageant past. Trump can show how serious a feminist he is (“Women love me”) by having a female on the ticket without the requisite measurements of a celebrated “Trump woman.” Most important qualification: Brewer pushed for racial profiling by Arizona law enforcement. Additional strengths: Knowing how to stretch the truth and walk it back without seeing the connection between misleading and lying. She claimed that her father died fighting the Nazis, when he never went abroad and passed away 10 years after the war ended; after a dose from the spin-doctor, she revealed that her father had suffered from a lung disease that she presumed was due to his work at a munitions plant in Nevada.

Rick Perry as secretary of state. The glasses convey gravitas, so it doesn’t matter what he thinks, says, or does. He expressed deep concern when the news reported that as secretary of state, Hillary Clinton mingled official with personal email. For Perry, it was “an ethical issue that must be addressed.” Then it was revealed that as governor of Texas, Perry routinely conducted state business on his personal email. Oops.

Phil Robertson of “Duck Dynasty” as secretary of war. After World War II, the War Department was renamed the Defense Department, which was a wimpy surrender to political correctness.

Scott Walker as secretary of labor, for all the obvious reasons. He’d abolish unions for federal workers, just as he worked so hard to do to public sector unions at the state level in Wisconsin.

With the exception of Phil Robertson, any or all of the above could conceivably occur.

There has already been a U.S. president who acted a bit like Trump, and he was impeached. Andrew Johnson. He was known for an explosive temper and indecent language when he laid into his political opponents. A businessman before entering politics, he began as a Jacksonian Democrat, then joined the Republican administration of Abraham Lincoln before vetoing, as president, as many pieces of legislation as his small heart could contrive to do. (He claimed the radical Republicans were plotting his assassination.) In a Washington’s Birthday speech in 1866, he mentioned his own name more than 200 times. Now doesn’t that sound Trumpian? Because of Johnson’s unseemly actions, the opposition took over Congress later that year. One cartoon showed the former Tennessee tailor standing in front of his shop, with signs in the window reading “Party Ties Sold Cheap” and “Coats Turned.”

There hasn’t been enough political incorrectness from the left. How brilliant was President Obama’s taunt last week at Rutgers University, when with simple clarity he told the truth: “Facts. Evidence. Reason. Logic. An understanding of science. These are good things. These are qualities you want in people making policy.” And then, with fine comic timing, while knowing the situation confronting America was not at all funny, he charged ahead: “You might wonder where this strain of anti-intellectualism came from…. Let me be as clear as I can be: In politics and in life, ignorance is not a virtue. (Applause) It’s not cool to not know what you’re talking about. (Laughter) That’s not keeping it real, or telling it like it is. That’s not challenging political correctness. That’s just not knowing what you’re talking about.” That’s the ticket: serious satire.

Satire revels in its ability to call up truth and redress it through ironic connections. Few recall that upon declaring independence in 1776, the Second Continental Congress was looking at an impending invasion of British forces: New York fell easily and remained under British control for the next seven years. The decisive Battle of Yorktown was no given. A “third party,” the French army and navy, saved the impoverished United States from becoming a blip in history, with colonial status restored. Now, 240 years later, there does not appear to be a “third party” (GOP-sponsored) willing to rescue America from its potential undoing.

Itchy fingers hover over the GOP self-destruct button. Are they looking ahead? How would their tongues ever stop tripping over a President Trump’s pronouncements during a (gasp) four-year term? Can we see serious conservatives defending his “you won’t believe how terrific this wall is going to be” style of fractured reasoning? Wouldn’t they do better just to sacrifice to the Dems, and spend four years Clinton-bashing? (What could come easier to them?) As mean-spirited as they already are in denying rights and benefits to the non-Republican majority, the level of mean-spiritedness Trump hawks to the ill-informed somehow does not, at present, look scary enough to formerly resistant “leaders” of the Republican Party so as to allow them to discover a higher principle and cease cowering before the orange-tinted Goldfinger rebellion--Trump’s “Midas touch” being, as investigators will eventually turn up, fool’s gold. Where is the GOP’s self-respect? (That’s a rhetorical question, obviously.)

When the American Revolution began, the rebels faced long odds of triumphing over the British juggernaut. The regular course of human events was upset. There was no clearly understood future for our republican experiment then, no leader other than George Washington considered, and even he could have turned monarchical. His character was a saving grace, as things turned out. Hmmm, character.

Perhaps it is too panicky to suggest that the 2016 rebellion might actually succeed against current odds. But in the age of reality TV, where the camera manipulates and scripted concoctions pass for “reality,” Hillary Clinton is the one being criticized for being too scripted. Meanwhile, Trump’s taunts and intimidation, designed to redirect attention from his ignorance, can be viewed as a “new style” of campaigning for president. He does not understand the federal Constitution, folks. No, there is ample cause for concern. Just as on “American Idol,” we have a popular ballot that does not insure a meritocracy.

And what if American government is delivered into the hands of a man of questionable ethics who communicates most comfortably in 140 characters or less? History will date the Trump triumph to the emergence of Sarah Palin eight years ago (thanks again, Senator McCain). She’s back, she’s on the Trump train, and one of his short-list V.P. choices, it is said. Trump adores the poorly educated--he said so--and apparently believes that Palin possesses a logical and lexicographical faculty; he finds her both syntactically and politically resonant.

So this is where we are at, as we smile nervously at President Obama’s serious satire. Without the right kind of principled takedown, bizarre won’t be a strong enough word to describe the new United States of Swagger.