That was when I lost my body: The open-marriage request that opened my eyes

When my husband told me he wanted to date other people, it reopened a secret I thought I'd buried decades earlier 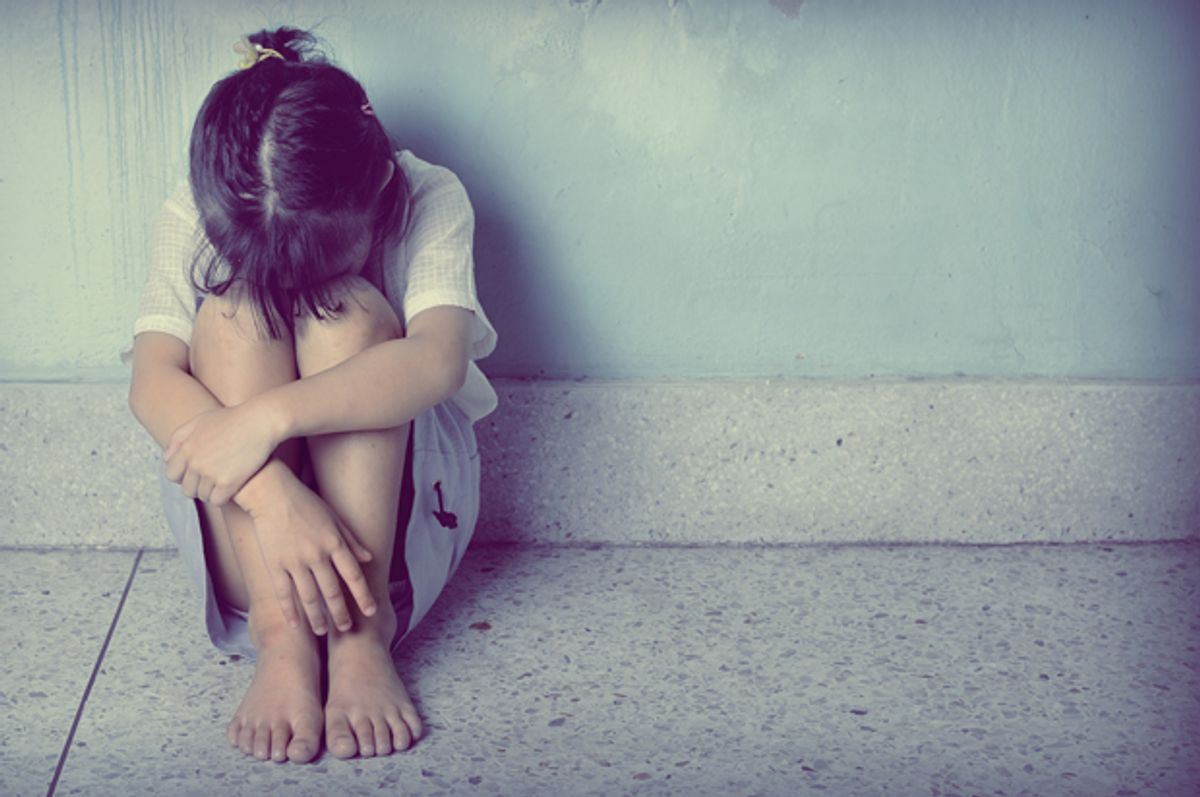 It took supermodel Beverly Johnson 28 years to go public with her story of Bill Cosby drugging and molesting her. The catalyst was other women coming forward with their stories. It took me even longer to confront my molestation, but the reason was radically different.

“I want to date,” my husband of 17 years told me one December in our beautiful house in the Hollywood hills.

“What?” I asked. We’re both actors. It seemed like an "SNL" sketch.

“I want to go out with other women,” he said.

“You mean” I said, “It’s like Friday and I say, ‘Will you be home for dinner tonight or do you have a date?’”

It turned out he was serious. He was leaving me.

I feared it was about a secret I’d buried three and a half decades earlier, over twice the length of our marriage.

One muggy Minnesota afternoon when I was 10 I wandered into the dining room where my grandpa was sitting by the window. Everyone else was taking a nap or watching TV in the basement where it was cool.

My legs hung over his knobby old knees.

His hand was under the waistband of my shorts. He wiggled his fingers.

He moved his hand to my tummy then under my panties. I wanted him to stop but I was afraid I would hurt his feelings. Then he put his fingers between my legs and into my private place. That was when I lost my body.

From then on I cleaned myself and dressed but I never again looked at my body on purpose. It was at fault for the dirty thing happening. There was just the one instance of betrayal but it was enough to make me hate myself from the neck down, enough 35 years later, to ruin my marriage.

My husband and I were best friends, brilliant everywhere except in the bedroom. The sex was lousy and infrequent, happening, if I really tried, once a month. Unable to solve our problem after eight years of effort, we started therapy with a man several couples we knew were seeing.

I’d been successful at keeping the moment in the dining room hidden even from myself. Then our therapist insisted on seeing us separately. Without my husband there an image suddenly shot through my brain. I was pulled backwards onto Grandpa’s lap, his hand between my legs.

“I think my grandfather touched me where he shouldn’t have,” I tentatively told the doctor. It was the first time I had said it out loud.

“Uh huh,” he said. “But we were talking about your problems with intimacy?”

He passed over it. He never mentioned it again.

It must not be important, I came to think. It wasn’t rape. He didn’t rape me.

Now with my dear husband filing for divorce I had to stop pretending it didn’t matter.

I found a woman therapist and related all of it. Then I let her know I despised my grandfather, long dead by then. When she asked about my relationships with men, I told her about my rage. I began to see how I was making all men pay for one man’s perversion. At home, waking from a nap, I couldn’t stop the bile from rising to the surface. I bellowed.

“You perverted jerk! You used my body for your own sick gratification. And you didn’t care.”

Then followed a string of curses, every vile name I could call him, every hateful word I knew. It cleansed me. I was done with him from after that. The damage he did was another matter.

“I’m sexually dysfunctional,” I confessed to my therapist.

“Because,” I replied, “my husband told me I don’t climax fast enough.”

“Okay, let’s see if that’s true.” She leaned in. “I want you to go home and stimulate yourself. Time it and tell me how it goes next session, okay?”

I slunk home, put a wind-up clock on the table by my bed and did the deed. I had to make myself turn to look. Five minutes. I did it again. Five minutes.

“That’s good,” my therapist said. “Now I’m going to give you a second bit of homework.”

“Rent some pornography, watch it and take notes on what’s happening when you have the urge to shut it off. We want to find out what sexual situation or activity upsets you.”

This was going to be bad. I thought it was disgusting to watch people do before cameras what was a deeply personal act -- but what choice did I have?

"I was bored,” I told my therapist. “Who wants to watch other people pretend to have good sex?”

“You didn’t get embarrassed?”

“No. It was pretty skeevy but it didn’t embarrass me. I’d rather be doing it.”

“Uh huh,” she said. “I don’t think you need to worry about this anymore. You’re not dysfunctional.”

It was as simple as that?

It turned out it was. Shortly afterwards on a trip to Rite Aid I rounded the corner of the vitamin aisle, almost running into an impressive set of pecs and abs under a tight T-shirt.

I tingled all over and went weak in the knees. The sensations I was feeling below my clavicle were so immediate and foreign. My head wasn’t the boss of my body anymore.

Next I noticed that food stopped having meaning. I wasn’t evil if I ate a bowl of ice cream, and if I had salad for dinner I wasn’t virtuous. Food was fuel. Already on the “divorce diet,” the weight fell away and for the first time “slender" was a word that would describe me. I looked at myself in mirrors and shop windows, glass doors, windshields. I couldn’t get enough of me.

A lot of acting work was coming my way so I hired a stylist. He went through my closet and donated all my gypsy cover-up clothes to charity. Then he took me shopping. At the Beverly Center I emerged from the dressing room in a white silk Donna Karan dress.

“So,” my Professor Higgins asked, “what do you think?”

“If I walked into a room wearing this,” I replied, “everyone would say ‘who the hell does she think she is?’”

He built me a wardrobe based on his belief that no matter where I was, even alone when no one could see, I should feel beautiful.

I learned how to flirt. I could let myself like a man without feeling I’d have to sleep with him. It stopped being my fault.

Then 35 years of repressed libido hit the streets of Los Angeles. There were dramatic, short-lived affairs that broke my heart for a few weeks but taught me how good sex can be. Eventually I had to admit I was reversing the problem, ignoring my brain and letting the equipment below my waist make too many decisions. There were long periods, sometimes a year or two, when I chose to be alone. Quite slowly but irrevocably I came to love my whole self.

I don’t know what personal hell the women Cosby allegedly violated went through before they felt strong enough to say it out loud. But I do know that when a man forces a woman, whether she’s a child or all grown up, into intimate acts without her consent, he tells her this: “You are nothing. Your body is only a thing for my pleasure and I’m entitled to have it. You don’t get a vote.”

When that happens a woman must, if she can bear it, reclaim all he has taken. I did nothing to make my grandfather come after me but I could do something to put the responsibility where it belonged. I was in my forties when I learned I could say “no” and still be loved.

Eight years after my husband walked out I found a man who did.

Linda Carlson, a writer living in Connecticut and New York, is at work on a memoir, My Body, Not Myself, based on this essay