What "unity" with Trump means: For Republicans, winning is everything, principles are swept away and hypocrisy reigns 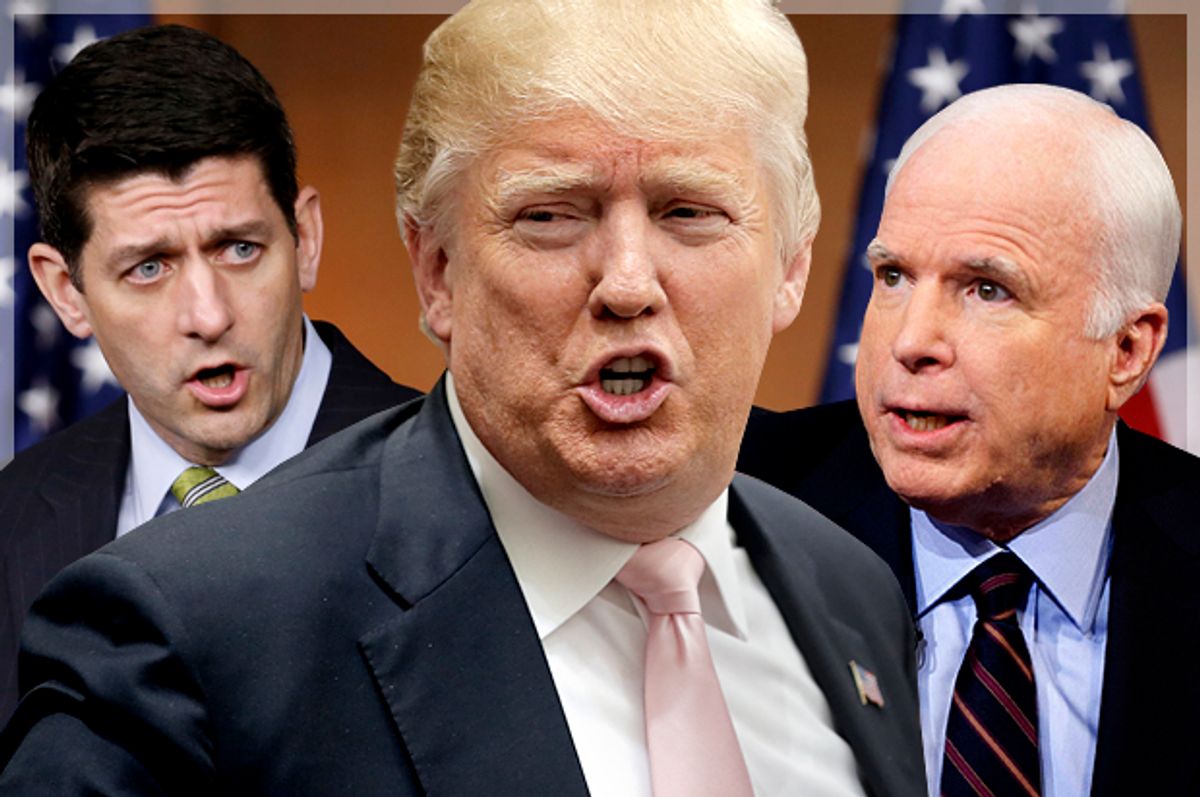 Who doesn't love a good farce, especially starring the Republican Party shipwrecked by its own perilous unreason. On cue, absurdity erupts when a transparently phony savior, more full of himself than any wacko right-wing senator, ambushes America’s party of pomposity. No surprise, this never-elected amateur gunslinger invites ridicule at every turn: his verbosity tries to compensate for ignorance by recycling word tics like an old, scratched LP.

And more. Despite bitter complaints about devious, "unfair" party primary tactics, this inflated whiner wins enough delegates to run the deck. Does satire need any more to feast on? Who else but Trump, with even less insider party footing than Bernie Sanders, preemptively indicts, then threatens the very legitimacy he dreams of leading? Has faux victimhood ever merged so disruptively with delusions of grandeur?

Whenever righteous, oblivious pomposity is so deflated, and with more to come as Republicans brace for endless exposés of Faulty Trump Towers, farce is inevitable. Talk about airing your dirty laundry: could Repugs finally match Dems as the most inept politicians ever? Less farcical, and more predictable, is the tepid rush by conflicted GOP endorsers. Trump's ego momentum drives party unity more than loyalty, consensus or conviction he can win. Countless pros still anticipate either short-term disaster (November landslide) or longer-term woes (Trump wins, then elbows aside Dubya as our worst president).

Winning enough votes in our most bizarre primary offsets a battalion of Trump blunders. His vulnerability is hardly obscured by the forced party assumption every enemy of your enemy (Hillary) is your ally. Trump proves not just how the crudest of celebrity hustlers, insulting, badgering, menacing, cab dupe at least 40% of a gullible base. The nation's most prominent political grifter achieved what no fat cat donor, party hack or candidate ever pulled off: forcing today's regressive GOP to stare in the mirror, now horror struck at the disfigured, decrepit Dorian Gray grinning back at them. Is Cruz the lone, subversive “Lucifer in the flesh”?

Yet, how few party fixtures, despite endlessly bemoaning lost ideological purity, will not bow and scrape, twist ex-sacrosanct "values," and back Trump as their only lottery ticket? How wonderfully flexible are such self-anointed idealists — defying all "compromise" as sinful (even with a rational president) —yet now embracing the loose cannon who makes all other scatterguns look secure — and who himself scorns compromise as the losers’ way out. Perhaps there is no hypocrisy like right-wing hypocrisy.

Realists anticipate that win or lose, Trump likely leaves the party in shambles: either he batters decades of revered dogma into smithereens and/or brings down epic repulsion consistent with the audacity of his duplicity. That augurs a Never Trump November finale. Just what billionaire-happy Republicans need, after decades of having taken its base for granted: a new fistful of undeliverable, "populist" Trump IOUs. With or without further incitement to riot at rallies, treating protesters as lawless and unAmerican.

Win, Lose, All of the Above?

Whatever the Donald's destiny, the full exposure of GOP hypocrisy is in earnest. Banished are illusory party principles, consistent policy, even moral hills to die on. The last weeks say less about Trump than how disposable are sacred GOP cows. No question Trump's barnstorming fire will fade as his new, improved hustle surfaces: to appear minimally presidential (however at odds with his true personality). Will attacking Bill Clinton's sexual disgraces elevate the equally immoral Trump? Or keep him clean after constant mud-slinging? Shifting gears doesn't bridge how an increasingly unprincipled party credibly converts the unprincipled, buffoonish Trump into plausible commander-in-chief.

What if being "presidential" is just not Trump, even kryptonite for a loudmouth as much anti-Republican as anti-Hillary? Why would Trump forego his working schtick, especially jaw-dropping reductionism that scorns expertise or scientific knowledge, compassion or justice? Trump boasts all of Palin's prideful, fact-hating ignorance, though with a more polished, media-insulated brand of Know-Nothingism.

Because the Donald will do and say anything to win, the GOP now reveals its corrosive underbelly: wide support for a “pathological liar” (echoing Cruz, Sanders and others) who makes Machiavelli’s prince look almost reputable. Is that how to make Republicans, let alone America, great again? Trump is the perfect, modern foil, talking in such empty constructs angry campers can project whatever they want. And though "modern conservative philosophy” now mortifies itself, Trump turns out to suit the GOP he (falsely) holds in contempt. That explains why rightwingers will flock to the Donald circus, for so many think alike, locked in simplistic, talk-radio hallucinations -- pushing angry grievances, not real-world proposals, thus nothing that lifts any Joe the plumber.

Behold a Trump blessing: undeniable public demonstration the GOP cares only about one (rather paltry) national goal -- its own existence, Is today's presumptuous nominee about anything but his own insatiable, status-addicted demons? Policy incoherence fits the bill after a decade of empty, undelivered GOP promises -- today's vaporous blather simply calls for more racially-pungent seasoning to cover the stench of decaying Republican "red meat."

No wonder the primitive Sheldon Adelson loves Trump enough to invest $100 million dollars. Who protects billionaire treasures like a permanent member of the club, a guy whose meaning in life comes down to having a huge net worth (or rather, bragging about what’s not been confirmed)? Trump the faux populist looks rather Republican after all: the unscrupulous hustler who glorifies winning as heroic, without any sense of irony or contradiction, even awareness of the negative Trump image.

Of course, hypocritical right-wingers are bitching and moaning — look how badly their cover is blown! But soon enough party wallflowers will join the campaign cult of Trump. Or retire, like the Bushes. Trump still serves the oligarchy, even weakly stitching together the joke of party unity —  and in his favor will run a stronger campaign against Hillary than equally appalling, out-hustled primary losers. Now we find out if Dems know how to eviscerate the party of Trump so visible in the public eye. No wonder consistent polling puts Sanders above Clinton in topping Trump.