Cornel West: Trump is a "narcissistic neo-fascist in the making"; Clinton is a hawkish "milquetoast neoliberal"

EXCLUSIVE: Cornel West says "Sanders has been the candidate of integrity." He will "go down fighting until the" end 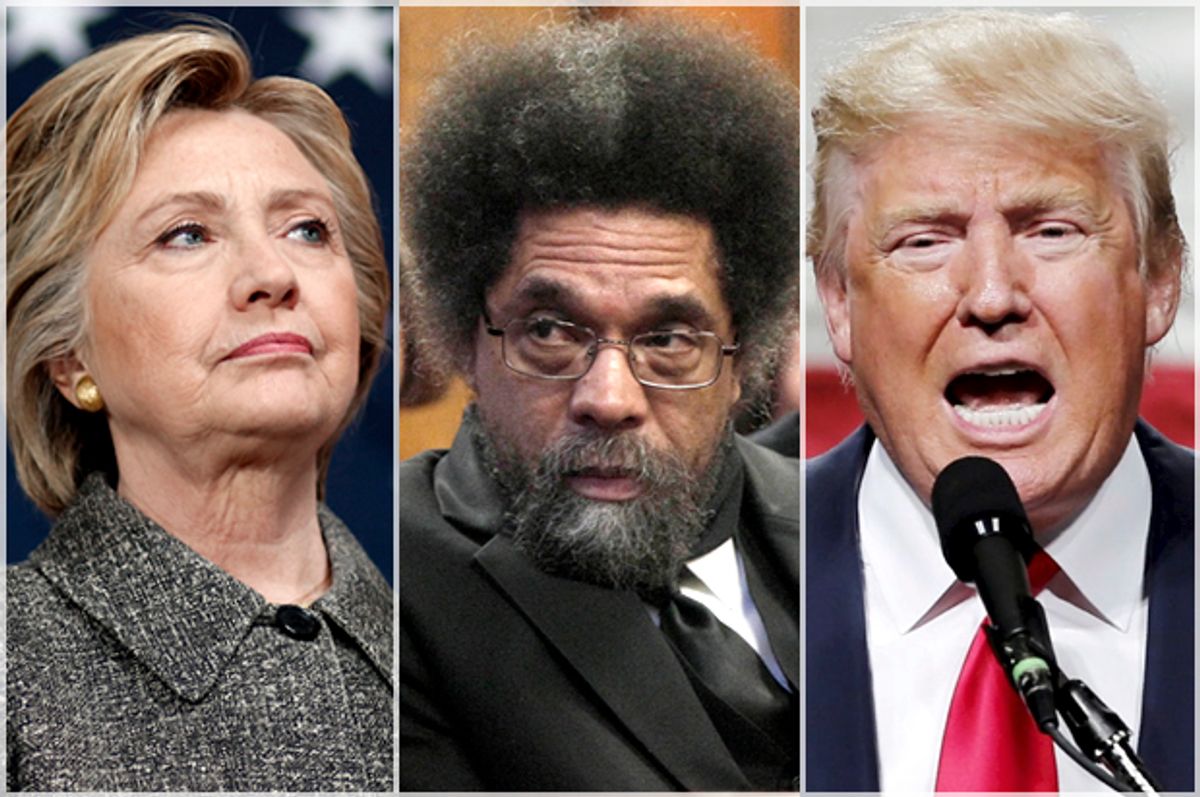 "Just to tell the truth, Trump is a narcissistic neo-fascist in the making, and you just have to say that. That's what it is," said renowned scholar and activist Cornel West.

"Hillary Clinton is a milquetoast neoliberal" who is pushing for "hawkish policies around the world; you just have to say that," he added.

West sat down with Salon last week for an interview. The prominent philosopher and dissident condemned the capitalist system and the "big money" that rules society for leaving Americans with the miserable choice between the two leading presidential candidates.

He also blasted the corporate media for fueling the rise of GOP front-runner Donald Trump, describing him as the out-of-control Frankenstein's monster who is "coming back to haunt you."

West, who endorsed Sen. Bernie Sanders for president, and endearingly refers to him as "Brother Bernie," said he will continue backing the self-proclaimed democratic socialist candidate until the end.

"Bernie Sanders has been the candidate of integrity and vision when it comes to poor working people," West stressed.

"Those of us who are blessed to work with Brother Bernie are going to go down fighting until the last moment, because we're tied to a cause, not just a candidate," he added.

The longtime professor and theologian, who has taught at Harvard, Princeton, the Sorbonne and more, was joined in the interview by jazz composer Arturo O'Farrill, whose "Cornel West Concerto" premiered Saturday at New York City's legendary Apollo Theater.

West and O'Farrill, a socially engaged Grammy Award-winning musician whose new work highlights West's impassioned political speeches, discussed the commodification of art and the degeneration of the corporate-controlled music industry. Salon covered this conservation in another article.

Activism, the corporate media and Trump

"This is the age of Ferguson, and some people are affected by some of the larger social movements that are taking place in different parts of the country, and much of the world," West said, stressing the importance of activism.

Progressives should be "letting people know why it is that we have such limited options in terms of the ballot box and what forms of activism can we engage in to be thermostats and shape the climate of opinion, rather than just be thermometers and register and reflect that climate of opinion," West said.

When asked why he thinks the political options are so limited, West blamed the capitalist system, emphasizing, "We're ruled by big money."

He slammed the corporate media that has enthusiastically profited from Trump's meteoric rise.

"Trump is a Frankenstein of corporate media and there is no way he would have the status that he did if they didn't cover every word, every tweet," West explained.

"Of course the CEO of CBS made it very clear, very, very clear, that Donald Trump is bad for America but he is very good for us," he added.

Les Moonves, the chief executive of CBS, has spoken favorably Donald Trump's campaign, calling it “good for us economically.” He applauded the profitability of the “circus” of the 2016 presidential campaign, noting it “may not be good for America, but it’s damn good for CBS, that’s all I got to say.”

“What can I say? The money’s rolling in, this is fun,” Moonves said.

West argued that this congruence of corporate interests demonstrates how the capitalist system thrives on controversies and crises.

"What he meant is this money is just market-driven commodification of the rawest sort that allows him to get out," West noted.

He pointed out that Sanders has consistently gotten exponentially less media coverage than Trump. According to some estimates, Trump has gotten over 23 times more coverage. And in 2015, ABC World News Tonight devoted 81 minutes to Trump, but just 20 seconds to Sanders.

"You bombard people like that, lo and behold they're gonna be interested: 'What's going on? This is entertaining. He's funny. Oh look, he's a fool. He's crazy, he's for real!'" West explained.

"Frankenstein — out of your control, now he's coming back to haunt you," he added.

West said "the big money behind" Trump's rise has only helped fuel "all the xenophobia, anti-Mexican and anti-Muslim sentiment ... and the autocratic neo-fascist sensibilities that go along with that."

Further compounding this is "a life of impunity, no accountability" enjoyed by Trump, one of the richest people in the world, West continued. "Add all it up: Trump has just no accountability; he does and says what he wants. That's the essence of infantility. What it is to be childish, with no aspiration of being childlike."

The 2016 election and beyond

The presidential election increasingly looks like it will be between Clinton and Trump. By sheer numbers, Sanders cannot win the nomination on delegates alone, so his campaign is pushing for a contested convention.

Meanwhile, the Sanders campaign says the DNC, and particularly its leader, Debbie Wasserman Schultz — a former co-chair for Clinton's 2008 presidential campaign — has done everything it can to prevent Bernie from getting the nomination.

West maintained that the struggle will go on until the end. "We're going to fight all the way through Philadelphia, at Philadelphia and thereafter," he said, referring to where the Democratic National Convention will be held in July.

We "are going to go down fighting until the last moment," West stressed.

When asked what form he thinks this continued action should take, West replied simply, "It's going to be jazz-like."

"We just have to make sure we maintain our own integrity," he added.

Sanders has previously pledged to endorse Clinton for president if she gets the nomination. When asked if he thinks progressives should vote for Clinton or should vote for a third party, West did not give a direct answer.

"I think people ought to be free to think for themselves. It's part of being jazz-like," he said.

"I'll love Bernie no matter what Bernie does, but I'm not an imitator."