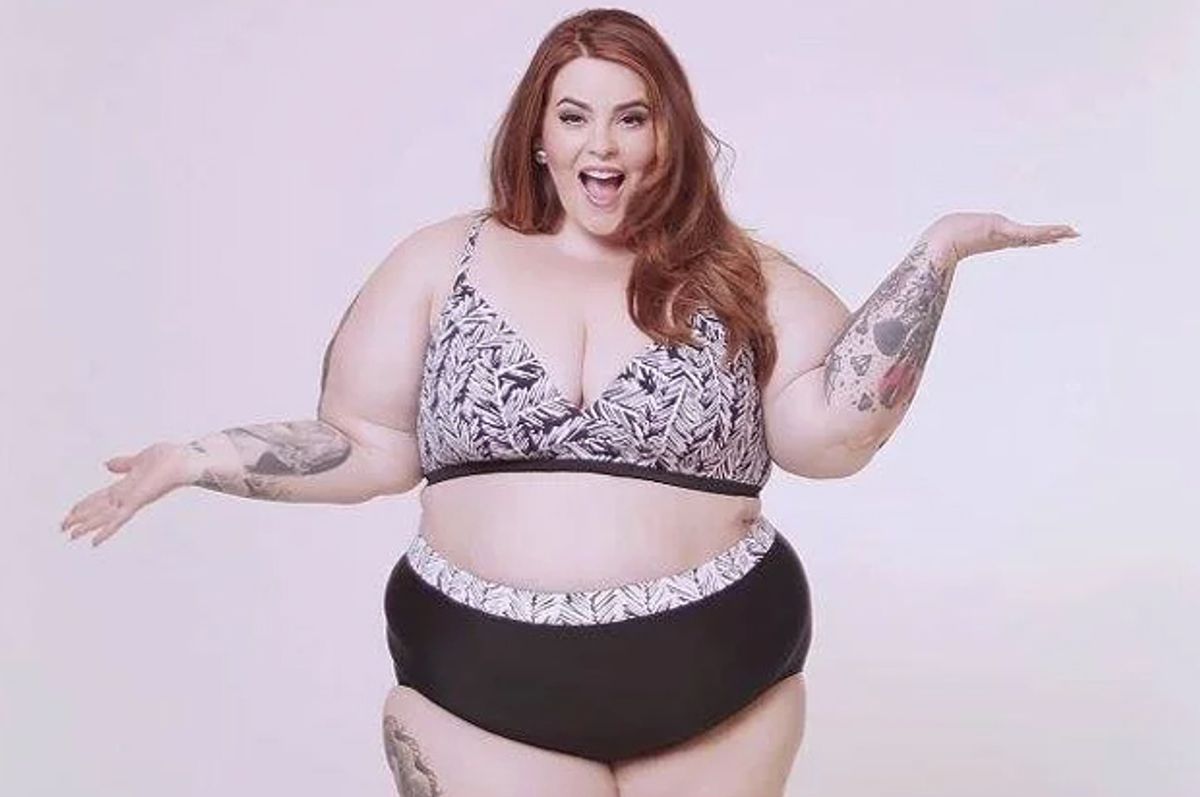 "Us big girls gotta cover up." That's what a teacher reportedly told high schooler Amy Steverson last month when she showed up for her prom in her beautiful — and fairly modest — black and tan dress. As AOL News reported in April, Steverson was then allegedly made to don the vice principal's tuxedo jacket and spent a portion of her prom night crying over being "shamed for having breasts." And unfortunately, her story is just one example of a super dumb idea that's somehow been going around a lot lately — that the standard of acceptable exposure is different for bigger female bodies than it is for smaller ones. Do we really even need to explain how ridiculous and ignorant this is?

Earlier this week, Facebook found itself apologizing after initially banning an ad for an event hosted by Australian feminist group Cherchez la Femme that featured a photograph of plus sized model Tess Holliday in bikini. After nixing the image for saying it failed to comply to Facebook's ad guidelines, the group appealed, only to be informed it didn't comply with the company's "health and fitness policy." Facebook explained that "Ads may not depict a state of health or body weight as being perfect or extremely undesirable" — like "close ups of 'muffin tops' where overhanging fat is visible," because "ads like these are not allowed since they make viewers feel bad about themselves. Instead, we recommend using an image of a relevant activity, such as running or riding a bike." It ended with the message, "Have a great day."

The group rightly found this canned response pretty ironic, posting its own statement that "Facebook has ignored the fact that our event is going to be discussing body positivity (which comes in all shapes and sizes, but in the particular case of our event, fat bodies), and has instead come to the conclusion that we've set out to make women feel bad about themselves by posting an image of a wonderful plus sized woman. We're raging pretty hard over here — both because Facebook seemingly has no idea that plus sized, self describing fat women can feel great about themselves, and also because we haven't been able to boost the original damn post."

Visualize, if you will, a world in which "overhanging fat" is not automatically deemed a ploy to make women feel awful about themselves. As one commenter recently wry noted, "That's Facebook for you. You can have hate-based content out the wazoo (racist, homophobe, misogynist, religious, etc etc etc) but God forbid you try to promote acceptance and tolerance and celebrating people being happy and proud of who/what they are."

On Monday, Facebook backtracked, saying, "Our team processes millions of advertising images each week, and in some instances we incorrectly prohibit ads. This image does not violate our ad policies. We apologize for the error and have let the advertiser know we are approving their ad." But Cherchez la Femme's Jessamy Gleeson told the Guardian, "Quite simply they need to understand we can use images of fat women to promote women being happy."

But Facebook isn't the only social media destination with a running problem with how to handle images of women's bodies. Instagram, which has a longstanding fear of nipples and last year attempted to curtail the use of the word "curvy," had its own size-related dustup this week too. Aarti Olivia Dubey, a self described "fat brown writer-blogger-fashionista" whose Instagram feed is called Curves Become Her, said on the site on Monday that "an image of me and my 3 brown plus sized friends was reported and deleted." She then reposted a photo similar to one of millions on Instagram — of a group of women in bikinis. She wrote, "HOW is this image being hateful, hurtful, abusive, trolling or obscene? Do 3 fat girls in swimsuits equate to gore, porn, racism, sexism? Or is it that people only want to see slim girls in swimsuits?"

In a message on the site for Singapore's women's magazine Cleo, the editors shared the backstory that "We reached out to a body positivity blogger, Aarti Olivia Dubey, and asked her to share her story. The point of the story was simple - every body is a bikini body.… If you're a straight-sized person, it's easy not to 'see' size. It's easy to complain about that bit of extra flesh here, or our awkwardly-shaped whatevers, and easy to forget that we don't actually know what it's like to have our bodies heavily policed and censored; or what it's like to be told time and time again, 'You do not deserve to be seen.' So what do you see here? We see bold, confident, proud women, who are - most of all - happy. And if you ask us, that's not 'inappropriate,' that's a cause for celebration."

See how easy that was? An acknowledgment that women can be visible in the world and have their presence not be a statement in need of shaming or censorship. And if you don't like it, as Tess Holliday famously says, maybe you need to go eff your beauty standards.