How the media enabled the Trump nightmare: A toxic symbiosis reaches new heights of idiocy 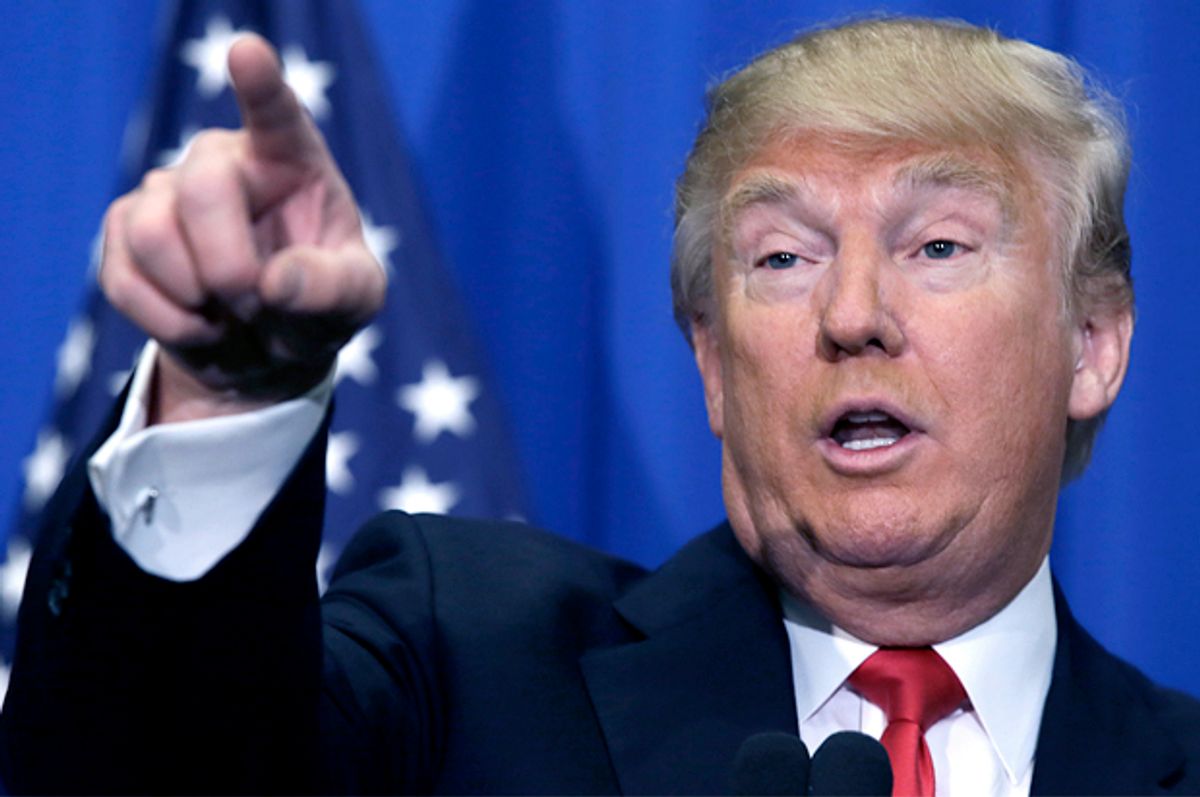 Forget all the mournful mooning by New York Times columnist David Brooks and the desiccated Republican establishment about Mitt Romney riding to the rescue, presumably with a dog strapped to the roof of his SUV. There are lots of other potential saviors out there. If only Kim Kardashian had run for president instead! Or that guy with the beard from “Duck Dynasty”! (It is a curious feature of modern life that TV shows one has never seen still occupy space in the brain.) Or Curt Schilling, the former Red Sox pitcher turned Twitter bigot! Then maybe we could have had a Republican nominee with some substance and dignity.

In one of the more hilarious displays of boneheaded media tautology on offer in 2016, it required two New York Times reporters to make the point on Tuesday that Donald Trump is more like a performer or entertainer than a conventional politician. Blistering barnacles! You don’t say? I literally never thought of that before, except for every single day since the middle of last summer. This dispatch from the Department of Redundancy Department, authored by Michael Barbaro and Jessica Dimson — presumably two adult humans not suffering from major cognitive impairment, and employed by the flagship publication of American journalism — observes that Trump’s candidacy is fueled by “shrewd showmanship” and “calculated irreverence,” that he has a conflicted relationship with the news media and that he has transformed the tedious ritual of the campaign press conference “into a frequently riveting spectacle of self-promotion and media manipulation.”

Again, wow: My hornswogglement knows no bounds. But the self-awareness of Messrs. Barbaro and Dimson yet has its limits. To paraphrase J. Robert Oppenheimer, now the political reporters have known sin. But they’re not quite ready to face it. What that article does not say is that Trump's showmanship is the one essential quality of his success, and is precisely what the media demands from him. It’s not entirely fair to say that Trump was created by the media. Conditions on the ground had to be ripe, most notably the split between the Republican electorate and its Washington aristocracy that had rendered the party into a corpse-like shell, the perfect habitat for demonic invasion. But oh boy, did we nurture him and grease his path and build the stage for his coronation, all while pretending to faint with shock and disbelief, and while privately assuring each other that this wasn’t really happening and that the normal order would be restored sooner or later.

We didn’t really want the normal order to be restored, and that wasn’t much of a secret. Trump was a great story; he was good for business, in the worst possible way. Trump is a media creature down to his bionic bones, honed and polished by the New York tabloids and reality TV. We loved him or we loved to hate him; we fed on him and he fed on us. We even loved it when he pilloried reporters and accused us of lying, or caged us up in distant enclosures at his third-rate Leni Riefenstahl rallies. That made us feel special, because we understood it was all part of the performance and that meant we were bit players in this exciting drama too. Anyway, as the Times story observes, the next day he was likely to call us by our first names and tell us how much he had missed us.

It was a good feeling. Well, a good-bad feeling. Trending closer to bad, just at present. I’m using the first-person plural, even though I have only briefly faked it as a campaign-trail reporter this year, because I see no point in pretending that I or anyone else was immune to all this. How many thousands of words and how many hours of my life have I devoted to this bombastic, hateful and dangerous idiot when I could have been reading Rilke or working on my novel or, I don’t know, watching old episodes of “CSI: Miami” on YouTube? We all understood, pretty quickly, that nothing we wrote or said was likely to hurt Trump and that everything we did served to fuel him and empower him. Trump is the Candyman of politics, or the Cthulhu: The more you say his name, and the more you think about him, the closer he comes to manifesting in reality and devouring your mind.

Except Trump isn’t the Cthulhu of politics because as that Times story tells us, duh, his rise may be about all sorts of things, but has almost nothing to do with what we used to call politics. He’s more like the real Cthulhu, an eldritch entity who’s going to eat your face while you snicker and chant nonsense. Several times during this cycle I have hauled out Joan Didion’s maxim that politics is more a subset of show business than the other way around. When she wrote that, probably while covering the 1988 election, it was pretty close to an original observation, meant to cut straight through the self-important horse-race analysis of conventional political reporting.

Now everybody knows that and everybody says it, and it’s more like a self-canceling truism. We still have the bullshit horse-race analysis, of course, but these days it comes dressed up in Joan Didion drag (or Roland Barthes drag), full of knowing assurances that the entire political spectacle is a free-floating semiotic carnival whose underlying substance is obscure or invisible. It’s almost enough to make you yearn for the old-school political columnists I read growing up, that bevy of white dudes in white broadcloth shirts who whispered in our collective ear that they knew more than they could tell us about where the bodies were buried and how the sausage got made.

Wait, hold the hate mail, at least for now: I said “almost.” I’m close enough to being a left-wing version of David Brooks already, except without the rich friends and the nice suits. I don’t really want to go back to the days of Joseph and Stewart Alsop, James Reston or Jack Germond and Jules Witcover. For one thing, most of those guys were tools. Literally: They were mouthpieces for the refined political wisdom of one party or another, for the State Department or the CIA or the White House or the Pentagon. And above all that, they were mouthpieces for an ideology of government, for a view of how power functioned in Washington and how things got done.

Those commentators, in the days when they really were a concentrated Beltway elite and most literate Americans read at least one of them on a regular basis, assigned themselves the role of shaping broad public consensus on a wide range of Cold War-era domestic and foreign-policy issues. Although that consensus ultimately collapsed after Vietnam and Watergate and Reagan, they had considerable success in channeling and controlling American political discourse over an extended period of time. When you look at MSNBC’s Chris Matthews, you see the ghost of that kind of well-connected commentator and opinion-shaper, and the ghostly pursuit for that kind of consensus. (Matthews can only dream of having that much influence, to be sure.)

Those guys would have been horrified by the suggestion that politics was a subset of the entertainment industry. They were wrong about that, of course, but their wrongness served a function for a while. The point Joan Didion made in 1988, which was closely related to the point Hunter S. Thompson made in a different register in 1972, was that the Alsops and Restons of the world were high priests of a cult that didn’t know it was a cult, and that the ritual they took so seriously, when considered with some degree of critical dispassion, looked more like a farcical and poorly staged circus. Now the long-standing tendency of the media to view politics solely as a matter of polling and messaging, of who looks “presidential” and who makes a “gaffe” and who’s got “momentum,” has been augmented by second-hand critical studies and widespread cynicism (which is largely justified, to be fair) and a universal shared understanding that it’s all just spectacle.

Donald Trump would never have been possible, or even quite imaginable, in the James Reston era. Such a person would never have emerged in the first place, and if he somehow did he would have been authoritatively shut down and shunted aside. People sometimes say that Trump has echoes of George Wallace or Huey Long, but not really — those guys were politicians, good or bad, with long histories of patronage and power and policy-making. People say he echoes the Andy Griffith character in Elia Kazan and Budd Schulberg’s great political satire “A Face in the Crowd,” but not really — Griffith played an entertainer who became the public spokesman for a faceless, bland Establishment politician.

Donald Trump could never have risen to power (or this near it, anyway) in any other era. But that’s not an endorsement of those other eras of normative, self-delusional and increasingly dysfunctional politics, and in any case there is no road that leads there from here. Trump happened, in large part, because he expresses something essential about this era, and embodies the not-so-hidden needs and desires of the public and the media. We came to believe, not without reason, that American politics was just a circus. Every circus needs a clown, and the one we came up with is a killer.