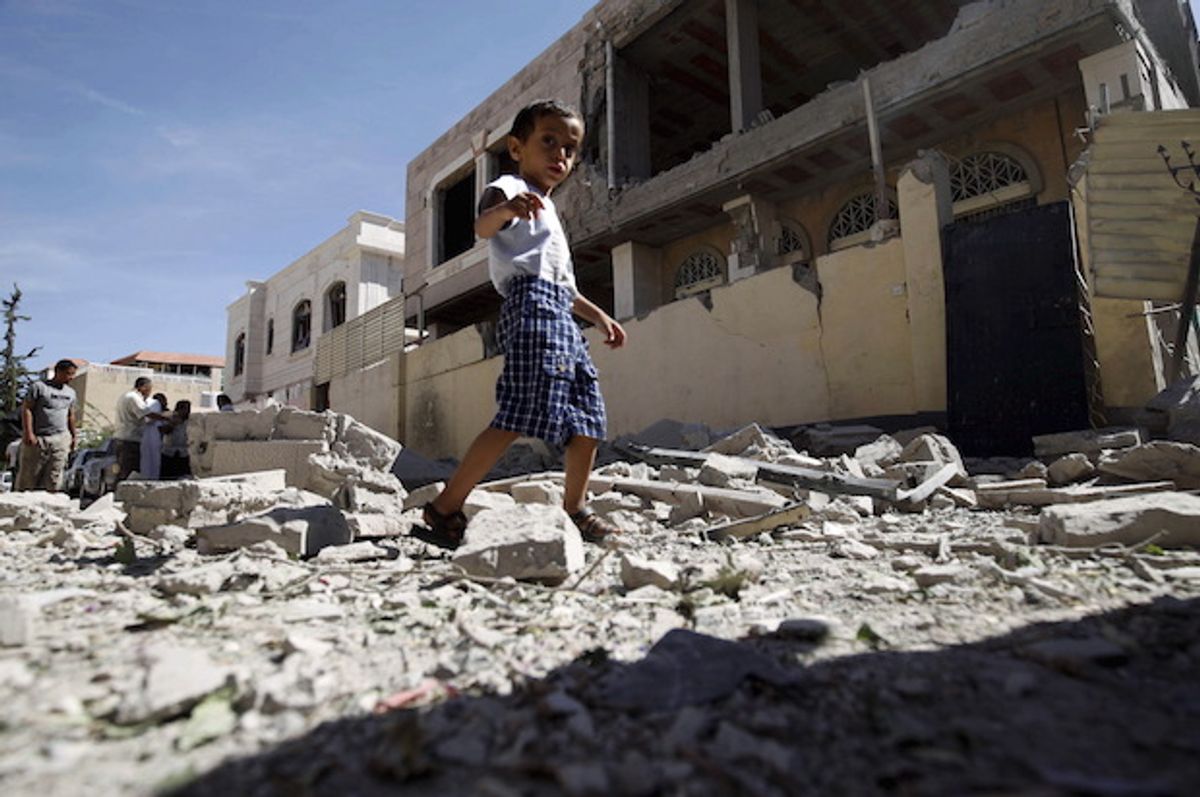 Numerous reports by leading human rights organizations have shown that the Saudi-led coalition that has waged a destructive war in Yemen since March 2015 has dropped banned cluster bombs on civilian areas.

A new report by Amnesty International details how, even when this war ends, Yemeni civilians returning to their homes are "at grave risk of serious injury and death from thousands of unexploded cluster bomb submunitions."

Amnesty has documented the use of six types of cluster munitions in Yemen by Western-backed, Saudi-led coalition forces. These widely prohibited weapons were created by the U.S., U.K. and Brazil.

The international Convention on Cluster Munitions, which is signed by more than 100 countries, bans these weapons. The U.S., Brazil and Saudi Arabia have refused to sign the convention, while the U.K. is a party to it.

The spokesperson of the Saudi-led coalition’s military forces, General Ahmed al-Asiri, denied in an interview with CNN that the coalition has used cluster munitions more than once. Reports by Amnesty and Human Rights Watch prove that the spokesman was lying.

Amnesty has called on all countries arming or participating in the coalition to "immediately stop transferring and using cluster munitions," to "decommission and dispose of their remaining stocks without further delay."

"International assistance is urgently needed to clear contaminated areas, and countries with influence should urge the Saudi Arabia-led coalition forces to stop using cluster munitions, which are internationally banned and inherently indiscriminate," Amnesty wrote in its report.

Since March 2015, well over 6,000 people have been killed in Yemen, approximately half of whom are civilians. The U.N. has said the Western-backed coalition is responsible for two-thirds of civilian casualties. It has bombed hospitals, schools, residential neighborhoods, weddings, a refugee camp and more.

A March report by UNICEF found that an average of six Yemeni children have been killed or injured every day for the past 12 months in the war.

Amnesty conducted a 10-day research trip in Yemen's Sa’da, Hajjah and Sana’a governorates, and interviewed 30 people, including survivors of cluster bombs and their families, along with eyewitnesses and experts.

The leading human rights organization documented 10 cases in which at least 16 Yemeni civilians were injured or killed by cluster munitions between July 2015 and April 2016. Two children were killed, and seven more were injured, in bomblet explosions that took place days, weeks, and sometimes months after the cluster bombs were dropped by coalition forces.

Few Yemenis know that these bombs are present. And recent flood waters have moved the submunitions and other unexploded ordnance into areas where civilians do not expect them to be, Amnesty added.

“Even after hostilities have died down, the lives and livelihoods of civilians, including young children, continue to be on the line in Yemen as they return to de facto minefields," explained Lama Fakih, Amnesty's senior crisis advisor.

"They cannot live in safety until contaminated areas in and around their homes and fields are identified and cleared of deadly cluster bomb submunitions and other unexploded ordnance."

For the past few months, the parties to the war in Yemen have worked on negotiating a ceasefire. Fighting along the Yemeni-Saudi border has decreased in this time, allowing some civilians to begin returning home.

"But demining officials, local residents and first responders told Amnesty International they continued to see civilians injured by explosions, with a rise in casualties from unexploded ordnance, particularly in areas along the Saudi Arabia-Yemen border," the rights group noted.

Meanwhile, Yemen’s demining agency is "ill-equipped and trained" to deal with the threat, Amnesty warned.

Three staff members of the Yemen Executive Mine Action Centre were killed in their work in April. Ahmed Yahya Alawi, the director of the center, told Amnesty different "types of cluster munitions have been used [by the coalition] but we have only worked with four of the types before. We were surprised by the new kind."

"We need to bring in trainers from the countries that made the weapons to train the employees… [and] we are looking for better technology to destroy these bombs," Alawi added.

Amnesty said Saudi Arabia and other members of the coalition have a responsibility to help clear the areas in Yemen contaminated by unexploded ordnance, and "should provide all possible technical, financial, material, and other assistance to facilitate the marking and clearance, removal or destruction of cluster bomb submunitions, duds and other explosive remnants of war."

“Failure to do so will be a ticking time bomb for civilians, including children, living in affected areas,” said Fakih, Amnesty's senior crisis advisor.

The rights group also called on coalition members to "provide victim assistance, including for the medical and psychological care and rehabilitation of victims and their families, as well as risk education."

Children are frequently the victims of this ticking time bomb, as they often mistake the submunitions for toys, Amnesty noted in its report. Some of the bomblets resemble drink cans, while others look like balls.

A 13-year-old boy who was injured in January after picking up a submunition said it was green and shaped like “a small ball that you play with.”

An eight-year-old Yemeni boy was killed by a leftover submunition. His 11-year-old brother lost three of his fingers and broke his jaw. The survivor said said the bomblets were "cylindrical with a red ribbon."

Another 12-year-old boy was killed and his 9-year-old brother injured by cluster bomb submunitions in April while they were herding goats in a valley near the Saudi border.

"Two or three days before the accident, my friend and I used to go and collect the bombs and put them in a bag and hide them under and between the trees," the survivor recalled. "They have a white ribbon."

The boy's father told Amnesty that they no longer return to the valley, as there are no safe spaces. “In the area next to us, there are bombs hanging off the trees,” he said.

"The significant number of submunitions used by the Saudi Arabia-led coalition forces and the high" rates of dud skeet submunitions "have not only killed and maimed, but also severely damaged livelihoods by killing livestock and turning agricultural land into de facto minefields, interfering with animal herding as well as harvesting of banana, mango and tomato crops,” Fakih explained.

"In most cases farmers and herders told Amnesty International they had no choice but to work in contaminated areas despite the risks," the rights group reported.

The British BL-755 weapon, which it found remnants of, is in the stockpiles of both Saudi Arabia and the United Arab Emirates.

This is the first confirmed use of U.K.-made cluster munitions since Britain adopted the Convention on Cluster Munitions in 2008.

A Brazilian-manufactured Avibras ASTROS cluster munition rocket was also found in Yemen, as was a U.S.-manufactured CBU-105 Sensor Fuzed Weapon.

In August 2013, the U.S. Department of Defense reached a $641 million contract with Saudi Arabia for the manufacture of 1,300 CBU-105 weapons. It is also in the stockpile of the United Arab Emirates.

Amnesty noted that the U.S. government, which prohibits the sale or transfer of cluster munitions with greater than a 1 percent fail rate, "appears to be failing to meet even this standard, which falls short of the complete ban on the use, production, transfer and stockpiling of cluster munitions that the 100 states parties to the Convention on Cluster Munitions have committed to."

For years, Amnesty stressed that it has called on all countries "to immediately halt the use, production, transfer and stockpiling of cluster munitions and to join the 2008 Convention on Cluster Munitions."

Since February, the rights organization has also pressured all countries to immediately cease direct or indirect weapons, munitions or other military equipment or technology to any side of the war in Yemen.

“Without a concerted effort to stop the Saudi Arabia-led Coalition from using cluster munitions, and urgent international support for clearance," Fakih emphasized, "these cluster bombs and other explosive remnants of war will leave a deadly legacy in Yemen for years to come, posing a threat to civilian lives and wreaking havoc on the local economy."