Anne Hathaway and Amy Schumer don't want to hear it: These comebacks to rude body comments are perfect

Hathaway has some words about post-partum bodies, while Schumer gleefully invokes "Miss Trunchbull" at the beach 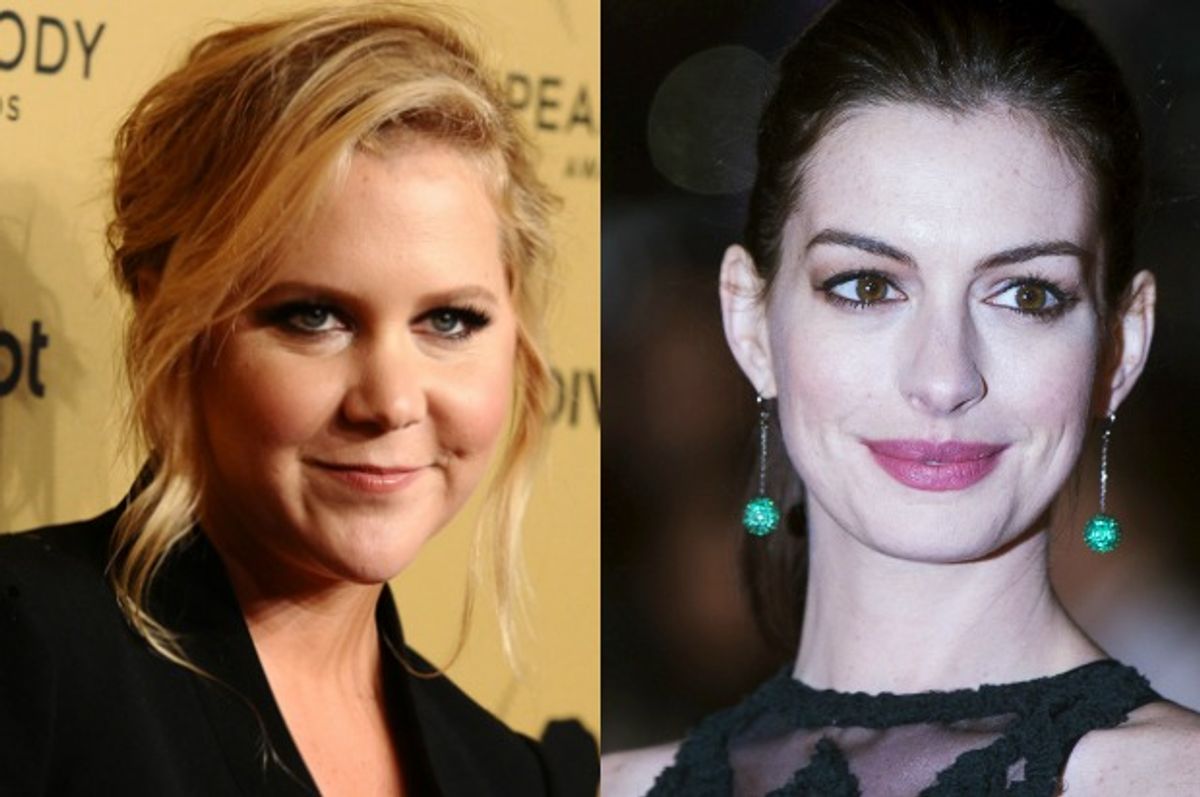 Fact: the world is full of horrible sad people who get off on policing women's bodies. Fact: they will always be with us, like roaches. But if there is any note of satisfaction to be found in the unending chorus of crap that women have to put up with, it's in the sound of ladies, increasingly, refusing to endure this nonsense. Every time a woman or girl makes a declaration that she doesn't give a damn what strangers think of her body, surely the angels sing. And right now, they sing for Anne Hathaway and Amy Schumer.

On "Ellen" this week, new mom Anne Hathaway, promoting "Alice Through the Looking Glass," discussed her eight-week old son and her halting steps back to the outside world. "I've been out of the house a couple of times," the woman who won an Academy Award for playing a starving person admitted. "I've been to the gym. I went to the gym three times." Hathaway, who looked gorgeous in a dark halter dress, said that she goes to a gym with people who resemble "Thor's trainer… the people who have too many muscles to be in 'The Avengers,'" she said.

"Yeah, I work out with 5- pound weights, but I pushed a baby out of my body, I feel good right now. So I don’t care what I look like, I feel great," Hathaway added.

Then she recounted that she told a trainer at the gym that she'd recently become a mother, and "I’m expecting him to say the thing that you say when someone says that you’ve had a baby. If somebody says, 'I had a baby 13 years ago,' you say, 'You look great.' That is what you do. That is the etiquette. So I say to this guy, 'I had a baby seven weeks ago.' And he goes, 'Oh, trying to lose the baby weight?'"

Hathaway paused, to let the inanity of the comment reverberate to the audience, before saying that she'd "mustered up her dignity" and told him "No, it's a little bit too soon to worry about weight, I'm just trying to regain my strength." Then, she admitted, she cried a little.

As Hathaway demonstrates, the appropriate response to a woman who's just had a baby is congratulations and praise. The expectation the she surely must, after delivering into the world a new human being, want to get her body as "bikini-worthy" as possible as quickly as possible, is frankly nuts — even if it's one celebrities themselves perpetuate with their inevitable sexy postpartum magazine covers.

Yet increasingly, Hollywood moms are pushing back. Last year, after welcoming her second daughter, Kristen Bell told Elle, "I find the 'baby weight' conversation to be a very stale topic. Who really cares? Just be healthy, don't beat yourself up, and have fun with your kid. The only way pressure is lifted is if we choose not to accept it any longer. I think that's what I did." And on Mother's Day, Kendra Wilkinson-Baskett, whose entire career was built on her formidable body, posted an abs flaunting photo on Instagram — of her loose, stretch-marked and two kids later midsection.

But God knows a woman need not have given birth to be scrutinized for — and unapologetic about — her body. Elsewhere on Instagram, giver of zero effs Amy Schumer posted on Tuesday a photo of herself wading in the ocean in a one-piece bathing suit. For context, recall that last month Schumer was surprised to find an old Glamour feature on her repurposed for the magazine's special "plus-size" edition — a move she publicly called them out for doing "without asking or letting me know and it doesn’t feel right to me." And earlier this month, she yet again addressed the issue of existing in the world in non supermodel-shaped corporeal form, in a brilliant sketch with Lena Dunham on the horrors of clothes shopping if you're above a "toddler size 3."

This time around, she accompanied the photo with the message to the "trolls" that read, "I hope you find some joy in your lives today in a human interaction and not just in writing unkind things to a stranger you've never met who triggers something in you that makes you feel powerless and alone. This is how I look. I feel happy. I think I look strong and healthy and also like miss trunchbull from Matilda. Kisses!"

Funny, self-deprecating and yet not self-loathing, with a devastatingly spot on assessment of what fuels bottom feeding commenters — check, check, check!