Nagasaki, the atomic bomb and the radiated pig that haunts me 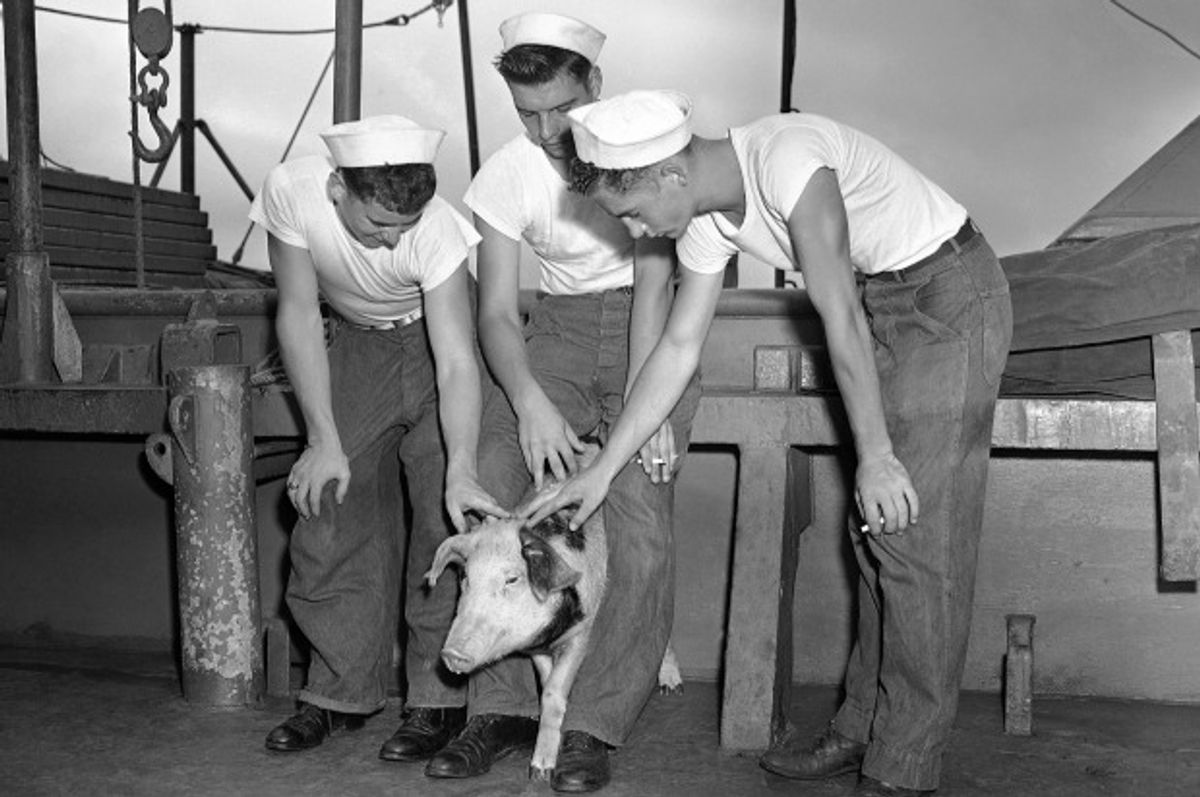 Have you ever actually seen the effects of radiation on a living creature? I have. My first glimpse of the unforgettable horror was at the Washington Zoo in 1948 when I was 11 years old. I stood in front of a glass-enclosed cage, spellbound by the presence of a large, listless pig. A sign on the glass said the pig had been radiated by an atomic bomb blast. I assumed that she had been found somewhere near Hiroshima or Nagasaki. No one explained what the pig was doing there or why she was being shown to the public. The memory of the pig was so frightening that at times in my life, I have questioned whether I had really seen a radiated pig or whether she had been a part of a wartime childhood nightmare.

A few years ago, I was part of an American tourist group visiting the Atomic Bomb Museum in Nagasaki. I walked through the exhibits, one after another, exposing the shocking remains of the explosion: the hands of a nearly carbonized wall clock fixed at 11:02—the moment of impact—the black and white pictures of human bodies strewn over a moonlike landscape, a replica of a charred wall from Urakami Cathedral—the largest Christian church in Eastern Asia—rising above a heap of melted, blackened rubble, and, of course, an oversized photograph of the infamous “Fat Man” mushroom cloud.

I stopped to read the large block words of the recorded statements from President Truman, Prime Minister Churchill, and Secretary of War Stimson confirming their agreement to release an atomic bomb on Japan “without prior warning”—believing that the action would be in the best interest of ending the war and, therefore, saving thousands of Allied and Japanese lives. That decision overruled any moral consideration of the residual effects of radiation on innocent people and animals. Within seconds, the image of the radiated pig that I had carried in my subconscious for so many years, resurfaced.

When I returned home from Japan, I began a determined search to uncover the history of the pig. Through friends in Washington, I was led to Pamela M. Henson of the Smithsonian Institute, who identified my memory as “Pig 311.” In an article she wrote entitled “The Smithsonian Goes to War: The Increase and Diffusion of Scientific Knowledge in the Pacific,” she confirmed that Pig 311 had been found swimming away from an atomic bomb explosion near Bikini Atoll in the Marshall Islands in July of 1946. (The explosion at Bikini Atoll was larger than the explosion at either Hiroshima or Nagasaki and occurred a year after the World War II was over.)

According to Henson: several thousand live animals— Some 3,030 rats, 109 mice, 57 guinea pigs, 176 goats and 147 pigs— were placed on target ships near the blast site in various locations to see how they would survive. Coverings were made for some of the animals to measure the protection that various types of fabric would afford. A variety of skin lotions were tested to see if radiation burns could be minimized. Many of the animals documented in her report died immediately and most of the others died within two weeks from the effects of radiation poisoning.

The one exception was Pig 311, who appeared to survive the sinking of the ship by swimming into the shore of one of the lagoons. After she was recovered, she was sent to the Naval Medical Research Institute in Bethesda, Maryland, for observation and was eventually given to the Washington Zoo. She died at the zoo in 1950—two years after I saw her.

Today, Pig 311 and the bombs dropped for experimentation at Bikini Atoll are barely known and have little recognition in history. In Nagasaki, however, there are powerful reminders of the effects of radiation. Besides the Museum, the most poignant symbol to me is a slim black obelisk that marks the spot where the atomic bomb pierced the earth seventy years ago in August.

On the day of my visit, a hand-painted sign with the English word “peace” rested beneath the obelisk in a bank of colorful spring flowers. A group of 15-20 Japanese school children formed rows and were singing what sounded like a hymn of praise. Impeccably dressed in navy blue uniforms with white shirts, they finished and bowed their heads, reciting in unison what appeared to be prayers.

As one of the Americans, I stood respectfully aside as if I were a witness a reverential service that was somehow connected to Japan’s history. While I grappled for a way to show some sign of sympathy, the Japanese children in front of the obelisk broke from their orderly rows and turned to smile at our group of American tourists. They crowded around us with their cameras. In English, their teacher asked if they might take pictures of some of us with them.

From the reverence of their prayers to the enthusiasm of their greeting, I felt no accusations, no awareness that we were the children of the Americans who once devastated the world of their ancestors. I would like to think that they understood, as many in the civilized world understand, that the horror that once rained down on Hiroshima and Nagasaki has served as a clear demonstration, an historic warning against the use of nuclear weapons by any other country for any reason. The forgiveness and optimism of the Japanese youth was an inspiration. Still, nothing can ever dispel for me the indelible image of radiation in my memory: I saw Pig 311.

Alice Bingham Gorman’s poems, stories and essays have been published by Vogue; O, The Oprah Magazine; The Louisville Review; The Dead Mule School of Southern Literature and others. Her first novel, "Valeria Vose," was published in 2018. Originally from Memphis, Tennessee, she is a snowbird living in Maine and Florida.