From Argentina to Zaire, Paul Manafort has profited handsomely off the suffering of the international community 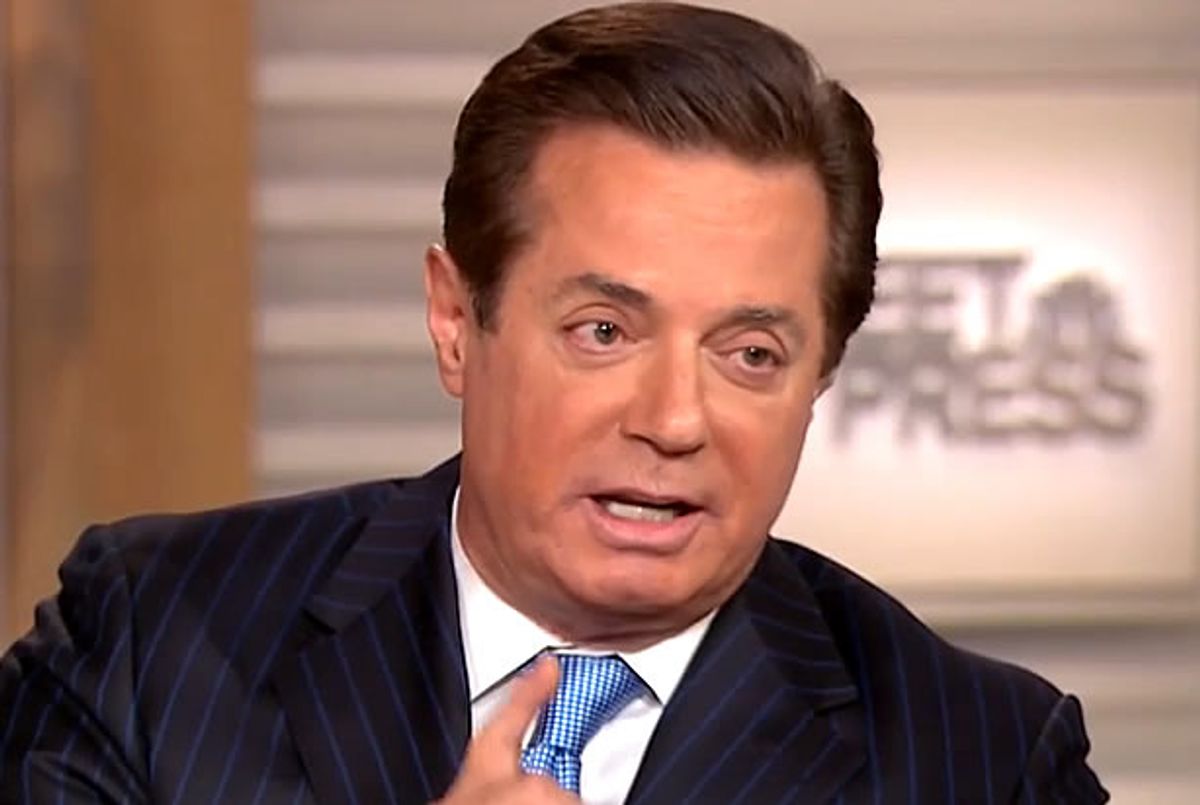 Paul Manafort, who Trump brought on in March as his Republican Convention strategist and recently elevated to campaign chairman, has worked for notorious arms dealers, warlords, dictators and international tycoons who have left trails of unrest, mayhem and death or looted their country’s treasuries, according to a new report by the American Bridge 21st Century PAC, which is primarily funded by a who’s who of Democratic donors including George Soros.

“In 1981, the Trump Organization had employed Manafort’s lobbying firm Black, Manafort, and Stone—which included Trump accolyte Roger Stone—making it one of the firm’s very first clients,” said the PAC’s research summary. “There and on his own, Manafort was responsible for representing some of the world’s most unsavory clients on behalf of what the press called the ‘Torturers’ Lobby.’

The PAC gives more than a dozen examples from the past three decades of Manafort’s career as a lobbyist, influence peddler and deal-maker, starting with being an international arms dealer to pocketing millions from Eastern Bloc clients who sought to park their assets in the West.

• Manafort represented Middle Eastern arms dealer Abdul Rahman El-Assir in the 1990s and even used his house as collateral in 2004 to secure a loan from El-Assir. Manafort claimed to French investigators that he received payment for advising the 1995 French presidential campaign of hopeful Édouard Balladur from the bank account of El-Assir. El-Assir was the middleman in the sale of French submarines to Pakistan.

• Manafort also claimed that his translator while advising Balladur was Ziad Takieddine, who was also involved in the arms deal. As of 2013, Takieddine was in prison for trying to procure a false passport. To the knowledge of American Bridge, the nature of Manafort’s translator has not been reported in the American press.

• Manafort’s firm represented Angolan guerilla leader Jonas Savimbi, making over $600,000 in 1985 alone. Savimbi and his UNITA army engaged in a decades-long civil war that terrorized and murdered hundreds of thousands of innocent civilians, with UNITA engaging in bodily mutilations, sexual slavery, child kidnapping, and witch burning. Sambivi funded his role in the gruesome civil war with proceeds of smuggled diamonds, aid from apartheid South Africa, and aid from the United States.

• Zaire dictator Mobutu Sese Seko retained Manafort’s firm in 1989 for $1 million annually to help address his PR issues: at the time, he was one of Africa’s most corrupt leaders, he had one of the worst human rights records, and his regime regularly engaged in torture, detainment, and rape.

• Manafort’s firm was hired to lobby on behalf of Nigeria and Nigerian dictator Sani Abacha in 1998. Manafort signed the contract himself and personally handled the account of President Abacha. His role was to present Nigeria as an emerging progressive democracy to American influencers in order to improve bilateral affairs between the countries, but just the year before, the U.S. State Department had outlined how the Abacha regime had engaged in persistent torture and abuse of detainees.

• Manafort’s firm represented the Kenyan government from 1990 to 1993, a period during which it received $38.3 million in U.S. aid. Throughout the 1980s and 1990s, Kenya’s dictatorial president Daniel arap Moi had silenced political opponents who supported a multi-party democracy with sham trials, torture, and indefinite detention. He also forcibly relocated thousands of people from an ethnic minority. The U.S. government briefly froze military aid in response to human rights abuses in 1990, but ultimately restored that aid by 1991, leading a State Department official to admit that “we compromised our human rights policy in Kenya somewhat.”

• Manafort had lobbied on behalf of Saudi Arabia, ultimately receiving what would in 2016 be worth $1.5 million. One of Saudi’s legislative priorities on which Manafort personally lobbied was to keep the U.S. Embassy in Israel from moving to Jerusalem to Tel Aviv. Today, Trump has announced his belief that the embassy should in fact be located in Jerusalem.

• Paul Manafort’s lobbying firm had a $900,000 contract on behalf of Philippine dictator Ferdinand Marcos to sell a more democratic image to Americans and ultimately help Philippine elites better influence American foreign policy. Manafort dropped the contract on the advice of the Reagan Administration just two hours before it announced it was pulling its support for the Marcos regime.

• By 1992, Manafort’s firm was making $450,000 per year from now-deposed Somalian dictator Said Barre, whose official ideology of “scientific socialism” was responsible for numerous human rights abuses and had left the country on the edge of mass starvation by the time of his ouster.

• Manafort’s firm represented Argentinian politician Alberto Pierri in 1997. In 1993, a number of journalists were beaten or received threats within days of publishing articles alleging that Pierri had recruited armed groups from gang members to act as “political thugs.” Pierri also called a journalist who wrote an article criticizing his role in drug money laundering in Argentina a “lousy Jew” and a “Jewish flea-bag” in 1994.

• Under Argentinian President Menem, Spain’s Gas Natural Co. was granted one of eight distribution zones when it broke apart the Gas del Estado. Pierri was a close ally of and powerful figure in the Menem government. In 1993, Spanish newspaper El Mundo accused Pierri of trying to extort executives at Gas Natural Co.’s Argentinean branch. An official at Gas Natural confirmed that there had been “some problems” with Pierri.

• In 2006, Manafort’s firm took on Russian oligarch Oleg Deripaska as a client. Manafort helped arrange meetings between Deripaska and John McCain as McCain started his presidential run in August 2006 despite the fact that the U.S. had revoked Deripaska’s visa in July 2006 amid concerns he was linked to organized crime.

• In 2007, Manafort’s firm set up a private equity partnership with Deripaska in the Cayman Islands, which was supposed to include $19 million of investments. The firm received $7.5 million in management fees for the partnership, but Deripsaka sued the firm in 2008 for failing to invest, return, or even account for the $19 million. While Deripsaka failed to retrieve his investment, he had reported that Manafort and his partners had purchased a stake in Ukrainian cable television and Internet ventures with it.