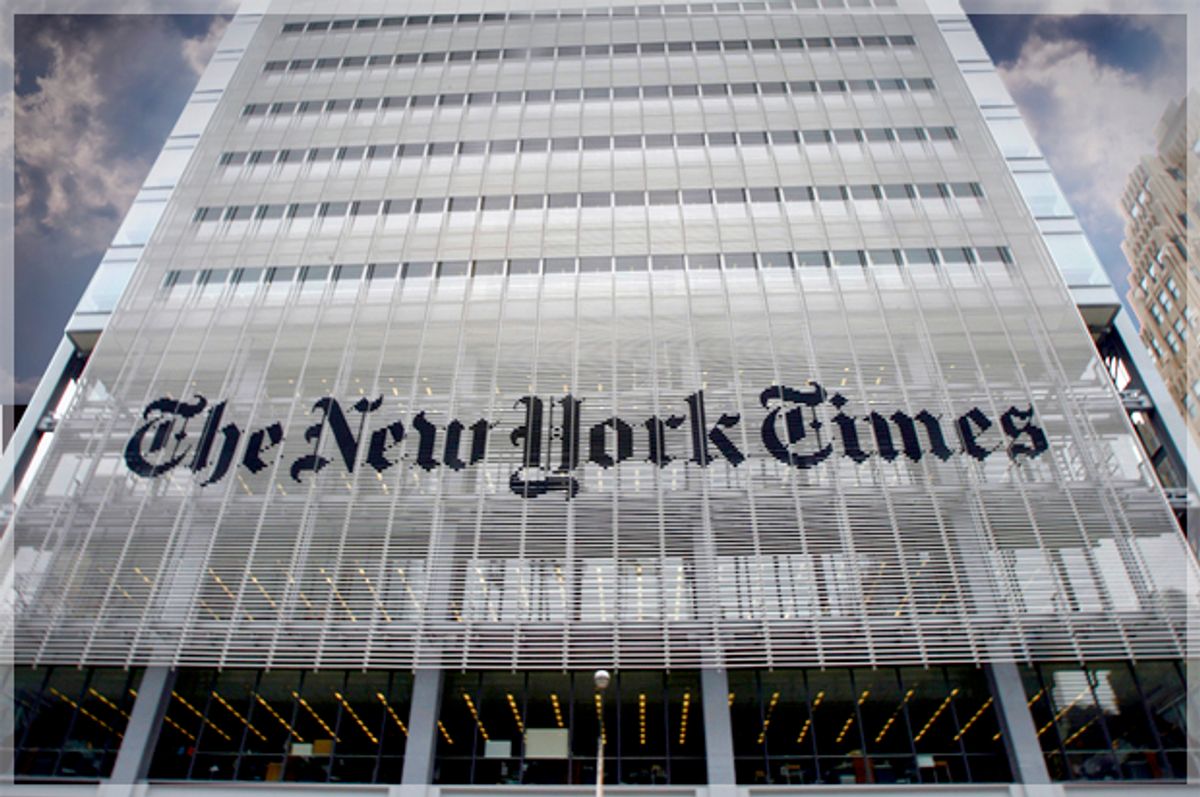 The Times regularly fails to mention that the Palestinian territories have been illegally occupied by Israel since 1967. It often uses euphemistic language to describe Israel’s illegal activity, dubbing lands unlawfully seized by Israel in violation of international law “disputed” territory.

Rights activists have been so frustrated by the publication's skewed reporting that, in February, activists from progressive Jewish human rights groups created a very convincing-looking fake edition of the Times to protest its coverage of Israel-Palestine.

Criticism was reignited on Thursday, after the U.S. newspaper of record once again called into question Israel's illegal occupation.

Two of the members of the Democratic Party's platform drafting committee who were appointed by Bernie Sanders criticized Israel on Wednesday, condemning its occupation and war crimes in Gaza and calling for a more even-handed approach to the Israel-Palestine conflict.

In its report on the comments by the committee members — Cornel West, the renowned scholar and activist, and James Zogby, a longtime pro-Palestinian advocate and president of the Arab American Institute — the Times misleadingly implied that there is debate around Israel's almost five-decade-long military occupation.

In reality, the entire international community, including the U.S., has acknowledged since the occupation began in 1967 that it is illegal.

This did not stop Times reporters Jason Horowitz and Maggie Haberman from writing the word "occupation" in scare quotes in the article, leading to backlash from journalists.

Pulitzer Prize-winning journalist Glenn Greenwald slammed "The New York Times’s (and Clinton campaign’s) abject cowardice on Israel" in an article in The Intercept, calling the use of the scare quotes "grotesque."

On social media, Greenwald and other journalists called out the Times and its reporters.

An activist in the occupied West Bank wrote in response, "If I'm not living under occupation then I'm living under an Apartheid state. Which one is it?"

Greenwald responded by embedding the activist's comment and cc'ing Maggie Haberman, one of the co-authors of the Times piece.

"The refusal to use the word occupation without scare quotes is one of the most cowardly editorial decisions the New York Times has made since refusing to use the word 'torture' because the Bush administration denied its validity (a decision they reversed only when President Obama in 2014 gave them permission to do so by using the word himself)," Greenwald wrote in his article.

"This is journalistic malfeasance at its worst: refusing to describe the world truthfully out of fear of the negative reaction by influential factions," he added.

Later, without explanation, the Times removed the quotes around "occupation." It did not add an editor's note to the article.

The original version, with the quotes, still appears on page A1 of the print edition of the Times, however.

The entire international community, including the U.S., has acknowledged that Israel's occupation is illegal. Soon after the occupation began in 1967, and in the 49 years since then, the United Nations has explicitly said this.

U.N. Security Council Resolution 242 was passed unanimously in November 1967, just five months after the June Six-Day War, with the support of the U.S., U.K., France, USSR and more. Recognizing Israel's annexation of the West Bank, Sinai Peninsula and Golan Heights as illegal, the Security Council resolution demanded that Israel withdraw from these territories.

Today, almost 50 years later, the Israeli military still occupies the West Bank and Golan Heights, and illegally continues to colonize these territories with settlements. After a series of wars with Egypt, Israel reached a peace treaty in 1979 to return most of the Sinai and to withdraw its illegal settlers. Until 2005, however, Israel also maintained its occupation of the Gaza Strip.

Israel withdrew from Gaza in 2005, but legal experts and rights groups say the strip remains under effective occupation, under an almost decade-long crippling Israeli blockade that U.N. experts have said is illegal.

"Use of the word 'occupation' [is] not remotely controversial because multiple U.N. Security Resolutions, such as 446 (adopted unanimously in 1979 with three abstentions), have long declared Israel the illegal 'occupying power' in the West Bank and Gaza," Greenwald noted in his piece.

"Unsurprisingly," he added, "newspapers around the world — such as the Wall Street Journal, The Guardian, the BBC, the LA Times — routinely and flatly describe Israeli control of the West Bank and Gaza in their news articles as what it is: an occupation."

But not The New York Times. Greenwald continued: "This craven posture is particularly appalling as Israel just this week has taken an even harder turn toward extremism, prompting its former Prime Minister Ehud Barak to warn that Israel has been 'infected by the seeds of fascism.' While the former Israeli prime minister issues warnings that grave, establishment Democrats are petrified of even the most tepid stances."

This is not the only form of bias the Times has been accused of. In March, journalists similarly condemned the newspaper, which endorsed Hillary Clinton for president, for bias against Bernie Sanders.