Peter Thiel calls it "philanthropy": Going after someone you don't like isn't a public service 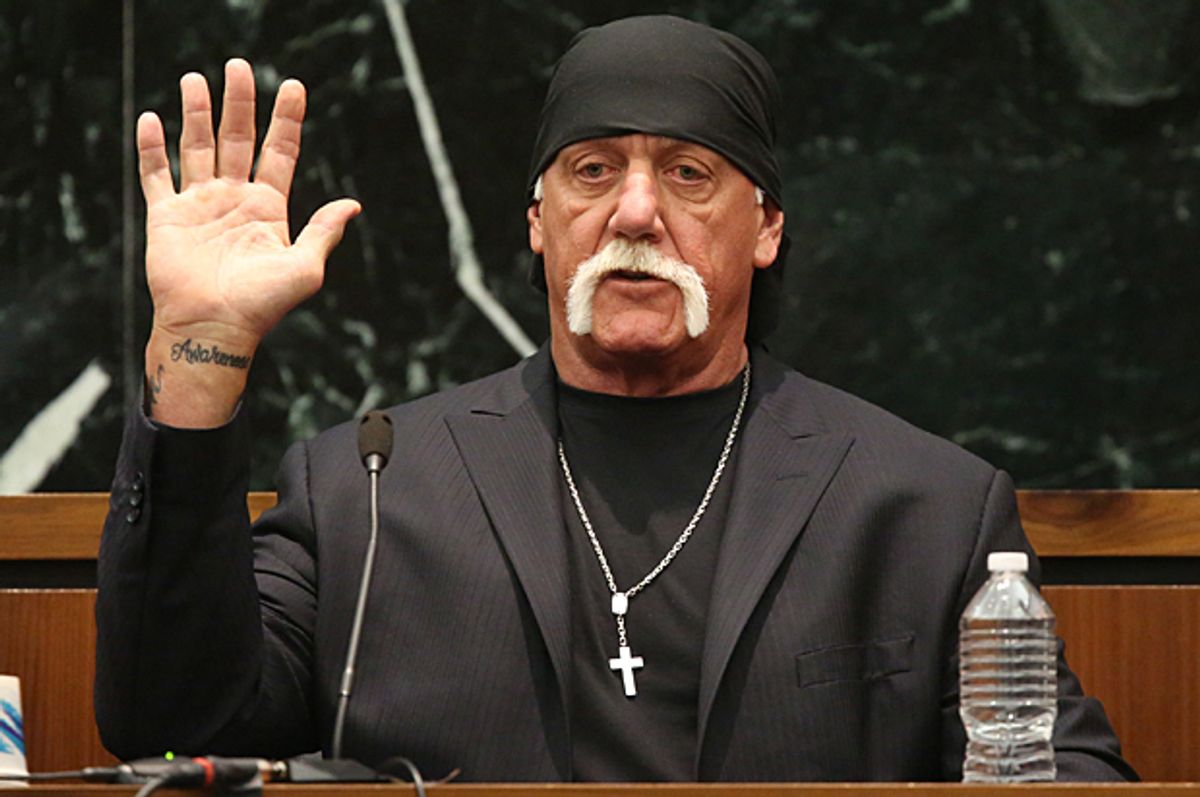 Terry Bollea, aka Hulk Hogan, takes the oath in court during his trial against Gawker Media, in St Petersburg, Florida March 8, 2016. (Reuters/John Pendygraft)
--

The case of Hulk Hogan suing Gawker Media over a leaked sex tape started out strangely. It got stranger still when it turned out that Peter Thiel – a Silicon Valley billionaire whose politics espouse free speech and who has given money to a journalism organization – funded a suit that could put Gawker out of business.

And now that Thiel has spoken to The New York Times about the suit, acknowledging his role and describing his motivation, it’s gotten even weirder. Of at least, it’s the strangest use ever of a term that tech moguls like to toss around – “philanthropy.”

According to the Times, “Mr. Thiel said he considered his financial backing of the cases against Gawker to be ‘one of my greater philanthropic things that I’ve done. I think of it in those terms.’ “

Now, maybe he’s just kidding around. But if we look at what philanthropy means to today’s Silicon Valley, compared to what it used to, the term may make sense as a dead-sincere statement.

The most famous of the philanthropists from the original Gilded Age was Andrew Carnegie, a sharp-elbowed steel baron – and nobody’s idea of a nice guy -- who decided to give just about all of his wealth away late in his life. He gave $43 million to libraries alone, founded the Carnegie Endowment for International Peace, and helped fund various schools and trusts and entities that have added up, over the years, to nearly $2 billion. The Carnegie Corporation, for instance, funded Children’s Television Workshop, which makes “Sesame Street.”

Carnegie’s article “The Gospel of Wealth” encouraged other rich men to give some of their money away. Many libraries, universities, museums, theaters, and symphony halls exist because of this impulse. Oil baron John D. Rockefeller funded all kinds of things, and helped wipe out several diseases through funding medical research.

Silicon Valley has its own style of philanthropy, most of which is well-intentioned and some of which has led to real progress on issues like poverty.

But tech billionaires have also funded the STEM push (an ambiguous effort which sometimes involves degrading the humanities and arts) and charter schools (which can bring good things to a district but also can de-professionalize teaching.)

Some of it is even more boldly self-serving. Venture capitalist Marc Andreessen, an investor in Airnbn, has said that “Thanks to Airbnb, now anyone with a house or apartment can offer a room for rent. Hence, income inequality reduced.” There may be good things about the service, but somehow I am unconvinced that he is being selfless here.

A classic case is the way Twitter donates money to nonprofits, while threatening to leave San Francisco unless it’s given an enormous tax break that will cost the city an estimated $56 million – many times more than the $338,000 donation.

And the philanthropy typically comes around the same time frustration with the way these companies end up leading to skyrocketing rents and the evictions that follow.

You hear some of that tone when Thiel explains his reason for funding Hogan’s suit. This is the Times, again:

Mr. Thiel added: “I can defend myself. Most of the people they attack are not people in my category. They usually attack less prominent, far less wealthy people that simply can’t defend themselves.” He said that “even someone like Terry Bollea who is a millionaire and famous and a successful person didn’t quite have the resources to do this alone.”

Wow – so now he’s fighting for the dispossessed.

But only in Silicon Valley could a libertarian – someone supposedly dedicated free speech and a free press – work to shut down a media empire and call it a public service.