The future queen dares to "recycle" and critics are baffled 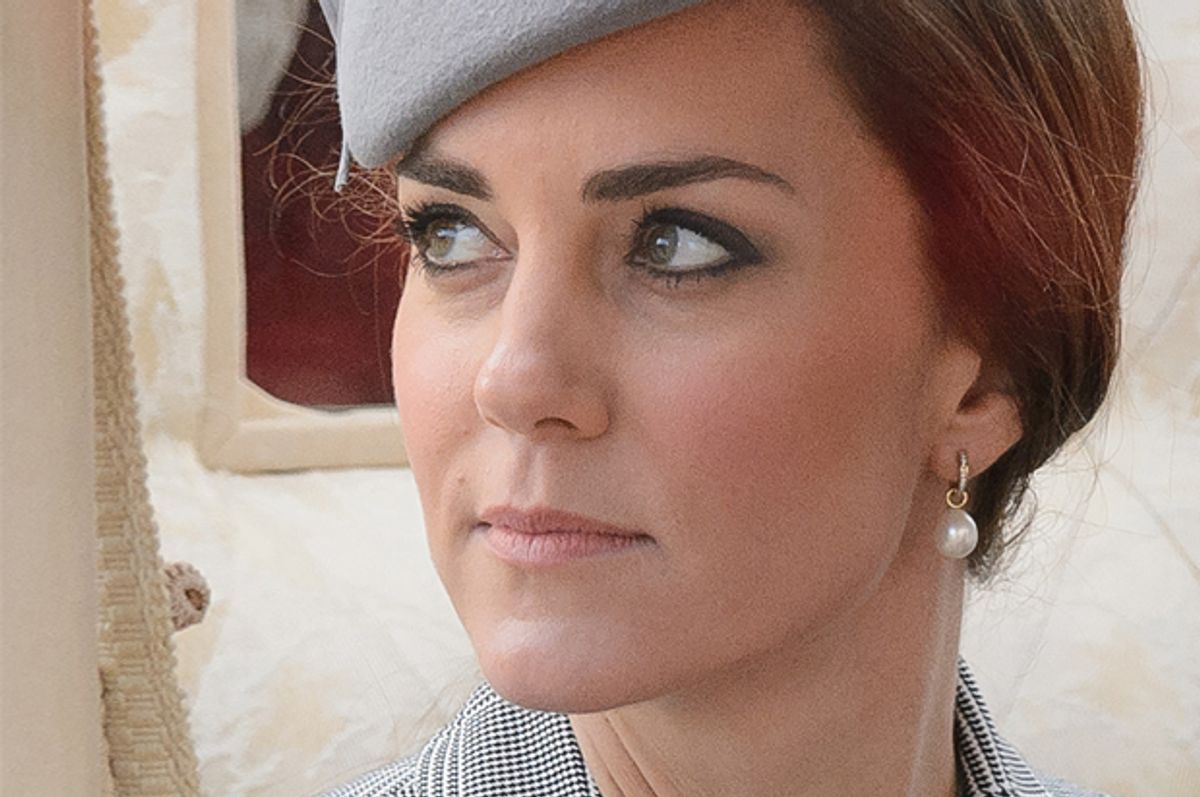 I wonder what it must be like to live in a world in which disappointment looks like a famous woman wearing the same thing twice.

Catherine, Duchess of Cambridge — still more informally known by her maiden name Kate Middleton — is one of the most stylish women in the world. With her shampoo commercial hair and her finely tuned sense of British elegance, she knows wherever she goes there will be a phalanx of fashion police waiting to scrutinize her look from head to toe. And frankly, she brings her A game every single time, whether she's rocking mom chic in skinny jeans and boots or nailing it in edgy evening wear. But lately, the woman whose husband and son will one day be kings of England — a job that has about as much current practical value in the world as being beeper salesmen — has been raising eyebrows among royal watchers. Because the duchess has been re-wearing her ensembles. The horror!

Middleton has been throwing the sartorial world into a tailspin lately. In the past month, she's stepped out in the same pink Alexander McQueen dress she wore two years ago on her tour of Australia and New Zealand. Then she did an appearance in the a different McQueen -- the one she'd worn to her son's christening a full three years ago. And you don't even want to know how often she's pulled out that blue Zara blazer. She's even, instead of just setting it on fire as soon as she'd let it touch her body once, been seen lately in the same green Catherine Walker coat. Yes, not only does the duchess wear the same clothes, she wears clothes that are sometimes… a few seasons old.

Writing this week for E!, Francesca Bacardi asked, "Is It Time for Kate Middleton to Stop Recycling Clothes?" As Bacardi concern trolled, "Yes, she is trying to live life normally, and wearing the same outfits on a loop is epitome of normalcy, but at the end of the day she is royalty — why not take advantage?… because as glamorous as her dresses and skirts are, they do eventually get stale no matter how you try to change up the accessories." Wearing the same thing twice = "stale." The New York Daily News and Hello! magazine keep a running tab of her "recycled" outfits. Or as the rest of us call it, things she's worn in the past. But at least Cosmopolitan generously gives Middleton respect for her bold choices, saying this week, "Thank you for reminding me that repeating an outfit is not a crime." If it was, wouldn't everyone be in jail? For perspective, consider that in 2014,  a male Australian newscaster revealed he'd worn the exact same suit on television every day for a year and nobody'd noticed. As he put it, "No one gives a s__t."

I grant you that I myself am not exactly a Middleton-caliber fashionista. Yesterday I was already out of the house when I realized the yoga pants I'd so thoughtfully pulled out of the dirty laundry pile were on inside out. I challenge you to find a single item of clothing in my wardrobe that doesn't have a pizza grease stain on it. I challenge you. And I get that people who wear tiaras as part of their job description are held to a higher standard of glam. But the royal family has also long understood its role as a standard bearer for the nation's collective sense of restraint and decorum. This is a family whose monarch saves her leftovers — and stores them in Tupperware.  So if Mrs. Prince William wants to bust out the same coat — a coat from a long ago moment when "Mad Men" was still on the air, even — more than once, she's hardly being a damn hippie. She's being, in fact, very much a future queen.