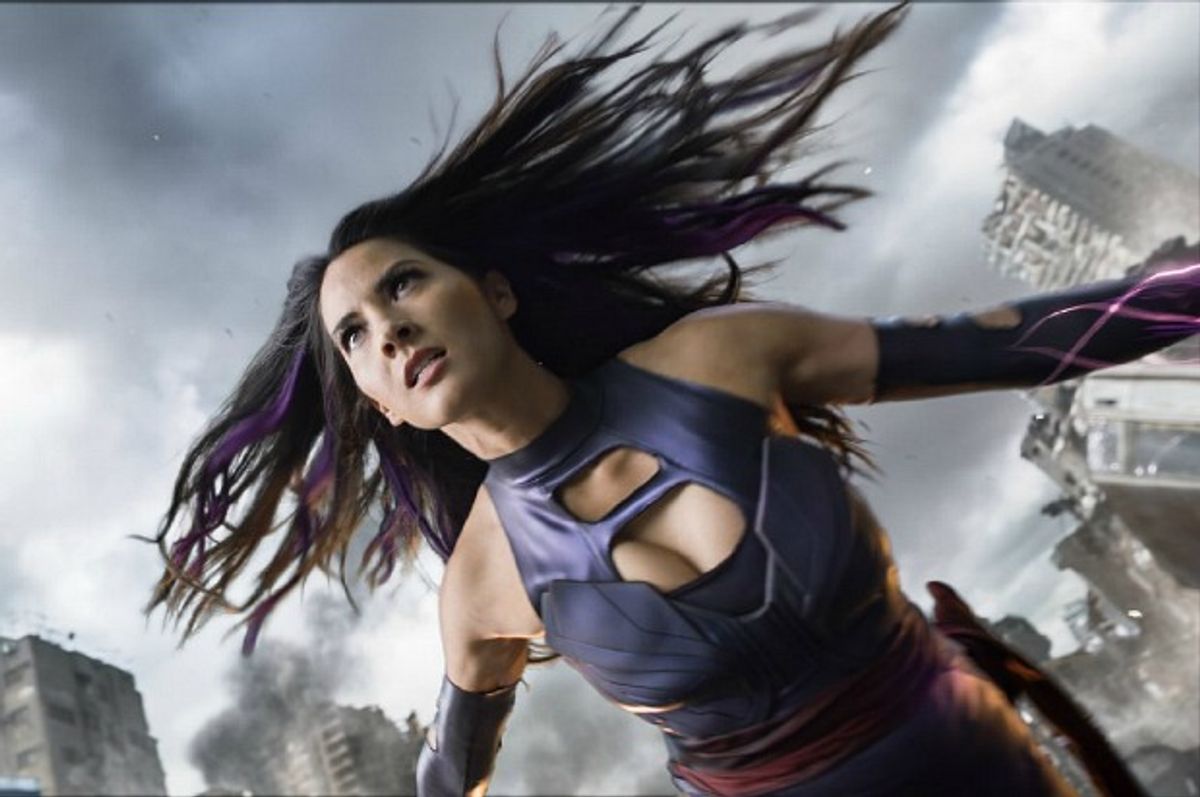 When a group of teenage mutants decide to break out of Professor Charles Xavier's boarding school in Westchester County for a day, circa the summer of 1983, they do what all good teenage mutants would do: Hit the mall in a borrowed convertible, striving to keep their shape-shifting and atomic eyeball rays and telekinetic powers under control. They end the day by catching a movie that was then known as "Return of the Jedi" and debating it on the way home. One thing they can all agree on, one of them observes (I think it's super-psychic Jean Grey, played by Sophie Turner), is that the third movie of a trilogy always sucks.

Ha! That's kind of funny because, see ... OK, you get it. People around me at the New York press screening of "X-Men: Apocalypse," which is the third film of Bryan Singer's X-Men prequel trilogy, chuckled a little, but not all that enthusiastically. It wouldn’t be quite fair to say that “X-Men: Apocalypse” sucks. For deeply steeped Marvel Comics aficionados it will probably be fairly satisfying, and there’s no reason on earth why anyone else should even bother. Anyway I am determined to fend off the usual raft of comments announcing that I hate all comic-book movies, along with chocolate ice cream, small sticky dogs and all other forms of fun, and that Salon is doing the world a disservice by not assigning someone who loves all comic-book movies indiscriminately to love them in pixellated prose for your enjoyment.

So let me come out boldly and say, no, I didn’t hate this movie. It’s just kind of minor and miscellaneous, with a cluttered cast of random and largely unfamiliar minor X-men and affiliated characters (OK, not unfamiliar to you, maybe) and Oscar Isaac wasted in the role of an invulnerable ancient supervillain who becomes vulnerable just in time for the final showdown. (Like Trump! No, I promise I won’t make this review about the election, or not much anyway.) It’s basically a closing chapter to a feeble trilogy that started out pretty well and then ran out of gas, and now must serve as a prequel to shadowy X-related endeavors yet to come.

Wait, that sounds like I’m saying it kind of sucks. Let’s back that up: This movie doesn’t suck all that much, and Brutus is an honorable man. If we can rate this year’s big summer popcorn tentpole pictures so far (noting, with exhaustion, that it won’t actually be summer for three more weeks), “X-Men: Apocalypse” does not have the proto-fascist pretentiousness of “Batman v Superman: Dawn of Justice,” and while it’s a lot less ambitious it’s also far more agreeable. It’s nowhere near as vigorous or as disturbing as “Captain America: Civil War,” which pretty much sets the 2016 cotton-candy gold standard for Movies That Go Boom, especially in a year with no known Michael Bay works on the near horizon. (Bay keeps on promising that he’s done with the “Transformers” franchise, and keeps allowing himself to be sucked back in for more. It’s his own kind of integrity.)

There are some bits and pieces in “X-Men: Apocalypse” that are genuinely terrific, and show off Singer’s gift for dense plotting and character development. If you’ve been following this series — and as I say, there is zero reason to see this movie if you haven’t — you know that Erik Lehnsherr aka Magneto, the mutant Auschwitz survivor played by Ian McKellen in the original “X-Men” franchise, keeps switching from good to evil and back again, like a quantum particle of superhero-ness. Now played by the ever-excellent Michael Fassbender, Erik is in hiding a decade after his failed attempt to conquer the world in 1973, living a somewhat normal life as a steelworker in Communist-ruled Poland. There are way too many settings early in this movie: Cairo, Berlin, Westchester, a suburban American high school that looks more 1963 than ’83. But the dark Polish saga of dread and death that flips Erik’s switch back to the “Exterminate all the brutes” setting really sticks out. It’s like a miniature Andrzej Wajda film stuck in the middle of a Marvel Comics summer movie. (And if you actually understand that reference, why the hell are you reading this?)

There are somewhat valid storytelling reasons why Singer and screenwriter Simon Kinberg don’t just spin out the tale of Magneto’s struggle, but most of the other stories simply can’t compete. They’re just methods, by and large, of introducing us to new characters and reintroducing us to old ones, which is one of the main reasons why hardcore fans will probably enjoy this movie pretty well and other people will be all, like, “Why am I supposed to care?” At one point the screening audience started clapping for a new arrival when all we could see of him was his bare feet. So we meet the lizard-like guy who can vanish and rematerialize, Nightcrawler (Kodi Smit-McPhee) and Cyclops (Tye Sheridan), a normal American teen who has high-voltage beams shooting out of his eyes, and Quicksilver (Evan Peters), who lives in his mom’s basement but can stop time and move at the speed of light or some Einsteinian approximation thereof.

That stuff is all moderately entertaining, and both Jennifer Lawrence (as Raven and/or Mystique) and James McAvoy (as Xavier) are back, in somewhat limited roles. Rose Byrne’s character, FBI agent Moira MacTaggert, has forgotten her previous connection to Xavier and the X-Men — and guess what, so had I! Even the flashback scenes from “X-Men: First Class” didn’t help much, except by reminding me that that movie, overstuffed as it was, was a lot less boring than this one. There's some guy with metallic angel wings (Ben Hardy) and a faintly kinky dominatrix-type with an electronic whip (Olivia Munn) and plenty more besides. But the real problem with “Apocalypse” is less the laundry list of characters than the dull gray vacuum in its center, in the form of the evil entity played by Isaac, who was apparently ancient and deeply tedious by the time of the ancient Egyptians.

I understand that there’s some deep X-Men lore at work in the legend of En Sabah Nur, first of the mutants, but at least in this screen telling it simply doesn’t work. Some enterprising dudes from the Pharaoh’s palace guard succeed in walling him up inside one of the pyramids for a few thousand years, so he’s obviously not as all-powerful as he thinks. Once His Leathery Eminence wakes up (thanks to what looks like a giant circuit board left behind by aliens) and starts entombing people alive in walls or floors or any other surface available, the Baked Enchilada briefly seems like he might make a truly terrifying villain. But as good as Oscar Isaac is, he never identifies a character here, because like most of those guys the Hungry Desert Popsicle is all big talk and angry bluster and a super-obvious blind spot: We will disarm these paltry humans and wipe away their so-called civilization, mwoo-ha-ha-ha! Whoops, except for the part I forgot about.

So he is kind of like Trump then, except honestly not as scary. If you super-secret government scientists really do have Weapon X caged up somewhere, please let him out!