Building a Palestinian "Idol": A subtle fable of cultural survival and pop-culture triumph 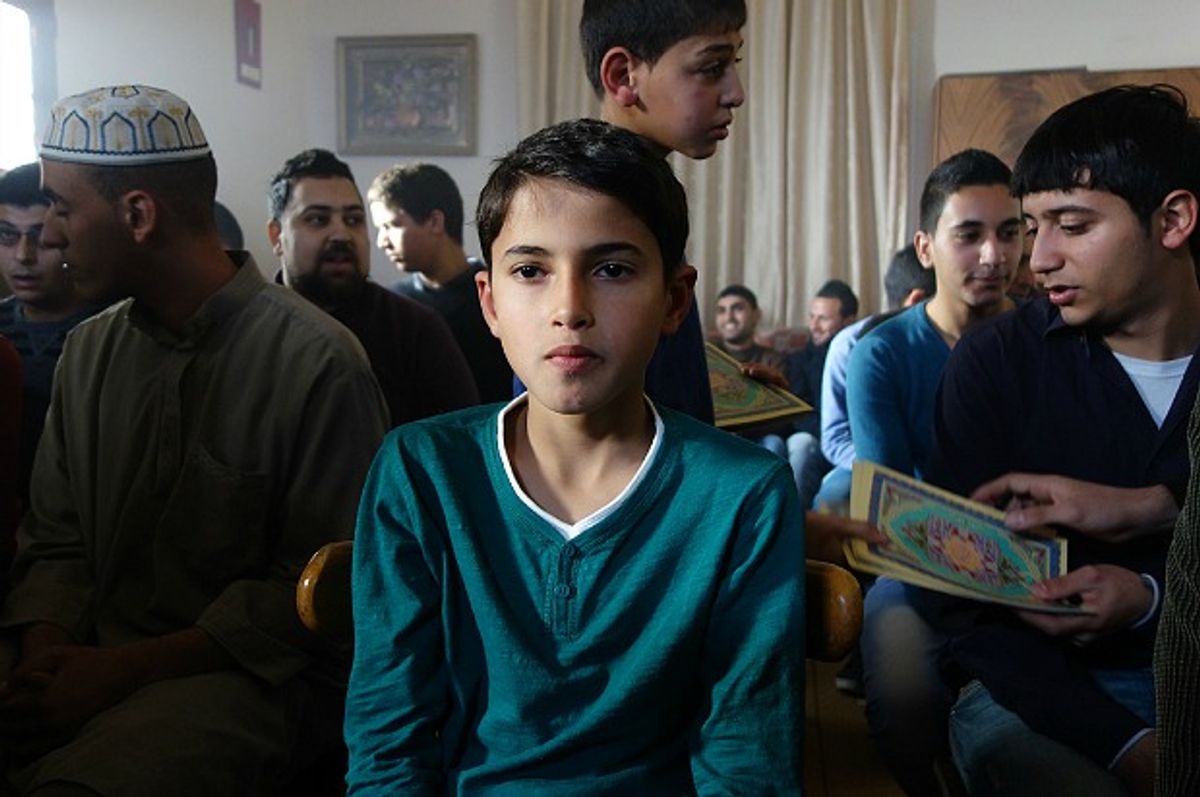 “This place sucks,” the gangly, handsome hero tells his friends, sounding exactly like the would-be dreamboat pop star of every rags-to-riches showbiz fable ever made. Except this guy’s name is Mohammed Assaf (played by the fine young Arab actor Tawfeek Barhom), and the place where he lives really does suck, probably worse than a small town in Kansas or the back streets of the Bronx or the slums of Dublin or the other places such a story might be told. Mohammed has spent his entire life in the Gaza Strip, first under Israeli occupation and then under the dysfunctional, semi-autonomous Palestinian Authority.

In one of the best and most telling scenes of Hany Abu-Assad’s film “The Idol,” Mohammed sits behind the wheel of his day-job taxi and watches a bunch of guys in colorful uniforms sprinting through the rubble left behind after Israeli bombing. Are they Hamas militiamen, or arms smugglers? Nope. They’re using the demolished buildings as a site to practice their awesome parkour skills. Gaza is a place where life is simultaneously normal and not normal, where kids grow up just as much infused with pop culture as kids in Beijing or Boston but where absolutely everything, beginning with basic perceptions of reality, has been distorted by war, occupation, poverty, crime and religion.

“The Idol” is a fictionalized retelling of the unlikely story of the real Mohammed Assaf — a 22-year-old from Gaza who competed on the Egyptian TV show “Arab Idol” in 2013 — and on the surface it appears to treat the political context purely as background. Major events like the Israeli withdrawal of 2005, the Hamas takeover of 2007 and the first Gaza war of 2008-9 are never directly mentioned. The film is structured as a conventional, inspirational biopic (maybe too much so) and was made with an assemblage of international financing from Britain, the Palestinian Authority, the Netherlands, the United Arab Emirates and Qatar, which usually guarantees anodyne filmmaking inoffensive to all.

But below the surface “The Idol” is all about the connections between geography, destiny and culture, as were Abu-Assad’s previous features, the 2013 “Omar” and the controversial 2005 “Paradise Now.” Both of those films received foreign-language Oscar nominations because of their self-evidently serious and challenging subject matter: “Paradise Now” was a nail-biting drama about a young Palestinian who becomes a suicide bomber (and was widely misinterpreted as endorsing his actions), while “Omar” turned that story upside down, in the form of a devious psychological thriller about a Palestinian fighter who becomes an Israeli informant. After being accused by Israelis and American Jews of justifying terrorism, and then being accused by Palestinians of apologizing for treason, no doubt Abu-Assad was happy to make a movie almost everyone would find agreeable.

That said, “The Idol” is still an Abu-Assad film, meaning that it's a deliberately ambiguous story about the contradictions and conundrums of Palestinian life, which all reflect the social and cultural distortion of Israeli occupation but cannot be boiled down to political formulas. We can start with the fact that Abu-Assad was not allowed to shoot in Gaza by local authorities. He was born as an Arab citizen of Israel, and although he now identifies as a Palestinian, his legal status remains complicated for both sides. After “Omar,” largely shot inside Israel, he is still viewed with suspicion by some Palestinians. (For this film, he apparently used locations in the West Bank and an unidentified Arab country, probably Jordan.)

Both in real life and in the movie, Mohammed Assaf presents himself as the unheard voice of the Palestinian people. His improbable Frank Capra-style saga of sneaking into Egypt with a forged visa and bluffing his way into the “Arab Idol” competition — which is pretty much true, but almost too far-fetched for the movies — was embraced by ordinary people throughout the Arab world. But one of Abu-Assad’s points is that Mohammed had to pursue the path to stardom all by himself, because he came from a corrupt and atrophied society that doesn’t work, and that seeks to blame all its problems on outside forces. When Mohammed and his vocal instructor visit one of Gaza’s richest men to ask for financial backing, the guy barely pretends to listen to their ardent, nationalistic pitch. “What do I get out of this?” he demands, before retreating into a garish Trumpian mansion so vast that Mohammed gasps, “Is this a house or an airport?”

During Mohammed’s first appearance on the low-rent local variety show “Palestinian Star,” he had no way to get from Gaza to Ramallah in the Fatah-controlled West Bank, where the program is shot. So he performed via a hilarious combination of low-tech and high-tech, over a Skype connection on computers running from a gasoline-powered generator. (Gaza was suffering one of its frequent power outages, either out of Israeli vindictiveness or Palestinian incompetence or both.) Different viewers will inevitably have different experiences of “The Idol” and what it’s really “about,” but for me Abu-Assad is subtly twisting the knife in both sides at the same time: He perceives a relationship of mutual hatred and mutual dependency between Israelis and Palestinians, which has damaged both people perhaps beyond repair.

It’s more difficult to perceive the levels of irony and subtlety at work in “The Idol” than in Abu-Assad’s previous films, partly because for the first half of it he works almost entirely with kids, telling the story of young Mohammed’s early years in something like the spirit of “Slumdog Millionaire” or François Truffaut’s “Small Change.” But even in these seemingly carefree early adventures Abu-Assad tweaks convention, as with Mohammed’s irresistible tomboy sister Nour (Hiba Attalah), who plays soccer with boys in the street and even plays guitar in Mohammed’s preteen wedding band. (That would be less likely to happen, I imagine, in today’s more stringently Islamic Palestinian culture.) When Mohammed and Nour finally get the money together for real instruments, they’re ripped off by a vicious and violent smuggler (Abu-Assad regular Ashraf Barhom), who later becomes a born-again Muslim, his sins apparently washed away.

To some extent, the improbable happy ending of Mohammed Assaf’s story seems at odds with the more complicated and discordant tale Abu-Assad is telling about the nature of life several decades into entrenched Palestinian exile and occupation. But for him I think they are two halves of the same story. He told audiences at the Toronto Film Festival he was more excited to see Assaf perform in “Arab Idol” than he was when “Omar” won a major award at Cannes. I think I understand why. Assaf’s pop-culture transcendence was a coming-of-age moment for Palestinians, a sign that they could triumph in the most delicious, delightful and unlikely of contexts, despite a broken society built on institutional hopelessness. Abu-Assad’s films make the same point, in a darker register.