Apes may be legal "persons," and the meat industry struggles to move past cruelty -- a new era in animal rights? 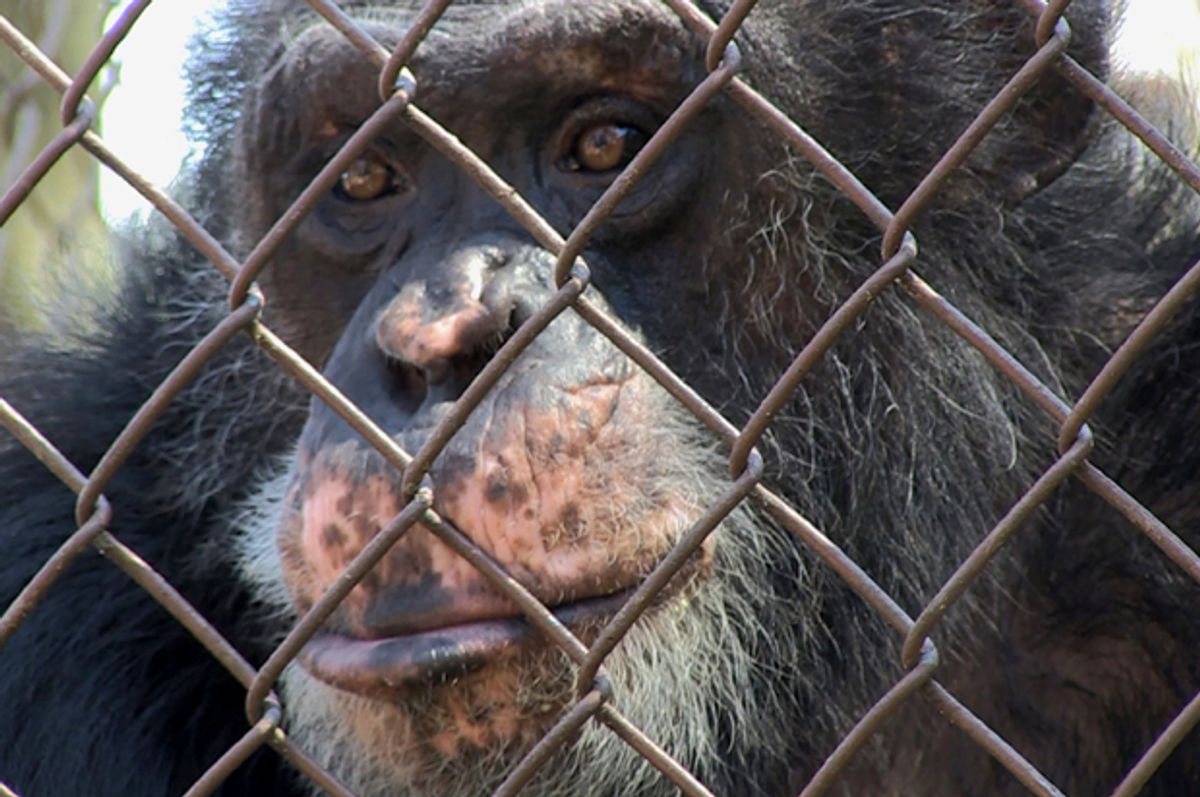 A captive chimpanzee in a roadside zoo, as seen in "Unlocking the Cage" (Pennebaker Hegedus Films)
--

That human beings are exceptional among the animal species found on our planet seems beyond dispute. Other animals may use implements, build things and alter the landscape, but not even remotely close to the same extent. Whether or not we are unique, on some spiritual or epistemological level — as human civilization has long taken for granted — increasingly seems to be in doubt. One paradoxical measure of the remarkable extent of human consciousness, perhaps, can be found in the fact that we are capable of asking such a question.

Our relationship to the other animals with whom we share the planet is changing rapidly in the 21st century, perhaps more rapidly than we realize or than we can control. Wayne Pacelle, who is the president of the Humane Society of the United States and something of a lightning-rod in the animal-rights world (a term he scrupulously avoids), makes this point toward the beginning of his simultaneously invigorating and maddening new book, “The Humane Economy: How Innovators and Enlightened Consumers are Transforming the Lives of Animals.” More and more consumer behavior is driven by concern for animal welfare and rising awareness of inhumane practices, Pacelle argues, from the now-shuttered orca shows at SeaWorld to the gestation crates used by pig farmers.

At the same time, the Western consumer economy is driven by animal exploitation on a previously unimaginable scale, which has made meat, eggs, milk and other animal products available to nearly everyone. Pork production in the U.S. was a $22.5 billion business in 2012 (the most recent year for which I could find official numbers), representing roughly 113 million slaughtered hogs in that year alone. More than 9 billion chickens are killed for food in North America every year, a number significantly larger than the human population of the planet. Until very recently the only thing most of us knew about all that meat production is that we didn’t want to see it up close. But a growing public consciousness that “animals matter,” to use Pacelle’s purposefully vague phrasing, means that “every enterprise built on harming animals today is ripe for disruption.”

Disruption of a different order is envisioned by Steven Wise, the veteran animal-rights activist and attorney at the center of a fascinating new HBO documentary called “Unlocking the Cage.” For many years Wise was depicted either as a charming eccentric or a dangerous crackpot for arguing that in certain circumstances certain higher-order mammals could be considered “persons” under the law, as corporations and ships and rivers and various other inanimate or imaginary objects have sometimes been. Students barked at him, he cheerfully recalls, as he walked to his classroom as a Harvard law professor.

But Wise too has benefited from the shifting public consciousness Pacelle discusses; as the rumpled lawyer observes in the film, while he wasn’t paying attention he slipped into the mainstream. Last year Wise and his organization, the Nonhuman Rights Project, persuaded a New York judge to issue a historic ruling suggesting, however tentatively, that a captive chimpanzee named Tommy might possess the basic common-law right of habeas corpus. In other words, as a sentient, self-aware and autonomous being (although not a human being), Tommy was entitled to a hearing on the legality of his imprisonment. For reasons of procedure and precedent, Tommy was not freed, and his owner subsequently moved him to another state. But the ripple effects of that ruling will be felt years into the future, and a judge in Argentina has already made a similar finding regarding a captive orangutan.

Pacelle and Wise represent disparate wings of the animal-rights and/or animal-welfare movements, and their differences reach from pragmatic approaches all the way down to fundamental questions of philosophy. But they would cautiously agree (or at least I think they would) that they’re generally on the same side when it comes to the long arc of history and our startlingly rapid shift in consciousness when it comes to animals. As I suggested earlier, you won’t catch Pacelle saying that animals have rights at all, let alone challenging the longstanding legal principle that animals can only be objects or property, things rather than persons.

For the Humane Society, with its near-exclusive focus on human economic behavior, such questions are irrelevant and divisive. Pacelle rejects “discredited ideas about animals existing for whatever use we humans concoct,” but never specifies what new ideas about animal existence, or animal selfhood, might replace those. He clearly believes that we have a moral obligation to avoid “calculated cruelty” and unnecessary harm, but that’s a tepid secondary theme in his book. It isn’t activism or advocacy, Pacelle argues, that’s driving the transition to a “humane economy” and a new social understanding of our relationship with the animals we confine or consume.

It’s almost amusing to encounter this in the ideologically overheated climate of the 2016 election, but Pacelle is a true evangelist for capitalism. His great change agent is nothing less than Adam Smith’s famous “invisible hand” of supply and demand in the marketplace, and ultimately the enlightened self-interest of entrepreneurs, investors, corporate executives and other economic stakeholders. (It’s impossible not to lapse into business-school-speak after reading this book.) In all fairness, Pacelle has accomplished remarkable things with his business-friendly, non-confrontational approach, and anyone concerned with the lives and deaths of animals should be grateful he’s out there.

Pacelle recently made headlines by cutting a historic deal with SeaWorld, which first agreed to abandon its theatrical orca shows and then to end all captive breeding of the giant cetaceans, while funding the Humane Society’s campaign against whaling and dolphin hunting. Through sustained campaigns of pressure on major meat and poultry producers and the fast-food chains and food-service vendors that purchase the bulk of their product, he has wrought enormous and unprecedented change in those industries.

No one would claim that pork and poultry production in the United States has suddenly become cruelty-free (and Pacelle says no such thing). But most pork producers have stopped confining full-grown sows with piglets in two-foot by seven-foot crates roughly the same size as a human coffin, and the poultry industry is gradually moving away from imprisoning birds in foul, overcrowded cages. One can certainly argue that more needs to be done, and one can definitely question Pacelle’s dewy-eyed faith in market economics as an antidote to animal suffering. Activist groups like PETA have criticized the Humane Society’s overly snuggly deal with SeaWorld, along with Pacelle’s overall strategy of seeking accommodation with abusive industries. But when it comes to his work with giant food producers, this feels like one of those cases where you can’t let the perfect become the enemy of the pretty damn good.

When Pacelle expends half a chapter in praise of lab-grown Franken-meat or “in vitro meat” — meaning an experimental biotech product grown from animal tissue, but not involving the death of an animal — I’m sorry, but that’s where I draw the line. He’s right that the immense human appetite for meat, which extends deep into our evolutionary past and shows no signs of diminishing, poses a nearly insoluble problem for animal advocates. We can, and certainly should, reduce the amount of meat the world consumes, for many reasons. (Beginning with the ridiculous American lust for beef.) We can, and certainly should, take on the moral responsibility of caring for the animals we raise for food properly while they’re alive, and killing them in as humane a manner as possible. But only a longtime vegan (as Pacelle is) and a devoted new-economy nerd would seriously propose Soylent Green as a major part of the solution.

If Steven Wise gets his way, of course, maybe all the beef cattle will sue us for their freedom, and run wild through the malls. That was more or less the reaction of the right-wing blogosphere after the Tommy ruling of 2015, which was hysterically misinterpreted as “erasing the species boundary” or arguing that an ape possessed full human rights under international law. As we see in “Unlocking the Cage,” Wise made no such argument in the New York case or anywhere else, and has always made clear that a “person,” as a legal construct, is not the same thing as a human being. In the orangutan case in Argentina, the judge essentially invented a new concept, that of a “nonhuman person” who possesses certain natural rights your sofa or your iPhone cannot possibly have, but is not a full human subject.

One can certainly argue that opening this door leads down a slippery legal slope to an unknown destination, which is exactly how government agencies and other defendants in these cases have responded. But as Chris Hegedus and D.A. Pennebaker’s film makes clear (they’re the veteran documentary team best known for “The War Room” and Bob Dylan’s “Dont Look Back”), the meaning of personhood is not a settled matter under the law, and judges and opposing counsel have found all sorts of technical ways to duck that question. Wise, meanwhile, has marshaled impressive cutting-edge scientific evidence to support his claims. So far his work has focused exclusively on large primates, elephants and cetaceans, animals now generally understood to have high-level cognitive abilities, complex social relationships and something comparable to human consciousness.

For Pacelle and the Humane Society, no doubt, the question of confined or mistreated chimps and elephants can be boiled down to more manageable dimensions that won’t bleed into unexplored philosophical terrain. If we decide it’s morally wrong to keep such creatures locked up, then public opinion and the marketplace will find a way to set them free. Wise is demanding that we go further than that, and look closely at the basis for such a moral decision. Do we feel compassion for a suffering ape or whale (or a dog, perhaps) because we see a dumb beast in pain, or because we recognize a being closely akin to ourselves? If it’s the latter, that would signal a revolution in human consciousness, and a revelation that we’re not alone.

"Unlocking the Cage" is now playing at Film Forum in New York. It plays June 2-5 & June 9-12 at Time & Space in Hudson, N.Y., and opens June 10 at the Gene Siskel Film Center in Chicago, June 24 in Boston and Los Angeles, July 1 in Cleveland, July 7 in Portland, Ore., July 8 in Seattle and Winston-Salem, N.C., and July 29 in Pelham, N.Y., with HBO broadcast and home video to follow.