Cops will always protect cops: This is why prosecutors and grand juries let the police off easy

The racial dynamic is clear to everyone, but city governments have had enormous difficulty reining in their police 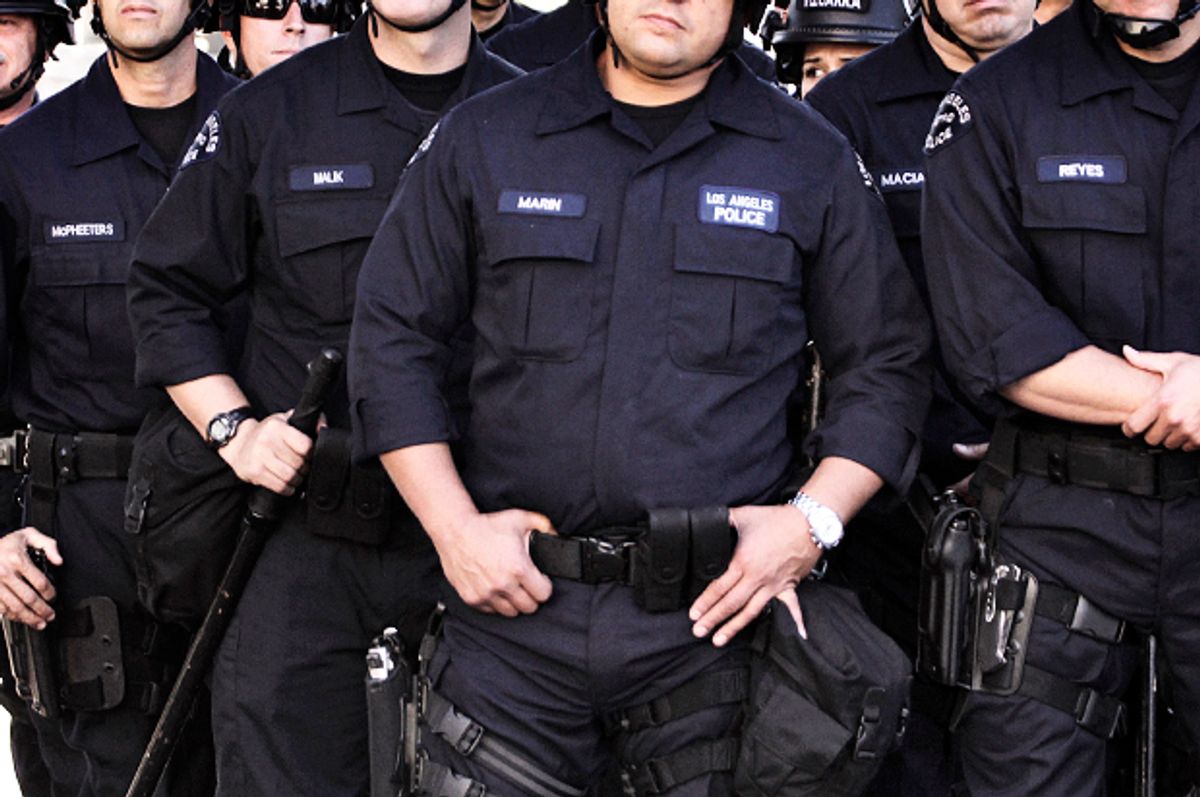 A 2014 Daily News study of 179 fatalities involving on-duty NYPD cops over the previous fifteen years found that only three cases led to indictments and only one to a conviction. Where the race of the victim was known, 86% were black or Hispanic. The current racial dynamic has been familiar since at least the 1950s, but, throughout history, city and state governments have had enormous difficulty reigning in and punishing police misconduct.

Over a century ago, in 1894, the first sensational political investigation of the modern era revealed in shocking and unprecedented detail how the police force managed New York City’s lucrative vice economy, extorted payoffs from respectable businesses, and enjoyed near total immunity from charges of police brutality. Established by the New York State Senate, the Lexow Committee heard public testimony from nearly 700 witnesses, representing all walks of New York life, on how the police force abused their role to protect and serve.

The investigation included an unprecedented inquiry into police violence against individual citizens, brutality that always went unpunished. On October 2, 1894 investigation chief counsel John W. Goff presented a startling sight that put human—and battered—faces on police immunity from the law. In what The New York Times described as “a spectacle without parallel, as amazing as it was unique,” Goff summoned ninety uniformed policemen to appear, each of whom had been convicted by the Police Board of Commissioners over the past three years for brutality. Many of their most recent victims, who were still bandaged and bloodied, were present as well. A long procession of cops told how the Police Board found them guilty of clubbing, punching, kicking, or choking citizens, only to be fined a few days’ pay. None were dismissed from the force. The entire day’s testimony, Goff declared, “goes home to the very question of the rights, the liberties, and the safety of the citizens of New York.” The accumulated weight of the day’s display, the Morning Advertiser concluded, demonstrated to the world that “New York has the most brutal police force on the earth.”

This public exhibition on brutality—victims, perpetrators, and the impunity they enjoyed—could only scratch the surface. There were many cases, including rape and pedophilia, deemed too shocking for open hearings, but they were notorious in the tenements and streets of the Lower East Side and other neighborhoods. One cop convicted in 1891 of raping a 14 year old boy was merely fined three days’ pay, a total of $8.21.

The Lexow investigation framed the question of police brutality purely as a by-product of corruption, a symptom of a police force that saw itself as above the law. Immigrant Italians and Jews, and poor people generally, suffered the brunt of police violence. But the greatest outrage was reserved for police clubbings of respectable, middle class citizens on the street or at public events. Yet the investigation never addressed the most widespread practice of Gilded Age police brutality: the direct role cops played in crushing strikes by clubbing strikers and their supporters, protecting scab labor, and spying on unions. As class conflict intensified during the 1880s, growing more violent across the city and the nation, political and business leaders routinely unleashed the police to violently suppress unions and political dissent.

In March 1886, for example, drivers and conductors on the Dry Dock streetcar line, desperate to reduce their workday to 12 hours and raise their daily wage to $2, went on strike. The company president immediately asked Police Superintendent William Murray to intervene. On March 4, thousands of angry strikers and their supporters filled Grand Street from river to river, determined to prevent the running of any Dry Dock streetcars. Murray stationed 500 policemen along the street and personally commanded another 250 to accompany a lone horsecar from its East River stable across Grand Street, to the Hudson, and back. Demonstrators blocked the tracks with overturned carts, ash barrels, and paving stones, while rocks and eggs rained down on the police from tenement windows. When they reached Allen Street, Murray suddenly yelled, “Charge!” and instantly hundreds of clubs came down on the heads and shoulders of everyone in sight, including well-dressed bystanders and women shoppers. The beatings and street fighting continued for over two hours as the car completed its purely symbolic round trip. Two days later some 15,000 drivers, conductors, and stablemen from other car lines walked off their jobs in a sympathy strike, tying up the city’s entire transportation system. The companies soon broke the union drive through indictments of union leaders and the continued massive police intervention.

What was clear in the Gilded Age is also true of police abuses today: the extreme reluctance of prosecutors and grand juries to punish cops found guilty of abusing their authority. After the Lexow revelations, some forty police officers, including an inspector and fourteen captains (nearly half of the department’s total) faced indictments on charges of bribery, extortion, and neglect of duty. Many of these cases had dragged on for years. But by 1897 not a single New York police official was in jail and all the men dismissed from the force won reinstatement with back pay. The courts consistently held that evidence supplied by persons of “disorderly character” was insufficient for conviction of bribery or extortion.

Today, the use of body cameras by police, the creation of civilian complaint review boards, and the evidence provided by witness cell phones may make it easier to gather evidence against members of the police force who act with undue violence or corruption. But better technology is no panacea. If we are to learn anything from the results of the Lexow investigation, nothing will improve the current situation without a commitment to apply the law firmly and consistently to rank and file cops and police officials.

Daniel Czitrom is a Professor of History at Mount Holyoke College with a special focus on the history of New York City. He served as the historical advisor for the BBC America show “Copper” and is the author of the forthcoming New York Exposed: The Gilded Age Police Scandal that Launched the Progressive Era.