The unapologetic introvert: I had to leave the U.S. to stop pretending to be an extrovert

America values the bold and gregarious, but when I moved to Switzerland, I found my people—no fake smiles required 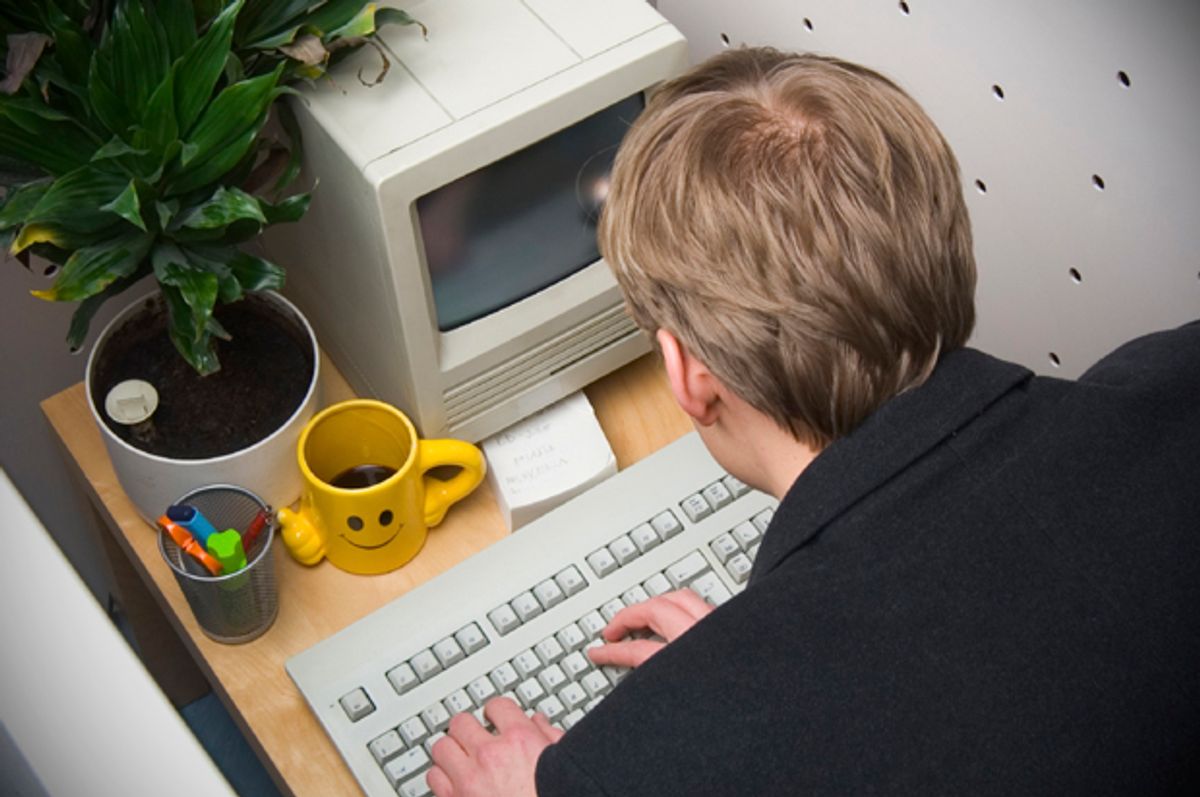 I’m an introvert, you see. Please excuse me, but I enjoy quiet, low-key environments. I like working by myself. And I’d rather listen than talk.

Unfortunately, time has taught me that these are not positive traits in the United States. After all, this is a country where universities assign term papers as group projects. If a person isn’t even allowed to write a paper in private anymore, then I don’t know why I thought a career writing print and television advertisements would be a good idea, but I did.

As a copywriter who considers solitude a key component to creativity and who prefers quiet contemplation to group brainstorming sessions, I know from experience that the average American workplace doesn’t want the real me—and the feeling is mutual. Because at this point in my life—I’ve decided I don’t want them either. I’m tired of apologizing for my personality, especially since it has nothing to do with the quality of my copywriting, so today I work where I am free to be myself—at my own company.

If I weren’t an introvert living in an extroverted world, I probably wouldn’t be working for myself right now. As Susan Cain writes in "Quiet: The Power of Introverts in a World That Can’t Stop Talking," “Our lives are shaped as profoundly by personality as by gender or race. And the single most important aspect of personality–the ‘north and south of temperament,’ as one scientist puts it–is where we fall on the introvert-extrovert spectrum.”

For an introvert, American job descriptions can be painful to read. No matter if a company is looking for a computer scientist or a salesman, the job description always sounds like it’s for the latter: “Enthusiastic go-getter wanted to serve up their skills and cheerlead a small team to stratospheric success.”

Job descriptions reflect the work culture of the company posting them and the greater culture too. In case you haven’t noticed, the United States promotes what cultural historian Warren Susman calls a “Culture of Personality.” The American emphasis on personality explains why so many of our politicians and even (sadly) our book authors are celebrities first. In America, being noticed in front of a crowd of strangers is worship-worthy. We love the loud ones, even if they are insulting one another’s wives in order to get a job. Screaming matters. Substance does not.

Cain writes, “Today we make room for a remarkably narrow range of personality styles. We’re told that to be great is to be bold, to be happy is to be sociable. We see ourselves as a nation of extroverts—which means that we’ve lost sight of who we really are. Depending on which study you consult, one third to one half of Americans are introverts.”

If you can’t imagine how there could possibly be so many introverts in this country, it’s probably because most introverts in America are still doing what I once did: pretending to be extroverts. And most have been doing so from a young age. Because the bias for extroverted personalities in American life begins early: in school.

We show and we tell. We arrange our desks in groups or pods. We work in teams to do everything from calculus to creative writing. And then we criticize those who’d rather sit by themselves, work by themselves, or think before they talk.

“She’s too quiet,” my teachers would tell my parents at conferences, as if I had a rare disease instead of a personality trait shared by a good portion the population. But being told I was quiet made me feel ashamed and deficient and only heightened the pain of any attempts I made to be louder.

The American tendency to criticize quiet schoolchildren has been going on for decades. "The Organizational Man," a 1956 bestseller by William Whyte, explains that both parents and teachers worked together in earnest to try to get quiet children to come out of their shell.

By 1993, nothing had changed for introverts. I was proof: My suburban Chicago high school English teacher had a participation sheet where she put an X by your name every time you spoke in class. As if all utterances were equal. As if a good grade in literature were not about quiet reading and contemplation, but about public speaking. No wonder I didn’t major in English.

Being introverted doesn’t necessarily mean being shy, although I would argue they often go together. As a child I was shy—I feared social judgment in many situations. For example, I didn’t like to raise my hand in that high school English class, even if I knew the answer.

While I’ve mostly outgrown my shyness, I can’t outgrow my introversion. Because introversion is partly how someone responds to stimulation. And no matter how many times (okay, okay, only three) I tried to have fun dancing at a crowded bar in college, I didn’t. Somehow, I knew I couldn’t—even if my culture kept telling me that I should.

Nevertheless, as most introverts in America do, I eventually learned to fake extroversion. This was not without pain. At my first copywriting job at a well-known creative American ad agency, I smiled loud good mornings while I cringed inside. I cheered when I played office ping-pong while I secretly wished for a quiet corner. And I learned to speak up at meetings even if I had nothing to say.

My fake extroversion rewarded me in America, so I never considered that it might not work in other parts of the world. When I moved to Switzerland in 2006 and was given my first copywriting assignment at an ad agency in Zurich, I reacted as any well-trained American introvert-turned-extrovert would.

“Well, this project will be exciting,” I said, holding the briefing and smiling as enthusiastically as I could.

But rather than smile back and sing the praises that even a briefing for a bank advertisement would inspire from an American advertising account executive, my Swiss colleagues stared at me with blank expressions.

Thinking they didn’t understand me, since I was the first native English-speaking copywriter they had ever hired, I attempted a little German. I wanted to make a good impression.

“Schön,” I said, smiling again, pointing at the pile of papers.

My Swiss colleagues shook their heads at my enthusiasm as if I had mental issues. And then they retreated into their private offices and shut their doors, leaving me with nothing but the silence I needed to realize that they were right: I had major mental issues. I had been trying to be someone I wasn’t for 28 years. That’s when I smiled again, but this time, for another reason: I had finally found a culture that would not force me to be anything but my introverted self at work.

A few years later, I received a note from a fellow American copywriter I had worked with at my former agency in the States. “What should I do?” she wrote, “I’ve been here over five years and the agency won’t promote me because they say I’m not ready to be a senior copywriter—they say I’m still too quiet.”

My answer: move to a country that respects introverts and stay there. Because while she was being left behind for being a writer who wasn’t loud enough, I was being paid more money to work at a different Swiss ad agency where all the writers sat in a room so quiet, I practically had to apologize for the noise my fingers made on my keyboard. I was pregnant at the time and eating constantly, but if I so much as crinkled a wrapper, the entire room looked over at me with disdain.

So I’d go to the office cafeteria to rip open my food packaging guilt-free. Together with a colleague of South African origin, we’d laugh over the agency’s writers’ room. We nicknamed the room “the church,” but the truth was, I loved working in an environment that rewarded those who treasured quiet thought, even if I had to go 5,000 miles from home in order to find it.

The Swiss workplace was wonderful for someone like me: you never had to make small talk—no one in Swiss culture made small talk. And if you acted overly excited about almost anything work-wise or even not work-wise, the Swiss put you in your place. No one played ping-pong; there was no ping-pong. Productivity was rewarded—wasting time being a cheerleader was not.

Even copywriters and art directors worked much more autonomously in Switzerland than they did in the U.S. As a copywriter in Switzerland, I usually brainstormed alone and an art director designed what I came up with later. This contrasted sharply to my American advertising experiences working in copywriter-art director teams, where the team spent every working minute together in a room as if the only way to create an idea was to do it in a group.

The Swiss valued quiet—it was reflected in the country’s hiking obsession—over 60,000 kilometers of trails crisscrossed the tiny country and if you weren’t enjoying their solitude every Sunday, you were culturally amiss. Reserved and contemplative, the Swiss didn’t even smile at each other when passing by on the street—which, thanks to my initial fake extroversion, I had to learn the hard way. Loud enthusiasm had no place in Switzerland—unless you happened to be a church bell.

One time, an American friend and I were talking while waiting for a tram in Zurich. An older Swiss woman was sitting on the bench next to us. After a few minutes she pointed at us and covered her ears. “So loud,” she said. “Why so loud?”

Even normal American speaking voices coming from introverts are loud from another culture’s viewpoint.

Now that I’ve moved back to the U.S., rather than fight American extroversion in the workplace, I’ve created my own company where I continue my comfortable introversion. Every day, I work remotely with Swiss and German clients who expect my enthusiasm to show in my writing for their brands—not in my voice or on my face.

My self-made introverted working life is so wonderful that some days I forget how much extroversion still matters in America. But recently, while visiting some family friends, one of them shook her head after I told her about my international copywriting business.

I explained that not being surrounded by people when I was trying to write was actually fantastic, but she didn’t get it. I was once again an introvert in an extroverted world—the only difference was, 38 years later, I had found and accepted my place within my own culture—even if it had taken another culture to teach me that my personality deserved respect too. That’s why, instead of defending my ways of working or being these days, I quietly, in true introvert style, smile with the satisfaction of someone who is proud and unafraid to be the person she was born to be.