Dear Internet experts on gorillas and parenting: Save your outrage — there's no "Justice for Harambe" 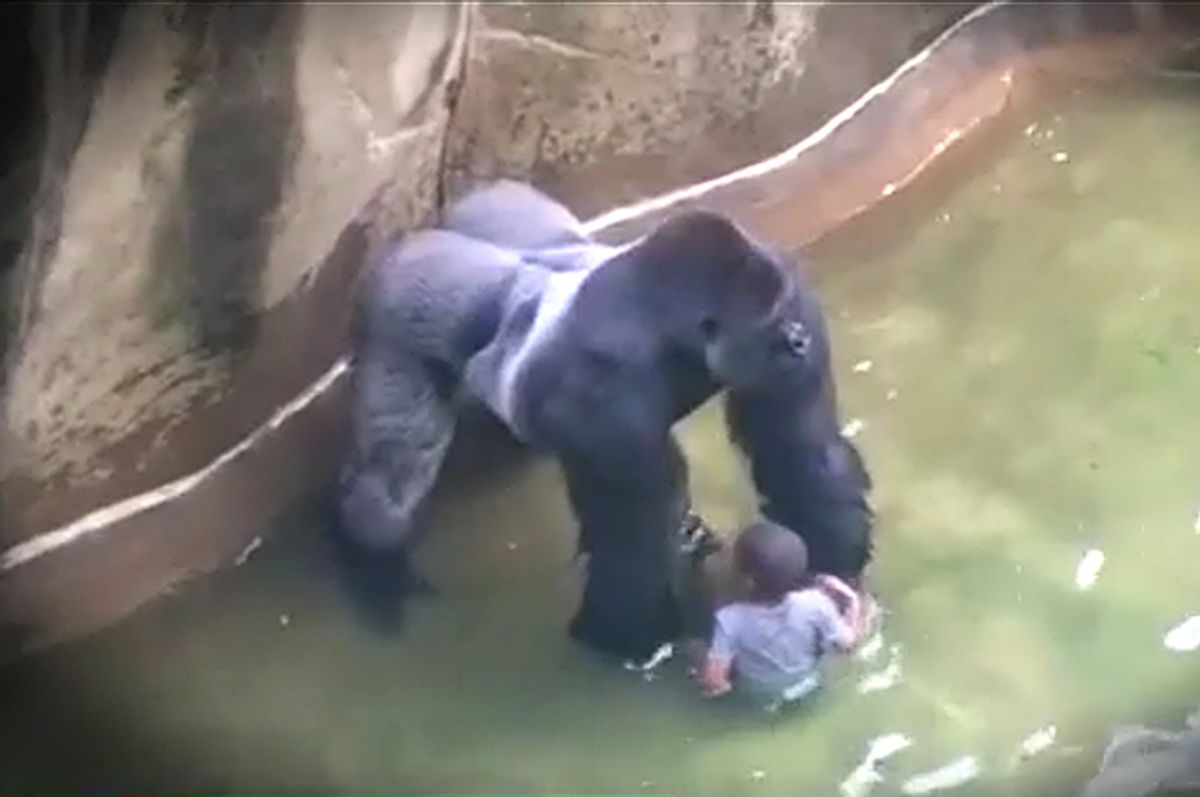 If only we could harness all the outrage across social media and use it as an alternative energy source, we could reverse climate change overnight. Imagine, for example, if there were a way to redirect the all the different flavors of fury that erupted this weekend after the Cincinnati Zoo made the decision to shoot and kill an endangered silverback gorilla after a preschool-aged boy got into its enclosure.

The drama began on Saturday, when, according to one witness, the boy said he wanted to jump into the gorilla's space. The mother, who was tending to other children, reportedly told him, "No, you're not." But he somehow managed to crawl under a railing and fall into the moat of the habitat — and naturally, onlookers captured what happened next on video. At times, it seems the 400-pound Harambe is being gentle and protective of the child, but at others, he can be seen dragging him through the water, possibly agitated by the screams of the crowd.

As zoo director Thane Maynard told reporters later, "It seemed very much by our professional team, our dangerous-animal response team, to be a life threatening situation. And so the choice was made to put down or shoot Harambe. And so he's gone…. It's a sad day all the way around." But he added, "The right choice was made. It was a difficult choice…. the team did a good job and they made a tough choice and they made the right choice, because they saved that little boy's life."

Maynard said the choice to kill the animal was made out of concern that in an "agitated" situation, tranquilizers might take too long to take effect, and he could potentially have had a "dramatic response." The child, meanwhile, was brought to the hospital with no serious injuries. His family has issued a statement that "We are so thankful to the Lord that our child is safe. He is home and doing just fine. We extend our heartfelt thanks for the quick action of the Cincinnati Zoo staff. We know that this was a very difficult decision for them, and that they are grieving the loss of their gorilla."

Precisely how did that boy get into the enclosure? I don't know, and you don't either. I would however wager that if that if a small child can quickly and efficiently get into a dangerous animal's space, the animal's facility could improve its safety measures.

But in the immediate aftermath of the incident — and the death of Harambe — anger and blame has been flying thick and fast. A "Justice for Harambe" Facebook page to "raise awareness of Harambe’s murder" already has over 118,000 likes, with commenters asserting that "Shooting an endangered animal is worse than murder." Protesters outside the zoo have called for a boycott, and to "Keep brats out of habitats." PETA has issued a statement that "Harambe "paid with his life for others' negligence."

And because sitcom star Kaley Cuoco ("Big Bang Theory") certainly knows better than a professional response team, she wrote on Instagram, "If you watch the footage, you see this gorgeous animal holding that child's hand. Do with that, what you will. As sad as this makes me, a part of me is happy for that amazing creature doesn't have to live in captivity another day."

The boy's parents, meanwhile, have been inevitably named — and their photographs released — by some news outlets, along with the fact that his father has a drug trafficking conviction and "a lengthy criminal history." At least one newspaper has reported going to the family's house to attempt to get a statement. The implications are clear in the anger and blame being spread around — bad parents, bratty child, bad zoo. They don't deserve privacy or (how ironic) consideration about their continued safety. The boy's mother has reportedly now deleted her Facebook page, after a deluge of aggressive comments -- and even her place of work has had to do likewise.

It's clear that Harambe was a victim of a terrible situation. His former caretaker at the Gladys Porter Zoo in Texas, Jerry Stones, told the New York Post this week that Harambe "was nurturing. He would care for his sisters and his mother. He was not a mean animal." But "meanness" has nothing to do with a 400-pound animal, a body of water, and a small child, just as "neglect" isn't the guaranteed reason that child got into that space. And all the internet outrage in the world won't bring Harambe back, or make a hard decision a simple one. "The child wasn’t under attack, but all sorts of things could happen in a situation like that," Thane Maynard said this weekend. “He certainly was at risk.”