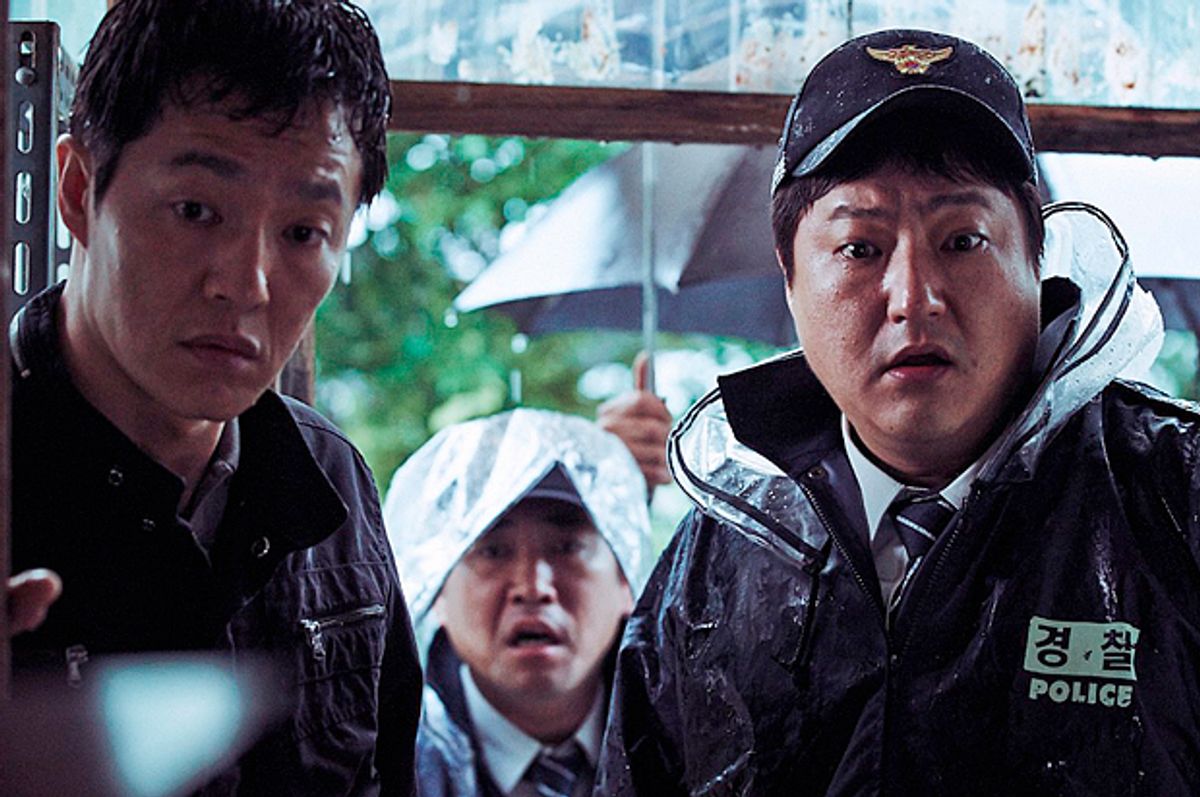 Forget the inflated Trumpian moral dilemmas of Superman and Captain America. The summer’s most powerful and most disturbing thriller has arrived, in the form of an intensely atmospheric Korean movie called “The Wailing,” which caused a sensation at Cannes earlier this month and has since become a huge box-office hit in Asia. Unless you’re the kind of person who follows film-festival news and East Asian genre cinema, you’ve probably never heard of Na Hong-jin, who wrote and directed this movie. He has made other terrific movies in a more familiar action-adventure vein, including “The Chaser” and “The Yellow Sea.” But nothing quite like “The Wailing,” because there is nothing quite like “The Wailing.” A whole lot of people will hear about him now.

Anyway, no graduate-level education is required; this is a movie with dark powers of mind control, like the nameless and uncertain entity that appears to have invaded a small mountain town towards the middle of the Korean peninsula. “The Wailing” is something like the most gruesome and gripping Scandinavian crime drama you can imagine, transported to a rain-sodden Asian backwater where everyone’s in a bad mood and science, religion and superstition are locked in uneasy combat. It’s a police procedural and a zombie movie and a tale of demonic possession and a lurid murder mystery and a pitch-black but frequently hilarious comedy about what Karl Marx famously called the idiocy of rural life.

Before it’s over, “The Wailing” is a bunch of other things too, including an agonizing parable of bad parenting gone wrong and a moral and/or narrative puzzler that will keep you guessing days or weeks later. Who was that old guy, and did he cause all that outrageous small-town mayhem? What “really” happens at the climax of the story, when a middle-aged cop and a young priest come face to face with – well, something or other? Faced with a fateful decision that may save his family or send it into horrifying disaster, does our protagonist choose wisely?

It’s not much of a spoiler to say that in this kind of movie the answer to the last question is always likely to be “no.” Whether any wise choice is available to Jong-gu (Kwak Do-won), the paunchy, inept police sergeant at the heart of this twisty and terrifying narrative — now, that’s a much bigger question, and one I can’t address without giving too much away. As for the issue of what “really” happens in this tale of demonic invasion, madness and murder, that one’s easy: It’s a movie, so none of it really happens.

I know that’s an irritating observation, but in this case it’s essential. Asian genre filmmakers have been merging or blending action movies with the contemplative or ambiguous qualities of art-house cinema for at least two to three decades, but “The Wailing” elevates that combination to a new level. It can be appreciated as a purely visceral thrill ride, but it's also a supremely controlled work of narrative indeterminacy told from various characters’ competing points of view, which never quite add up to a complete picture. The more we learn about Jong-gu’s first farcical and then nightmarish family saga, or the series of horrific unexplained murders afflicting the town of Goksung, or the elderly Japanese loner who seems to be involved, the less sure we feel about what’s going on. At the end of the movie Na offers an apparent solution — which comes unglued the more you think about it. Whether you find this uncertainty maddening or invigorating is up to you, but the painful questions of perception and cognition driving this story are probably the movie’s true subject.

Terrible things have started to happen in Goksung before the movie begins, but Jong-gu isn’t much interested. He values his uneventful life, which includes an unhappy marriage, a tepid affair with a co-worker and very little in the way of actual work. (If some version of original sin is illustrated in "The Wailing," it might be about not giving a damn.) One of his fellow cops spins out a disturbing second-hand story about the Japanese newcomer everyone in town suspects of being a ghost or a demon or a serial killer, and then asks breathlessly: “Isn’t that scary?” Jong-gu only grunts, “Scary my ass,” and hurls a string of abusive epithets at his subordinate. Everyone in Goksung apparently curses and berates each other all the time, including Jong-gu’s proper-looking but ferocious mother-in-law. This element of unhinged comedy suggests life has already veered off the rails in ways the townspeople haven’t quite noticed. When Jong-gu’s adorable preteen daughter (Kim Hwan-hee) unleashes a vicious stream of foul language later in the film, maybe it’s a sign of demonic possession, and maybe she’s just trying to catch up with her surroundings.

A series of gothic and grisly murders begins to unfold in Goksung, accompanied by strange spectral visitations and a spreading contagion of insanity and bloodlust. It’s hard to imagine a police department, or a town, less well prepared for such a horror-movie scenario. But the authorities’ feeble effort to blame these gruesome events on a toxic batch of mushrooms doesn’t last long, and local attention turns back toward “the Jap” — seriously, that’s what he’s called in the subtitles — a mysterious old man who lives alone in the forest, played by veteran Japanese actor Jun Kunimura (seen in Quentin Tarantino’s “Kill Bill” movies). Has he been seen at all the sites of outlandish killings, and eating raw deer meat in the woods? Or is that all paranoia and rumor? Meanwhile, Jong-gu encounters a young woman dressed in white (Chun Woo-hee) who claims she has witnessed the killings and can explain them, but who keeps disappearing, provoking yet more abuse from Jong-gu’s superiors.

This peculiar combination of small-town farce and Grand Guignol bloodshed gradually slides from an art-house “Nightmare on Elm Street” more into the terrain of “Silence of the Lambs” and “The Exorcist,” with a touch of Michael Haneke and a lot more of the Bible than you’d expect. If Jong-gu is at least somewhat similar to the protagonist of the Book of Job -- an ordinary man destroyed by mysterious forces for unknown reasons -- it's fair to say the Japanese stranger recalls at least two other Biblical characters.

“The Wailing” builds slowly but inexorably toward the moment when Jong-gu and his colleagues seek revenge upon the Japanese man (for crimes he may or may not have committed), and then into 40 minutes or so of explosive and sustained narrative tension, as the spillover from that event threatens to destroy Jong-gu's family and every last vestige of civilization in this already debased community. It's a virtuoso performance, a gut-wrenching bloodbath and a profound moral mystery. At the end of this haunting, provocative and masterful thriller, you may not be sure whether Jong-gu and his fellow villagers have really been visited by demons — or whether the demons are always here, in all of us.