The Zika scare: Donald Trump's wall is no match for a mosquito 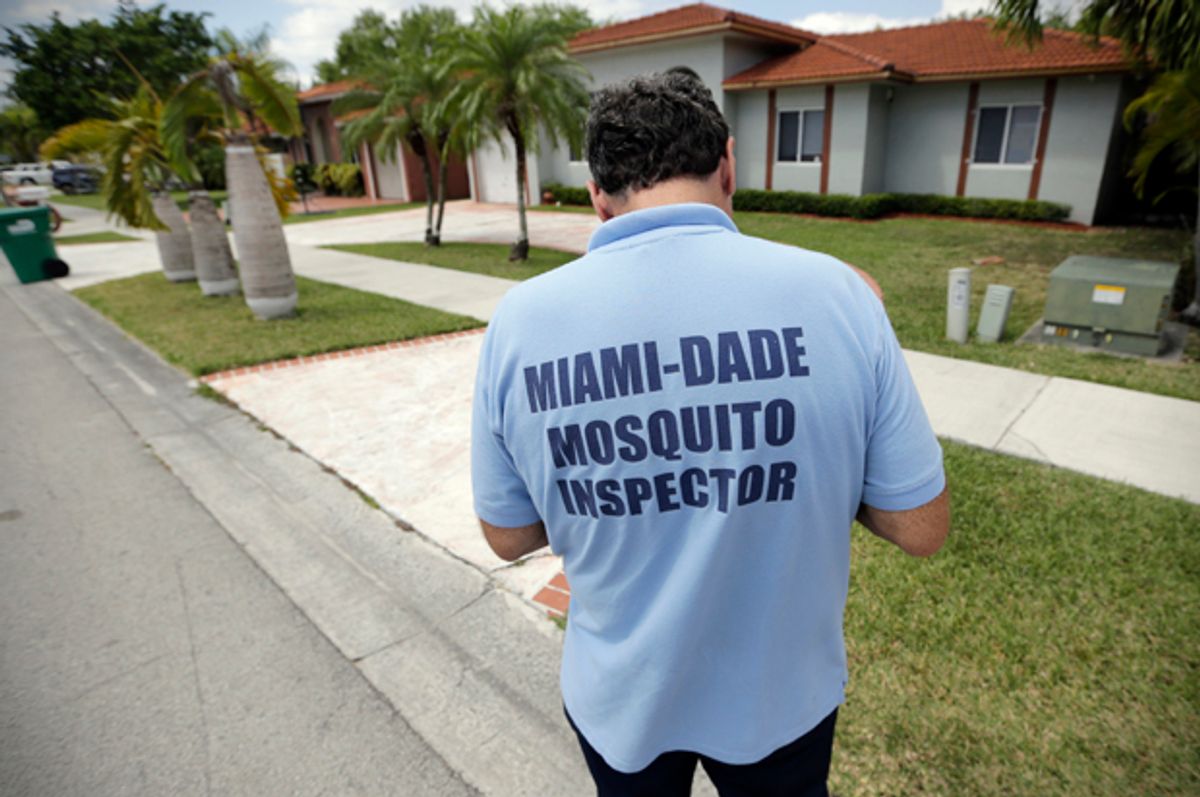 For several years now I have been convinced that we are a profoundly stuck nation, hence my Twitter handle “stucknation.” By stuck, I mean that our nation is so hopelessly divided as to a course of collective action that we just can’t move. We remain a large mammal, stranded in a rushing stream and the switches of time, swatting away Zika infected mosquitos, as the water rises.

Our "democracy’" is on the verge of producing two choices for president most voters can’t stand. The candidates only path to victory is through hyping the fear that the potential election of their opponent prompts in the electorate. This scorched earth campaign will consume hundreds of millions of dollars in a nation where 22 percent of the children live in poverty and so many millions of children in the world at large lack access to basic health care, safe water and basic sanitation.

It is beyond obscene.

We can’t even agree on which direction gets us to higher ground or if we should even bother to head there. Yet, the time has come when our national paralysis is making us vulnerable to something potentially catastrophic in the form of a possible epidemic that could start in the population of the undocumented population of immigrants and the millions of other uninsured people that call the U.S. home.

Nowhere is our stuckness more manifest than in our debate over immigration and public health. With 11 million undocumented immigrants already living here, just by their very proximity to us and our families, their well-being and health is intimately linked to ours. Forget politics. It’s just biology.

No roundup, mass deportation or even internment camps will change this. It is our common humanity that makes us vulnerable to each other, and as a consequence accountable for, and to each other, whatever our status. Disease respects no borders and strikes irrespective of your national origin.

Undocumented immigrants were expressly excluded from the Affordable Health Care Act. Odds are that if someone in this cohort comes down with a seriously contagious disease they won’t be getting the kind of preventative health care that could detect it before it spreads. This punitive act, meant to make the U.S. less hospitable to the undocumented, actually put the entire nation’s health at risk.

Dr. Ram Raju, who leads New York City’s Health & Hospitals, the largest municipal hospital system in the country, says excluding the undocumented from coverage is a major public health mistake. Raju recalled that at a lunch he attended a very conservative attendee asked him why members of the public, who would never choose to use a local public hospital, should have to pay to maintain one through their taxes.

“We were having this nice food in a restaurant and I suggested he look behind the (kitchen) door to see who was cooking the food,” said Raju. “That person is probably one of my patients in the public system. If that guy is not well you're going home with the problem.”

In California lawmakers are considering legislation that would extend health care coverage for more than one million undocumented immigrants that are low wage workers. Higher income undocumented households would be permitted to use their own money to purchase coverage. The bill would require a federal waiver.

Dr.Sara Doorley, who works in a mobile clinic that cares for thousands of homeless and undocumented immigrants living in Silicon Valley, told the Mercury News such coverage was vital for over all societal well being. “Providing care to those least able to afford or access care is both the right and the smart thing. By preventing illness in our community, we help to keep all residents safe and healthy.”

We saw this illustrated in the tragic case of the late Thomas Eric Duncan, the Liberian national, whose fatal ebola case in Dallas resulted in the infection of two hospital nurses. Initially, Duncan was turned away by the hospital that he went to when he began to suffer the symptoms of ebola. Fours days later he had to be hospitalized and isolated. Several days later he was dead.

'Duncan was visiting North Dallas, a part of the city fraught with resettled immigrants and low-income minorities,” wrote Lorraine Sherman Mason in Time. “Texas Health Presbyterian Hospital is not unfamiliar with patients like Duncan: immigrant and uninsured. So when he came seeking medical attention, indicating that he was from Liberia without punctuating his assertion with the possibility of Ebola, he was perhaps perceived as another uninsured patient seeking medical care through the emergency care system.”

It is so easy to forget just how the ebola scourge, and its decimating impact on health care workers, transfixed the world. In that situation, here in the west, we fixated on incoming jet flights from the infected west African nations on the front lines of the outbreak. Now, in the summer months ahead, we have to zero in on nearly invisible mosquitos spreading the Zika virus northward, from southern climes like Brazil and Puerto Rico, to North America and our Gulf Coast states.

Back in February, the World Health Organization declared Zika a “public health emergency of international concern.” According to the Center for Disease Control’s website people very rarely die from contracting Zika. But for pregnant women a zika infection can result in them giving birth to a baby afflicted with misocephaly, (small head syndrome), which can produce a wide array of developmental disabilities and a much shorter life span for the child. Early on the CDC warned pregnant women to not travel to 30 countries in Latin America and the Caribbean.

Even as public health experts warn that time is of the essence to develop a zika vaccine, roll out testing and get mosquito control efforts underway, our Congress continues to bicker over just how much money to spend. The Republican controlled House wants to spend $622 million and the Senate has committed to spend $1.1 billion. (The difference is just a fraction of what we will spend for the 2016 campaign cycle.)

Last weekend, Dr. Anthony Fauci, director of the National Institute of Allergy and Infectious Diseases, told ABC News that more than 500 Americans have already been infected with Zika. also warning that there have been “several hundred” cases that were “locally transmitted” in U.S. Caribbean territories including Puerto Rico.

The CDC reported that the number of pregnant women in the U.S.infected with the Zika virus had tripled, from 48 two weeks ago, to 157 most recently. The spike was the result of the CDC updating their registry to include woman who had been infected with Zika, but had yet to show any symptoms.

“However, recently published reports indicate that some pregnant women with laboratory evidence of a recent Zika infection but without symptoms have delivered infants with microcephaly and other serious brain defects,” the CDC update concluded. The symptoms can include fever, rash, joint pain and conjunctivitis. The virus can be sexually transmitted. Only one in five individuals who get the virus show symptoms.

Fauci called for the need for a “very, very forceful preparation” “The concern is that we all have local transmissions. In other words, people who get infected in the United States, get bitten by a mosquito, but who have never left the continental United States,” warned Fauci.

As Andrew Revkin wrote a few months back in the New York Times, the rapid spread of the mosquitos carrying Zika was the consequence of countries like Brazil (also host of the Summer Olympics), cutting back on their mosquito eradication efforts “just as humanity’s boom in urbanization and global mobility got into high gear.”

“This mosquito species thrives in trash-strewn, puddly cities, bites in daylight (limiting the utility of bed nets) and has long posed a peril by carrying a host of dangerous ailments, including yellow fever, chikungunya and dengue,”wrote Revkin.

The street conditions a hemisphere away can impact the health of a new born here in the U.S. If an undocumented pregnant woman living here in the U.S. is infected by a mosquito carrying the Zika virus, the fate of her American newborn could be at stake.

As it turns out, a wall is no match for a mosquito.