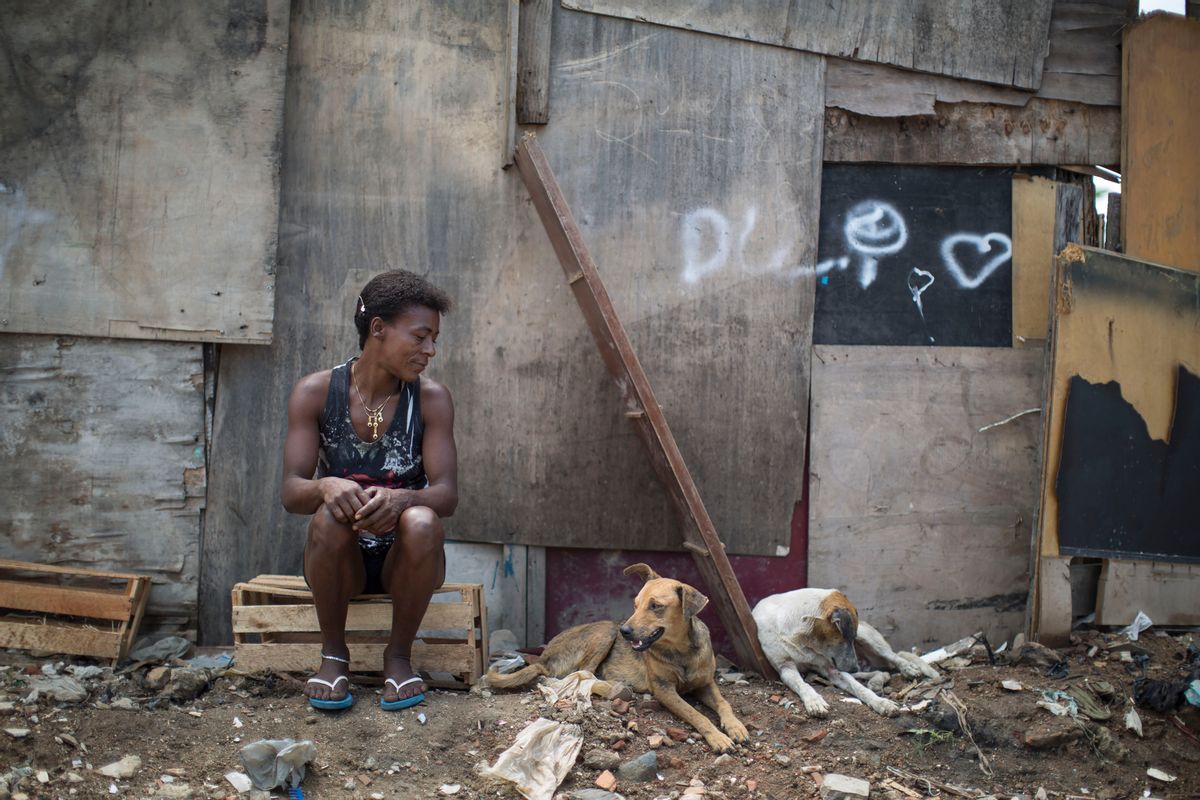 A woman in a Brazilian shantytown (AP)
--

The world's largest evangelist of neoliberalism, the International Monetary Fund, has admitted that it's not all it's cracked up to be.

Neoliberalism refers to capitalism in its purest form. It is an economic philosophy espoused by libertarians — and repeated endlessly by many mainstream economists — one that insists that privatization, deregulation, the opening up of domestic markets to foreign competition, the cutting of government spending, the shrinking of the state and the "freeing of the market" are the keys to a healthy and flourishing economy.

Yet now top researchers at the International Monetary Fund, or IMF, the economic institution that has proselytized — and often forcefully imposed — neoliberal policies for decades, have conceded that the "benefits of some policies that are an important part of the neoliberal agenda appear to have been somewhat overplayed."

"There are aspects of the neoliberal agenda that have not delivered as expected," the economists write in "Neoliberalism: Oversold?", a study published in the June volume of the IMF's quarterly magazine Finance & Development.

In analyzing two of neoliberalism's most fundamental policies, austerity and the removing of restrictions on the movement of capital, the IMF researchers say they reached "three disquieting conclusions."

One, neoliberal policies result in "little benefit in growth."

And three, this "increased inequality in turn hurts the level and sustainability of growth."

The top researchers conclude noting that the "evidence of the economic damage from inequality suggests that policymakers should be more open to redistribution than they are."

In some cases, they add, the consequences "will have to be remedied after they occur by using taxes and government spending to redistribute income."

These statements represent an enormous reversal for the IMF. It is somewhat like the Pope declaring that there is no God; it is a volte-face on almost everything that the IMF has ever stood for.

Since the 2008 financial collapse, widespread rebellions have been waged against these failed neoliberal policies, with Occupy Wall Street in the U.S. and similar grassroots movements around the world.

Before the 1970s, neoliberalism was relegated to the obscure margins of mainstream economics, preached by free-market fundamentalists like Milton Friedman and Friedrich Hayek.

In the last few decades, however, it became the hegemonic ideology. The IMF has been one of the most crucial institutions, along with the World Bank, in the spread of neoliberalism.

By the end of the Cold War, socialist alternatives to capitalism had been brutally crushed in a long series of wars. By the 1980s, with the rise of Prime Minister Margaret Thatcher in the U.K. and President Ronald Reagan in the U.S., neoliberalism had come to dominate the new world order.

Even before the Thatchers and the Reagans, however, there were the Pinochets. The policies the IMF advocated for decades were rooted in extreme violence and repression.

A bloody CIA-backed 1973 coup toppled Chile's popular democratically elected Marxist leader, Salvador Allende, and replaced him with Pinochet. For millions of Chileans, his "economic miracle" was a disaster.

"Chile’s pioneering experience with neoliberalism received high praise from Nobel laureate Friedman, but many economists have now come around to" more nuanced views, the IMF researchers note in their article.

The study was co-authored by three members of the IMF’s research department — Jonathan Ostry, the deputy director, Prakash Loungani, a division chief, and Davide Furceri, an economist.

The researchers don't throw neoliberalism out completely. "There is much to cheer in the neoliberal agenda," they write. But it fails in some crucial regards.

For one, opening emerging economies up to some types of unrestricted foreign capital inflows frequently leads to financial crises, the IMF researchers note, which in turn create large declines in economic output and "appreciably" increase inequality.

These boom and bust cycles are not merely "a sideshow... they are the main story," the economists add.

"Capital controls are a viable, and sometimes the only, option," the IMF concludes. This is a huge reversal. The researchers themselves point out that "the IMF's view has also changed — from one that considered capital controls as almost always counterproductive to greater acceptance of controls to deal with the volatility of capital flows."

Moreover, the study notes that it is often better for indebted governments to allow "the debt ratio to decline organically through growth," rather than to impose austerity. This is another reversal.

The IMF has for many years ordered countries to cut spending, gutting social services in order to pay off debt. This has in turn led to a shrinking of the economy, trapping countries in a spiral of debt. Greece is a painful contemporary example, although there are many more.

Austerity results in "drops rather than by expansions in output." Studies show that, when government deficits and debts are reduced with a fiscal consolidation of 1 percent of a country's GDP, the long-term unemployment rate often increases by 0.6 percentage point and income inequality grows by 1.5 percent within five years.

Taken in conjunction, these effects could lead to an "adverse loop," the IMF warns, where austerity fuels inequality, which decreases growth that neoliberals insist must be cured with more austerity.

"The increase in inequality engendered by financial openness and austerity might itself undercut growth, the very thing that the neoliberal agenda is intent on boosting," the IMF researchers write. "There is now strong evidence that inequality can significantly lower both the level and the durability of growth."

The importance of this study is hard to overstate. The IMF is essentially admitted that many of the policies that it demanded countries implement for decades only made things worse.

The International Monetary Fund appears to be inching toward a more Keynesian economic position.

To be clear, just because IMF researchers acknowledge the economic reality billions of working people in the world intimately understand does not mean the IMF as an institution will act on their research and end these policies — just as the U.S. government does not necessarily act on the research of State Department, which has acknowledged Israel's crimes.

But the IMF's recognition that neoliberalism is not the panacea that cures all economic ills establishes an incredibly significant precedent, and is a huge victory in the fight for economic justice — and in the class war.