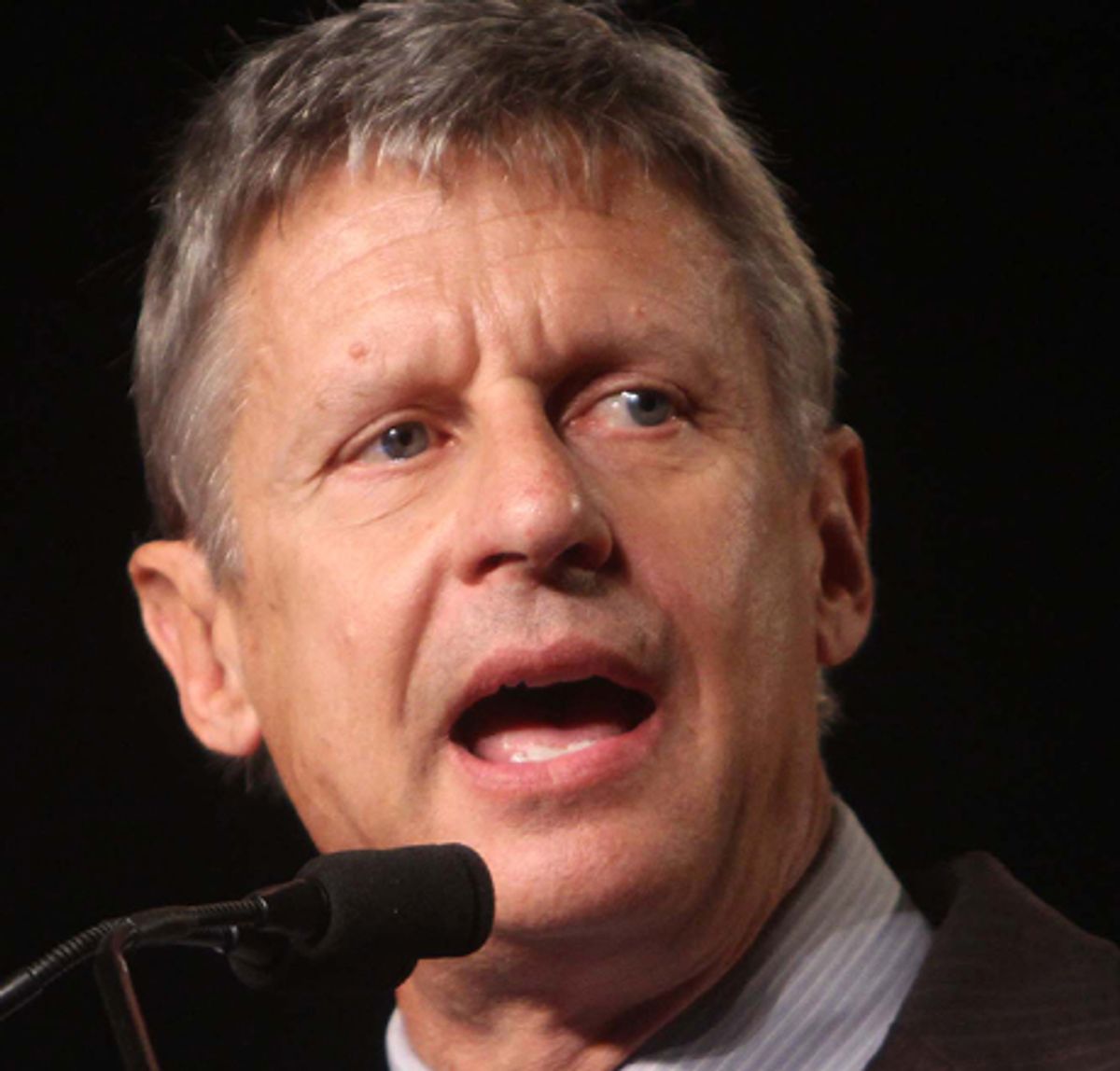 A recent survey found that Gary Johnson, the former New Mexico governor who was just nominated to be the Libertarian Party’s presidential candidate, does surprisingly well against Democratic candidate Hillary Clinton and Republican candidate Donald Trump. Although his 10 percent is nothing compared to Clinton’s 38 percent and Trump’s 35 percent, it’s enough to make his candidacy relevant to our national conversation.

This is where Johnson’s bold and unorthodox view on drug policy could alter the course of American history.

Johnson is perhaps best known for his unabashed support for marijuana legalization. Back in 2000, he became the highest ranking American political official to ever call for ending the prohibition against recreational cannabis use; later that same year, Hawaii Governor Benjamin J. Cayetano and Minnesota Governor Jesse Ventura joined him in calling for the federal government to decriminalize pot and treat drug abuse as a public health issue rather than a crime. In the years since, Johnson has remained boldly iconoclastic on these issues, admitting to The Weekly Standard that he smoked pot from 2005 to 2008 to recover from a paragliding injury and vowing during his 2012 presidential campaign that he would pardon marijuana offenders and “defang” the Drug Enforcement Administration (DEA).

There are good reasons for wanting to cut the DEA down to size. According to drugpolicy.org, America spends $51 billion annually (that’s billion with a ‘b’) in its so-called war on drugs, a program that exists for no other reason than to tell American citizens what they can and cannot do with their own bodies. Nearly 1.3 million people were arrested in 2014 alone merely for possessing contraband substances (83 percent of all drug arrests), more than 600,000 of whom were taken in for marijuana possession (88 percent of all marijuana-related arrests). All of this is occurring as America continues to house the world’s largest prison population, of whom a disproportionate number are African American or Latino (even though, when it comes to drug-related offenses, they are no more likely to use than whites). Not surprisingly, a 2015 Gallup Poll found that 58 percent of Americans support legalizing marijuana - the highest number in the survey’s history - with that number rising to 71 percent for 18-to-34 year olds.

Of course, Johnson isn’t simply saying that marijuana should be legalized; he is arguing that, unless a drug user poses a direct risk to others (for example, driving while under the influence), their actions shouldn’t be criminalized at all. The logic here is very similar to that employed in supporting gay marriage (which Johnson does) and a woman’s right to choose (which Johnson also does up to 24 weeks, although as a fiscal conservative he opposes government funding for organizations that perform abortions). While socially conservative Americans have every right to disapprove of recreational drug use, it is profoundly troubling that they are able to use our government to impose their personal moral beliefs on other people… especially considering that, as President Obama admitted last year, the war on drugs has been “very unproductive.”

While there is an inexorable logic of completely legalizing marijuana - Alaska, Washington, Oregon, Colorado, and Washington, D.C. have already done so — Clinton and Trump haven’t gone nearly as far as Johnson. Characteristically, Donald Trump has been deliberately vague about all matters related to drug policy; although he supports medical marijuana, his main criticism of the war on drugs is that “we do such a poor job of policing.” By contrast (and to her credit), Clinton has been much more specific,

By contrast (and to her credit), Clinton has been much more specific, advocating rescheduling marijuana from a Schedule I to a Schedule II substance (which would allow further research into its health benefits), supporting its use for medical purposes, condemning the wildly disproportionate racial disparities in drug-related arrests and sentencing, and vowing not to interfere with states that have legalized it entirely. That said, she doesn’t support outright legalization of marijuana, and although she supports sentencing reform for other drug-related offenses (in particular singling out the disparity between cocaine powder and crack cocaine), she still backs both the DEA and the underlying policy goals of the war on drugs - one that, notably, her husband’s administration did a great deal to worsen.

Fortunately for drug policy reformers, a viable Johnson candidacy could be a game-changer. Third-party candidates have a long history of supporting ideas that are ultimately picked up and implemented by one or both of the major parties: Two of the most famous examples include the Populist Party in 1892, which introduced American voters to the secret ballot, the direct election of US Senators, banking reform, and the graduated income tax, and the Progressive Party in 1912, which called for the prohibition of child labor, mandatory workplace safety laws, workers’ compensation, and many of the business regulations later implemented by the New Deal. Because the presidential candidates of those parties (General James B. Weaver and former President Theodore Roosevelt, respectively) outperformed most third-party candidacies, future Democratic and Republican candidates saw the practical as well as moral wisdom in adopting their more reasonable policy proposals.

Given that he has already cracked double-digits in early polls, Johnson is in an excellent position to play a comparable role in this election. After all, it isn’t like Clinton and Trump aren’t already in considerable trouble. Both of them have higher unfavorability ratings than any major party candidates since the dawn of modern polling, and each has alienated large swathes of their party’s bases in order to become their presumptive nominees. If Johnson continues to poll well and increases his mainstream media exposure, he could pose a simultaneous threat to Clinton from the left (he is more liberal than her on a number of social issues) and Trump on the right (he is more conservative than him on a number of economic issues). In order to stave Johnson off, both Clinton and Trump will need to peel off his voters by moving closer to his positions… and, as the surveys of public opinion make clear, drug policy is a shoo-in to be one of them.

This is why, although I’m not a libertarian myself, I can’t help but wish Johnson a fare-thee-well in his upcoming presidential bid. His statements about America’s war on drugs have been courageous and ahead-of-the-curve, and we would benefit enormously if they were enacted into public policy. The 2016 presidential election is already a historic one - from Clinton becoming the first major female candidate to Trump breaking the GOP establishment’s half-century lock on their party’s nomination process - but that doesn’t mean further history can’t be made here. If Johnson’s campaign is able to pressure our next president into doing the right thing about marijuana specifically, and our war on drugs in general, he will have cemented his place as one of America’s great champions of social justice and personal freedom.