Here's how you create a "political revolution": The progressive policies Sanders should be talking about

Bernie has driven Democrats leftward, but there's big issues he must tackle, from voting reform to worker ownership 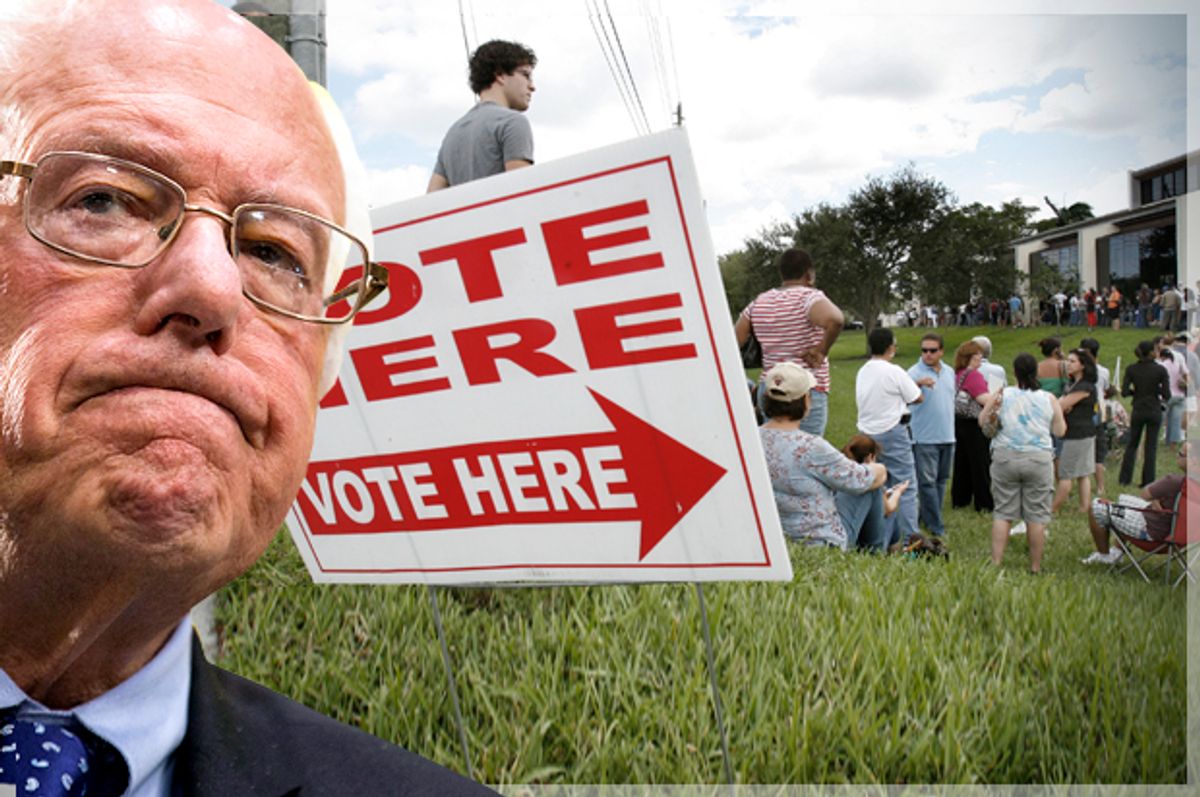 Over the past year, the insurgent campaign of Sen. Bernie Sanders has ensured that many important issues that the mainstream media might rather ignore have remained at the front and center of American politics. From the skyrocketing costs of healthcare and the stilltoo-big-to-fail banks to the historic levels of economic inequality and the corrupt campaign finance system; with Sanders in the race, these issues haven’t been brushed aside or minimized, as they would have been otherwise.

The Vermont senator has also introduced a comprehensive platform with many proposals that would help address these issues. Some of the most notable policies include “medicare for all” universal healthcare, reinstating Glass Steagall, overturning Citizens United and creating a public financed campaign system, making public college tuition free (paid for by a minuscule tax on financial speculation, which would also rein in on risky behavior), increasing the minimum wage (which is close to a historic low relative to U.S. average wage), guaranteeing paid family leave, fighting for racial justice (his platform on racial justice can be found here), breaking up too-big-to-fail financial institutions, and expanding Social Security by lifting the cap on the payroll tax.

These policies are in no way radical: most of them can already be found in industrialized countries around the world (in fact, some of them were found in America until recently). The reality is that Sanders, who is considered something of a radical in America, is closer to the center of the political spectrum when compared to other “left-leaning” parties in Europe (consider Jeremy Corbyn’s Labour Party, for example). Social democratic in nature, Bernie’s platform would promote progressive change that is desperately needed in the age of Trump and Clinton.

And while on the topic of progressive change, it is worth noting some other policies that Sanders could give a big boost to with his current popularity — policies that may not otherwise receive due consideration or any mainstream attention at all. With the recent formation of the Democratic party’s platform committee, which will help determine the party’s 2016 agenda, this is as good a time as any to push for bold progressive ideas.

Some worthy proposals include introducing an instant-voter runoff system for presidential and senatorial elections, replacing the current first-past-the-post (a.k.a. winner-takes all) voting system with a proportional representation model, encouraging worker-owned cooperatives, and promoting for a universal basic income (in addition to social insurance), a policy that may very well become more necessary as technology continues to eliminate decent paying jobs.

In an interview with Vox’s Ezra Klein last year, Sanders said that he is “absolutely sympathetic” to the idea of a universal basic income (UBI), which has been supported by both leftists and conservatives (though conservative plans would eliminate all other forms of social welfare).

“Here’s the point,” said the senator. “This is the wealthiest nation in the history of the world, but nobody in America knows it because their standard of living is going down and almost all of the new wealth is going to the top 1 percent... Everybody in this country should in fact have at least a minimum and dignified standard of living. All right?”

The concept of a UBI has been around for quite some time, and different versions have been promoted by those on the right and left, from Milton Friedman to Martin Luther King Jr. Some on the left have argued against a UBI because it isn’t means-tested (every citizen would receive it, regardless of income or wealth), but as Matt Bruenig points out in Demos, “a UBI and social insurance are not incompatible with one another. You can have both simultaneously, and you should have both simultaneously.”

A UBI would be a social insurance’s insurance, as Bruenig puts it, and if technology does continue to eliminate decent jobs (and, according to 2013 Oxford study, up to 47 percent of current American jobs could be computerized within the next two decades), a basic income may become inevitable. There are many debates to be had over the UBI — whether the income amount should change with age, for example, and how it would be financed — but the policy must first be introduced to the mainstream, which Sanders could certainly help happen.

One of the main drivers of economic inequality is the widely disproportionate concentration of capital. The ownership class, i.e. capitalists, have seen their wealth grow rapidly over the past several decades as middle-class jobs have shipped overseas and productivity has increased with new technologies, while ownerless wage-earners have seen their pay stagnate or decline (and therefore their wealth). In the late seventies, the top 0.1 percent owned around 7 percent of the county’s wealth; today, their share has just about tripled to 22 percent — which is about the same amount of wealth as the bottom 90 percent.

One way to help address this growing wealth inequality is to promote employee ownership and the democratization of the economy, which Sanders has been highly supportive of throughout his career. In 2014, the senator introduced two pieces of legislation that would help promote worker-owned companies, which have been shown to be more productive than regular companies and have lower employee turnover (the biggest and more notable worker cooperative is Spain’s Mondragon, which has about 80,000 employees and was founded in 1956).

Sander’s bills, co-sponsored with Sen. Patrick Leahy (D-Vt), would create and expand employee ownership centers throughout the country, which “provide training and technical support for programs promoting employee ownership and participation,” and create a “U.S. Employee Ownership Bank to provide loans to help workers purchase businesses through an employee stock ownership plan or a worker-owned cooperative.”

Though Sanders obviously believes in promoting employee ownership and worker co-ops, he has been somewhat less vocal about it during his presidential campaign. It is certainly worth promoting with his new-found prominence.

When it comes to electoral reform, Sanders has been the most vocal proponents of eliminating private money, creating a public finance system, reinforcing the Voting Rights Act, and establishing a national voting holiday. But as I noted above, there are other important reforms that Sanders could and should provide his voice to in the weeks leading up to the convention.

One of these is instant-runoff voting (IRV), which would help address the two-party duopoly and “lesser of two evils” phenomenon that has become such a hotly debated topic in 2016. IRV allows voters to rank their presidential (or Senate) candidates in order of preference, so that if their first choice receives the lowest amount of votes, their vote will automatically go to their second choice instead of helping a candidate they vehemently oppose, thus eliminating the “spoiler effect.” If, for example, Sanders ran as an independent in 2016, Sanders supporters could vote for him without losing sleep over helping Trump by listing Clinton as their next option. Sanders has previously expressed support of IRV, which is not surprising, considering it would help Independent-minded politicians like himself.

Finally, replacing the current winner-takes-all congressional elections with a form of proportional representation would create a congress that better represents the population, while virtually eliminating gerrymandering. In 2014, Republicans won only 52 percent of the vote, yet they received 57 percent of seats in the House; two years earlier, Democrats won the most votes, but Republicans won the most seats. Proportional representation would fix this undemocratic outcome, as FairVote’s executive director Rob Richie explains in The Nation:

Sanders has done wonders for progressivism in America, and he is now the most well-known leftist in the country. His vocal support of these and other bold polices would go a long way towards creating the “political revolution” he has been calling for since last year.