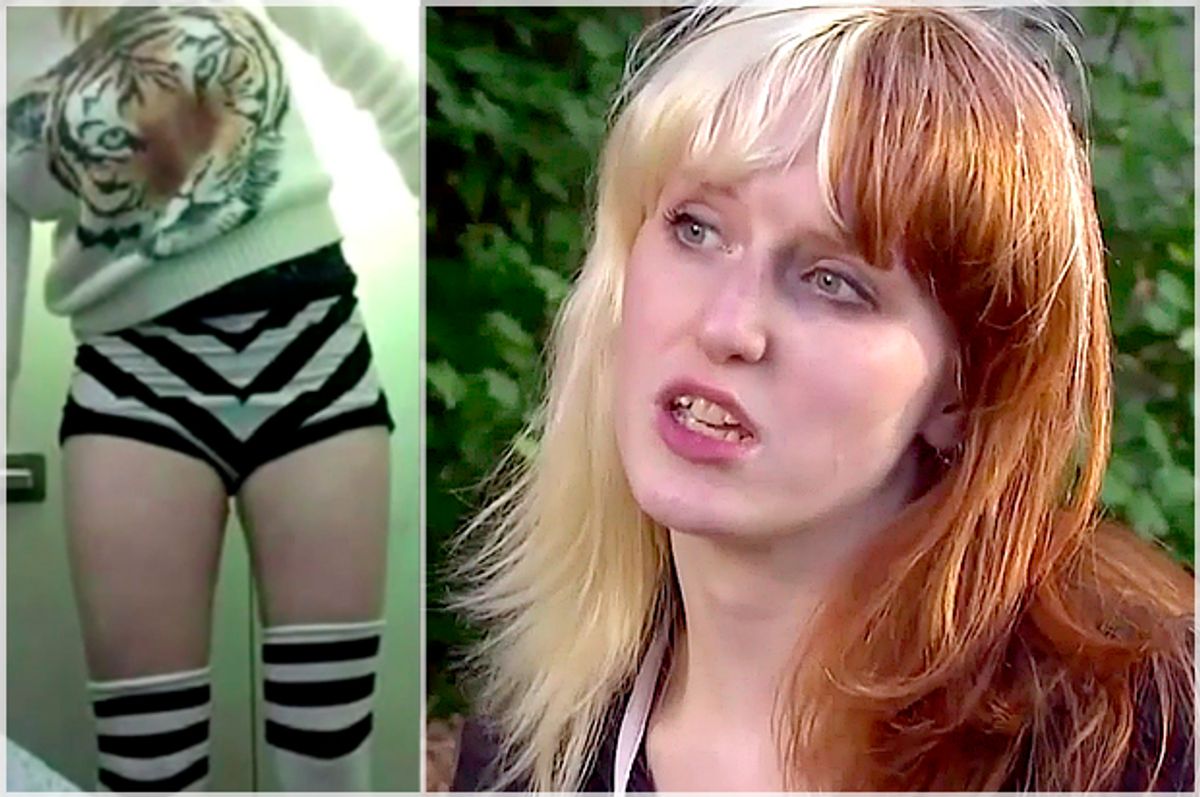 On May 18, the 26-year-old Seattle burlesque performer who goes by the name Maggie McMuffin was flying from New York to Seattle on JetBlue, on connecting flights, one from New York to Boston, the other from Boston to Seattle. On her first flight of the day, “absolutely nothing” happened, McMuffin told Salon in an interview. But while she was waiting at the gate at Logan International Airport in Boston to board her flight to Seattle, she was told that her black and white shorts were too short for their liking. McMuffin says a gate agent demanded, “You’re going to have to cover up in order to get on the flight.” McMuffin’s offer to tie a sweater around her waist or use a blanket were rebuffed, she said. Asked how she felt in that moment, McMuffin said, “I felt angry. I felt disrespected. I felt disappointed in the company.”

JetBlue spokesperson Morgan Johnston disputed this account in an email to Salon, writing, “The gate and onboard crew discussed the customer’s clothing and determined that the burlesque shorts may offend other families on the flight. While the customer was not denied boarding, the crewmembers politely asked if she could change. The customer agreed and continued on the flight without interruption. We support our crewmembers’ discretion to make these difficult decisions, and we decided to reimburse the customer for the cost of the new shorts and offered a credit for future flight as a good will gesture.”

However, McMuffin paints a very different picture. As she explained, “I don’t know why they’re saying they didn’t deny me boarding; it was pretty clear that they wouldn’t let me on the plane unless I went and did something.” She also wants to make it clear that “JetBlue didn’t know I was a burlesque dancer when this went down.” Of her now infamous attire, she says “they’re not burlesque shorts; they’re just shorts.”

What JetBlue did isn’t apparently illegal; Transportation Department spokesman Bill Mosely, told The New York Times in 2011, “An airline can refuse to carry a passenger for any reason, so long as it is not discriminatory.” (Forbes has more on the legal issues involved.) But that doesn’t mean it was anywhere near the right way to handle their concerns.

All this begs the question: Why did JetBlue deem themselves fit to tell her she had to change, especially since, according to McMuffin, no customers were complaining? I get that they may have the legal right to do so, but to essentially refuse a paying customer because they’re rushing to judgment about her outfit, the kind that you are likely to see someone wearing walking down a street across America on a warm summer day? I can’t wrap my head around that.

I fly at least once a month—usually on JetBlue, in fact—and the truth is, most passengers really don’t care about their fellow seatmates, save for crying babies, fat people and supposed (aka, racist) terrorist threats. But air travel is not a fashion show, and I highly doubt anyone flying with McMuffin would have been so outraged that it would affect their loyalty to the airline. And even if they were, why should she be the one to have to kowtow to the judgments of strangers when she’s a paying customer too?

By pre-emptively deciding to play clothing morality police, JetBlue actually did a disservice, not a service, to their customers. Who’s to say next time I show up on a flight my cleavage won’t be deemed somehow “offensive?” Remember when Southwest passenger Kyla Ebbert was told her skirt was too short back in 2007? Have we learned nothing since then?

This all went down just as her flight was starting to board. McMuffin did wind up buying a pair of $22 shorts and got back in time to take the flight without incident. She began Tweeting about what happened while in the air, and says JetBlue responded via DM, but she was told the decision was at the pilot’s discretion.

Asked what the airline could have done differently, McMuffin said, “The pilot could have spoken to me directly; it could have been more clear why this was a problem. I was just told I was inappropriate, that this is a family company and ‘you need to cover up.’ It was very confusing since I had flown JetBlue in that outfit earlier that day.” McMuffin wound up accepting reimbursement for the shorts, but chose not to accept the credit toward a future flight.

Jo Weldon, headmistress of the New York School of Burlesque and author of "The Burlesque Handbook," said in an interview she was glad JetBlue apologized, but they certainly shouldn’t have leapt into monitoring their passengers’ apparel like this in the first place. “I think ‘appropriate’ in this case sounds like an excuse for the flight crew's discomfort with a woman who is comfortable enough in her body to wear revealing clothes. Were other passengers complaining? It doesn't make sense. When I think of offensive clothing, I think of things like cultural appropriation and t-shirts with homophobic or racist slogans on them. Maggie is an entertainer and her outfit reflected her playful personality more than anything else. Yesterday I was in the airport with my partner Jonny and he commented that her shorts, ‘indecent for plane, were okay to broadcast on TVs at the airport.’” Once again, her shorts are nothing you won’t see at the mall or Starbucks or pretty much anywhere else, so why should plane passengers be treated as extra delicate?

Dallas-based burlesque performer and producer Vivienne Vermuth was also outraged, calling this an example of rape culture. “The only reason this is news is because our country is fascinated with women's bodies and sexualizing them at any given time,” said Vermuth in an interview with Salon. “The fact that maybe a foot and a half of her thigh was visible of course means that we all need to completely freak out and make sure that she is covered. God forbid you see any of her legs and that turn on any man and caused him to go into a complete sexual frenzy in a giant metal tube ten thousand feet above the Earth.”

What absolutely doesn’t make any kind of sense is that McMuffin was allowed to fly from New York to Boston on JetBlue without an issue but the same airline, based on the whims of a new pilot and crew, suddenly found her outfit too scandalous for the precious eyes of her next round of seatmates. How is anyone supposed to follow that logic? If that doesn’t scream double standard, I don’t know what does. As McMuffin put it, “I think if JetBlue is going to have policies like this, they have to be clear, straightforward policies; they can’t be subjective on the part of employees.”

McMuffin was also offended by the invocation of families as the cause for asking her to change her outfit. “I have issues whenever people make the argument, ‘there are families on board.’ I’m part of a family. A lot of people online have contacted me saying, ‘As someone with kids…’ Well, I am someone’s child as well. Whenever people start looking at women who dress in a way that they view as provocative, or ‘like a slut who’s looking for attention,’ as I’ve been called online, they automatically orphan that person and remove them from any conversation involving family units.”

Exactly. JetBlue was invoking what they thought their customers would want, rather than responding in any way to the actual concerns of the passengers about to join McMuffin, who most likely just wanted to take their seats and get home. (For the record, even if someone had complained, JetBlue could have offered her a blanket, allowed her to use a sweater to cover her legs, or come up with a solution that didn’t involve humiliating her and forcing her to spend additional money.)

Adding insult to injury, McMuffin has faced harassment online in the wake of her story getting picked up first by local, then national media. Of the comments she’s received, McMuffin believes they’re “indicative of a lot of people still clinging to the idea that somehow women’s bodies are the most dangerous thing in the world and they’re going to bring about the eventual downfall and ruin of man.”

Since it’s likely that people traveling in the summertime will be, like McMuffin, wearing seasonally appropriate attire, I can only hope that JetBlue (and any other airlines with similarly capricious policies) wakes up and realizes that they should be in the business of getting passengers from one place to another, not telling them how to dress.