New life for the labor movement: The Verizon deal is a huge victory for all workers

The labor movement has suffered a lot of blows lately: Here's why the Verizon contract is a great leap forward 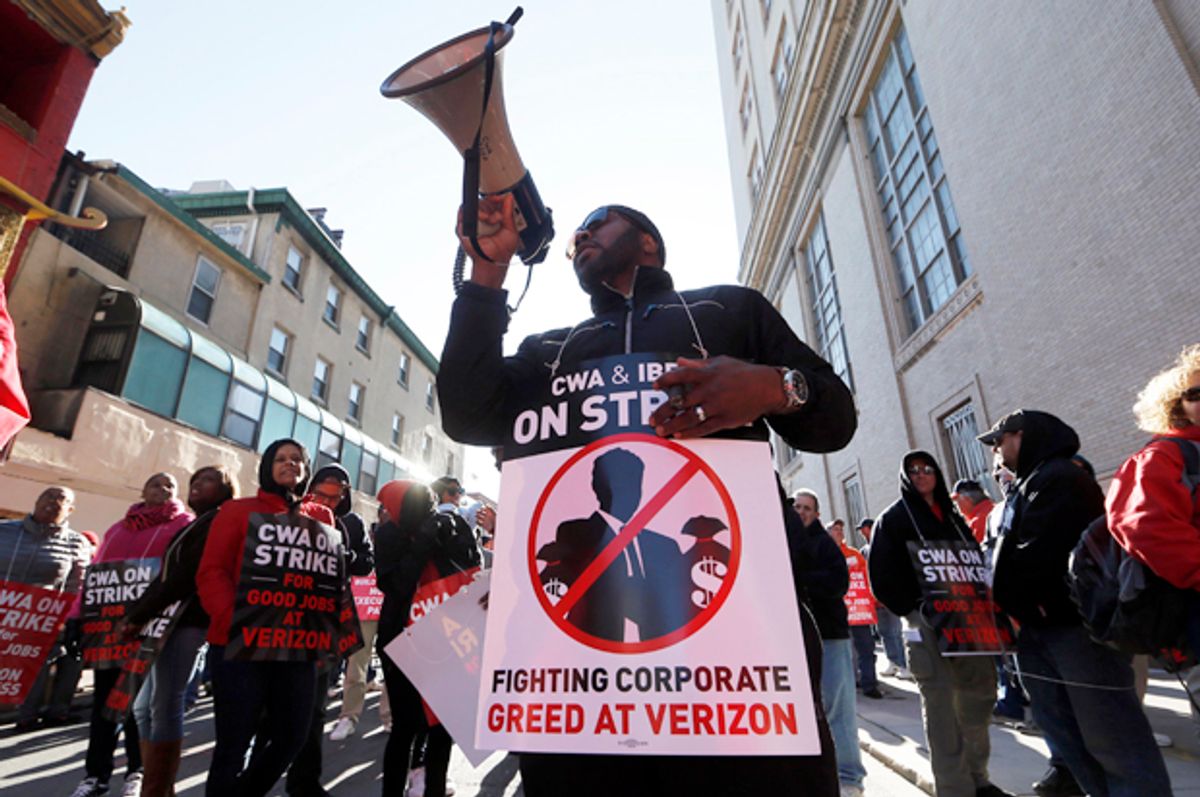 Almost 40,000 striking Verizon employees go back to work on Wednesday, after contract negotiations assisted by the U.S. Labor Department yielded a breakthrough, ending the largest walkout in America in half a decade. The Communications Workers of America, one of two unions that walked out, has touted the deal as a victory for labor. And while unions frequently hype their success, in one key area they’re right – and it could have huge repercussions for the labor movement’s foray into the fastest-growing sector of the workforce.

One would expect trade-offs out of any labor negotiation, but CWA and the International Brotherhood of Electrical Workers appear to have gotten a good deal. That’s perhaps because of shares falling at Verizon during the six-week strike, and analysts slashing revenue estimates. Even CEO Lowell McAdam admitted that installations and new orders dropped significantly. I guess it’s hard to get work done without trained workers.

The major points of contention between labor and management incorporated big themes of the economy – things like outsourcing, monopolization, and automation. But the biggest issue was that Verizon had two businesses: a “wireline” business of installing and managing phone and fiber-optic cable, and a wireless business that mainly involved selling cell phones in retail stores and maintaining the wireless network. The wireline business is unionized; the wireless business mostly isn’t.

So it’s no surprise that Verizon invested more heavily in the area of its business with lower labor costs. Even though Verizon’s bundled FiOS service for phone, cable TV, and Internet is revered by those who can access it, they’ve rolled it out in a limited fashion, because they’d have to pay union workers to do it.

Verizon also wanted to consolidate call centers, part of the wireline business, and route more calls overseas to facilitate outsourcing to places like Mexico, the Philippines, and the Dominican Republic. They wanted to automate more customer service jobs as well.

CWA appeared to win that round. They secured a commitment to add 1,300 call center jobs over the next four years to accommodate demand. Since over the previous four years, 5,000 customer service jobs got outsourced from the United States, this is an even bigger win than it sounds like. Under the new contract, a certain percentage of customer service calls must be answered by a unionized worker inside the Verizon footprint. The company can more efficiently route calls because the footprint gets spread across the whole network rather than state-by-state, but the jobs are more protected.

Elsewhere, workers will receive a raise of 10.9 percent over four years, and will not see their pensions cut. Verizon wanted the ability to relocate workers for long-term assignments inside its coverage area, but the unions rejected that. The union retained sickness and disability rules without restrictions. There are signing bonuses for new workers. Verizon did secure health care concessions that could lead to hundreds of millions in savings, but the unions already expressed a willingness to allow those changes before the strike.

The real news in the contract is that the segregation between union wireline workers and non-union wireless employees has been breached. Six Verizon Wireless retail stores in Brooklyn and one in Everett, Massachusetts will be brought under the contract. Sixty-five workers in these stores, along with 100 wireless technicians, will be affected.

At first glance, 165 workers doesn’t seem worth mentioning. But it’s the first time ever that Verizon Wireless stores have been organized. There are over 1,700 Verizon Wireless retail sites, and if you include authorized retailers you get to over 7,000. There’s simply no difference between the 7 unionized stores and the 1,700-odd non-union ones. This crack in the dam will lead to many thousands of workers joining the union.

CWA already represents AT&T Mobility employees, some of them in retail. But signing up the other major wireless provider to the beginnings of a retail contract will put pressure on the rest of the industry. And as the U.S. establishes itself as a service-oriented economy, lifting up those workers with decent wages and real benefits is going to be crucial. It’s the same impulse motivating the Fight for 15, and it accomplishes one of their signature goals – joining a union.

The retail sector is getting more militant about good jobs. Almost 5,000 Macy’s workers in New York City may strike within the next two weeks. The United Food and Commercial Workers have a retail, wholesale and department store division. And SEIU is funding the successful Fight for 15 efforts.

The more service-sector workers that get brought into the fold of a union contract, the greater the feeling of solidarity, with more workers understanding that they can fare better if organized. That crosses over from wireless stores to the entire sector. Unionization in retail trade is extremely low, around 5 percent. Seven Verizon stores won’t move the needle, but thousands might.

Moreover, this puts wireless employees at Verizon under a union contract, and if that expands over time, the calculation by management to expand the parts of their business with the lowest labor costs no longer applies. That could mean a boost for FiOS, which is good for workers and customers, since it’s a popular service.

I don’t remember wireless workers ever being a major part of the discussion in the Verizon strike. Wireless workers were trying to organize on their own through CWA. This represents the union lifting up workers outside its immediate membership, something that will hopefully be emulated. The labor movement has suffered a lot of blows lately: a victory of this type that can be built on in the future is sorely needed.