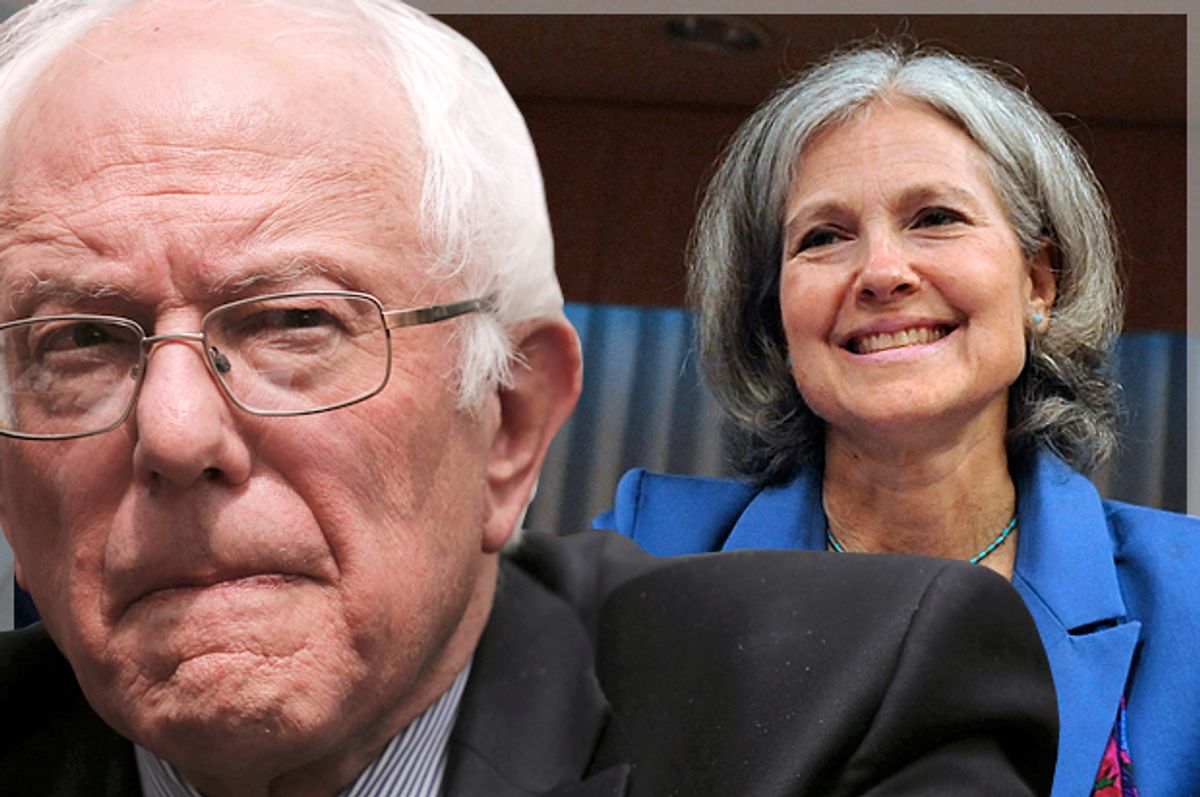 The election may be about to take another unpredicted turn that could result in the election of President Sanders, completing his 2016 political revolution.

Before a rally in Santa Monica, Senator Bernie Sanders was asked by KABC-TV 7 News political reporter Elex Michaelson about the offer by Jill Stein, the Green Party’s presumptive presidential nominee, for him to run with the Green Party. Sanders response left open the door to running as a Green. He could have easily rejected the offer of a Sanders-Stein ticket, instead he said: “Right now, our goal is to win the Democratic nomination.”

Sanders should continue focusing on the Democratic Party nomination. He has run a far more effective challenge to the Democratic Party establishment than any insurgent candidate in decades. In addition, every poll shows Sanders would easily defeat Donald Trump while Trump and Clinton are virtually tied and Trump is leading in two out of five of the most recent polls.

Sanders is also right to keep open the possibility of a Green Party run. Dr. Jill Stein opened the door to Sanders on April 22 when she wrote him about how they could work together to advance his political revolution. This was not the first timeshe sought to open a dialogue with Sanders on how they could work together. On Acronym TV, Stein told Dennis Trainor, Jr. that everything would be on the table, including her running as the vice presidential nominee and Sanders running as the presidential nominee.

Sanders leaving the door open to a Sanders-Stein ticket comes at a time when polls show unprecedented support for a candidate to challenge Donald Trump and Hillary Clinton. This week NBC found that 47% of voters would consider a third-party candidate if Clinton and Trump were the major-party nominees. In the last week, two other polls found a large minority will vote for a third party this year. Schoen Consulting found 20% of voters would vote for a third party against Clinton and Trump with 14% undecided; Data Targeting Inc. found 21% would do so with 14% undecided.

The Best Way for Bernie to Stop Trump

Sanders has promised to do all he can to stop Trump from becoming president. He does not want to help Trump get elected.

The best way for Sanders to prevent Donald Trump from becoming president is to run with Jill Stein in the Green Party.

The key to stopping Trump is to keep him from expanding his base of support. His support now is primarily Republican, white males. He needs to expand that base of support but if Sanders is in the race, every direction he tries to go will be blocked.

The 2016 election is unique. The group that will decide the outcome are independent voters, which makes up a large plurality, maybe a majority, of voters. This is the largest number of independent voters in the electorate ever. Why?  People have lost faith in the Democratic and Republican parties. For the first time ever, Gallup reports that neither major party has 40% favorability, and both parties have over 50% unfavorable ratings. Gallup also reports that 60 percent believe a third party is needed “because the Republican and Democratic parties ‘do such a poor job’ of representing the American people.”

Voters support Trump because he is seen as an outsider, challenging the system. But if Sanders runs independent of the two parties, he will be the real outsider who is challenging the system since. He has always been an independent until this primary now most voters are as well. Both parties will be raising money from big business interests and will be seen for what they are – the same old money-dominated, not people-dominated, campaigns. Sanders has shown with millions of contributions that he answers to the people, not to big business. Sanders has been the strongest in the primaries with independents.

Clinton, with her close Wall Street relationships, has left an opening for Trump to move to the left of Clinton on Wall Street and trade. Large big business donations to the Clinton Foundation, millions of dollars in speaking fees, and her funding from Wall Street are political weaknesses.  Trump can attack this perception of corruption and move to her left, but with Sanders in the race those votes will not go to Trump but to Sanders. He has made reining in Wall Street the centerpiece of his campaign. There is little room for Trump to capture anti-Wall Street votes with Sanders in the race.

Another issue where Sanders blocks Trump from taking voters from Clinton is corporate trade agreements. Clinton has generally—even enthusiastically—supported these agreements. Sanders has been a leader in opposing trade rigged for trans-national corporations. He has consistently worked to stop the Obama trade agenda of corporate giveaways. Sanders would block Trump again.

Hillary Clinton has a terrible record on war and militarism: supporting the Iraq War, the destruction of Libya, and a no fly zone over Syria. She has been belligerent with Russia and China, as well as blindly supportive of Israel and always putting war with Iran on the table. Trump has been inconsistent on militarism but leans toward non-intervention, while building up an even bigger military, and wants to make a deal with Russia and China rather than create conflict. Sanders, while not as consistently anti-militarist as we would like, opposed the Iraq War, the military attack on Libya, and a no-fly zone over Syria. Unlike both Trump and Clinton, he did not speak at the right-wing pro-Israel conference, AIPAC, and gave a speech favoring Palestinian human rights. Sanders running would make it difficult for Trump to take advantage of Clinton’s militarist vulnerability.

Some suggest that Trump is bringing up the 1990s Clinton scandals in an effort to pull millennials and Bernie supporters from voting Clinton. This is the first time many youths have heard these. There are signs Bernie supporters might support Trump. But, once again, with Sanders in the race the youth vote will go to him. Millennials are the most diversity-minded generation on record and oppose Trump’s racism, sexism, and xenophobia. Sanders advocates on their behalf like free college education and, with Jill Stein as his vice president he would be even stronger because she confronts the high debt suffered by many recent college grads. A Trump-Stein ticket will block support for Trump from US youth.

Sanders would also block Trump’s false efforts to be the candidate of the worker because Bernie has always fought for worker rights.

Sanders in the race contains Trump and prevents him from expanding his base.

The Overblown Risks of an Independent-Party Campaign

It is a rarity in history for a third party to change the outcome of an election. This is a greatly exaggerated fear. Even in 2000 when Nader is blamed for the election of George W. Bush, with an assist from Justice Scalia, the facts show that is a myth. Bush won 12 times more Democratic voters than Nader in Florida. Bush won 308,000 Democratic votes, while Nader won 24,000. Bush even won votes of 191,000 self-defined liberals in Florida compared to less than 34,000 for Nader. The facts show Gore ‘lost’ the 2000 election with a poor campaign failing to even win his home state.

The other fear is that none of the three candidates would get 270 Electoral College votes. But, there have been many third-party races, and the last time no one got enough electors was in 1877, and before that 1824. In 1992, the last time there was a third party in double digits, Bill Clinton won 40 percent in a three-way race and got over 270 electoral votes.

One thing that Sanders-Stein could do to minimize that risk would be for them to do what George Wallace did in 1968 and enter into a contract with their electors that ensured they could decide how their electors voted. When Wallace did that in 1968, the race was very close, so two days before the election Wallace and Nixon were negotiating for Wallace’s electors. But in the end, Nixon won enough votes that he did not need them.

Finally, there is one considerable risk of not having Sanders continue in the race (assuming Clinton is the Democratic Party nominee) that bears mentioning. An internal audit by the State Department inspector general has chided Clinton for knowingly breaking department rules in conducting sensitive State Department business via e-mails on an insecure, easily hackable private server. A highly-respected group of veteran intelligence professional has written President Obama, stressing that she probably committed felony crimes by doing so. No one can easily predict whether Obama will take the advice of those intelligence professionals before the nomination, but what is clear is that if he does not, Trump (who has stated he’d much rather face Clinton than Sanders) will have a field day calling Clinton a felon. Andcondemning Obama and Democrats for not only shielding, but even nominating, a felon. At that point, only Bernie Sanders staying in the race as a Green has any prospect of defeating Trump.

In a very savvy move Sanders responded to Clinton’s refusal to debate before the California primary, despite promising to do so, by agreeing to a pre-primary debate with Donald Trump. Given mainstream media’s endless appetite for all things Trump—and the fascination of two highly contrasting populist candidates—this could be by far the most watched debate of the primary season, if Trump does not chicken out. Democrats are angry because Hillary Clinton will be the loser of the debate. Clinton risks her already sagging support from Trump’s no-holds-barred, below-the-belt treatment.  Only Sanders will keep the high road and emerge from the predictable mud-slinging with his reputation intact.

Sanders can campaign against Trump but only staying in the race as a Green (assuming he is not Democrat’s nominee) can stave off the demagogic menace known as Donald Trump by blocking his paths to a larger bloc of voters. Thankfully, he is kept that door open.

Kevin Zeese has worked on multiple Green and independent campaigns, including as spokesman for Ralph Nader in 2004. Zeese is co-director of Popular Resistance, which grew out of the Occupy movement. This article represents his personal views.

Patrick Walker, a veteran anti-fracking and Occupy, is co-founder of Revolt Against Plutocracy and co-creator of the Bernie or Bust pledge, which spawned the nationwide Bernie or Bust movement. This article represents his personal views.