From Alex Haley's book to a culture-shaping miniseries, and now an action-adventure remake. How much of it is true? 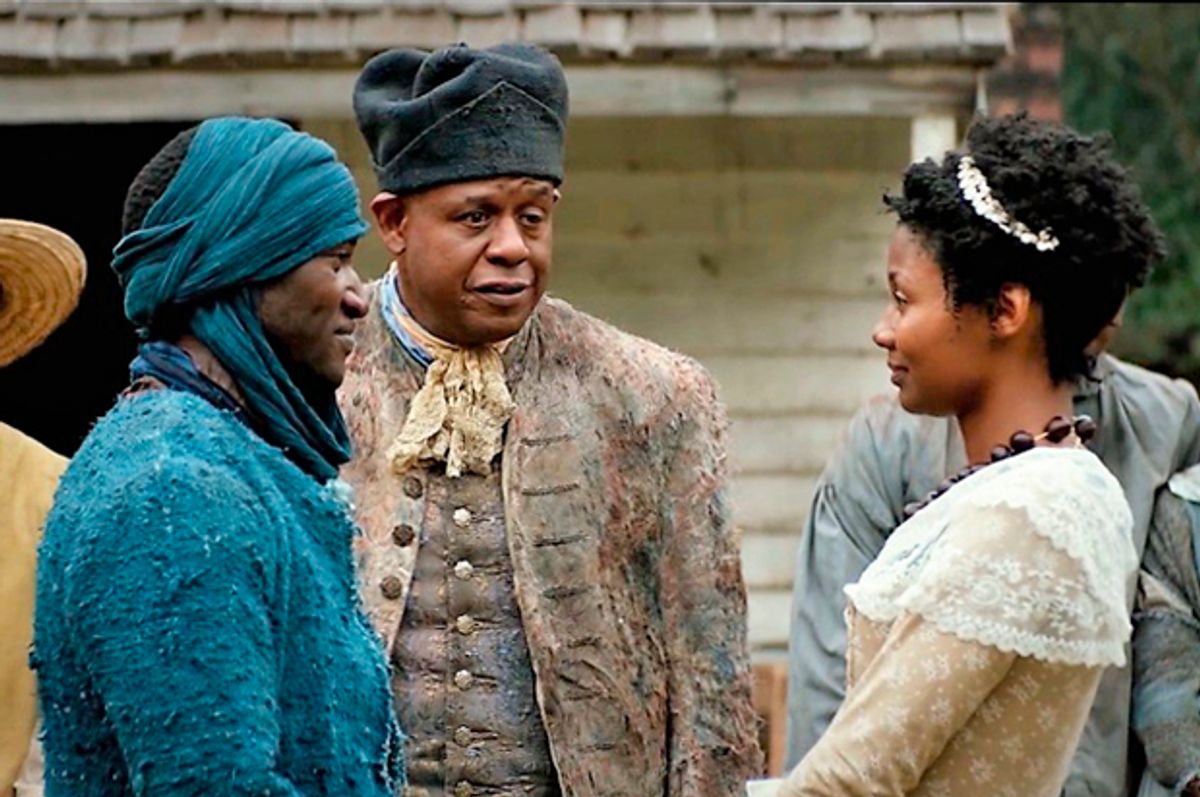 “Roots,” in its various forms, is largely a work of imagination rather than history. It wasn’t presented that way at first, which has led to no end of grief and confusion over the years, but at this point that’s hardly an indictment. Four decades after the publication of Alex Haley’s Pulitzer-winning book and the production of an NBC miniseries that reshaped America’s consciousness, it’s definitely not a secret. The important questions, I would say, are about what kind of imaginative work “Roots” is and was, and what image we see reflected when we gaze into it. What did we learn from “Roots” in the 1970s, and what can we learn from it now, as a buffed-up action-adventure remake whose final chapter airs Thursday on the History Channel?

On the principle that historical fiction always tells us more about the present than about the past, we can conclude that Haley’s 1976 book pursuing his ancestry all the way back through the age of slavery and into Africa, and then the 1977 miniseries that was seen by more than half the United States population, described a moment when many Americans were ready to begin reckoning with the darkest areas of our national story. THC’s new “Roots” features many admirable performances, and has more thematic complexity and much higher production values than the stodgy, stagey LeVar Burton original. But it cannot possibly have the cultural impact of the first series. Among other things, it’s curious for someone of my generation to encounter “Roots” as a work obviously shaped by Quentin Tarantino’s “Django Unchained” and Steve McQueen’s “12 Years a Slave,” when the true cultural flow is the other way around.

Setting aside the question of whether Haley’s account of tracing his family history back to a single African ancestor was factually accurate (which it almost certainly wasn’t), “Roots” did what fiction can often do more effectively than history: It dug for deeper levels of truth by other means. If Haley’s book was an unstable blend of myth, history and invention, two revolutionary truths lay at its core that forever changed Americans’ perceptions of the slavery era. Whether or not the intrepid Mandinka warrior Kunta Kinte ever existed, his story made the point that every African abducted into slavery had been an individual person with a home, a family and a subjective life experience, not just a unit within an undifferentiated mass of black suffering. After that came one of the most obvious and most deliberately ignored facts of American life: African-Americans and European-Americans were genetically intertwined, and in many cases closely related, largely because of the widespread rape of black women by the white men who owned them.

Those things were already well understood by historians and other scholars by 1977, and perhaps by anyone who’d ever struggled through a William Faulkner novel. It was no mystery, within the black community, why many African-Americans have lighter complexions than are typically found in West Africa. But for mainstream American society, in a decade when the population was about 80 percent white, these specific truths about the immense historical crime of slavery remained explosive. Even if you understood, as a white person, that the portrayals of slavery in “Gone With the Wind” and “Birth of a Nation” and other, less overtly offensive works were racist hogwash, it was possible to perceive slavery as an unfortunate historical anomaly that existed long ago and involved people long dead. Mistakes were made! But then Lincoln gave the Gettysburg Address and it was all better, right?

What “Roots” introduced into popular culture was the unavoidable fact that slavery is not some distant abstraction but a current that runs all the way through American history, whose effects are literally visible to this day. It was not just a misguided social institution or an outmoded economic practice but a crime of violence perpetrated over many decades on the bodies and lives of real people, not categorically distinct from the people who sat mesmerized on their couches in 1977. Most of the viewing audience for the first “Roots” was white (simply going by the numbers), and I think it’s fair to say that the reaction to the miniseries exposed a gulf in racial perception within the white population that already existed, and has since become a permanent factor in America’s political and cultural divisions.

Educated white liberals in metropolitan areas embraced Haley’s book and the subsequent NBC miniseries in large numbers, and perhaps with too much sentimentality and not enough critical distance. Haley was definitely not blameless for the way “Roots” was packaged and presented, and for the ensuing controversy. He knew perfectly well that some elements of his story were not accurate or at least not supported by evidence. There may have been an African named Kunta Kinte who was taken from Gambia, for instance, and there definitely was an American slave called Toby owned by the Waller family of Virginia. But they are almost certainly not the same person. Haley’s account of Kunta's idyllic life on the Gambia River is largely inconsistent with the known history of that place and time; his account of Kunta and his descendants between the American Revolution and the Civil War was guesswork at best, and much of it has subsequently been proven false.

In fairness, Haley originally intended to present his book as “faction,” a blend of historical research, oral tradition and invention. But his publisher classified it as nonfiction and so did the New York Times, where “Roots” sat atop the best-seller list for many weeks. So Haley found himself in a categorical trap and then continued to defend the indefensible, even as his problems multiplied. He ultimately had to admit that numerous passages in “Roots” had been plagiarized (inadvertently, he insisted) from a 1967 novel called "The African," by anthropologist Harold Courlander. When two professional genealogists dug through his story, they not only debunked much of the material in “Roots” but identified other enslaved people who fit the anecdotes handed down within Haley’s family better than the characters in his book did.

Another cadre of white folks, meanwhile, rebelled against “Roots” and seized upon its inaccuracies as a way of rejecting its message entirely. Ronald Reagan, who had run for president in 1976 and was preparing to do so again in 1980, called the TV series “anti-white” propaganda meant to stir up unrest in the inner cities. That was an early iteration, although surely not the first one, of a right-wing cultural mantra you could hear today in any given hour on Fox News, applied to Beyoncé or Black Lives Matter or Barack Obama or whatever else. (Or to the new “Roots,” surely.) Needless to say, there is no conceivable logic to arguing that if Haley invented certain details about the lives of his ancestors, that invalidates his portrayal of the lived reality of slavery, or proves that he was out to defame white people and make them look like vicious historical villains. But almost nothing about the dynamic of race and culture in American society is dictated by logic.

I have issues with the History Channel “Roots,” which has entirely different flaws from the original. Those are almost entirely about storytelling, not about history. As Adam Serwer puts it in a useful Buzzfeed article, the new “Roots” suffers from the “Django problem,” meaning the desire to frame the endurance and survival of enslaved African-Americans largely in terms of violent resistance. That’s understandable on many levels, since too much of American history and pop culture depicted slaves as noble but docile, suffering in silence and singing hymns. Slave rebellions and other overt acts of resistance were not infrequent, and a great deal of the inhuman brutality practiced by slave-owners was driven by terror and shame. But the frenetic rhythm of this new “Roots” feels overly calculated, especially in the opening two chapters; contemporary viewers will lose interest in Kunta Kinte (played by the charismatic young British actor Malachi Kirby), apparently, unless he’s presented as an indomitable action hero, a Mandinka Jason Bourne who never shows weakness and never gives in.

Many people caught up in the original “Roots” moment, black or white or otherwise, yearned to believe that Alex Haley had done something that no African-American (at the time) had apparently ever done: He had confirmed the validity of his family’s cherished oral history, handed down across seven generations, with objective evidence, and he had identified a specific individual ancestor who was born in Africa and abducted into slavery. It was an immensely alluring and even romantic notion — the prospect that the past can still be recovered, even by a people who have suffered a traumatic dislocation unlike anything else in modern history. In fact, Haley had only recovered that past in mythic or poetic form, and then obfuscated that for too long. It was important to be clear about that, but I’m not sure it even matters anymore.

“Roots” sparked a new understanding of slavery and, paradoxically enough, a new conflict over slavery. The current “Roots” has more to do that that contemporary ideological conflict, I would say, than with Haley’s book. “Roots” sparked a new interest in genealogy that extended well beyond black people, and that has only accelerated in the age of the internet. In the decades since, many African-Americans have traced their ancestry back into the age of slavery, and even to Africa, with a much higher degree of confidence than Haley could. If the new “Roots” is an ambivalent morality tale, pitched to a new era of black activism and identity politics, the original “Roots” was less artfully wrought but much bigger. It was a work of fiction disguised as fact, and that fiction contained shattering truths that blew open some of America’s biggest lies.