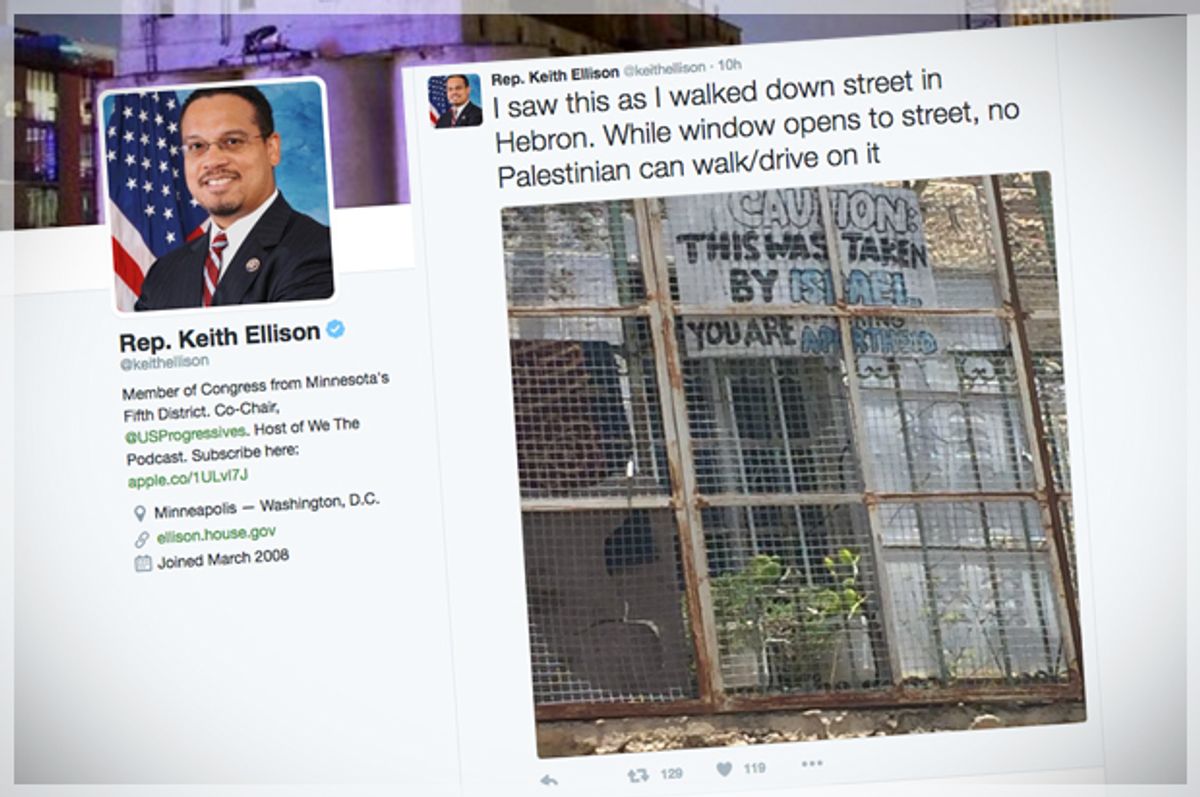 Rep. Keith Ellison shared a photo on Twitter on Thursday that refers to Israel's illegal military occupation of the Palestinian territories as apartheid.

Ellison, a Democratic congressman representing Minnesota, said he took the photo as he walked down a segregated street in Hebron, a city in the occupied West Bank.

It shows a sign reading: "Caution: This was taken by Israel. You are entering apartheid."

Israeli settlers live in the middle of Hebron, and armed Israeli soldiers stand at military checkpoints to ensure Palestinians don't go down streets that are exclusively reserved for the Israelis.

Ellison noted that, while Palestinians living under Israeli military occupation in Hebron may have windows in their homes that open to segregated streets, they cannot walk or drive down them.

In Hebron's Old City, Israeli settlers often throw rocks, glass, garbage, sewage and dirty diapers from their windows onto Palestinians below them. In response, Arab residents have hung up nets to walk under for safety. This, however, does not stop liquids such as urine from raining down on Palestinians.

Ellison, who co-chairs the Congressional Progressive Caucus, has been an outspoken supporter of Palestinian rights for years. He is also the first Muslim to be elected to the U.S. Congress, as well as the first black American elected to the House from Minnesota.

In May, Bernie Sanders chose Rep. Ellison to sit on the Democratic Party's platform drafting committee. Ellison joined two other figures, scholar Cornel West and advocate James Zogby, who have criticized Israel's oppression of the Palestinians.

Israel has illegally military occupied the Palestinian territories since 1967, in flagrant contravention of international law and numerous U.N. resolutions.

For decades, Israeli settlers have slowly colonized the occupied West Bank, in violation of the Fourth Geneva Convention.

Today, more than 600,000 Israeli settlers live in the occupied West Bank, including occupied East Jerusalem, and that number grows every year as illegal settlements continue to expand.

Israel's supporters have long opposed the use of the term apartheid. Yet, as Salon has reported before, veteran South African anti-apartheid activists have argued it is more than appropriate.

Desmond Tutu, the renowned anti-apartheid leader and South African bishop, has explained, "I have witnessed the racially segregated roads and housing in the Holy Land that reminded me so much of the conditions we experienced in South Africa under apartheid."

“I have witnessed the systemic humiliation of Palestinian men, women and children by members of the Israeli security forces. Their humiliation is familiar to all black South Africans who were corralled and harassed and insulted and assaulted by the security forces of the apartheid government," Tutu said.

Veteran Jewish South African anti-apartheid activist Denis Goldberg, who spent two decades in a South African prison for his activism and briefly lived in Israel before moving away in protest, has also called Israel an apartheid state.

“There is no doubt in my mind that Israel is an apartheid state,” he said in 2015. “Having lived through apartheid in South Africa, I cannot allow in my name the same kind of oppression to go on.”

Nelson Mandela, South Africa's first black head of state, insisted in an interview on ABC's "Nightline" in 1990, “we identify with the PLO,” referring to the Palestine Liberation Organization. “Just like ourselves, they are fighting for the right of self-determination.”

Anti-apartheid activists have since stressed that the apartheid regime in South Africa was an ally of Israel, as well as of the U.S.

Prominent Israeli journalists have also spoken openly of Israeli apartheid. In August, Bradley Burston, a senior editor and columnist at Israel's leading newspaper Haaretz, penned an article titled “It’s Time to Admit It. Israeli Policy Is What It Is: Apartheid.”

And it is not just Palestinians living under illegal military occupation who endure apartheid, rights advocates say. Israeli human rights organization Adalah has documented more than 50 laws “that directly or indirectly discriminate against Palestinian citizens of Israel in all areas of life.”

As a means of resisting Israeli apartheid, Desmond Tutu has joined others in endorsing Boycott, Divestment and Sanctions, an international grassroots movement that uses peaceful economic mechanisms to pressure the Israeli government to abide by international law and respect Palestinian human rights.

Explaining his support, Tutu said, “In South Africa, we could not have achieved our democracy without the help of people around the world, who through the use of non-violent means, such as boycotts and divestment, encouraged their governments and other corporate actors to reverse decades-long support for the apartheid regime.”

He added: "The same issues of inequality and injustice today motivate the divestment movement trying to end Israel’s decades long occupation of Palestinian territory and the unfair and prejudicial treatment of the Palestinian people by the Israeli government ruling over them."