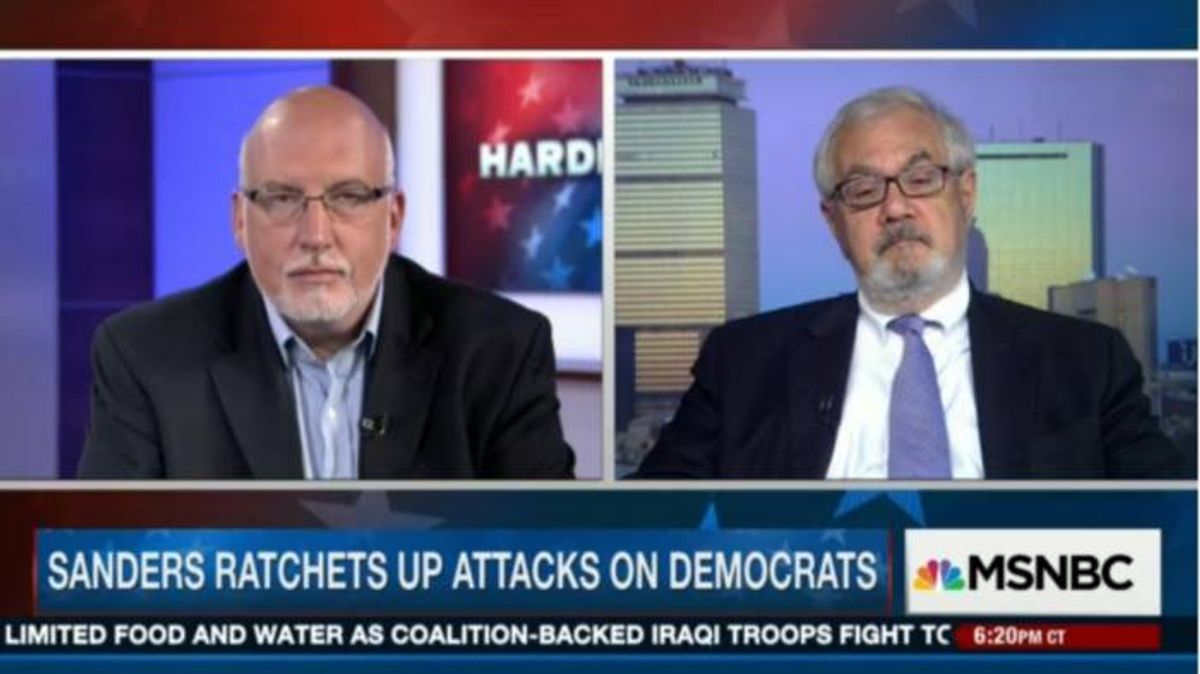 Tensions are running high between Hillary Clinton's campaign and Bernie Sanders' campaign during the final stretch of this protracted Democratic primary and some of the most contentious moments are caught on live television.

“Sen. Sanders is disappointed that he hasn’t won,” Frank, who has been a vocal critic of Sanders, said during an earlier interview with MSNBC's Kate Snow. “He’s losing not because anything was rigged or there was dirty trickery. He’s losing because Hillary Clinton has gotten more votes.”

Over the weekend, the Sanders campaign demanded that Frank and Connecticut Governor Dan Malloy be removed as co-chairs of the Rules Committee and Platform Committee, respectively, claiming that they were "self-proclaimed partisans intent on marginalizing" Sanders.

"Governor Malloy and Mr. Frank have both been aggressive attack surrogates for the Clinton campaign. Their criticisms of Senator Sanders have gone beyond dispassionate ideological disagreement and have exposed a deeper professional, political and personal hostility toward the Senator and his Campaign," a letter from the Sanders campaign to the co-chairs of the DNC's Rules and Bylaws Committee read.

"In a March interview, Mr. Frank defamed Senator Sanders as 'outrageously McCarthyite,'" the letter said, citing a March interview with Slate during which the former congressman harshly criticized Sanders' suggestion that Clinton would have a major conflict in dealing with Wall Street because of the millions of dollars in speaking fees and campaign contributions she has received from big banks.

Although Sanders' petition to run out the first openly gay member of Congress was ultimately rejected by the DNC, his campaign has vowed to take the fight to the convention floor in Philadelphia next month.

On MSNBC's "Hardball" Wednesday, Frank faced off against Sanders Campaign Manager Jeff Weaver on this issue.

Noting that Sanders has taken to describing longtime liberal icons like California Governor Jerry Brown and Senator Barbara Boxer as the "establishment," host Chris Matthews opened by asking Weaver, "are you guys still trying to remove congressman Frank as chair of the Rules Committee?"

Weaver said the campaign wanted people who "may have been Clinton supporters," but "have played a less divisive role."

"I am somewhat surprised to hear a Sanders representative complain about divisive rhetoric," Frank responded. "It seems to me that both he and I, Senator Sanders and I, have been very willing to speak out and be critical of other people."

Frank went on recall that Sanders had called on his fellow New England lawmaker to campaign on his behalf.

"And frankly as a senior member of the Banking Committee sometimes when I did fundraisers a banker or two showed up," Frank snarked. "So I hope for the sake of Senator Sanders' purity they can scrub that and see if maybe they need to give some money back."

Matthews then jumped in with his usual hardball style of interviewing, pestering Weaver about the campaigns plan to fight Clinton at the convention.

"According to your candidate, he says he wants to wait until the superdelegates actually cast their votes. Well, they don't actually cast their votes until you cast the votes on the Wednesday of the convention. How does he get a speaking gig on Monday or Tuesday night at the sufferance of the probable nominee if doesn't concede the election until he loses until Wednesday?"

"If you are still running against Hillary Clinton, why should the convention give you a speaking opportunity to speak against the probable nominee Monday or Tuesday night?" Matthews pressed Weaver.

"It is not about giving, it is about over 10 million people who supported Senator Sanders," Weaver replied.

Matthews, of course, wouldn't let up, setting up a final trap for Weaver before the segment ended.

"Jeff, one last question: Why do you think Donald Trump is holding out on releasing his tax returns?"

"There is obviously something he is trying to conceal," Weaver said of Trump. "He ought to release his tax returns."

"You just said that Trump is hiding something, by not releasing his tax returns," Matthews noted. "What is your candidate hiding?" he asked, mentioning that the Vermont lawmaker has thus far only released one year of returns.

"My candidate is not hiding anything," Weaver asserted.

"But then why doesn’t he release his tax returns?" Matthews asked.

Watch the rest of the blow up below, via MSNBC: