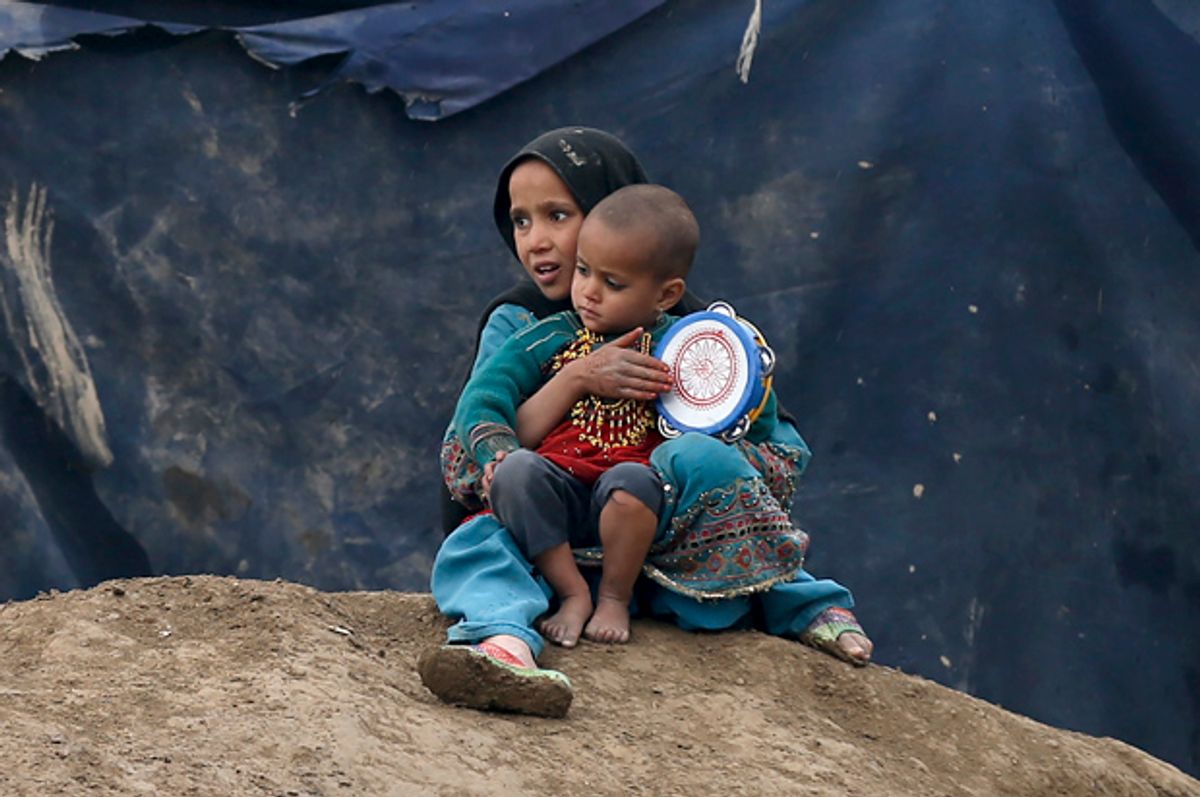 Nearly 15 years after the U.S. invaded Afghanistan, the country's civilians continue to bear the brunt of the costs of the war.

The number of Afghans "who have fled violence and remained trapped in their own country, where they live on the brink of survival," has doubled in just over three years, Amnesty International says.

Today, an overwhelming 1.2 million Afghans are displaced inside their country. This is a rise by roughly 240 percent since 2013, when some 500,000 people were internally displaced in Afghanistan.

This does not even consider the estimated 2.6 million Afghan refugees who live outside of their country's borders. Afghans make up one of the world’s largest refugee populations.

A new report by Amnesty International, "'My Children Will Die This Winter': Afghanistan’s Broken Promise to the Displaced," highlights the plight of displaced Afghans, hundreds of thousands of whom lack access to shelter, food, water, health care, education and employment.

"While the world’s attention seems to have moved on from Afghanistan, we risk forgetting the plight of those left behind by the conflict," warned Champa Patel, Amnesty's South Asia director.

“Even after fleeing their homes to seek safety, increasing numbers of Afghans are languishing in appalling conditions in their own country, and fighting for their survival with no end in sight,” Patel added.

A 50-year-old Afghan woman living in a camp for displaced people told Amnesty, “Even an animal would not live in this hut, but we have to."

"I would prefer to be in prison rather than in this place," she said. "At least in prison I would not have to worry about food and shelter."

And it is not just the number of internally displaced people, or IDPs, that has grown. The plight of displaced Afghans "has dramatically worsened over the past years," Amnesty noted.

“Food is a luxury here, no one can afford it,” a community leader in an IDP camp told Amnesty. "We mostly live off bread or spoiled vegetables from the market."

The majority of IDP communities lack access to basic health care. Displaced Afghans are forced to beg for medical treatment, saying they "have no other choice." This precarious climate leads to large debts for even minor medical procedures.

Displaced children have been unable to get an education, and adults frequently cannot find jobs to sustain their families. This hardship has forced many young children to work odd jobs, doing things like washing cars, polishing shoes and collecting plastic bags to resell.

The hardship more than a million displaced Afghans endure, Amnesty noted, is "creating circumstances where women are excluded, and children are being exploited and not educated."

Since the 2001 U.S. invasion, successive U.S.-backed Afghan governments have promised to help IDPs, but have failed to do so. Amnesty says numerous factors are responsible, including corruption, an "enormous lack of capacity and expertise" and "fading international interest."

With other humanitarian disasters unfolding in the Middle East and North Africa, "aid to Afghanistan is dwindling," Amnesty noted. The U.N. requested U.S. $393 million in humanitarian funding for Afghanistan in 2016. This was the smallest figure in years, in spite of the growing needs, yet, by May, the U.N. had less than a quarter of the funding it requested.

Amnesty International produced a video to accompany the report. It can be watched below:

For hundreds of thousands of Afghans, the results of the nearly 15-year U.S. war in their country have been nothing short of disastrous.

The Obama administration expanded the U.S. war in Afghanistan — and not just once, but twice. This is in spite of the fact that Obama campaigned for reelection on the promise to end the war by 2014 — a promise he reiterated constantly.

After Vietnam, the war in Afghanistan is the longest conventional war in U.S. history. Numerous reports estimate it has cost at least $1 trillion tax dollars.

More than 220,000 Afghans were killed in the first 12 years of the war, according to a report by the Nobel Prize-winning organization International Physicians for the Prevention of Nuclear War. Today, Afghans continue to die at record-high levels.

Afghan casualties have steadily increased since 2012. Nearly 2,000 Afghan civilians were killed or wounded in the first three months of 2016, according to the United Nations Assistance Mission in Afghanistan.

Children are making up a growing percent of the casualties, the U.N. mission reported with “extreme concern.” Close to one-third of civilian casualties in the first quarter of 2016 were children, an increase of 29 percent from the same period in 2015.

This is especially troubling considering the violence in 2015 was the worst since the U.N. began tracking the casualties. More than 3,500 Afghan civilians were killed and another roughly 7,500 were injured.

Anti-government forces, primarily the Taliban, are responsible for the majority of casualties.

The Taliban emerged out of the aftermath of the Afghanistan war in the 1980s, in which the U.S. and its allies Pakistan and Saudi Arabia trained, armed and funded extremist Islamist militants in order to fight the Soviet Union.

Now, the Taliban is as strong as it was when the U.S. invaded in 2001. The U.N. reported in September that the extremist group had spread through more of Afghanistan than at any point since the beginning of the U.S. war.

Afghan refugees fleeing this extreme violence and seeking asylum in the West have faced intense discrimination, and even deportation.

Amnesty noted in another report that nearly 200,000 Afghans applied for asylum in the E.U. in 2015, four times as many as the year before.

Yet, as Salon has reported before, Europe is deporting hundreds of Afghan refugees back to their war-torn homeland, in what rights experts say is a flagrant violation of international law.

In another, more recent deal with Turkey, the E.U. is deporting refugees from Afghanistan and elsewhere to Turkey, where they may not be safe. Legal experts say this plan is illegal, not to mention immoral.

In its new report, Amnesty International called on the parties that have been involved in the war in Afghanistan — which would primarily be the U.S. and NATO — to fulfill their "responsibility" to help fix the mess they made.

“All parties that have been involved in Afghanistan over the past 15 years have a responsibility to come together and make sure that the very people the international community set out to help are not abandoned to an even more precarious fate,” Champa Patel said.

“Afghanistan and the world must act now to end the country’s displacement crisis, before it is too late.”