It could happen to any one of us: Teaching in a culture of violence

The UCLA tragedy is the worst nightmare for teachers like myself 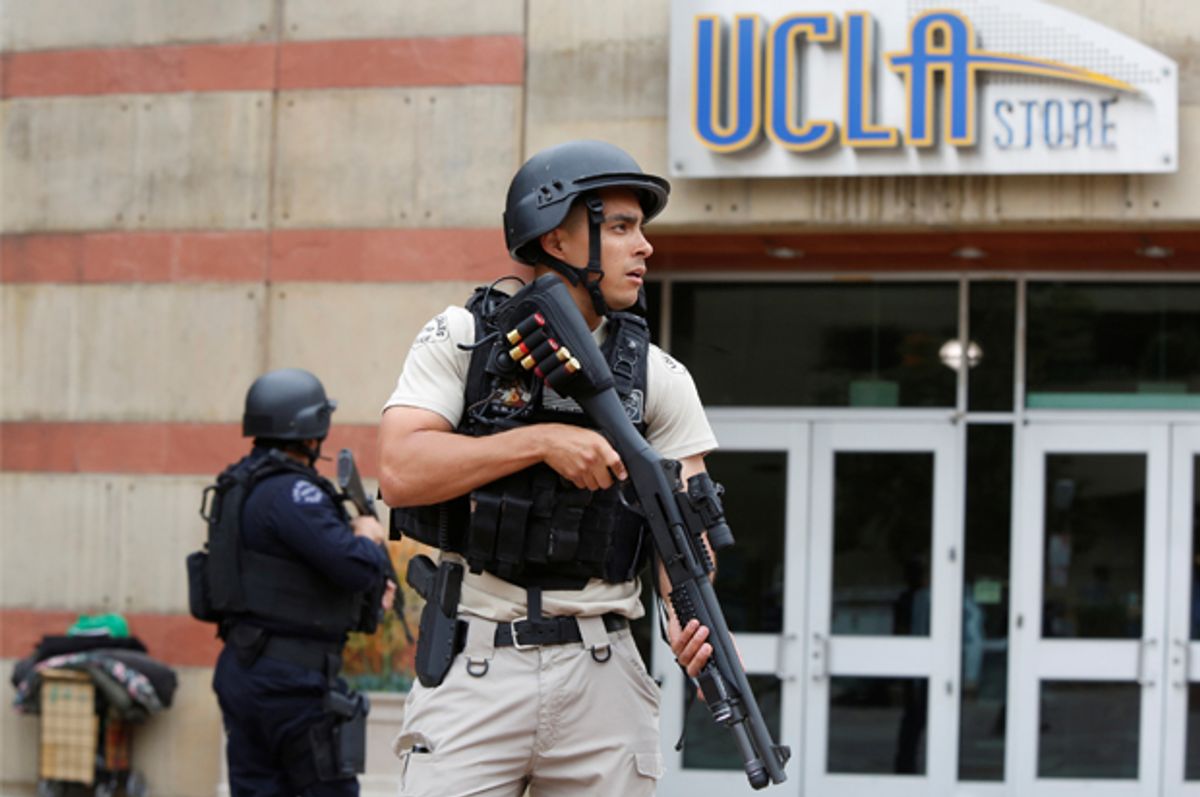 In my nine years of teaching at the university level, thousands of students have come through my doors. Many have been engaged and thoughtful and energized by learning. Many have been civil but apathetic. Only a handful of them have made me experience physical and psychological unease. But I remember them well.

One student wrote a fictional story strewn with misogynistic comments, swear words and violence. When I returned his story with a D — not for the explicit content but for turning in incomplete work full of grammatical errors and without a plot — I could see him seething under the surface. He was my age, stood more than a foot taller, and after class, he erupted, spewing hostility and accusations at me. I felt every muscle in my body tense and from that moment forward, I made sure I was never around him alone. It was a night class and I always left with my students, walking at a quick clip to my car. I consulted my supervisor to tell her what had happened in case I needed additional support.

Another time, in office hours, a student who I had observed as having difficulty engaging socially in the classroom came to see me late, after five, when many other instructors weren’t around. He arrived to discuss his grade, his body a maelstrom. He paced back and forth and when I invited him to sit,  he refused. He fidgeted and ranted, his voice becoming louder and more agitated, and as I attempted to de-escalate him through neutral words and a calm tone, I began to think about the nearest exits, to calculate my distance from the office phone.

When I saw the news Wednesday about UCLA Professor William S. Klug’s murder by his student, Mainak Sarkar, I was leveled but, sadly, not shocked. The worst nightmare of teachers had become reality. I thought of the contentious moments I had with students, particularly those who seemed unaware of their own level of disturbance and rage. I thought of the times when I stood alone with a student, unsure of how to de-escalate his frustration. I thought of the countless hours Klug spent preparing his lectures, evaluating student work, sitting in his office waiting to help students.

It’s happened, I thought to myself. The biggest fears pulsing under the surface of my near-decade of teaching have been: What would I do if a shooter came into my classroom and threatened my students and me? What would I do if a student tried to attack or harm me when I was alone? I have no idea what I would do. But I have thought about fire codes and desks repurposed as shields. I have despaired about what I could possibly do in underground classrooms where I have taught that had no cell phone reception. I have looked for emergency exits.

When we talk about increased shootings on campus, there's not one thing to point to. It seems that in this student’s case, as with others, there were mental health issues involved. However, while a certain number of students have always struggled with mental health issues, the eruption of violence on campus is a relatively new trend, one that has escalated in recent years. According to Everytown for Gun Safety, “Since 2013, there have been at least 186 school shootings in America — an average of nearly one a week.” The rate of mass shootings has tripled since 2011, according to Harvard School of Public Health. The rise in violence, the escalation of these incidents tell me that people are in crisis and that taking a gun and shooting someone who you suspect of having wronged you feels like an acceptable form of protest.

Originally, the reports were that the student had murdered his professor over a grade. While that report changed to his belief that his professor had stolen his computer code and thus access to his work, the reality of students’ severe upset over grades is real. I teach at The University of Arizona, where, in 2002, a nursing student distraught about his grades killed three of his professors before killing himself.

Over the years, I’ve seen grade inflation happen across the university and in my own grade books. Much of this happens over time, a slow, sometimes unconscious, reaction to the practice of teacher course evaluations, wherein students comment on their teacher’s performance. These evaluations have been widely criticized and shown as more of a measure for student bias than teacher effectiveness. But I also know that all of us who have taught for a certain length of time have engaged with this handful of students. The ones we felt threatened by. How many times have we had to decide between our potential physical or mental-well being and a grade?

According to The Los Angeles Times, “Klug, who was described by friends as a kind and caring man, bent over backward to help Sarkar finish his dissertation and graduate even though the quality of his work was not stellar, the source added. ‘Bill was extremely generous to this student, who was a subpar student,’ the source said. ‘He helped him out and interceded for him academically.’"

One of these teachers is a good friend and colleague of mine who had the experience last year of arriving to her college campus to find it on lockdown, with a line of police holding automatic rifles guarding the buildings. She turned her car around, drove away, and quit her job. She had watched — as we all have — the increase of violence on campuses and this was the final straw.

Right now, I’m thinking about Professor Klug and his family, his wife and his two small children who will now grow up without their father. And I’m thinking about all of my colleagues, passionate about teaching, just doing their jobs, and I wish them, more than anything else, safety.

Lisa M. O'Neill is a writer based in Tucson, Arizona whose work explores pop culture, politics, gender, class, race, and mass incarceration. You can find her at lisamoneill.com or at @thislisaoneill on Twitter