Killing with kindness: "Lady Dynamite" and "Kimmy Schmidt" prove nice women can be funny and complex, too

In the boisterous cocktail of sex, swagger & self-deprecation that defines so much comedy today, these 2 stand out 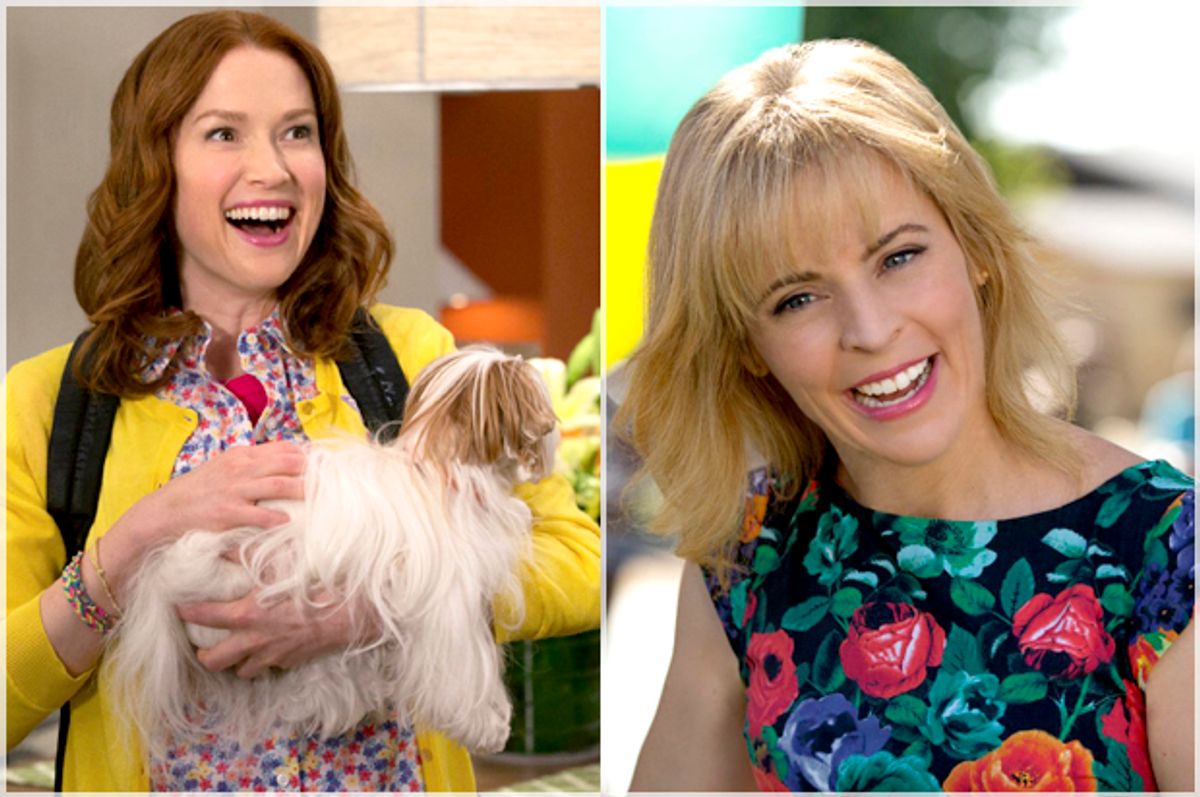 In the first episode of "Lady Dynamite," Maria (played by comedian Maria Bamford) yearns to have a park bench in front of her home in order to foster a greater sense of community. She first came up with this idea in group therapy (we get flashbacks to her time in inpatient and outpatient treatment facilities) when constructing her vision board out of colorful construction paper and magazine clippings.

Throughout the series, Maria’s character is defined by many traits—her exuberance (which sometimes relates to manic episodes) her love of pugs, her hesitance about intimacy, but above all, the thing that most defines Maria is her kindness. Maria is primarily motivated by her identity as someone who wants to treat people well and make the world a better place. When we first meet her, we find her deeply invested in making amends with people who she fears she may have harmed during her breakdown. As the season unfolds we learn that though Maria struggles with various mental illnesses, there isn’t a cruel bone in her body. In one therapy session, a counselor tries to coax Maria into being more mean and aggressive. After goading her on and on with mean comments, Maria eventually retaliates with her own, and is so terrified that she may have hurt someone’s feelings that she abruptly leaves.

The contrast between Maria’s delicate interior world and the often selfish, vacuous and cruel world she is trying to navigate is what makes for a great deal of the show’s drama, rather than the boisterous cocktail of sex, swagger and self-deprecation that defines a lot of comedy today. In a world where “be more badass!” seems to be the feminist rallying cry du jour, Bamford’s insistence on nurturing the self and helping others is strikingly gentle.

"Lady Dynamite" shares a good deal with Netflix’s other nice girl Kimmy Schmidt, whose bright smile and eager embrace of the world is intensely optimistic. If Season 2 of "Unbreakable Kimmy Schmidt" is about, as The Atlantic’s Megan Garber argues, Kimmy overcoming her need to constantly people-please, it’s also about how Kimmy’s complexities don’t make her any less of a nice person. At the end of Season 2, Kimmy is shown to have grown a lot through therapy and learning how to better assert herself, while her core desire to be a good person and help other people stays veritably intact.

These twin portrayals of female niceness are not some kind of retrograde feminist backlash. Rather, "Lady Dynamite" and "Unbreakable Kimmy Schmidt" are actually pushing the conversation forward about what makes complex female characters; both Maria and Kimmy shine through precisely because their desire to be good people is depicted as deeply human. For the last several years, the word “nice” has almost become a pejorative to describe female characters, with many writers and cultural critics urging us to embrace “unlikable” protagonists instead. We’ve rallied around complicated characters like the lady antiheroes on "Jessica Jones," and the entire Pfefferman clan (minus Josh) on "Transparent." We’ve watched in awe as female prisoners threaten each other, cheat, fuck, talk dirty and do drugs on "Orange Is the New Black." Each of these shows allows women to be presented as deeply nuanced subjects, rather than simply background characters or mere eye candy. "Lady Dynamite" and "Unbreakable Kimmy Schmidt" add to the progressive tradition of centralizing the female experience by allowing genuinely nice female characters to be seen as worthy of complex portrayal, too.

This isn’t to say that Maria and Kimmy don’t sometimes do things for selfish reasons. Maria often refuses to see things as they are, insisting for a long time that the company “Checklist” (clearly modeled on Target, which the very real Maria Bamford did a series of very popular ads for) is exploiting their workers in Mexico. Likewise, Kimmy’s insistence on optimism sometimes ends up masking her own pain. In a particularly shocking sequence, Kimmy shares the fantasy world of cheerful forest creatures that sing when she is feeling angry or upset; as she begins to work on her PTSD the scene devolves into a violent (and very bloody) nightmare.

In this way, both Maria and Kimmy are also allowed to make mistakes, and even have some pretty destructive tendencies, without simply being reduced to “bad people.” In fact, each show insists that niceness can be a genuine character trait, rather than a mere construct that women are forced to portray in order to be “likable.” Kimmy and Maria aren’t empty ciphers; they are complicated people, struggling with mental illness and a world that doesn’t always understand them or their experiences.

Each show also adds to the broader conversation of whether women need to be more stereotypically masculine in order to be perceived as strong and interesting. Maria and Kimmy are “girly-girls” through and through, from their wardrobe choices (in one of my favorite scenes in "Lady Dynamite" Maria carries an adorable snail-shaped purse) to their interests (love for cute animals and crafts like vision boarding and scrapbooking are prominent throughout both series). In a world where female characters are often declared interesting when they can keep up with or surpass the bad-boy antics of their peers (see Elaine on "Seinfeld" or Lindsay and Lucille in "Arrested Development") Maria and Kimmy are defined by their own sense of self, rather than the male characters who surround them.

The focus on crafting complex female characters who are kind rather than cruel is especially important considering the subject matter. We live in a culture where there are still intense stigmas surrounding mental illness, and it’s easy to dismiss cruel characters as “crazy” even when we find them deeply interesting (see Amy Dunne in "Gone Girl," whose destructive behavior has most often been described as “insane” by moviegoers and critics alike, and Mavis Gary in "Young Adult," whose cruel behavior was described as a product of alcoholism by Roger Ebert). In contrast, "Lady Dynamite" and "Unbreakable Kimmy Schmidt" do something much more subversive; they remind us that complicated female characters, like complicated female people, are often genuinely good.