Cake and death: Why we need to get together and talk about dying 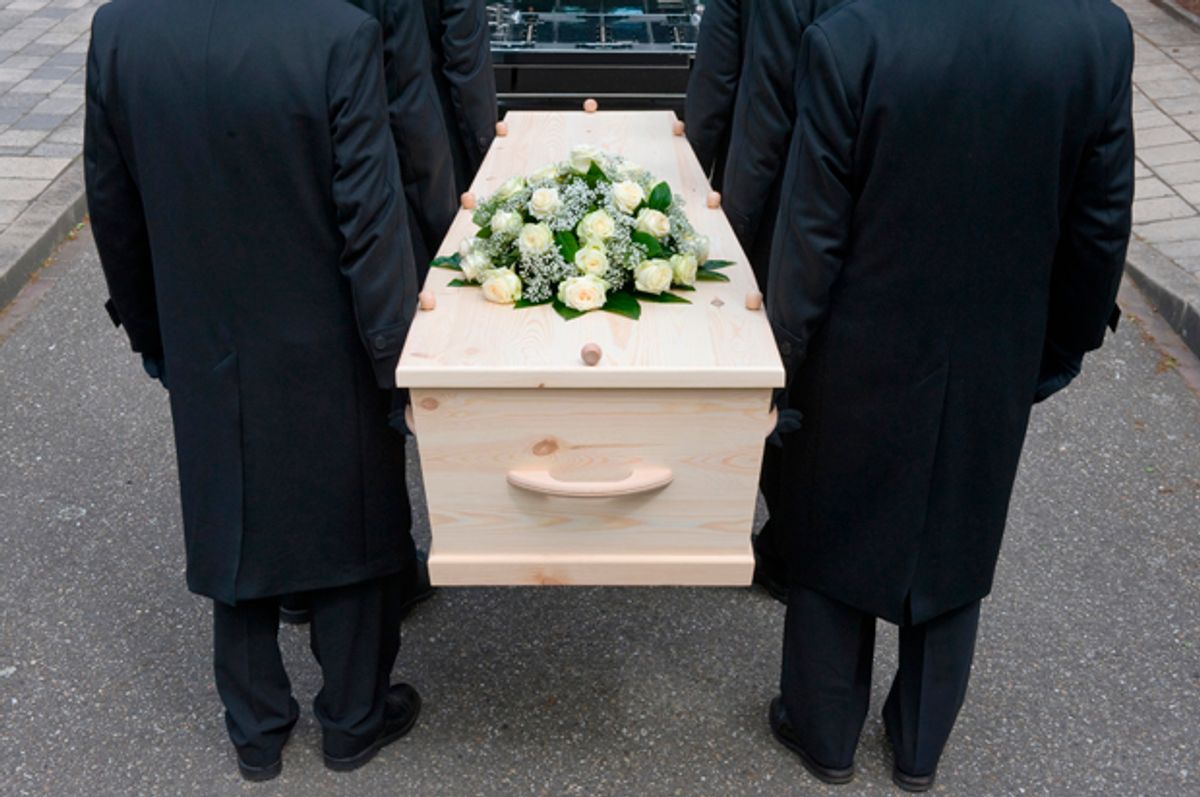 The sky looked like abalone shells taking on a darker complexion, the threat of rain advancing over the small town. I was running late and hurried into a restaurant overlooking a gently moving river. As I took my seat, a middle aged woman was ending her sentence: “... it’s about living life with death on your shoulder.” A plastic skull lay on a table across the room that held roughly 40 people, all of whom were middle-aged or in their twilight years — death sitting on their shoulder a little more heavily than mine. Or so I hoped, considering that many are twice my age.

This is a death café. A week earlier, a blurb in the local paper of the small, picturesque town of Damariscotta, Maine announced the event: “Lively discussion with cake.” it read. “Free, open to the public. Not a grief group.”

The café has a simple premise: to gather, eat cake and talk about death. Lynne Tobin, a licensed therapist and grief counselor, founded the death café in Damariscotta three years ago. The monthly gatherings were inspired by web designer and entrepreneur John Underwood, who founded Death Café in the UK in 2011. Since that time, cafés have grown in popularity and have been held all over the world.

Tobin recalls that the initial response from the community was that the word “death” should be removed from the name. She steadfastly refuses. “It’s important because we live in a death-denying culture," she explains. "We don’t talk about death. We don’t even call it what it is,” using instead euphemisms such as “passing away” or “bought the farm.” “We don’t call it death, because we’re very afraid of it.”

“What is a very normal part of our living experience has been made a taboo,” she adds. Part of overcoming the fear and dismantling the taboo is to eliminate the euphemisms and have open and honest conversations about death.

At the death café, Tobin speaks in calm, even tones and is quick to laugh with the group when a joke offers a welcome break during discussions of cremation and end of life issues. There is no set agenda, and the conversation soon turns to the personal. “When did you first see a dead body?” Tobin asks the group. The responses vary from seeing dead relatives laid in coffins to teenagers who, having snuck into a morgue, had the misfortune (and impeccable timing) of passing by a man who was shot dead outside a bar.

The question causes me, however, to have a momentary lapse in cognitive thinking. It wasn’t silent-still bodies I thought of, but a small box. An imaginary snap of the fingers, like a hypnotist lulling me back in time, and I am back in sunny Los Angeles.

He was unrecognizable at the funeral. He was disguised as a box. I think it measured 4 by 6 inches, though I can’t be certain of the exact dimensions because I had no ruler to confirm. I could only confirm that the box was wooden and small enough to carry with both hands. My own hands trembled at the thought that my father’s physical form transformed into the outer contents of a box. Death happened in a foreign land that I could not get to nor comprehend. I’m assuming this is where the vaudevillian transubstantiation took place: body into box.

Humans have cared for the dead and dying for thousands of years, but by the 20th century death was taken out of the home and placed in hospitals and mortuaries. Mortician and New York Times bestselling author Caitlin Doughty explains that the view that dead bodies are “dangerous” originated in the late 19th century. The now-debunked Miasma theory held the belief that “bad air” floating from decaying things, such as dead bodies, caused disease. Morticians became the stewards of public health, replacing families in caring for the dead. They were and still are viewed as protecting the public from death. But Doughty argues, “The living doesn’t need protection from the dead."

Last year Doughy opened up Undertaking LA, a fully licensed funeral home in Los Angeles, California. The funeral home offers services in home funerals, cremation and natural burial. The mission of the funeral home is to “allow families to reclaim rightful control of the dying process and care of the dead body.” Participating in the process of caring for the dead of our loved ones can help to overcome death denial and also with the grieving process.

“As you sit with body, little changes happen, both physically in the body,” Doughty explains. “And little emotional changes happen to you as you can see that taking place. It becomes very clear that this person is not coming back.”

Doughty argues that death denial has affected the spaces where we bury the dead. In her book, "Smoke Gets in Your Eyes and Other Lessons from the Crematory," Doughty cites a 1959 Time Magazine article entitled “The Disneyland of Death” about Forrest Lawn Cemetery in Glendale, California. The goal of the cemetery, the article states, is to “erase all signs of mourning” replacing traditional headstones with flat markers and filling the cemetery with art and sculptures. Doughty surmises, “Forrest Lawn became well-known for its aggressive, beautiful-death-at-all costs policy.”

Interestingly, a year after the article was published, “Elegy” aired on the popular television show "The Twilight Zone." In the episode, three lost astronauts have landed on an asteroid that looks identical to Earth, with one exception: People are frozen stiff in poses that mimic fishing, beauty contests, and mayoral celebrations — all the trappings of a Norman Rockwell painting. The astronauts soon discover to their horror that they are in a cemetery. The people in the town are actually corpses who paid to have their bodies beautified and posed in ideal settings for all eternity. Looking on the episode with 21st century eyes, the episode is the most extreme form of death denial. It is the Forrest Lawn of the future, where all signs of death and mourning are erased and the corpse is beautified in eternity.

The corpse is a terrifying specter. What was once a normal occurrence in our lives now inhabits the shadowy realm of the unknown. We have taken great pains to hide the dead through the use of funeral homes and erasing signs of death in our cemeteries. Corpses have disappeared from view but have entered our psyche and filtered out as euphemisms, funeral home contracts and, even 50 years after the "Twilight Zone" episode aired, continue to live on in TV crime dramas and zombie apocalypse movies, rotting, speechless and sometimes moving at us at tortoise speed. Part of overcoming the fear, however, is in engaging with the unknown.

It was a hot September day in Cottonwood, Arizona. I was looking at my great-grandmother. She had the most beautiful hands. Growing up in a poor immigrant Hungarian family, and not averse to bootlegging whiskey during Prohibition, those hands worked hard, but they didn’t show it. She had slender, elegant fingers, even when she died at the age of 102. I remember those fingers clasping a rosary or holding a glass of iced tea as we sat in the backyard of her home during my beloved summer visits with her. Even there, at her wake — though she was painted with a little too much rouge (“she’s a party girl,” my mom joked) — her hands, which were folded neatly over each other, nails painted red to match the rouge, looked as they had in life. Though I was not present for the “tiny changes” that took place, seeing my great-grandmother at the wake allowed me to say goodbye and grieve. Unlike my father’s body, there were no magic tricks performed on her, save embalming and some make-up. Reality was less terrifying than an unmarked box.

Sitting in the room with my great-grandmother seven years after my father died, I found that death does not occur in some foreign place, but in the land of the living. And it is in this land that we can come together at places like the death café in small towns in Maine to talk not only about death, but also about life.

Tobin recalls a past café when the discussion turned to love and the meaning of life. “The consensus of the group is that life becomes meaningful when we have love in it.” She adds, “It’s not so much about dying but about living.” There can be no life without death, and to acknowledge that we co-exist with the dead, especially by sitting with our loved ones when they die, is an act of both love and acceptance.