Criminal injustice in Texas: Thousands stay jailed in just one county because they can't pay bail — and it's happening all over the U.S. 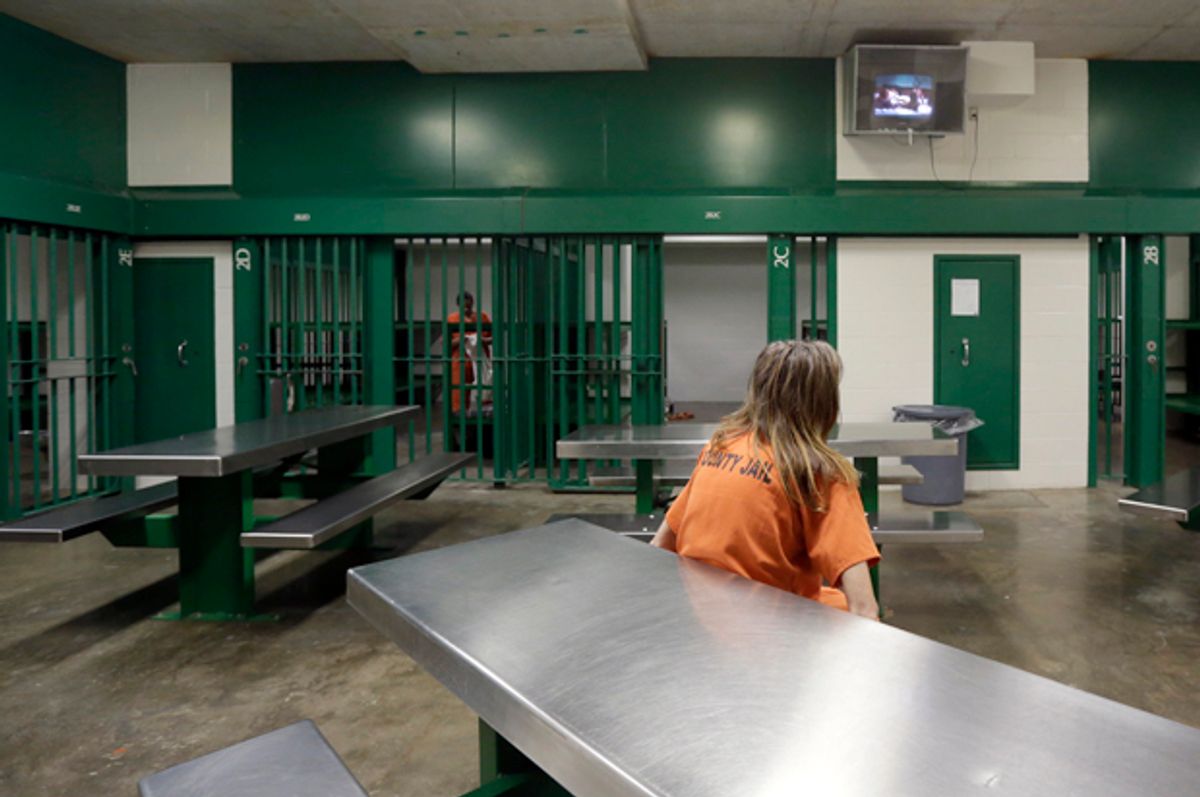 What happens if you get arrested in Harris County, Texas?

If you’re charged with a minor misdemeanor, like 22-year-old Maranda ODonnell, who was charged in May for driving with an invalid license, the officer that arrested you calls the assistant district attorney that’s on duty, who decides, usually over the phone, whether to charge you or let you go.

If they decide to charge you, as they did with ODonnell, they determine how much your bail will be. If you can pay it, you’re immediately released, without even being booked into the jail. If you can’t pay, you’re booked. The amount you have to pay is determined by the Harris County Bail Schedule.

As of March, there were more than 6,800 inmates in the Harris County Jail who hadn't been convicted of any crime, simply because the could not make bail.  It costs Harris County $75 per day, per person.

Once booked, and usually within 24 hours, you’ll be brought in with a group of 25 to 40 others to appear before a hearing officer. You aren’t offered an attorney if you can’t afford one yourself .The hearing officer will determine whether there was indeed probable cause for your arrest, and if your bail amount was set correctly.  Then, you either pay up and walk out, or stay locked up.

ODonell’s bail was set at $2,500, which she could not pay. And so she was incarcerated in the Harris County Jail, unable to care for her young daughter or go to her new job at a restaurant.

Loetha McGruder was pulled over on May 19 for allegedly driving 10 miles over the posted 40 mph speed limit, and brought in on a misdemeanor charge of failing to present proper ID to the officer who pulled her over. The young mother of a 4-year-old and a 10-month-old had her bail set at $5,000. She could not afford this, and was held away for five days from her children, one of whom has Down Syndrome and requires special care.

In March, Harris County taxpayers paid $513,075 per day to house individuals, like ODonnell and McGruder, who hasn't been convicted of a crime. A Houston Chronicle investigation found that between 2009 and 2015, 55 people died in the Harris County jail awaiting trial after being unable to pay their bail.

The American money-bail system, plays a significant role in the numbers of incarcerated people across the country. More than 60 percent of people in America’s overcrowded jails are there because they can’t afford to pay their bail. This amounts to about 450,000 Americans in jail on any given day.

A recent study out of Columbia University correlated the impact of assigning money bail to both the likelihood of a guilty plea and recidivism rates. The study found that the assignment of money bail causes a 6% rise in the likelihood of pleading guilty, and a 4% rise in the likelihood that a person would return to the jail in the future. According to a 2013 study that examined the experiences of 153,407 defendants in Kentucky, severing the connections that allow an individual to retain employment, housing and family through detention on money bail, even for a short period of time, reduces the likelihood that an individual can successfully return to society and increases criminal recidivism rates. Being in jail for just two to three days increases the likelihood that a low-risk defendant commits a crime before trial by almost 40 percent.

On May 19, lawyers at an organization called Equal Justice Under Law filed a federal lawsuit on behalf of ODonnell and  McGruder and thousands of others held in Harris Country on misdemeanor charges because they cannot afford their bail. The lawsuit names Harris County Sheriff Ron Hickman, who oversees the jail, and the five county hearing officers that review these cases and determine the bond.

Elizabeth Rossi, an attorney with Equal Justice Under Law, representing ODonnell and McGruder, told Salon that this is a national problem. With very few exceptions, counties and cities across the country are setting bail regardless of how much a person can afford to pay. This means that wealthier people are able to walk free and poor people are locked up, despite the presumption of innocence. Her organization has settled cases in Louisiana, Mississippi, Tennessee, and Georgia to successfully end money bail, and has cases pending in several places, including New Orleans, Sacramento, San Francisco and Ferguson.

She sees ending such practices as a clear issue of unfair treatment and discrimination, telling Salon about a night just a few days ago, “I was waiting outside of the jail late Monday night [May 23] for my client to be released and learned that there is a cab stand outside the jail. A cab driver said that the place they most frequently take people just released is to the hospital. If you have a few hundred or a few thousand dollars, you pay your bail and avoid the physical and emotional harms of incarceration. If you don't have the money, you have to endure them. That is not just a human and moral emergency; it violates the Constitution.” The lawsuit cites the Fourteenth Amendment’s Equal Protection and Due Process Clauses prohibit jailing a person because of her inability to make a monetary payment.

Jay Jenkins, an attorney with the Texas Criminal Justice Coalition, an organization that focuses on issues in Harris County told Salon about the role that Harris County judges play in upholding this system.

“The bail schedule is promulgated by the judges in Harris County, many of whom regularly accept campaign donations from bail bondsmen," Jenkins said.

Jenkins says that Texas law requires an individualized bail hearing for every defendant. Instead of offering every defendant a bail hearing, so that an appropriate bail can be set, Harris County relies on a bail schedule, a functional shortcut in the process.

It also seems that this system is set up through an uneasy and problematic relationship among the business of bail bonds and Harris County Judges and politicians. In fact, one of Houston’s City Council members, Michael Kubosh is himself a bail bondsman.

And, of course, many of those put through this ringer are low-income people of color. Brandi Holmes, an organizer and leader with BLM HTX, tells Salon that ending these unjust bail policies “has the potential to revolutionize the way the criminal justice system operates and the trust that people have in the system and local law enforcement. Because right now there’s none.”

Holmes is one of several Houston leaders who is working on drawing attention to the racial disparities in the system. In fact, Harris County recently received a MacArthur Safety and Justice Challenge Grant of $2 million, to research and implement criminal justice reform aimed a keeping low-level, nonviolent offenders out of jail and reducing the burden on poor and minority defendants.

Devon Anderson, the Harris County district attorney told the Houston Chronicle, "As research continues to mount on the negative impact that jail and prison can have on low-level offenders, the mentally ill, and communities of color, [Harris County] can no longer afford to operate with a 'business-as-usual' mentality. As in most jurisdictions, people of color are over-represented in the Harris County jail."

Houston’s organizers don’t have faith in Anderson to adequately address the issue of racial discrimination and have mounted a campaign to call for her removal. The “#ByeDevon” campaign released a statement citing their grievances. Specifically, they cite the very small amount of the lager grant that is allocated to addressing the racial and ethnic disparities in the jail system. Biko Mandela Gray, a PhD candidate at Rice University, and a community organizer with the local organization, Truth 2 Power, tells Salon, “As we already know, many black and brown communities are plagues by poverty and low-wage jobs. Connect this to the fact that law enforcement agencies overprice communities of color and you have a perfect storm of  race-based mass incarceration and race-based continued detention.”

Half of Harris County’s Jail population is African-American, despite making up only 15-20% of the population in the county. Add to this the over-policing of the Latino population, and you’ve got a clearer picture of what’s going on in Harris County under the watch of Sherrif Ron Hickman and D.A. Devon Anderson.

Amazingly, the same people who preside over the current disastrous system are the ones charged by the MacArthur Foundation with implementing changes to address the problem.

“We are seeking systemic change through the lawsuit.”  She says that lawsuit is not seeking damages for her clients, simply fair treatment in accordance with state and federal laws. She knows the impact of such unfair policies, namely that “a person is more likely to plead guilty and will end up with a longer sentence if she is detained while awaiting trial. But coercing guilty pleas is not a legitimate function of a criminal legal system.”

Gray connects the issue of bail practices to the larger problems in Harris County’s criminal justice system, saying that these, “bail practices are one extension of an increasingly complex and incredibly discriminatory criminal justice system in Harris County.” Citing the recent gang injection in Houston’s Southlawn neighborhood and the discriminatory 287(g) policy that unjustly detains immigrants, he says that “Harris County makes it clear every day that to be black, brown, homeless, or poor is to be a criminal.”

It’s too soon to know when we can expect a ruling on ODonnell’s case.