Gloria Steinem's new show links global instability to violence against women: "For the first time there are fewer females on earth than males" 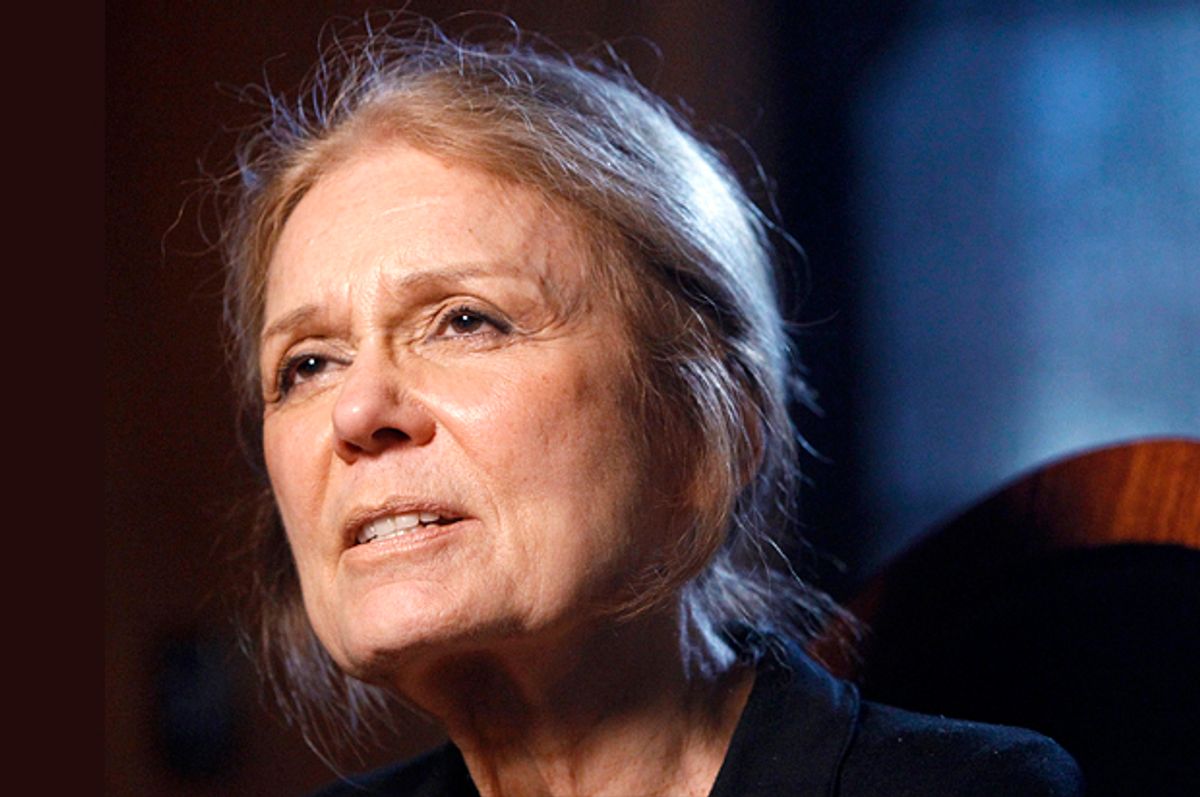 Violence against women is a vast, worldwide problem on a scale that's so big that it's unfathomable to most people who try to get a handle on it. But Gloria Steinem, along with an all-female team of journalists, will not be stopped from trying to raise attention to the issue. Steinem is the host of a new show on Viceland, titled simply "Woman." On the show, she and her team of journalists travel the world, highlighting various stories about women and violence and exploring what this violence means not just for the women themselves, but for the greater world around them.

Here's a look at an upcoming episode on El Salvador:

"Woman" isn't a tedious and depressing chronicle of victimhood, however. Steinem's team focuses heavily on the stories of women as doers: activists, politicians, even soldiers, all of whom are trying to find ways to push back against the oppression women face and create better, more expansive roles for women to embody. I spoke with Steinem about her show over the phone. The transcript is lightly edited for length and clarity.

Let’s start with the show itself. The premise of “Woman” is that you, along with a team of journalists, go around the world to investigate the link between violence against women and global instability. How are these two issues linked?

First of all, we would be doing these shows even if it was not linked. Violence against women is worth reporting in and of itself, even if it were not linked to other violence. But what’s striking is that now research shows, as in the book “Sex and World Peace,” which is where the research is all gathered, that the most reliable indicator of whether or not there is violence inside a country, or whether it will use military violence against another country, is not poverty or access to natural resources or religion or even degree of democracy. It’s violence against females.

And since now, for the first time there are fewer females on earth than males, it was this fact that [Vice CEO] Shane Smith was very struck by and moved by and responded to.

There are fewer females than males?

Yeah. On earth. Not in this country, but on earth. It’s a United Nations study reference.

Yes. That is part of what struck Shane Smith. I have said it to many people, but he responded and said, “We have to do something.”

Is that because of violence?

Yes. It’s adding up all the different kinds of violence. For instance, child marriage is a major cause of death among teenage girls because they have babies too soon, when their bodies are not developed. FGM — female genital mutilation — is also a cause of death, and sexualized violence in warzones, as in the Congo, obviously, but also think about Bosnia and the former Yugoslavia. And in much of Asia there is a son surplus and a daughter deficit because of the premium on having sons, and therefore female babies are often not fed or left to die in one way or another.

And domestic violence here. If you were to add up all the Americans who were killed in 9/11, in two wars in Iraq, and in 14 years of war in Afghanistan, and then you added up all the women who were murdered by their husbands or boyfriends in the same period of time, more women were murdered. So we’ve lost more Americans to domestic terrorism than to foreign terrorism or war in the same period of time.

Your team of journalists on this show is all female. Did it just happen that way or was it a deliberate choice?

You did an episode on the rape crisis in the Democratic Republic of the Congo, where rape is often used as a weapon between warring factions and an estimated 400,000 women are attacked each year. Your team interviewed one woman who has since passed, Rebecca Masika Katsuva, and she set up a sanctuary for rape victims. Why do women who are raped in the Congo need to seek shelter at this sanctuary?

Because they are often rejected by their families and villages. The victim is blamed instead of blaming the criminal. This was true here for a long time too in varying degrees. That is, if a woman was raped, people would say, “Well why was she out late at night? What did she have on? Why did she have too many drinks?” There’s an impulse to blame the victim and what the victim did, because then people, including women, can say, “If I don’t do that one thing, I’ll be alright. I’ll be safe.” It’s not accurate, obviously, but it seems to be a human impulse.

It shows how widespread it is that even in a war zone that is the impulse.

Yeah. And there has been a lot of effort to try to get the president of the DRC to explain that these women are the heroes and the rapists are the villains, but even that has not happened. This is not peculiar to Africa. If you think about the former Yugoslavia and everything that happened in Bosnia, the same thing happened.

Most of us don’t think of Canada as an unstable or violent place, but one of your episodes looks at the massive problem of their women, especially First Nations women, disappearing or getting murdered. What’s going on with the disappearance of women in Canada?

I agree with you that, in some ways, that’s the most shocking show, because Canada has been more enlightened about its policies towards First Nations than the United States has. But it’s still true in both of our countries that indigenous women are the most likely to be sexually assaulted and trafficked. Women from Alaska, often very young girls, are trafficked on boats to Minnesota and other states. So it’s happening here as well. It’s a complicated problem, but it really has to with a lack of alternatives and protections. For instance, in the U.S. the tribal police have no ability to arrest anyone who is not a member of the tribe, so reservations become lawless for people who are not members of the tribe.

One of the most fascinating episodes is about Colombia, which is seeing the end of a 50-year civil war. The rebel groups, called the FARC, have a lot of women that have joined them. Why is FARC so attractive to women? And what’s going to happen to them now that this rebel army isn’t giving them any identity or goals anymore?

So that was exactly why we wanted to do it, because women are what an economist would call “the surplus labor force for the revolution.” So in Algeria, for instance, women were very much part of the revolution that rejected the rule of the French, and during the revolution, women were told that after the revolution there would be equal rights -- but in fact they were put back in a traditional role and and there was a record rate of suicide because of that.

We experienced that somewhat after World War II. Women, during World War II, worked in factories. Factories had child care centers because they needed women as workers, and then as soon as World War II was over they were supposed to return to the suburbs, and childcare efforts were ended.

I'm not suggesting they're all the same, but it's degrees of the same thing. Women's energies and courage and work and fighting are welcome in an emergency, but after the emergency is over then the question is: Do they retain the freedom they fought for?

In an upcoming show you go to Zambia and interview girls who are to be married to older men, including following a 14-year-old preparing to be married to a 48-year-old man. Women conduct an elaborate and ceremonial preparation for the bride. What is that all about?

I think you can see in the episode because it is partly initiating her into understanding sex and also into the necessity of pleasing her husband. You can see that it's partly theological but it's very focused on pleasing him.

I was impressed by how open they seem to be about that with the girls, that it's all about pleasing your husband.

I agree, I agree. But the woman from the government who is talking about the cost to the country of the loss of female talent by removing teenage girls from schools, it's clear that the government is trying to encourage girls to stay in school. That's very positive because it shows the energy of the girls and women themselves saying we're going to change this.

What are your long-term goals with this project?

Well,  first to allow viewers to be a witness, mostly for the sake of the women who are in those countries. You know, when you are suffering, you want to know that you're not invisible. That someone knows. And that really was why people were so cooperative. So first, to allow the women and the girls themselves to be seen and those of us watching to be a witness, and second, to take action. There are, at the end of the shows and online, various ways of making a difference.

I also want to draw attention to the team of journalists we have. You probably have a list of the women correspondents, who are so impressive; these are people who were identified by VICE. I did not know these women beforehand. And they are multilingual, good journalists who ask questions in a way that doesn't indicate what the answer should be.

They are on the ground in difficult circumstances, and I really am so impressed with them. And they themselves come from, you know, one comes from Mumbai and one comes from Italy and they come from a wide variety of countries themselves. It's interesting because, I haven't focused on it before, but I think we should somehow feature these women journalists more, because much of the response or some of the response, is from women who say, "I want to do this, too."