Looking the other way: The accepted sexual abuse of young boys by institutional powers 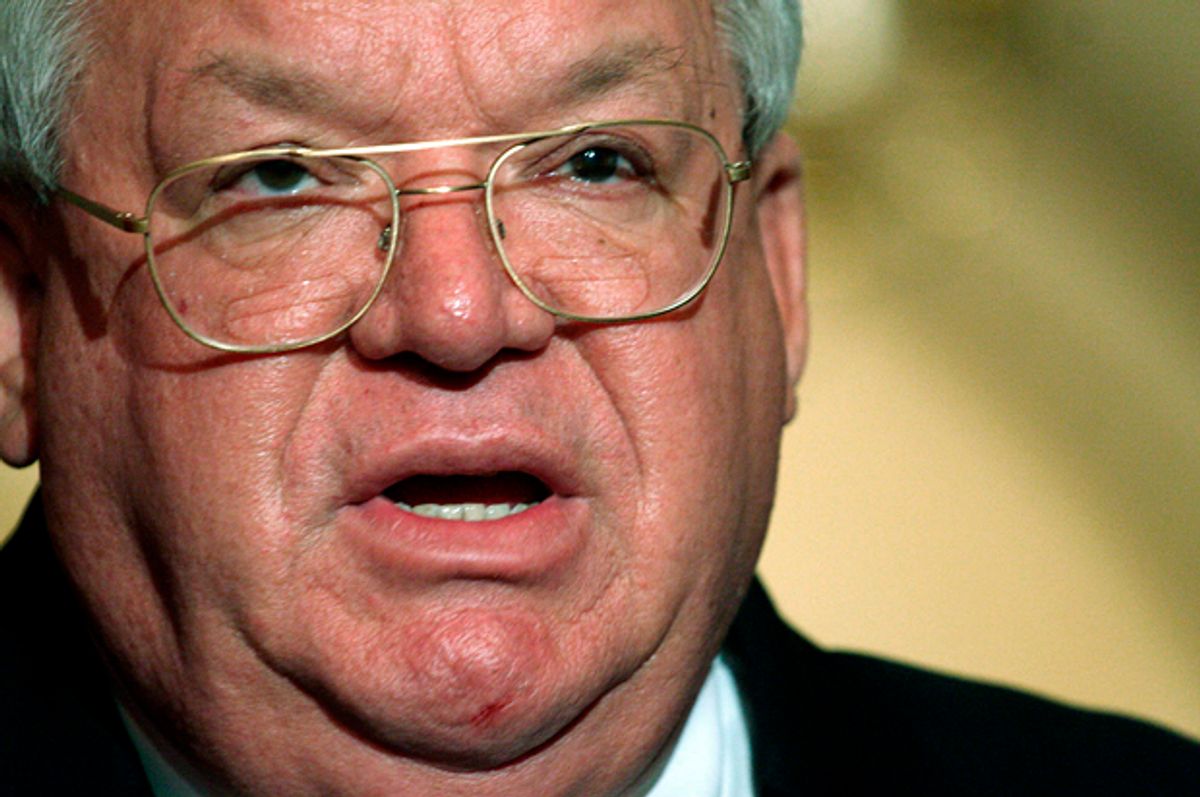 Former Speaker of the House Dennis Hastert begins his prison sentence on June 22. His crime? Payoffs he gave a former athlete he trained. He is not, however, going to prison for his alleged molestation of at least four boys, one of whom was the man he was paying off while he was a wrestling coach.

Thanks to statute of limitations laws, he can't be charged for what prosecutors allege he did to his athletes decades ago. This is, sadly not an uncommon case; the statute of limitation laws regarding sexual assault in the U.S. are in dire need of repair. What is surprising — although it will soon become apparent that it shouldn’t be — is the amount of letters former Republican officials sent to the judge in Hastert’s case, imploring him to go easy when it comes to sentencing.

That prominent members of a political party would come out, sans hesitation, to urge the justice system to go easy on a child predator is gruesome. However, there is ample historical precedent. The rape and molestation of boys and young men in established institutions is rampant and goes uncommented upon more often than not.

The most famous current day example would be the institutionalized rape within the Catholic Church. Far from simply having a few “bad seeds,” the Catholic Church has long harbored pedophiles, protecting them from consequences. Thanks to the patriarchal nature of the church, it is extremely difficult for victims to come forward because they're not speaking out about one priest but instead the entire church structure that backs the priest, a structure that has long held political power across the globe.

Even more convenient is the church’s positions on homosexuality and sex in general, which instill guilt in the young men who are molested by priests. One bishop, Robert Cunningham, even suggested during a deposition that the victims might have been encouraging the priests to go along with it, continuing the idea that the victims might be to blame. Despite calls for his resignation, Cunningham is still the bishop of Syracuse and has faced no repercussions for his words. It remains difficult to imagine Cunningham being able to adequately handle a case of sexual abuse in his diocese after these comments, but the church apparently disagrees.

To this day, the church uses its institutional power to attempt to silence victims. In efforts led by New York Cardinal Timothy Dolan, the church reportedly has paid more than $2.1 million to lobbyists to block sex abuse laws that would help victims. Dolan’s Catholic Conference has argued against this bill by claiming it will cost the church money. That church officials can outright say they are against sex abuse laws simply because it will cost them money and face little to no public pushback goes to show how entrenched the acceptance of abuse is when it comes from institutions.

The Penn State scandal that broke in November 2011 shows an institution in another realm, the sports realm, that has allowed sexual abuse of young boys to go on without comment until the last possible moment. If coach Joe Paterno, who apparently knew of the actions of now convicted sexual abuser Jerry Sandusky, had been an average citizen there is ample reason to believe he would have been ostracized from the community and perhaps even faced charges for looking the other way.

Since Paterno (who died in 2012) was part of a powerful sports organization, he was instead defended, and not just by the institution itself; students at Penn State rioted when Joe Paterno was fired. So accustomed to the power institutional figures hold and so used to a world where members of an institution can get away with anything, the students’ reaction was to push back against one of the rare instances when a corrupt figure went down. If none of the other figures throughout history had to fall, then why should their beloved coach? Let the victims sort themselves out.

Looking at the students who protested Paterno’s firing could cause blood pressure to rise, but their actions are not any different from those GOP members who wrote the letters about Hastert or those in the church, like Dolan, who continue to cover for sexual abuse. The students were merely reacting the way they’ve seen others react, which is by saying, “Stop getting upset; this is how things have always been so don’t blow it out of proportion.”

On the surface, it might seem like there is an easy solution to these problems, at least legislatively. Deny the church its tax exemption status until it gets its act together, punish political parties at the voting booth for covering up sexual abuse, and make it clear that any member, no matter how prominent, of any organization, no matter how powerful, will fall should there be sexual abuse.

But a legislative solution will not soon be coming. After all, the American government has used the tacit approval of institutionalized rape to get away with its own sexual abuse. The release of the 2014 Torture Report that examined the actions done by the CIA to prisoners in Guantanamo Bay shows clear instances of sexual abuse and rape. The reaction to this was muted, to say the least. Even the supposedly liberal Obama administration has shown little interest in exploring what the report means about America and its responsibilities. Worse still, much of the report remains hidden away to this day. More effort is being put into hiding the report than in making sure the occurrences described within it do not reoccur. To the American government, the use of sexual assault is acceptable within certain established institutions; a couple of comments to the contrary do nothing to change this fact.

When the American government itself is willing to look the other way, the message is clear to all: we are willing to put up with this.

Sexual abuse of boys and young men within hierarchies goes back to ancient militaries and institutions. The prevalence of this practices has not gone away. It continues in militaries around the world, including that of the United States, and it is also perpetrated by members of the military on populaces, too, including, once again, by the United States military.

What is worth considering is why young men tend to get targeted inside of these institutions. Outside of them, the risk of being raped for a man is considerably less than it is for a woman (the Catholic Church has long had issues with young women, too). The patriarchal system has long used sexual oppression and sexual violence towards women. What is it then that has allowed the abuse of young men to flourish in one area of society? The answer likely lies in power dynamics. In all of these institutions there is a hierarchical structure that explicitly puts some people above others, and committing consequence-free sexual assault is a very specific and historic way to assert dominance. When you take a look at the institutions in which these practices have been happening, the priesthood, sports, the military, you’re seeing areas that have long been male-dominated; for those in these systems, exposure to young men is constant, making the young men an easy target. Outside of these closed hierarchies, young men are usually at less risk than young women, but within them those who want to assert their power are making do.

It is a bleak outlook right now when one tries to figure out how to put an end to these practices. The Catholic Church continues to escape justice; the Republicans who signed letters defending Hastert have come under little to no fire; the actions of the United States intelligence agencies and military are still met with shrugs by those in power. Because of how deep inside mammoth organizations the perpetrators of these sex crimes are, it is easy for those who commit them to escape. Right now, the best solution is for the average person to stop accepting any and all excuses from powerful hierarchies, to demand that those with any power take action, no matter how upsetting it will be to long-lived institutions; until then, the sexual abuse will continue unabated.

Donald McCarthy is a writer and teacher who lives on Long Island, and you can find more of his works at donaldmccarthy.com