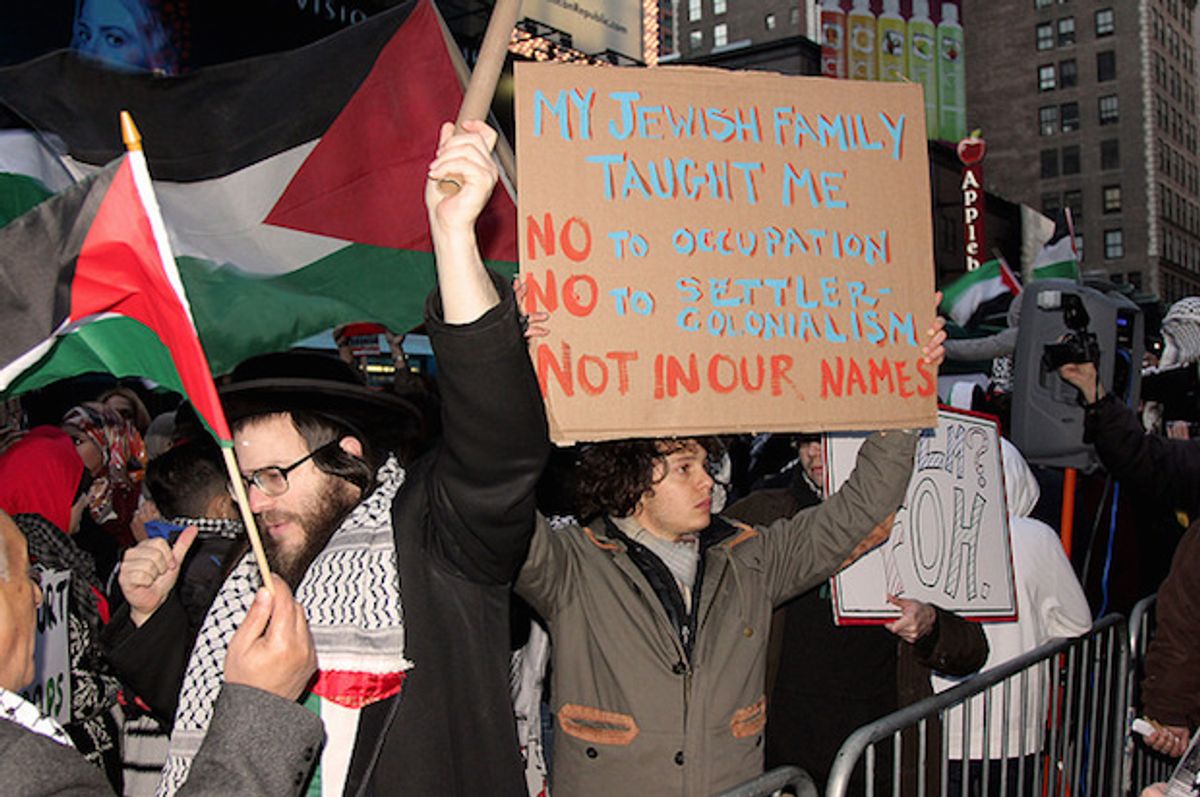 New York Gov. Andrew Cuomo signed a pro-Israel executive order on Sunday that will punish people and groups who support a boycott of Israel on behalf of Palestinian human rights.

Legal experts have described this long pending anti-boycott policy as “21st-century McCarthyism,” warning it would effectively create a discriminatory "blacklist" of Palestinian human rights advocates who endorse boycotts like those organized in order to combat U.S.-backed apartheid in South Africa.

The New York legislature has unsuccessfully tried to push through anti-boycott legislation for months, amid intense pressure by pro-Israel lobby groups. Now it appears that Gov. Cuomo has decided to instead circumvent the legal process and implement the policy on his own.

"I am signing an Executive Order that says very clearly we are against the BDS movement," Cuomo tweeted on Sunday.

"If you boycott Israel, New York will boycott you," he added.

"We made a unity trip to Israel because they were under attack. Today, Israel is under attack on a different level," he tweeted before.

Cuomo then announced that he would be marching in a pro-Israel parade in New York City.

After marching in the pro-Israel parade, Gov. Cuomo signed the executive order "in solidarity with Israel."

Cuomo subsequently retweeted Israeli Ambassador to the U.S. Ron Dermer, who applauded the New York governor for his "strong stance against the BDS movement."

BDS refers to the Boycott, Divestment and Sanctions, an international grassroots movement that promotes nonviolent economic means to pressure Israel to comply with international law and respect Palestinian rights. It was called for by Palestinian civil society in 2005.

It refers to Israel as "a critical and invaluable ally of the United States" and notes "the State of New York and Israel enjoy a special historical relationship and share a commonly forged cultural bond."

The full text of the executive order follows below.

In states throughout the U.S., dozens of bills are pending that would effectively create a blacklist of and punish people and groups who support BDS.

“It’s frightening to think there could be New York state employees scouring the internet for pro-BDS Facebook posts, tweets and news articles, and blacklisting individuals based on their political viewpoints,” Rahul Saksena, a staff attorney at non-profit advocacy organization Palestine Legal, told Salon in January.

“The government cannot punish individuals and entities because of their speech and political views,” Saksena said. "We believe that under a court’s scrutiny, these bills would be found unconstitutional."

In May, an anti-boycott bill pending in the New York senate was pulled, after advocates from New York’s Freedom to Boycott Coalition delivered a letter signed by more than 100 organizations to the Albany offices of all New York state assembly and senate members.

The letter expressed strong opposition to pending bills that would create “unconstitutional blacklists,” adding, “State legislators pushing this McCarthyite, anti-democratic and unconstitutional legislation are out of touch with shifting opinion among growing numbers of New Yorkers and Americans.”

In a statement accompanying the letter, Melanie Trimble, the director of the New York Civil Liberties Union Capital Region chapter, stressed that government policy "punishing New Yorkers for engaging in political speech degrades our state’s values and traditions and violates the Constitution."

“New Yorkers have a long history of bringing about social change through politically-motivated, collective actions like boycotts,” Trimble added.

For months, nevertheless, anti-boycott legislation has remained in the New York legislature. Senate Bill S6378A, whose assembly counterpart A9036 is also in committee, passed the senate and is in committee in the assembly.

This bill, which was sponsored by Republican Jack M. Martins and has bipartisan co-sponsor support, would punish those who boycott Israel but simultaneously allow a boycott of U.S. enemies. It singles out Venezuela as an example of a country Americans could boycott, whose democratically elected socialist government the U.S. helped overthrow in 2002.

Earlier this year, the National Lawyers Guild, the Center for Constitutional Rights and Palestine Legal issued a legal memorandum to New York state legislators in response to the state senate’s vote on S6378A. The legal organizations called the two bills “McCarthyist,” noting they “harken back to the McCarthy era when the state sought to deny the right to earn a livelihood to those who express controversial political views.”

Gov. Cuomo is going around this long pending legislation and pushing through a policy legal groups warn in unconstitutional and discriminatory.

Right-wing pro-Israel organizations like StandWithUs and conservative Christian Zionist groups like Christians United for Israel and Proclaiming Justice to the Nations have organized anti-BDS campaigns, and have called on U.S. politicians to pass anti-BDS legislation.

Social justice group Jewish Voice for Peace, or JVP, has strongly advocated against the anti-BDS legislation. The group’s five New York state chapters, along with the national organization, signed the Freedom to Boycott Coalition letter in May.

“New York may blacklist me for working for justice for Palestinians,” JVP Executive Director Rebecca Vilkomerson wrote in Salon in February. She defended boycotts as “a protected form of political speech” that have a “long history of being an effective tool to pressure the powerful.”

Alana Krivo-Kaufman, JVP East Coast regional organizer, noted that activists' "work for justice and equality for Palestinians follows in the footsteps of other progressive movements for racial and economic justice that have used the tactics of boycott and divestment to create political change."

The National Lawyers Guild, the Center for Constitutional Rights and Palestine Legal also spoke of this long historic precedent in their memo.

They added, “While some may disagree that one or another of those boycotts addressed injustice, just as proponents of these bills presumably disagree with those promoting the Palestinian cause, the law is well settled that participation in and support of such boycotts is a form of political expression fully protected by the Constitution.”

WHEREAS, the State of Israel is a critical and invaluable ally of the United States;

WHEREAS, the State of New York and Israel enjoy a special historical relationship and share a commonly forged cultural bond;

WHEREAS, the State of New York does not support boycott related tactics that are used to threaten the sovereignty and security of allies and trade partners of the United States;

WHEREAS, in 2005, elements of Palestinian civil society issued a call for a Boycott, Divestment and Sanctions (BDS) campaign against Israel, coordinated by the Palestinian BDS National Committee;

WHEREAS, the State of New York unequivocally rejects the BDS campaign and stands firmly with Israel;

WHEREAS, the State of New York will not permit its own investment activity to further the BDS campaign in any way, shape or form, whether directly or indirectly;

(This article was updated after it was published with follow-up tweets from Gov. Cuomo.)