A Clinton-Warren ticket gets closer to reality: Progressives just might get their original dream candidate 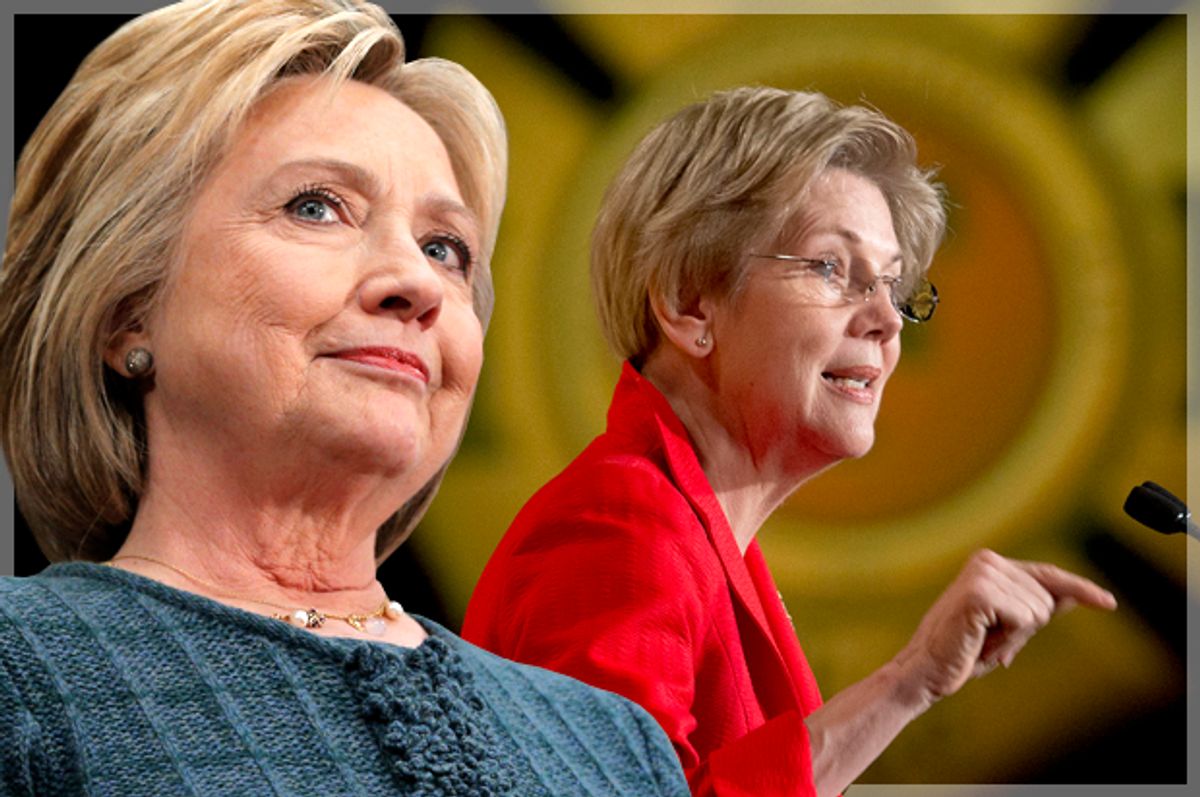 Before Bernie Sanders's launched his political revolution, Elizabeth Warren was the progressive dream candidate. A longtime hero on the left, Warren would likely have won the Democratic nomination had she pursued it. But she declined to run, clearing a path for Sanders instead. Now that Clinton is the presumptive nominee, the Democrats have a problem: The liberal wing of the party – for very good reasons – isn't sold on Clinton as a credible candidate. Competent? Yes. Qualified? Yes. Progressive? Hardly.

Last month, the Huffington Post's Sam Stein reported that Warren was on the short list of potential VP candidates for Clinton. The Massachusetts senator has made headlines with her spirited attacks on Trump. In March, for instance, she posted a lengthy note on Facebook, calling Trump a “loser” who “kept his father's empire afloat by cheating people with scams like Trump University and by using strategic corporate bankruptcy to skip out on debt.”

Warren's jabs caught the attention of the Clinton campaign. According to Stein, “Multiple sources close to the former secretary of state say that her aides took note of the senator's ability to rile the real estate tycoon. And they recognize the value of such dart throwing from, say, someone filling out a presidential ticket.”

The Warren speculation was initially muted because it was assumed that nominating her would leave a vacant Senate seat to be filled by a Republican governor. Given the GOP's narrow majority and the potential of down-ballot victories for Democrats this November, losing Warren was a deal-breaker. Indeed, Senate Minority Leader Harry Reid rejected the idea of Clinton choosing a sitting senator as her running mate as recently as two weeks ago: “If we have a Republican governor in any of those states the answer is not only no, but hell no. I would do whatever I can and I think most of my Democratic colleagues here would say the same thing.”

There may be good news for progressives, however. According to The Boston Globe, Reid is exploring ways to fill Warren's Senate seat should she become Clinton's VP pick. Matt Viser writes: “The upshot of Reid's review is that Senate Democrats may have found an avenue to block or at least narrow GOP Governor Charlie Baker's ability to name a temporary replacement and prevent the Senate from flipping to a Democratic majority if Warren were to leave the chamber. That suggests the issue is not a significant an obstacle as Reid previously feared.”

Note that even the best-case scenario won't ensure that Democrats keep the seat. Ideally, the law would permit Warren to announce her intention to vacate the seat late enough to allow a special election to be held to replace her, and thus prevent the Republican governor from appointing a temporary replacement. While the Democrats would be favored to retain the seat in that case, there are no guarantees. Still, if true, this certainly mitigates the risks involved.

Although she's remained silent, Warren's public rebukes of Trump suggest she's open to joining the ticket, which would explain why she refused to endorse Sanders despite their obvious ideological kinship. Whether or not a Clinton-Warren ticket makes political sense remains an open question. On the one hand, it would galvanize Sanders supporters and help unite a fractured party. The unification argument may be overstated, but it's hard to imagine a Warren nomination not exciting the liberal base, particularly after such a contested primary process.

Detractors like Howard Dean insist Clinton should find a younger candidate. “I strongly believe we ought to have someone under 50 on the ticket,” Dean said. “Ideologically, I think Elizabeth Warren is terrific. I just would like to see a new generation brought into Democratic Party politics.” Something about this objection is off-putting. Bernie Sanders is 74-years-old and he's electrified the base of the party. This election, on the Democratic side at least, is about policies, not optics. Not a single Sanders supporter will denounce Warren on account of her age. Voters aren't worried about a "new generation" - they're worried about a shrinking middle class and a corrupt political system. To suggest a fresh face is more important than fresh ideas is to miss the entire point of Sanders' campaign.

Perhaps Warren isn't the most logical pick at this point. But of all the reasons not to pick her, age is the least important.