An abuse of power like the U.S. has never seen: The White House under President Trump 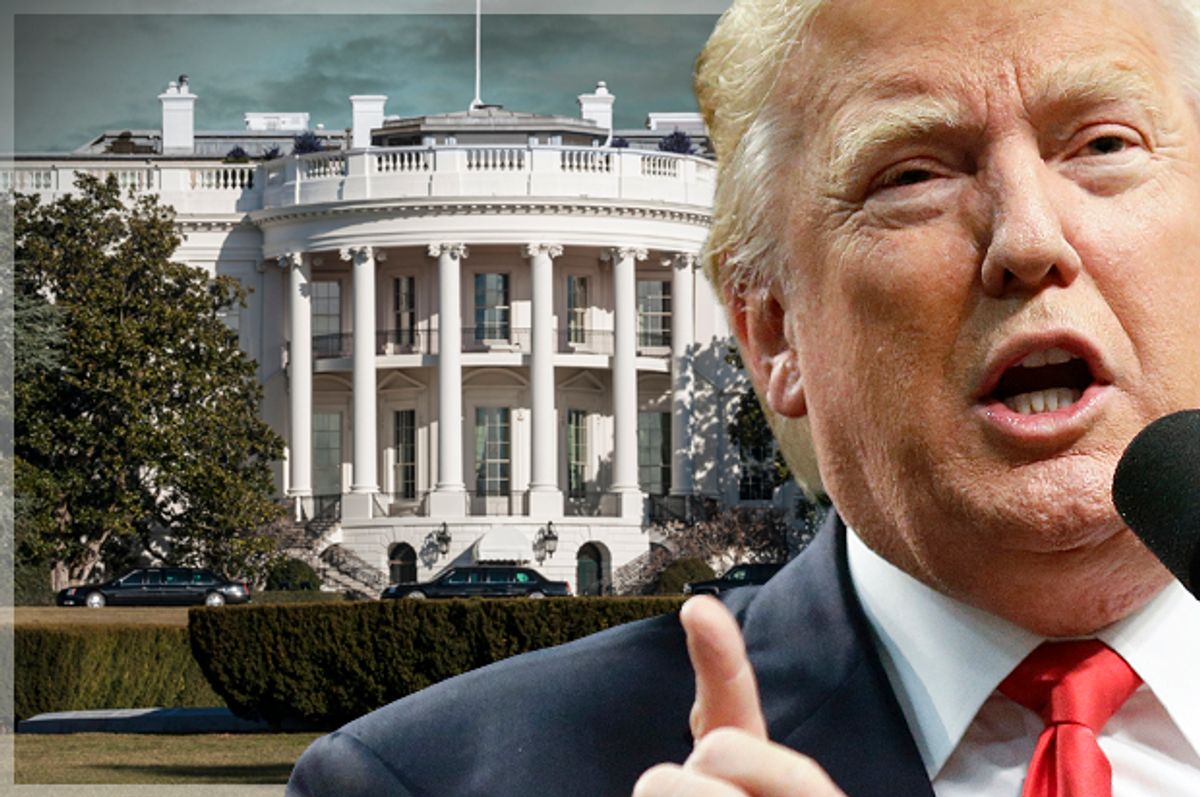 For eight years, Republicans have been excoriating President Obama for allegedly abusing the power of the office. Specifically, they say, Obama has circumvented Congress by issuing a criminal number of executive orders. As many of us already know, Obama has issued an average of 33 orders per year. The last administration to average fewer orders was the first Grover Cleveland White House, circa 1885-1889. But due to the propaganda efforts of Fox News and what David Frum calls "the conservative entertainment complex," Obama's orders are indicative of a severe abuse of power and an impeachable trespass against the Constitution. Unlike everyone else who preceded him.

The irony here is that most of the bubble-nauts who've been attacking Obama for his use of executive orders likely voted for George W. Bush twice and, by proxy, his average of 36 executive orders per year. Today, they intend to further underscore their historical amnesia by voting for circus clown and pathological liar, Donald Trump. Indeed, the most likely criticism we'll hear in the context of a Trump presidency is "abuse of power." We'll also hear the words "executive privilege" and "it's not illegal if the president does it" tossed around -- or in Trump's childish vernacular, "the best words."

It should be obvious to anyone who's been paying attention to the election so far. Trump is nothing if not a thin-skinned King Joffrey Lannister who abuses every established path of recourse available to him. For example, the presumptive nominee for the party that's fought against frivolous lawsuits and in support of tort reform for decades has been involved in more lawsuits than any other presidential candidate in history: 3,500 and counting. He's been the plaintiff in 1,900 of those suits, including one against Bill Maher because the HBO host and stand-up comic (accurately) compared Trump to an orangutan. It's difficult to imagine a lawsuit more frivolous than that.

While discussing the suit, Maher told Conan O'Brien, "The legal system in this country is not a joke. It's not a toy for rich idiots to play with. It's not a collection agency for billionaires." Unless you're Trump, of course. (It's also worth noting that the broader GOP itself has begun to use frivolous lawsuits, due to its legislative impotence, against the Obama White House.)

Among Trump's other lawsuits:

They include Trump's ongoing suit against the town of Palm Beach over airplane noise near his Mar-a-Lago Club and an earlier lawsuit against the town over an 80-foot flag pole. Trump's team argued in court that a smaller flag would understate his patriotism, but he eventually settled with town officials, agreeing among other concessions to lower the pole by 10 feet.

But Trump's fetish for frivolous lawsuits isn't necessarily the primary source of danger in his would-be presidency.

Not too long ago, one of Trump's psychotic yappy-dogs, Roger Stone, who, by the way, has accused Hillary Clinton of engaging in a "war on women," amplifying the meme into a book-length screed, told Breitbart News Daily that Trump will strip CNN of its FCC license when elected. Stone said, "When Donald Trump is president, he should turn off their FCC license. They’re not a news organization; they’re about censorship." And by "censorship," Stone was referring to the fact that CNN banned him for making demonstrably false statements. Regardless, the threat alone could have a dangerously chilling effect on political journalism during a Trump presidency, rewinding the calendar to the Nixon era when the White House exploited the office to settle political scores of all varieties.

On Friday, meanwhile, Trump told a rally crowd in San Jose that he'd order his attorney general to investigate and indict Hillary Clinton.

“You know what, if they do let her get away with it, it will be a big topic of conversation on the campaign trail. I can tell you that, folks. Then if I win, it’s called a five-year statute of limitations. If I win, everything is going to be fair, but I’m sure the Attorney General will take a very good look at it from a fair stand point, okay.”

When was the last time anyone described Trump as “fair?” I mean, other than Trump himself.

Of course, Trump's threat was issued the day after Hillary Clinton emasculated him for 45 consecutive minutes during which the forthcoming Democratic nominee referred to Trump as "unprepared" and "temperamentally unfit to hold an office." Hillary also presented the script for what could turn out to be a scathing "Daisy" style campaign video:

"Now imagine Donald Trump sitting in the Situation Room making life or death decisions on behalf of the United States. Imagine him deciding whether to send your spouses or children into battle. Imagine if he not just had his Twitter account at his disposal when he's angry, but America's entire arsenal. Do we want him making those calls? Someone thin-skinned, and quick to anger who lashes out at the smallest criticism. Do we want his finger anywhere near The Button?"

While we're here, it's impossible to not think about a Trump tweet from 2013 in which he suggested that women in the military are asking to be raped simply because they enlisted — a misogynistic insult that also indicted male members of the armed forces who, apparently, are all rapists.

Nevertheless, as brutal as she was, notice how she never once threatened to sue or to investigate Trump, who surely deserves whatever comeuppance that drops into his pathetically minuscule lap.

What we're witnessing here are super-colossal red flags. Trump will absolutely seize every opportunity to legally or extra-legally punish his political enemies, namely a long list of Democrats and, with them, a longer list of journalists, possibly beginning with Univision's Jorge Ramos and, as Roger Stone hinted, the entire CNN organization. Given how he's floated the idea of nominating Benghazi witch-hunter Trey Gowdy as attorney general, it wouldn't be surprising. We can also expect that if his attorney general fails to abide and pursue Trump's dictatorial mandates, Trump will merely pull a Nixon-style "Saturday Night Massacre," in which he simply fires and replaces one attorney general after another until he lands on one that'll do his bidding.

And then, both Democrats and Republicans will long for the days of Barack Obama and, yes, George W. Bush.