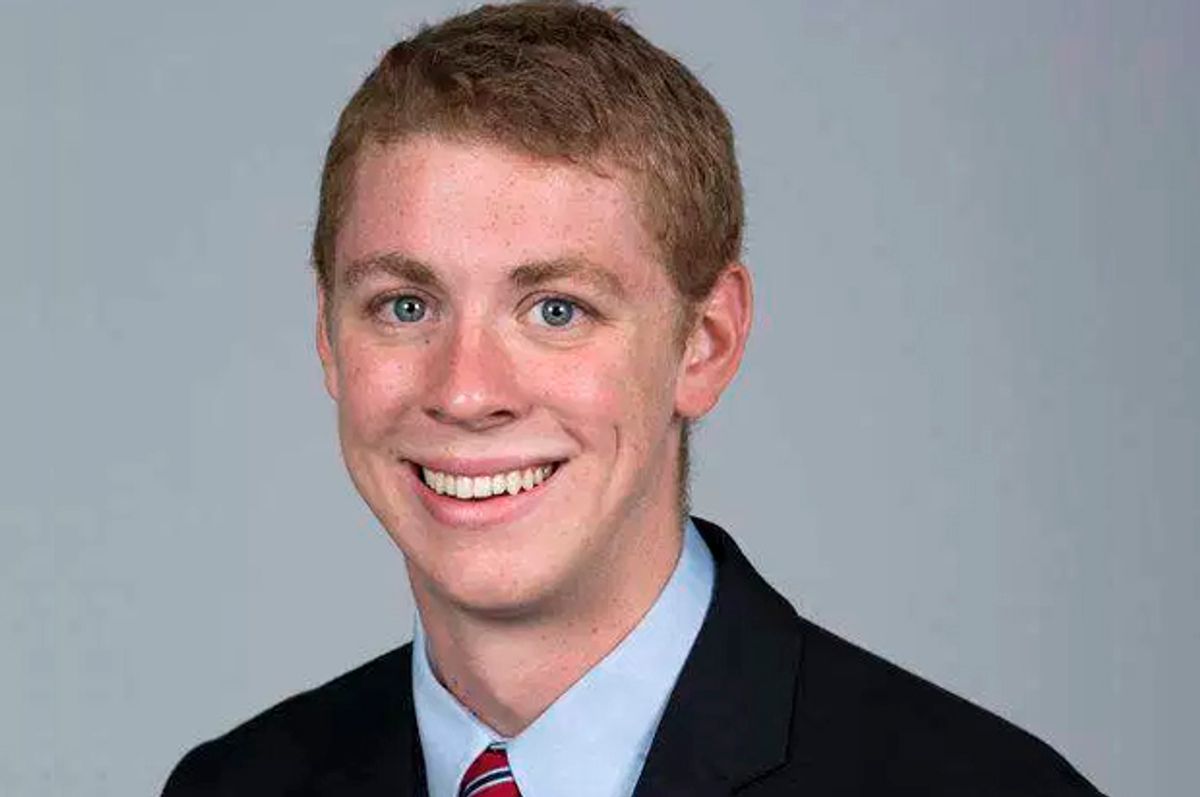 Here is how Brock Turner's father describes his son: "very gentle and quiet." Here is how he describes what Turner did, in January of 2015, to an unconscious young woman: "20 minutes of action." But here's what the justice system calls him: A convicted felon. Here's what he will someday become: A registered sex offender. And here are some very specific words about he's now convicted of: Assault with intent to commit rape of an intoxicated or unconscious person. Sexual penetration of an intoxicated person. Sexual penetration of an unconscious person.

Last week in California, Judge Aaron Perksy sentenced the former Stanford student — whose once promising swimming career has been repeatedly trotted out in the press coverage of the case — to six months in county jail and probation for his actions, saying, "A prison sentence would have a severe impact on him… I think he will not be a danger to others." In response, Turner's unnamed victim issued a lengthy statement directly to him that she then shared with Buzzfeed. In it, she describes how she went to a party with her sister, and "drank liquor too fast." The next thing she recalls is waking up on a gurney in a hospital, and that, later, "I read that according to him, I liked it. I liked it." She writes that "He has done irreversible damage to me and my family during the trial and we have sat silently, listening to him shape the evening. But in the end, his unsupported statements and his attorney’s twisted logic fooled no one. The truth won, the truth spoke for itself. You are guilty…. He is a lifetime sex registrant. That doesn’t expire. Just like what he did to me doesn’t expire, doesn’t just go away after a set number of years. It stays with me, it’s part of my identity, it has forever changed the way I carry myself, the way I live the rest of my life." The letter has been viewed nearly five million times.

But now another letter has been making the rounds — one written to the judge by Dan A. Turner, Brock's father. In it, he says he is son is "truly sorry for what occurred," has remorse for "his actions," had "never been violent to anyone including his actions on the night of January 17th, 2015," and, most staggeringly, that "His life will never be the one that he dreamed about and worked so hard to achieve. That is a steep price to pay for 20 minutes of action out of his 20 plus years of life." The poor young lad, according to his father, also is no longer enthused about eating "a big ribeye steak" and now "eats only to exist."

Mr. Turner understandably wants mercy for his own child. But doesn't seem to wonder what it's been like for the woman he harmed, a woman who has written that "My independence, natural joy, gentleness, and steady lifestyle I had been enjoying became distorted beyond recognition. I became closed off, angry, self deprecating, tired, irritable, empty." He doesn't even say what his son did, referring to a sustained sexual assault as merely an "action."

Last week, the Mercury News' Scott Herhold offered a similar argument, lamenting that "It's hard to review this case without concluding that it has roots in a culture of campus drinking, the unindicted co-conspirator here" and that "there is a temptation to see the Turner case as a chance to send a message, rather than to weigh all the messy human elements involved," because Turner's sentence "effectively closes many career avenues. It's a permanent blight."

Yet as Turner's victim herself explains, "Alcohol was not the one who stripped me, fingered me, had my head dragging against the ground, with me almost fully naked….Regretting drinking is not the same as regretting sexual assault. We were both drunk, the difference is I did not take off your pants and underwear, touch you inappropriately, and run away."

This is what, unfortunately, needs to be said again and again. Lots of people drink to excess and manage to not assault anybody. And there's no time constraint on committing a horrible crime. You can end a life with a bullet in a fraction of a second. You can severely damage a body with a series of blows in less than a minute. And in twenty minutes, a person can push out a baby, cross a finish line, go from single to married, blow up a building, torture a political prisoner. Or, in Turner's case, take another person's security and dignity. Twenty minutes was enough time to permanently change one woman's life. But I'll agree with Dan Turner on this — the fact that his son now only faces six months of jail does indeed prove that for some things, the given span of time is much too short.