In attack on Trump, Clinton accidentally admits drone killing of Abdulrahman al-Awlaki may have been a war crime 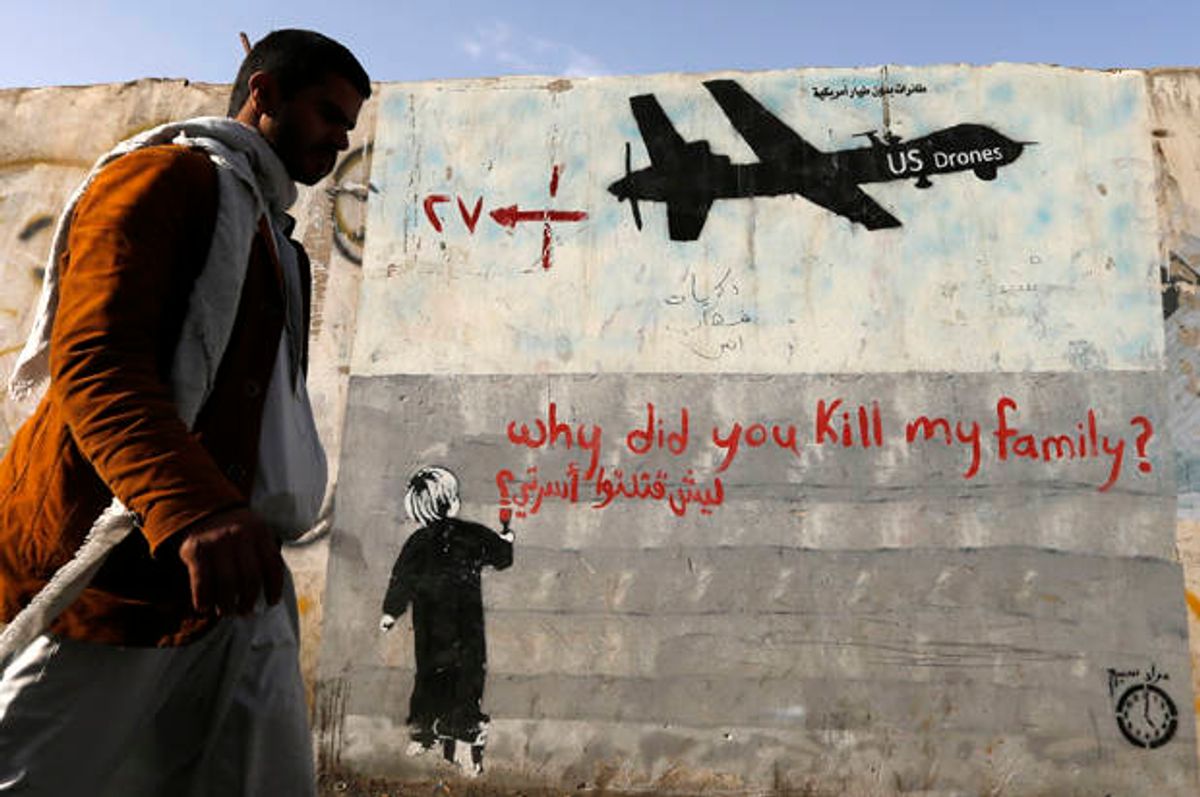 Clinton blasted Republican presidential front-runner Donald Trump for saying "he would order our military to carry out torture and the murder of civilians who are related to suspected terrorists — even though those are war crimes."

Yet, while she served as secretary of state, Clinton's own U.S. government administration may have overseen the very atrocity that she accidentally acknowledged is a war crime.

Hundreds of civilians, many of whom were innocent family members of suspected militants, have been killed in U.S. drone strikes in Yemen, Pakistan, Somalia and more. If any of these killings were intentional, they were war crimes.

As Gabor Rona, a professor of the law of armed conflict at Columbia Law School, explained in a message to Salon, international law makes a distinction between intentional and unintentional killings of civilians.

But Clinton said that the "murder" of civilians is a war crime, not just the "killing." Rona noted he's "sure that her choice of terminology was deliberate and vetted by lawyers."

If the Obama administration intentionally killed family members of suspected terrorists in drone attacks, that constitutes murder, not just a killing, and is a war crime.

This brings up the most prominent example of family members killed in U.S. drone strikes: that of the al-Awlakis.

On Oct. 14, 2011, a U.S. drone strike killed 16-year-old U.S. citizen Abdulrahman al-Awlaki, along with his teenage cousin and at least five more civilians, blowing them up as they ate dinner at an outdoor restaurant in Yemen.

Why did the U.S. kill a teenage U.S. citizen in a country where it is not officially at war? Years of investigation by an award-winning journalist suggests that it may have been an intentional killing — not because Abdulrahman was involved in terrorist activity, but rather because his father, Anwar al-Awlaki, was a propagandist for al-Qaeda in the Arabian Peninsula.

That is to say, using Hillary Clinton's own language, President Obama may have overseen "the murder of civilians who are related to suspected terrorists — even though that's a war crime."

Anwar al-Awlaki was assassinated by another CIA airstrike on Sep. 30, 2011, just two weeks before his son was killed. He was never given a chance in court, despite the fact that he was a U.S. citizen. He was killed extrajudicially, without a sliver of due process.

After Abdulrahman and his cousin were killed, U.S. officials leaked the story to the press, claiming he had been 21-years-old. Yet his family had his birth certificate, which proved he was 16 and had been born in Denver, Colorado.

Then they claimed Abdulrahman was linked to Ibrahim al-Banna, an Egyptian member of al-Qaeda in the Arabian Peninsula. Award-winning journalist Jeremy Scahill, who spent years investigating the killing, interviewing U.S. officials, speaking to Abdulrahman's family and friends and poring over government documents, concluded otherwise, noting, "There is not a shred of evidence to indicate that this boy had anything to do with terrorism whatsoever."

The U.S. claimed that it did not intentionally target Abdulrahman, but a former senior official in the White House told Scahill that CIA Director John Brennan suspected that the teenager had been killed "intentionally."

If this killing was intentional, as Brennan allegedly suggested, it constitutes precisely the kind of war crime Hillary Clinton warned Donald Trump might carry out.

Scahill likened the killing to a "precrime," a concept from the dystopian science-fiction story "Minority Report," in which citizens are arrested because they will potentially commit a crime in the future.

"U.S. airstrike that killed American teen in Yemen raises legal, ethical questions," read the headline of the Washington Post report a week after the killing.

No one in the Obama administration, Pentagon or Congress was willing to take responsibility for or even publicly acknowledge Abdulrahman's death in the wake of his killing. They clearly understood that the killing of teenage children of U.S. citizens who were also extrajudicially killed is not a good look.

"The absence of official accountability for the demise of Abdulrahman al-Awlaki, a Denver native and the son of an al-Qaeda member, deepens the legal and ethical murkiness of the Obama administration’s campaign to kill alleged enemies of the state outside of traditional war zones," the Post wrote.

“If the government is going to be firing Predator missiles at American citizens, surely the American public has a right to know who’s being targeted, and why,” the deputy legal director of the American Civil Liberties Union, Jameel Jaffer, added.

After the killing, Scahill spoke with an operative with Joint Special Operations Command, or JSOC, the secret elite U.S. special operations unit that carries out the drone program, who was in Yemen at the time working on the strike. The man wouldn't tell Scahill any of the details, but Scahill asked him, "How did you feel when you saw that this teenage American citizen had been killed?" The JSOC operative told him, "Well, there’s a reason I’m not doing this anymore."

"My grandson was killed by his own government," Nasser al-Awlaki later wrote in an op-ed in The New York Times. "The Obama administration must answer for its actions and be held accountable."

Clinton may fearmonger about a potential President Trump extrajudicially killing U.S. citizens, but the Obama administration, in which she proudly served as secretary of state, may have already established this precedent.

If a hypothetical President Trump insists the U.S. must extrajudicially assassinate dissidents, he has a drone program that can do so.

This — in conjunction with the Obama administration's record-breaking arms deals, deportations, mass surveillance, crackdown on whistleblowers and more — simply continues to demonstrate how, despite how much Democratic elites may wag their bloodstained fingers at Trump, the status quo of the Democratic Party is Trumpism Lite.

(This article was updated after it was published with more explanation on the nuances of what is considered a war crime under international law.)