"Me Before You"’s controversial end: Criticism mounts for story of quadriplegic man and his "interesting" fate 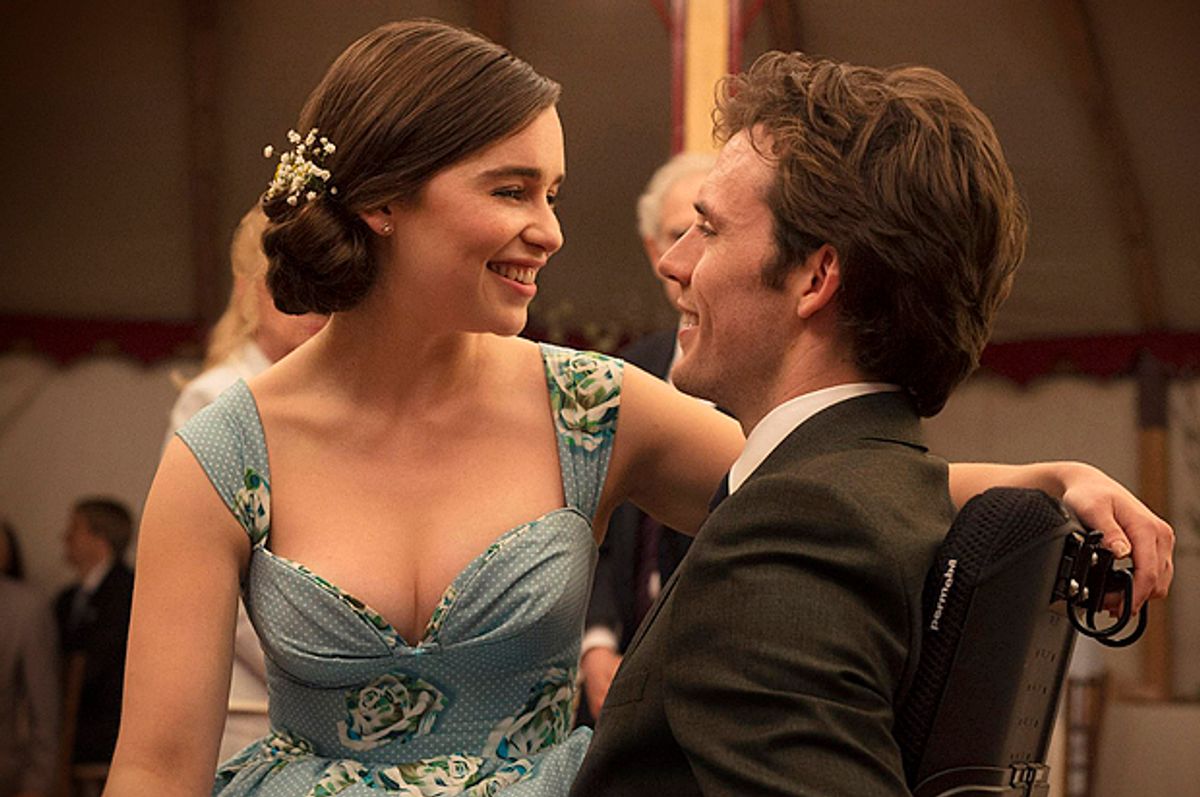 This story contains spoilers for the book and film "Me Before You."

"This way… this is the more interesting way." That's how director Thea Sharrock describes the resolution of "Me Before You," the romantic tearjerker that's become one of the most controversial films of the year. And if by "interesting," you mean a story that seems to suggest that committing suicide is a totally reasonable response to becoming quadriplegic, well then, sure.

Sharrock has been facing intense criticism this spring, as the film has garnered more attention for its alarming central plot point than the fictional romance between its two attractive young stars, Emilia Clarke and Sam Claflin. Based on Jojo Moyes' successful 2012 novel, it tells the story of the fetching caretaker Louisa Clark and her charge, the rich, charismatic Will Traynor. An accident two years prior has put Traynor in a wheelchair, and now he has made the choice to put a time limit on his life and then end it. As he says in the film, "I can’t be the sort of man who accepts this." Writing in the New York Times three years ago, Liesl Schillinger called it "a story of the bravery and sustained effort needed to redirect the path of a life once it’s been pushed off course" and observed, "Lou has never fully lived; Will has, but no longer can," calling Will "nobody’s idea of a leading man."

Yet it wasn't until the trailers for the film adaptation began appearing in theaters that the questions of how the story portrays people with disabilities began to reach a crescendo. Earlier this month, activists picketed the film's opening, and on Twitter, outraged users demanded, "Fight cripple snuff films." Writing in The Guardian, Ryan Gilbey observed tartly that Will's directive to Lou to live more fully "applies in this context only to the able-bodied," saying that "This movie which has stood proudly behind Will’s decision to die seems in an awful hurry to conceal what that might entail. Death, like disabled people who choose to live boldly, is nowhere to be seen."

Now, in a series of interviews and statements, director Sharrock has defended her first film, saying, "It has big themes in it that are very easy to make quick judgments on…. It’s a fictional story about how important the right to choose is. The message of the film is to live boldly, push yourself, don’t settle."

But EW also articulates another crucial aspect of the film — it follows the plot of the book. EW quotes an earlier interview in which Sharrock observes, "You can’t do it. Can you imagine it coming out now and we would be saying, 'It’s exactly like the book. It’s just we have this whole new taking on the ending. This is a brave ending. It’s too easy to do it the other way. We could all tell that story tomorrow. But this way… this is the more interesting way." And she adds, "It’s interesting to me that the controversy has been much more so then what Jojo ever got for the book. I guess that says a lot about movies and how out there they are in comparison to books."

It's more than fair enough to say that if you've signed on to make a movie based on a hit book, you want to stay true to the book. It's fair to say that if said book is about a man who chooses to end his life, it would be a very serious about-face to make him suddenly have an about-face. You can argue whether this film should ever have been made (in fact, please do), but it is trickier to argue that it should have been made dramatically different from its source material. Yet writing last month in Salon, Emily Ladau noted, "Exploiting disability as a plot device tends to be a pretty common theme across media outlets because it virtually guarantees strong emotional reactions…. In far too many cases, non-disabled writers and filmmakers seem to have no qualms about reducing disabled characters to victims or sources of inspiration (referred to as 'inspiration porn')."

The choice of one fictional character is not meant to be a blanket suggestion for an entire community. But when there's little to no other representation of similar characters on television and film, it's hard for that single character to not bear the weight of a whole population. So imagine if, in the time since the book appeared and the movie was made, the filmmakers had conversations with different disability rights organizations and advocates, and considered even the option of telling a different kind of story. But it appears that didn't happen — just like nobody gave Sam Clafin the memo about choosing better language to describe his character's condition than "confined to a wheelchair." The creative team can now simply plead faithfulness to a beloved novel instead of curiosity or ambition about doing something more. And though the filmmakers may insist they made the movie they had to make, it's pretty clear audiences are saying they're making their own choices now too — to put their movie dollars somewhere else.