The politics of bigotry: Donald Trump and the rise of white racial victimhood 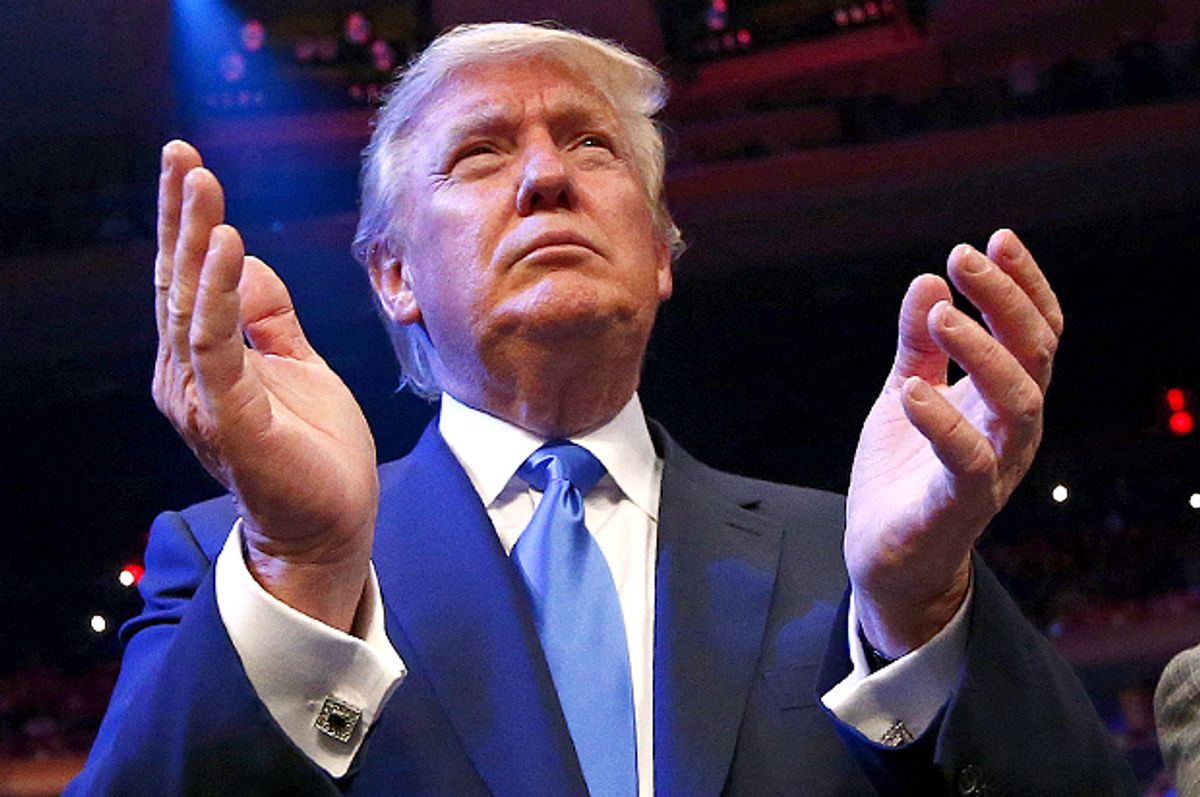 “Bully,” “Fascist,” sexist,” “man-baby,” all are phrases hurled at Donald Trump by pundits and commentators of late, as Trump continues his unlikely march to the Republican nomination. Trump, in turn, denounces the media at every turn, calling an ABC news reporter a “sleaze” at last Tuesday’s news conference.  Lost in this sea of insults, though, is a central dynamic behind Trump’s surprising success: Critiquing his personality or contradicting his claims with facts ironically fuels his very appeal, which is grounded in a kind of professional victimhood. Rather than focusing on Trump’s personality, we do better to consider the deep historical roots to his race-based appeals to white voters.

When Trump called Mexican immigrants “rapists” and initially refused to condemn the Ku Klux Klan, he offered voters a toxic mixture of victimhood and pugilistic rhetoric tinged with nostalgia for a violent, unapologetically racist past: “We’re not allowed to punch back anymore. I love the old days,” stated Trump at a Las Vegas rally last February. When a Black Lives Matter protester interrupted the same speech, Trump quipped “I’d like to punch him in the face, I tell you!”

Trump’s romance with a history of explicit racism and violence against black and brown bodies most immediately evokes George Wallace.

Wallace, the crusading white segregationist who broke with Democratic Party leaders in 1964 and again in 1968, opened the door to the Republican Party’s successful “southern strategy” over the past half century.  “Wallace is the only guy…who is telling it like it is,” wrote one white Wallace supporter in 1968, “We’re tired of getting pushed around.”

Nixon was hardly the first political actor to benefit from this toxic stew of white victimhood and rage at an establishment that had allegedly betrayed them. When the KKK organized resistance to African American voting rights during the nation’s first Reconstruction, they justified their attacks on black Republicans as a defense of white womanhood. Adolph Hitler similarly portrayed himself as a racial victim, campaigning against “white slavery ” in 1931, asserting Aryan women were being raped and enslaved by Jewish men.

Purveyors of white victimhood have not only used it to justify violence against people of color, though. They also suggest that racial progress is a zero sum proposition.  If people of color gain, whites must, logically, be the losers. This zero-sum notion explains why whites today are more likely than blacks to claim they have experienced racial bias because of their skin color.  That sense of white victimhood has grown sharply since 2008, when Barack Obama became president, despite the growth in wealth disparity between white and black Americans during that same period.

How might citizen-critics of all colors use history to answer Trump’s summoning of white victimhood? First, focusing on identity politics may backfire. Such an approach valorizes individual victimhood as the basis for activism, as Nathan Heller’s recent New Yorker article about student campus protest suggests.  Fighting racially insensitive language by insisting it hurts individual students might change young hearts and minds at universities.  But using racial victimhood to out-victim Trump is a losing proposition. For white victimhood has historically been extraordinarily elastic, resistant to facts or evidence of enduring white privilege and power.

The best antidote to claims of white victimhood is the actual history of racial progress in America, which has never been a zero-sum story. Historical struggles for racial and economic justice have benefited all citizens, white and non-white alike, strengthening our collective stakes in public goods like living wages, voting rights and public education.

When black and white workers organized the CIO in the late 1930s, they not only increased wages and workplace rights for all industrial workers, but became some of the first Americans to challenge Jim Crow segregation in the U.S. South.  When black civil rights activists opened their ranks to white allies and together passed the Civil Rights Act of 1964, not only black Americans benefitted, but any citizen experiencing discrimination in the workplace.

When Donald Trump calls Mexican immigrants “rapists,” he ignores the fact that immigrants, African Americans and working people of all backgrounds helped build this great nation. They did so not as professional victims like Trump, but as idealists whose resilience in the face of bigotry and violence gave renewed purpose to our Democracy.

Myths of white victimhood, by contrast, have historically hurt people of color and poorer whites simultaneously, who alike lost access to public schools, voting rights and workplace freedoms. In the aftermath of the Wilmington Riot of 1898, when North Carolina Democrats used threats to white womanhood to restore so-called “white supremacy,” state funding for public schools fell dramatically and many poor whites struggled to pay poll taxes.

Sharp denunciations of Trump’s personality or displays of racial victimhood by Hispanic or black voters might channel anger against a polarizing figure like Trump. But it will take cross-racial coalitions dedicated to building a more perfect union to defeat him.

Gunther Peck is an associate professor of history and public policy at Duke University. He is completing a book titled “Trafficking in Race: White Slavery and the Birth of Modern Whiteness, 1660-1860.”